In his speech Tuesday night, Barack Obama claimed the mantle of presumptive Democratic nominee and began his general election campaign in earnest. 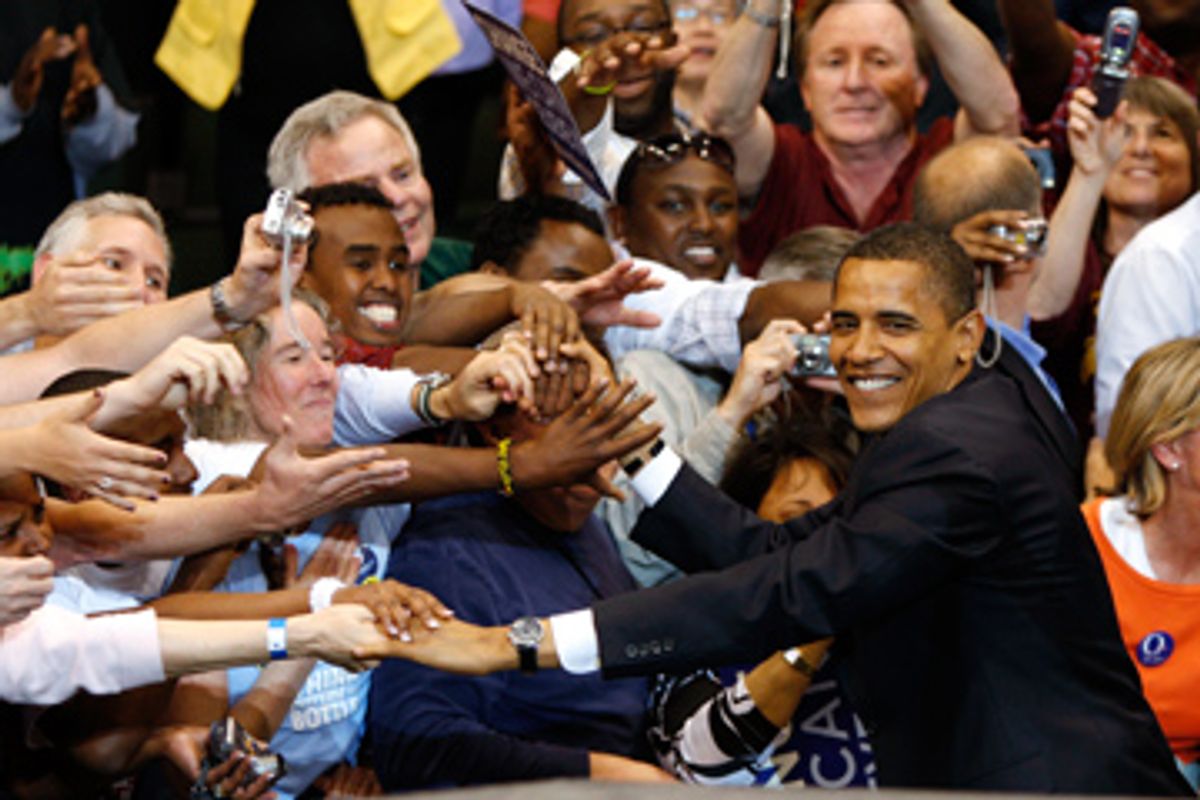 Barack Obama didn't waste much time basking in his victory in the Democratic primary campaign tonight. He thanked his staff, he thanked his grandmother, he thanked the millions of people who voted for him, "from the snows of Cedar Rapids to the sunshine of Sioux Falls." And then he launched right into the first true battle of the general election campaign against John McCain.

"In just a few short months, the Republican Party will arrive in St. Paul with a very different agenda," Obama told 17,000 people at the Xcel Energy Center (and, the campaign said, another 15,000 outside), where McCain's GOP convention will be held in September. "They will come here to nominate John McCain, a man who has served this country heroically. I honor that service, and I respect his many accomplishments, even if he chooses to deny mine. My differences with him are not personal; they are with the policies he has proposed in this campaign. Because while John McCain can legitimately tout moments of independence from his party in the past, such independence has not been the hallmark of his presidential campaign."

McCain, in his own speech earlier in the night, had gone after Obama, pitching himself as the real agent of the change the country needed. Obama -- whose speechwriters appeared to have digested McCain's speech well in advance, as reporters received Obama's prepared text while McCain was still speaking -- answered right back. "There are many words to describe John McCain’s attempt to pass off his embrace of George Bush’s policies as bipartisan and new," Obama said. "But change is not one of them."

Like McCain, Obama praised Clinton's campaign, acting as if she'd conceded the race in her own remarks just before and fast-forwarding ahead to a future where the Democratic Party is united. "What gets Hillary Clinton up in the morning -- even in the face of tough odds -- is exactly what sent her and Bill Clinton to sign up for their first campaign in Texas all those years ago; what sent her to work at the Children’s Defense Fund and made her fight for health care as First Lady; what led her to the United States Senate and fueled her barrier-breaking campaign for the presidency -- an unyielding desire to improve the lives of ordinary Americans, no matter how difficult the fight may be."

But as much as Obama focused on parrying McCain's speech, he also pivoted into a powerful, and classic Obama, call for uniting the country. He said the more than 30 million people who voted in Democratic primaries didn't do so because of himself or Hillary Clinton. "You did it because you know in your hearts that at this moment -- a moment that will define a generation -- we cannot afford to keep doing what we’ve been doing," he said. "We owe our children a better future. We owe our country a better future. And for all those who dream of that future tonight, I say -- let us begin the work together. Let us unite in common effort to chart a new course for America."

He claimed he'd run a campaign that was different from the divisive politics of the past. "What you don't deserve is another election that's governed by fear, and innuendo, and division," Obama said. "What you won't hear from this campaign or this party is the kind of politics that uses religion as a wedge, and patriotism as a bludgeon -- that sees our opponents not as competitors to challenge, but enemies to demonize. Because we may call ourselves Democrats and Republicans, but we are Americans first."

The talk of unity, and the ringing crescendo toward the end ("America, this is our moment. This is our time. Our time to turn the page on the policies of the past") echoed the speech he gave at the 2004 Democratic National Convention, which announced his arrival on the national political scene before he had even won election to the Senate. Now, less than four years later, he will almost certainly be the party's nominee.