Who will Obama choose as veep? Nope, you're wrong

From Webb to Strickland, there are many names bouncing around the blogosphere. If history serves, it will be none of the above. 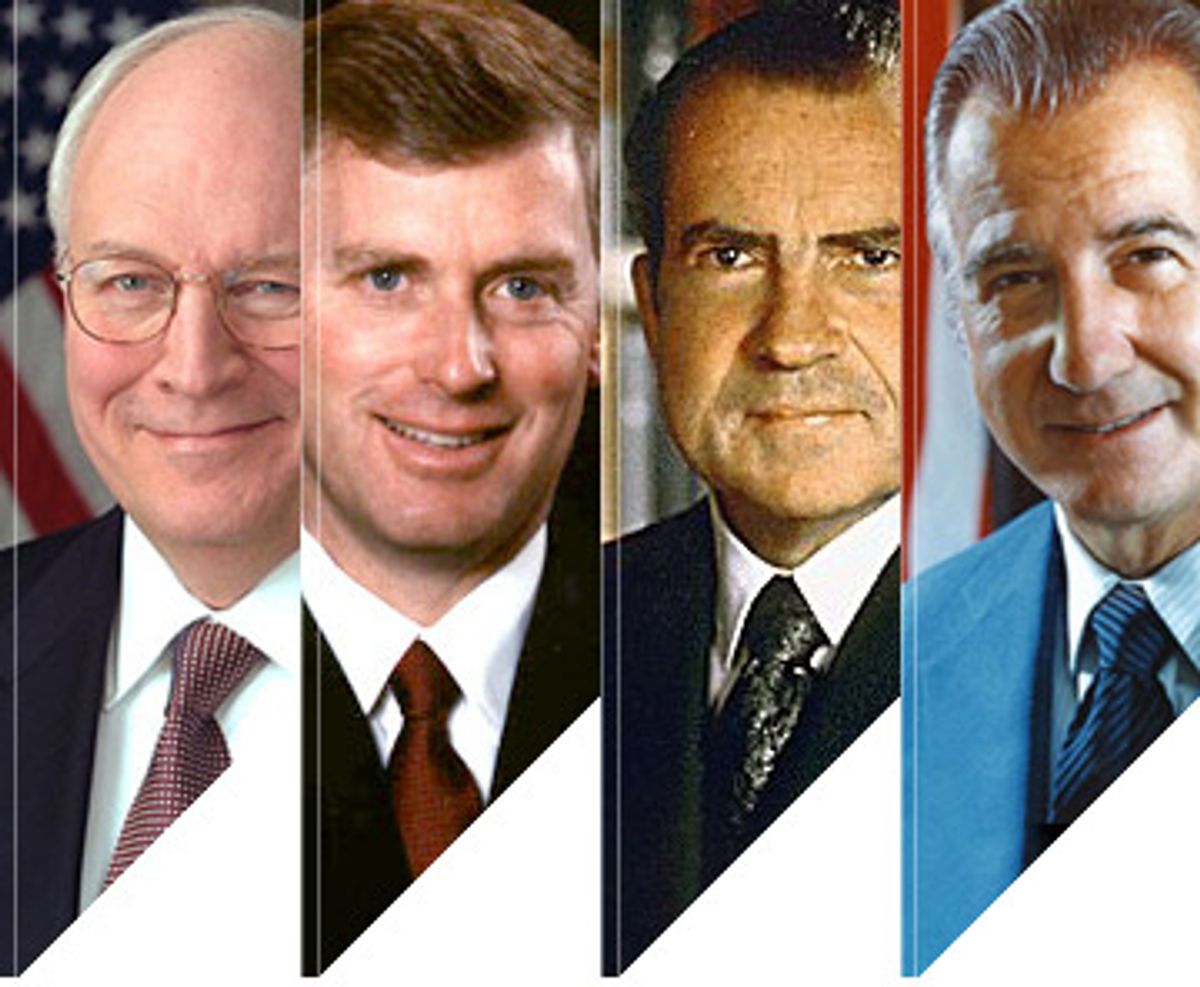 If the primaries resembled a marathon dance competition that only ended when the last Montana voter dropped, then the upcoming veepstakes is more akin to a game of Clue played wearing earplugs and blindfolds. Everyone has an opinion and has heard a rumor -- from those chattering on cable TV to those installing it -- but tangible evidence is invariably in short supply.

So will it be Hillary Clinton at the Naval Observatory with a consolation prize? Virginia Sen. Jim Webb bathed in confetti in Denver with the macho vote? Sen. Claire McCaskill in Independence bragging about the last vice president (Harry Truman) to hail from Missouri? Or Gov. Ted Strickland proving that the swing state of Ohio is now the "mother of vice presidents"?

There is a good chance that Barack Obama's ultimate pick for the heartbeat-away job will not be on this list. And John McCain's vice-presidential deliberations are bathed in uncharacteristic secrecy on the no-talk express. Nothing better illustrates the folly of trying to get ahead of the story than the New York Post's front-page banner headline ("KERRY'S CHOICE: Dem Picks Gephardt as VP Candidate") just as the 2004 nominee was tapping John Edwards.

Far harder to handicap were the eccentric 2000 selections in both parties. A Nexis search for June 6, 2000, failed to discover a single reference to Joe Lieberman as Al Gore's putative running mate. Dick Cheney -- then supposedly the selfless chairman of George W. Bush's V.P. selection committee -- only came up when Andrea Mitchell asked Sen. Chuck Hagel on MSNBC, "Have you had your interview with Dick Cheney yet?"

The selection of a vice-presidential nominee is potentially the most important un-democratic election in the world, though Vladimir Putin might disagree. There is only one voter in each party -- and he certainly does not answer pesky questions from pollsters. The entire closed-doors decision-making process would be familiar to members of the Central Committee of the Chinese Communist Party. And the amazing thing about this traditional exercise of the divine right of presidential nominees is that nobody in America objects.

This has been a year when Democrats have been hyper-vigilant about any perceived deviation from voter sovereignty. The 796 unelected superdelegates to the Denver Convention were depicted (until they belatedly broke for Obama) as the tobacco-free Whole Foods heirs to the cigar-smoking bosses in Thomas Nast cartoons. A fetish developed around the legally meaningless total vote calculations from the primaries on the RealClearPolitics Web site.

A major justification for democracy lies in the wisdom of crowds, the notion that the electorate, despite its occasional pratfalls (see the 2004 election results), generally gets things right. But when power resides in a single individual, whose judgment is supreme, that is when things go awry. A classic example is George H.W. Bush's impulsive selection of (drum roll, maestro) Dan Quayle as the 1988 veep nominee. As acclaimed Associated Press political reporter Walter Mears writes in his memoirs, "Deadlines Past," "Bush's surprise choice, I believed, was intended to prove he was his own man, not beholden to the opinions of ... his own campaign advisers." With that wave of a whim, Bush foisted on the nation a vice president who could not even spell potato.

Ever since Dwight Eisenhower vaulted a heavy-bearded, Commie-hunting young California senator named Richard Nixon onto the 1952 ticket, some of the veep picks should make the voters long for Alexander Throttlebottom, the clueless No. 2 in the Gershwins' "Of Thee I Sing." Tricky Dick returned the favor by anointing Spiro Agnew in 1968, who in his addiction to accepting cash payoffs in fat white envelopes made Nixon seem a tower of integrity in comparison.

Almost half the time over the last 40 years, in fact, the vice president has been a national embarrassment -- or worse. For the last seven and a half years, we have had a power-hungry megalomaniac, radiating visible contempt for democratic norms, as our vice president. Throw in Mr. Potato Head (Quayle) and Spiro Our Hero and you end up with quite a rogues' gallery. The losers take some explaining as well, from Tom Eagleton (who was driven from the 1972 Democratic ticket when it was discovered that he had received electroshock treatments as a mental patient) to Geraldine Ferraro (who embarrassed Walter Mondale by not revealing her husband's shady real-estate dealings before she was named as his 1984 V.P. choice). And with each passing day, Joe Lieberman seems to have been an increasingly incongruous running mate for Al Gore in 2000.

A far more democratic way of choosing a vice president would be to leave the decision to the convention itself. This gambit was last tried by Adlai Stevenson in 1956, who invoked the "solemn obligation" of the voters to consider "who will be their president if the elected president is prevented by a higher will from serving his full term." That televised V.P. fight (which featured John Kennedy, Estes Kefauver, Hubert Humphrey and Al Gore Sr.) produced the last second ballot that the nation is ever likely to see at a national convention, as Kefauver won the dubious right to join Stevenson on the wrong side of the second Eisenhower-Nixon landslide.

Of course, the most fateful veep selection in the last century was made at another wide-open Democratic Convention -- 1944 in Chicago. Truman, aided by Franklin Roosevelt's string-pulling from Washington, edged out the popular sitting Vice President Henry Wallace. The entire history of the Cold War would have been far different if Wallace, who was easily gulled by Joe Stalin, had succeeded to the Oval Office when FDR died in the spring of 1945. Sometimes, it seems, American democracy works best when the people (or, at least, the convention delegates) choose the VIP who will be V.P.