How the legendary screenwriter of "Roman Holiday" and "Spartacus" defied Congress, broke the blacklist and raised his family. 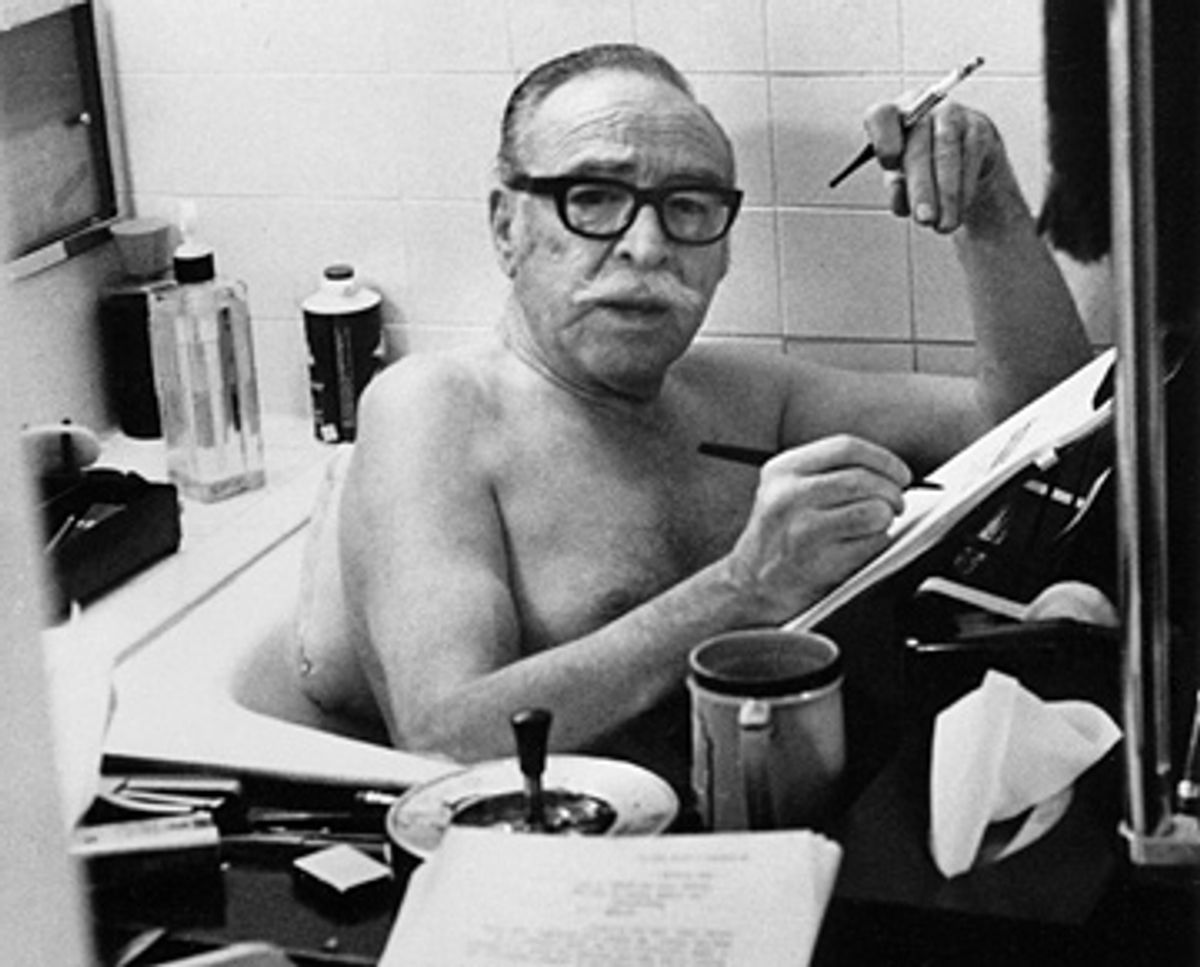 No one has ever summed up the Hollywood blacklist of the 1950s -- and, by extension, the entire history of that decade's anti-Communist witch hunt -- any better than this:

"The blacklist was a time of evil. No one on either side who survived it came through untouched by evil. There was bad faith and good, honesty and dishonesty, courage and cowardice, selflessness and opportunism, wisdom and stupidity, good and bad on both sides. It will do no good to search for villains or heroes or saints or devils because there were none; there were only victims. Some suffered less than others, some grew or were diminished, but in the final tally we were all victims because almost without exception each of us felt compelled to say things he did not want to say, to do things he did not want to do, to deliver and receive wounds he truly did not want to exchange. That is why none of us -- right, left, or center -- emerged from that long nightmare without sin."

Those words were spoken by Dalton Trumbo in 1971, when he received a lifetime achievement award from the Writers Guild of America -- as he noted at the time, an award bestowed by those who had fought for him, those who had betrayed him and those who had only the vaguest notion who he was. In "Trumbo," the new film directed by Peter Askin and adapted from Christopher Trumbo's off-Broadway play about his father, the speech is given an electrifying reading by actor David Strathairn. "Trumbo" is a terrific picture, a blend of interviews and archival footage and readings of Trumbo's letters and speeches (by Strathairn, Michael Douglas, Joan Allen, Paul Giamatti, Brian Dennehy and others) that vividly illustrates why the blacklist remains an urgent issue 60 years later. One could wish it were a bit more honest about the sources of Trumbo's obvious mixed feelings about himself and his fellow leftists. (Perhaps Christopher Trumbo's forthcoming book will address this.)

Dalton Trumbo was the most famous and probably the most talented of the Hollywood 10, the group of left-wing film industry professionals who went to prison after refusing to cooperate with the House Un-American Activities Committee in 1947. Along with many other actors, writers, directors and musicians, they were then banished from the business. Trumbo himself served 10 months in federal prison after his conviction for contempt of the 80th Congress; as he remarks in an archival interview seen in the film, he entirely agreed with the verdict, as he felt nothing but contempt for that Congress and several later ones.

He continued to write scripts under assumed names and in impoverished circumstances after his release from prison, and spent several years with his wife and three kids in Mexico working for little or nothing. He wrote at least 30 films and doctored or rewrote countless others. He won two Academy Awards decades after the fact, one of them posthumous. (They were for "Roman Holiday" in 1953 and "The Brave One" in 1956.) His other screenplays included "Kitty Foyle" (nominated for a 1940 Oscar), "Gun Crazy," "Lonely Are the Brave," "The Sandpiper" and the antiwar classic "Johnny Got His Gun," adapted from his own novel and his only directing effort. Trumbo also became the first of the Hollywood 10 to break the blacklist, when Otto Preminger hired him to write "Exodus" and Kirk Douglas hired him to write "Spartacus," both made in 1960.

If the Hollywood blacklist and the entire Red Scare has become a murky, antique-seeming affair in most people's minds, there are reasons for that. Inevitably, the passage of time and the death of nearly all the participants has turned it into a remote artifact of black-and-white newsreel footage. I think the fact that most of the Hollywood 10 and other blacklistees continued to work, under various ruses, and even formed an expatriate Red community of sorts in Mexico, makes the whole thing seem like a romantic caper. In fact, it was a cruel and deeply symbolic act of tyranny that displays all too clearly one of the running themes of American history: Convince people that their family's safety is at stake, and they'll believe all kinds of outrageous lies and turn against their neighbors who happen to look or act different. I know, that's starting to seem unpleasantly familiar, but let's not get ahead of the story.

Historians in recent years have legitimately attempted to wrestle with the era's complexities and shine light into its darker corners. It has long since become clear, for example, that many American Communists, Trumbo included, succumbed to the paranoia and authoritarianism that by Stalin's time were ingrained doctrines of their faith. Ironically enough, during World War II Trumbo apparently informed the FBI about his contacts with people he suspected were Nazi sympathizers. He later said this was a "foolish" decision, and that he quickly understood that the agents were more interested in him than in his letters from possible Hitler-lovers. None of this is mentioned in the film.

Along with honest historical inquiry, however, has come a smug, contrarian right-wing campaign to muddy the waters and make the paranoid derangement of '50s America seem somehow justified. If American Communists held a misguided faith in the Stalinist Soviet state, the thinking goes, and if some tiny percentage of them were Soviet agents or spies (and let's stipulate that those things are true) then all 80,000 or so were, prima facie, seditious revolutionaries and threats to democracy -- and the Hollywood 10 really were trying to pervert healthy Americans with Red propaganda concealed as entertainment. Not all versions of the neocon rehabilitation of McCarthyism are quite so baldly ludicrous, but all must make the imaginative leap that a tiny, ineffective and consistently persecuted political movement, which throughout its brief heyday attempted to reassure the public that "Communism is 20th century Americanism," was in fact an immensely powerful and sinister force.

All disputes about history are really arguments about the present, and that goes double in this case. Contemporary right-wingers don't care about the real story of Dalton Trumbo, his nine original co-defendants or the dozens of other blacklistees that followed. (A random assortment: John Garfield, Dashiell Hammett, Judy Holliday, Langston Hughes, Gypsy Rose Lee, Arthur Miller, Zero Mostel, Dorothy Parker, Edward G. Robinson, Artie Shaw, Orson Welles, Josh White.) In fact, as Askin's film makes clear, Trumbo was a witty, irascible, mule-stubborn individualist who grew up on Colorado rangeland and was a poor candidate for Marxist-Leninist groupthink. He was a Communist Party member for, at most, four or five years, and like most other American Reds of the period -- like, say, my mother -- he was more attracted to the excitement, the sense of action and heady adventure, than to the core ideology. (No, I'm not a neutral observer of this issue, if that's even possible.)

What the more intelligent neocons see in the 1950s crackdown on Communism is both an underlying pattern and an instructive example, having to do with power and how to wield it. The real target of the Red Scare was not the handful of prominent lefties like Trumbo who had their livelihoods destroyed and their reputations ruined but rather the rest of society, which proved by and large to be craven, suggestible, and downright eager to hew to a new standard of patriotic conformity. Whether this was accidental or intentional, pursuing a highly unpopular minority provided authoritarian elements in this country with a test case: How far could constitutional rights and liberties be eroded by government-sponsored fear-mongering? The answer was pretty far, and would-be dictators from J. Edgar Hoover to Dick Cheney have been renovating and repeating the pattern ever since, with a different half-imaginary enemy in the gunsight.

In one devastating letter read in the film, Trumbo observes that the liberal producer who doesn't believe in the blacklist but apologetically tells him he can't hire a known Communist because "that's the country these days" is more oppressive than any congressional blowhard. His eloquent anger toward the country that he believes betrayed freedom, principle and basic human decency in its moment of postwar crisis is matched by his confidence that if he could poll the entire American population on one question -- "Would you like a man who informs on his friend?" -- the universal answer would be no.

But the lesson of "Trumbo" that clearly resonates in 2008 is that even in an increasingly pluralistic society, public tolerance can readily be turned against those who hold troubling ideologies or alien beliefs, and in that situation terrible things become acceptable. Some of those things are small, like the cruelty and ostracism Trumbo's daughter endured in elementary school, and some are larger. One of the anti-Communist movement's darkest triumphs was the Emergency Detention Act of 1950, which envisioned the suspension of constitutional rights in a national emergency, and funded the creation of six concentration camps for American civilians who "probably will engage in, or probably will conspire with others to engage in, acts of espionage or sabotage." It was passed by Congress over Harry Truman's veto, but without much public debate.

Not much about this act is easily available online, a startling fact in this age of information overload. Congress repealed it in 1971, and the six camps -- some of them formerly used as Japanese-American internment camps during World War II -- fell into disrepair. But it obviously struck some people as a good idea, and so today our secret prisons are in other countries and governed by no law, and so far they have not housed any cantankerous Hollywood screenwriters. No one, as Trumbo said, who lived through the blacklist years emerged from them unscathed by evil, and now that evil has been visited on later generations. His wife and kids loved him, and he finally got his Oscars. Surely that counts for something.

Beyond The Multiplex Communism Documentaries Movies