All-night party in a lost city 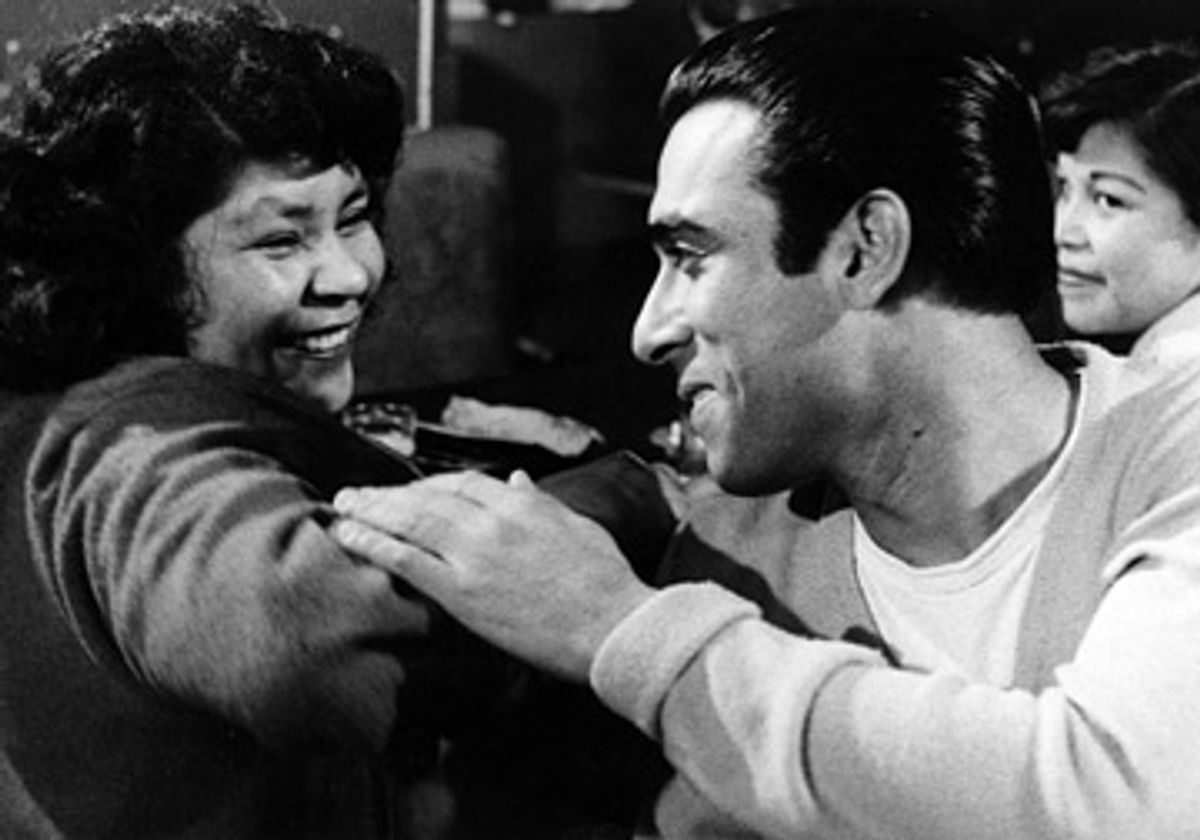 In the late 1950s, a USC filmmaking student named Kent Mackenzie began hanging out with the community of young American Indians in the neighborhood of Bunker Hill, just north of downtown Los Angeles. Most of these young people had recently moved from the Indian reservations of the southwestern United States, becoming part of a massive urban relocation of the Native American population that would be much discussed by later sociologists, but was hardly noticed at the time. "The Exiles," the black-and-white feature film Mackenzie made on the streets of L.A. between 1958 and 1960 with a group of Indians he knew, is an awkward, somewhat dated blend of fiction and documentary -- but it's also an astonishing, heartbreaking viewing experience and, in its new release from Milestone Films, a major work of restoration and rediscovery.

Mackenzie's script was based on the personal experiences of Yvonne Williams, Homer Nish and Tommy Reynolds, the film's subjects and/or actors, and recorded interviews with the cast are used as voiceover narration explaining each character's thoughts. There are episodes, but by design nothing close to a conventional plot: Beefy Homer and ne'er-do-well Tommy dump Yvonne -- who is pregnant with Homer's child and yearns for a settled domestic existence -- at a downtown movie theater, then head out for a long night of drinking, gambling and womanizing, followed by an amazing predawn party sequence on a trash-strewn hilltop, featuring both Thunderbird wine and tribal songs and dances. You get the feeling it's not a new pattern, and that it's likely to be repeated the next night and the one after that.

There's no editorializing or explicit social commentary in "The Exiles," with the possible exception of a scene in which Homer stands in front of a liquor store on Hill Street reading a letter from his parents back on the "rez" in Valentine, Ariz., and imagines a bucolic scene there. (Again, this is meant to convey Homer's point of view, not the director's.) You can certainly argue that these characters' lives of dead-broke hedonism, skating from one beer and one dollar to the next one, reflect a legacy of profound cultural defeat and economic oppression. But it's not at all clear that they see it that way, and Mackenzie doesn't necessarily either.

Like his contemporaries Cassavetes, Truffaut and Godard (whose work he may or may not have seen), Mackenzie is pursuing subjective human experience, not intellectual analysis, and his extraordinary shot-sequences -- like the giddy, drunken, hair-raising drive through a tunnel in a top-down convertible -- address issues of signification more than anything I could say about the film. It's worth adding that the terrific original garage-rock score is by an L.A. band called the Revels, whose song "Comanche" appears both here and in "Pulp Fiction," a movie unquestionably influenced by this one. If the stagey, docudrama quality of "The Exiles" takes time to get used to, as does the odd, artificial "post-sync" sound -- nearly all the dialogue was recorded in a studio, after the fact, as in many European films of the period -- the startling naturalism of the images still wins out.

Along with capturing a vanished era of Indian urban subculture that mainstream America knew nothing about and cared even less, Mackenzie's miraculous black-and-white images (as lovingly restored by Ross Lipman at the UCLA Film & Television Archive) literally capture a vanished physical landscape, from the predominantly Indian dive bars and grindhouse movie theaters of Main Street to the Angels Flight tramway and decaying Victorian rooming houses of Bunker Hill (memorably used as a location in Robert Aldrich's 1955 noir "Kiss Me Deadly" and other period films). Although the neighborhood technically still exists -- it's now the skyscraper district of downtown L.A., in fact -- every building seen in "The Exiles" is gone today, the hill itself has been flattened and the Angels Flight railway, reconstructed nearby as a tourist attraction, has been shut down since 2001.

Inspired both by early documentary filmmakers like Robert Flaherty and Humphrey Jennings and by the social realism of Jean Renoir and Vittorio de Sica, Mackenzie strove to capture his subjects' lives in all their complexity, without pitying or exoticizing them. "I tried very hard not to be attracted by the strangeness of the environment as opposed to my own, and to avoid the 'romance of poverty,'" he wrote. He intended "The Exiles" as an "anti-theatrical" and "anti-social-documentary" film, which would pose problems for the viewer it did not resolve. Given that it has never had a commercial, theatrical engagement in the past 47 years, I suppose he succeeded a little too well.

There's entirely too much synchronicity to the story of "The Exiles," in fact: It's a forgotten movie about a forgotten people, made in a forgotten neighborhood by a forgotten director. Despite premiering at the Venice and San Francisco film festivals (and playing the first-ever New York Film Festival in 1964), the picture never found theatrical distribution and for decades was available only in 16mm and patchy VHS classroom versions. Mackenzie died in 1980, after making only two more films (one of them a 1965 TV special called "The Teenage Revolution," narrated by Van Heflin). By any objective measure, he was a failure as a filmmaker. But in the secret, unwritten history of alternative American culture he stands as a hero, alongside the Indians of Bunker Hill and the generations before them.

"The Exiles" opens July 11 at the IFC Center in New York, with other cities and DVD release to follow.