How did a cheesy Scandinavian pop group in jumpsuits and blue eye shadow become as seriously beloved as the Beatles? 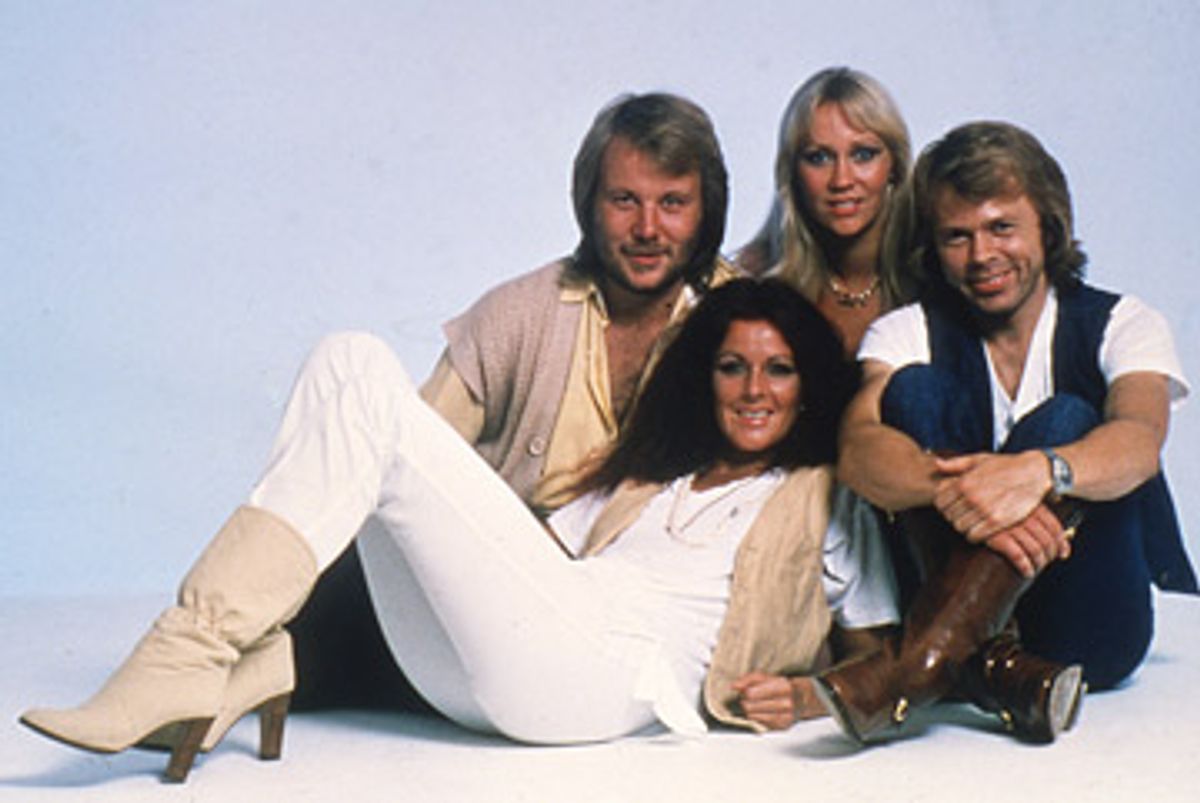 Forget the sparkly jumpsuits. Forget the girls with blue eye shadow, the boys with feathered hair, the less than impressive dance moves. Forget how uncool you ever felt belting out "The Name of the Game" in the privacy of your car. And while you're at it, let go of the shame surrounding your secret yearning to tuck in to "Mamma Mia!" this weekend. Because ABBA rock. Embrace it. Own it.

What is it about this rather cheesy Scandinavian pop group that sticks in our hearts like hot chewing gum on a summertime pavement? How is it that a group that essentially disbanded in 1982 is still selling upward of 2 million albums a year? It can't just be a collective nostalgia for wide collars, kitsch and up-tempo songs sung with an English-as-a-second-language accent. We can wrap our critical credibility around other acts more obtuse and obscure, we can brush off our relationship with ABBA -- Benny Andersson, Björn Ulvaeus, Anni-Frid Lyngstad and Agnetha Fältskog -- as purely novelty based. But how cynical would we have to be to believe that the brightness and liveliness and pure fun of something diminishes its artistic value? Is it possible to stop worrying and learn to love the Björn?

You wouldn't be alone. Elisabeth Vincentelli, author of the 33 1/3 series book "ABBA: ABBA Gold," says, via e-mail, "The band has tons of fans among the kind of artists that usually get the kind of 'serious' critical recognition ABBA itself sometimes doesn't get (Elvis Costello, Stephin Merritt of Magnetic Fields, etc.). The songs are incredibly melodic, and their sophistication hides behind apparent simplicity. The arrangements are often complex (Andersson and Ulvaeus used a lot of multitracking, both on the instruments and on the voices), and the interpretation by Fältskog and Lyngstad is a very canny mix of a pop sensibility and one that's closer to musical theater."

The story begins in 1966, when Björn Ulvaeus, a member of folk group the Hootenanny Singers, met Benny Andersson, keyboardist for the Hep Stars. Before long, Ulvaeus and Andersson were collaborating, writing songs and playing together. It has to be the first and last time in pop history that words like "hootenanny" and "hep" ever spawned anything so auspicious.

By the early '70s, Ulvaeus had paired off both musically and romantically with young pop singer Agnetha Fältskog, and Andersson had done likewise with vocalist Anni-Frid Lyngstad (Frida for short). And when Agnetha, Björn, Benny and Anni-Frid acronymed themselves into ABBA and started making music, they created a sound so big it reverberates on the dance floor to this day.

The first time I heard the Swedish supergroup, I was a little girl, out shopping with my mom. I had been raised on Top 40, on the Fifth Dimension and the Carpenters. But ABBA stunned me. I didn't know quite who Fernando was, or what the hell he was doing that "frightful night" he crossed the Rio Grande, but the melody was so intriguing, the girls' harmony so pretty, I felt like crying right there in the supermarket.

The group had already had its big breakthrough two years before "Fernando" hit my eardrums, cleaning up at the Eurovision song contest with "Waterloo," a criminally infectious paean of romantic surrender. Over the course of the '70s, ABBA continued their stream of hits, becoming one of the biggest-selling acts in the world, spawning sold-out tours and shattering chart records from Australia to Japan to the U.K. Back at home, I was morphing from a Jackson Five-loving 'tween to a surly prepubescent with a taste for punk. Even at the group's height, it wasn't considered cool to like ABBA. But deep down, I always knew that no amount of Sex Pistols would ever shake the grip "Money Money Money" had on my soul. Other bands of the same era, notably the Raspberries and Badfinger, tinkered with similar elegantly orchestrated, bouncy styles. But do the members of Badfinger have a museum in Stockholm devoted exclusively to their history, as ABBA members do? Has there ever been a Raspberries-based hit musical?

Part of the secret of the group's allure is ABBA's startlingly spiritual foundation. Says Matt Barton, curator of recorded sound at the Library of Congress, "Here and there, there's something that's so much like a hymn." In fact, notes Barton, ABBA organist Benny Andersson has gone on to record his interpretation of a Swedish hymn. Anyone who has ever gathered to sing up to the heavens has a little ABBA in his or her cultural DNA. No wonder the group has been known to provoke near Pentecostal fervor.

But it's not the gospel-choir-like charm of the music, or even the elaborate way it comes together, that makes ABBA enduring. No, it's the potent cocktail of the subliminally spiritual mixed with the flat-out libidinous. Listening to ABBA again lately, I've become increasingly aware of something I'd only vaguely perceived at all those "Does Your Mother Know?"-tinged wedding receptions and ironically themed gay bars -- this music is actually pretty damn sexy.

There's something undeniably, urgently compelling about a song like "Gimme! Gimme! Gimme!" a greedy love call for satisfaction (no wonder Madonna sampled its hook for "Hung Up"). It's there in the brazen sexual equanimity of "Voulez-Vous," with its shivery ah-has, and the kittenish oooohs of "Dancing Queen." The lyrics may not be quite Shakespeare or even Holland-Dozier-Holland, even if you grant extra slack for not having English as a first language. But oversaturated orchestration, the way the women's voices could soar through the changes in an "SOS" or "Knowing Me, Knowing You" -- they're forces too potent and insistent to be mere disco-era pastiche.

By the early '80s, both of the couples that formed ABBA had broken up, and the band went into a hiatus that has lasted to the present. The members did solo projects and minor collaborations, though nothing they did individually ever matched the impact they had as a foursome. Their image remained frozen in a polyester time warp. But the music never went away. It turned up in soundtracks, like those of "Priscilla, Queen of the Desert" and "Muriel's Wedding." It became the basis of a successful Broadway musical, "Mamma Mia!" which in turn spawned the movie now hitting theaters. Despite the clothes, the awkward choreography, the often nonsensical lyrics, ABBA endure because there's something spiritual and sexual and just plain sweet in their harmonies, something playfully innocent and disarmingly sophisticated. It's the soundtrack to Grandma's 80th birthday party, or a one-night stand. So if you want to sing along to "Take a Chance," don't feel embarrassed. That's what it was written for. Besides, you know all the words.