No expense has been spared in this lavish, streamlined adaptation, but is there such a thing as too much good taste? 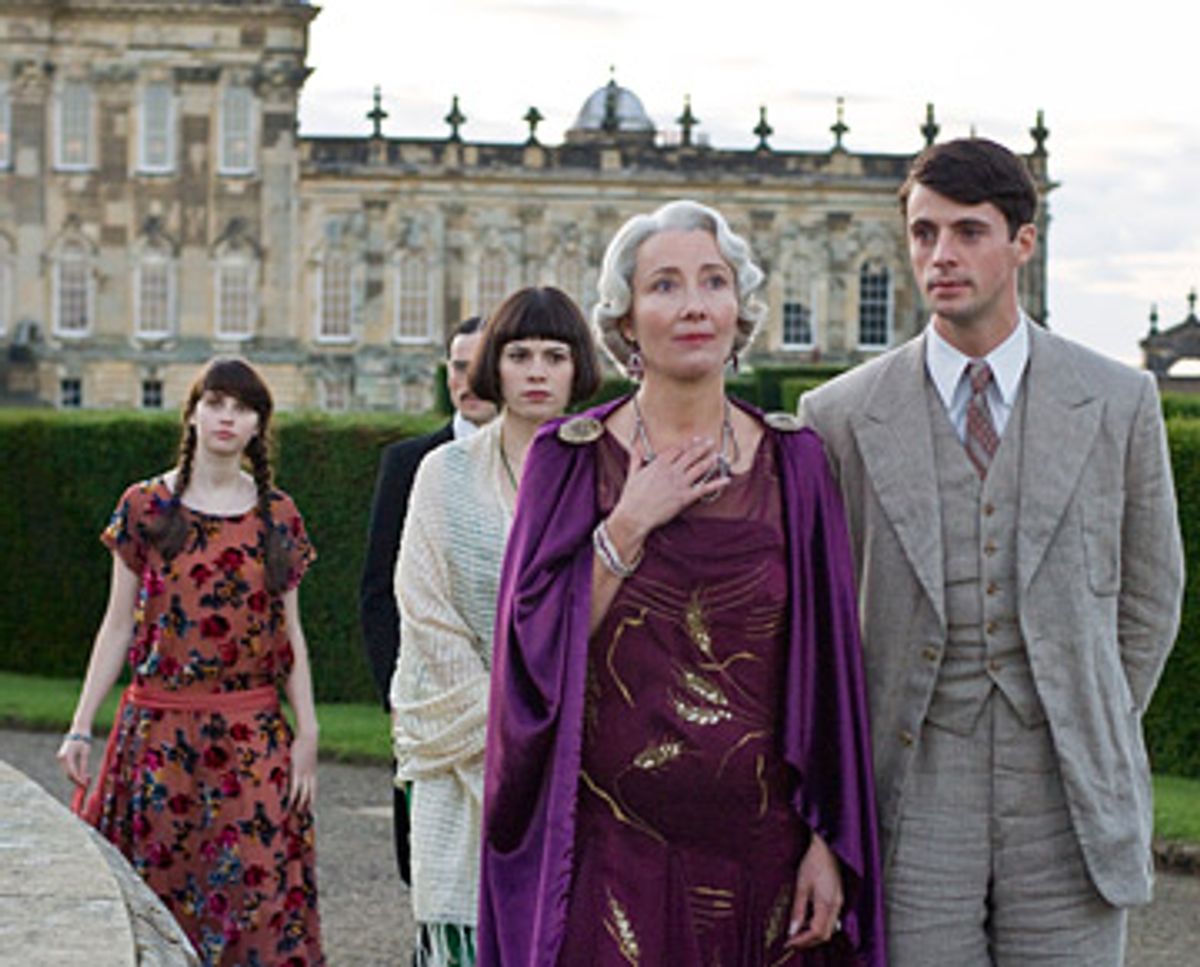 Human figures may be glimpsed amid the expensively furnished wastes of "Brideshead Revisited," but I admit I lost sight of them for whole stretches. There was so much ... stuff ... to look at. Those crimson swags in the drawing room windows -- have you ever seen damask drape like that? And OK, that twilit row of half-filled wine glasses on the stone ledge -- couldn't you sit and watch that for hours? And didn't the peacock look particularly smashing alongside the Bernini-esque fountain? Oh, and if I don't get those amber half-moon light fixtures for my birthday, please kill me. But not without burying me in that excellent cream morning suit, which is worn by ...

Right, right. Young Charles Ryder, an aspiring bourgeois artist, comes to Oxford and falls head over heels for one Sebastian Flyte. Sebastian, in addition to being cute and wealthy, is charmingly infantile -- he drags around a teddy bear named Aloysius -- but he's got a not-so-charming family waiting back at the ancestral manse. Older brother Bridey: insufferable prig. Older sister Julia: a hottie, but prevented by Catholic guilt from acting on her passions. Mom, aka Lady Marchmain: source of all that Catholic guilt. Dad, aka Lord Marchmain ... well, he's not there, actually, having long since fled to Venice, where he's now holding court with an Italian mistress.

The Marchmains are central to the scheme of Evelyn Waugh's 1945 novel for two very good reasons: They are rich, and they are Catholic. Waugh was always mistaking the elite for the elect, and in "Brideshead Revisited," this confusion is carried through to its natural end, muffling the author's barbed wit in a gauze of sentimental religiosity. The Marchmains, as presented, are plenty dysfunctional -- Mom's a prude and a control freak, Sebastian's a drunk, Julia's a narcissist -- but they're also meant to embody something fine and noble and true that is passing too quickly from the scene and leaving civilization in the hands of ... well, people who aren't Catholic and aren't beautiful and, worst of all, aren't from established families.

Everyday folks like us, in short, and I have to wonder what it is about the English mind that wants us to be nostalgic for people who would have abhorred us. The only way to make us care about the upper crust's agony, it seems, is to splash some of their money on us, and this director Julian Jarrold ("Becoming Jane") does in bucketfuls. Whether the action is unspooling across Oxford or Venice or Morocco or on an ocean liner or in a gallery, nothing good or bad happens without a week's worth of art direction. Doric arches, ivy-grown walls, baize doors, gilt cornices, plastered vaults: No expense has been spared, and no BBC lover has been alienated.

Indeed, the only real danger the film courts is comparison with the much-revered 1982 miniseries, starring Jeremy Irons and Anthony Andrews. To refresh my own memory, I caught a couple of episodes this past week, and I was surprised by how glacially slow the thing was -- and how punishingly faithful to Waugh, with every last swatch of violet prose ("this cloistral hush ... the soft vapours of a thousand years of learning ...") lifted bodily onto the screen. None of that hyperliteracy for Andrew Davies, who is (with Jeremy Brock) the 2008 version's adapter. Davies has already made a career of whipping warhorses into shape -- "Pride and Prejudice," "Vanity Fair," "Middlemarch" -- and he performs much the same feat here. The drawn-out and hitherto-unresolved feelings between Charles and Sebastian are efficiently consummated with a single kiss. The sexual vibe between Charles and Julia is resolved every bit as efficiently on a Venetian balcony and later in a stateroom.

Davies' streamlining is, at one level, a mercy -- the story's Oxford section really doesn't have to be as long as an Oxford term -- but it leaves the actors with little to do but join the pageant of poses. They're good actors, too (although Ben Whishaw, as Sebastian, couldn't clean Anthony Andrews' wingtips), which is part of the problem. You keep wishing they could break through all that suffocating good taste and strut their stuff. Watching Matthew Goode squeeze himself into Charles' dinner jacket, for example, I found myself recalling the authentically terrifying spectacle he cut as the bank-heist mastermind in "The Lookout." Seeing Hayley Atwell peering out from under Julia's black bangs, I couldn't help longing for her wacked-out M.P.'s daughter in the British miniseries "The Line of Beauty." As for Emma Thompson, I'm not sure what possessed her to play the gorgonian zealot Lady Marchmain (the film strips the character of all the charm she has in the book), but I had a whole career's worth of happy Thompson memories to distract me from the mismatch.

Nothing, though, could distract me from this: The only way to get with "Brideshead," finally, is to be an Evelyn Waugh-style believer; the rest of us need not apply. The current film climaxes, just as the original story does, with the deathbed genuflection of a fallen Roman Catholic, and it concludes with the suggestion that even the agnostic/atheistic Charles has caught a little of that R.C. fever. Actually, it's quite a bit more than a suggestion: a blaze of holy light. We are to believe, apparently, that the Catholicism that has thwarted virtually every character's chance for happiness is really every character's salvation. How did such a grim and doctrinaire theology emanate from one of the great comic novelists in the English language? Waugh, it's important to remember, was a latecomer to his faith, and no one is more dedicated to defending a faith's articles than a convert.

Doctrine trumps all, and the result, as George Orwell wrote in another context, is "the cult of the sanctified sinner," which "seems to me to be frivolous, and underneath it there probably lies a weakening of belief, for when people really believed in Hell, they were not so fond of striking graceful attitudes on its brink. More to the point, by trying to clothe theological speculations in flesh and blood, it produces psychological absurdities." Even clothed in linen and flannel and tweed, the absurdities of "Brideshead Revisited" can never be entirely hidden.