For the first time, it wouldn't be totally crazy for the Red Sox to ship out their nutty slugger. Just a little crazy. 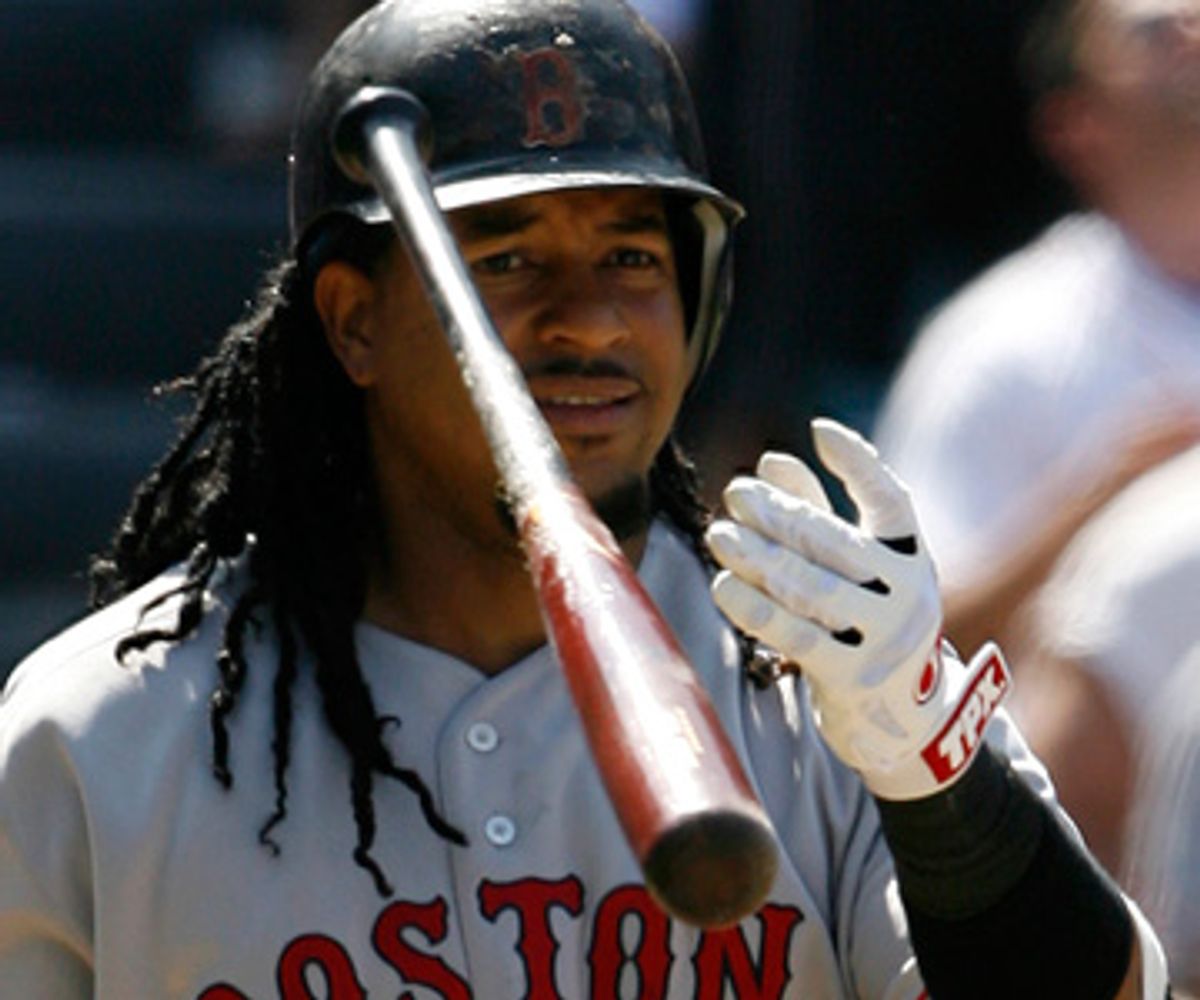 The coldest winter I ever spent was this summer. I got between Manny Ramirez and the Boston Red Sox front office. Brrr, kids!

Manny's melting his regular July meltdown, talking about how he's ready to be traded, not happy, feels unappreciated. This weekend he even said he'd play in Iraq. Just: "Enough is enough" and "I'm tired of them, they're tired of me."

He's developed his annual mysterious injury and/or sickness -- sore knee this time around -- and, just for style points, added in the move of shoving a 64-year-old traveling secretary to the ground.

The Red Sox are playing their part in this little play, which is to stand around saying that they don't have a comment, but if they did have a comment, what they'd say would be that they're not going to comment, but yeah, they're trying to trade Manny. This time around they've added in the move of calling Ramirez's bluff on his injury claim, sending him to get an MRI on his knees and then ordering him back into the lineup when it came back clean.

The thing is, this is the first time it might not be totally crazy for the Red Sox to actually trade Ramirez, though it would still be pretty crazy if they didn't get a good return for him. I mean, really good.

Ramirez is in the last year of an eight-year, $160 million contract, but the Sox hold two options at $20 million a year. Ramirez can veto any trade because he's a 10-year veteran who has spent the last five years with the same team, but he spent the weekend saying he'd OK a trade -- hey, even Iraq -- and also that he doesn't think the Red Sox will exercise his option for 2009.

His behavior isn't the reason it wouldn't be nuts this time around, though behavior's always part of any conversation about Manny. Early in his contract, the Red Sox were repeatedly thwarted in their attempts to trade him by the fact that no other team wanted to take on that huge deal. In recent years, the Sox have done the right thing by putting up with his antics while he's sat in the middle of their lineup and helped slug them to two championships.

If Tom Cruise wants a fresh 50-gallon barrel of sour cream and some latex gloves delivered to his trailer every day when he's shooting your movie, you order up the sour cream because the guy's money in the bank. Same with Manny and his bathroom breaks and phantom injuries and annual I'm not happy I'm happy I'm not happy I'm injured oh I'm so so happy with the Red Sox and healthy too routine around the trade deadline.

But at some point, the antics become not worth it. Ramirez's performance doesn't have to fall as far as Joe Quietlydoeshisjob's performance does before the scales start to tip against him. If it's Wilford Brimley asking for the sour cream, you find another guy for the character role.

In a Saturday column advocating for the Red Sox to literally just throw Ramirez off the team -- because .900 OPS guys are so annoying when they act up -- Boston Herald columnist Steve Buckley wrote, "It doesn't get any worse than this, Sox fans. The New York Yankees pulled into town last night to begin a three-game series against the Red Sox, whereupon Manny pulled up lame. He was in the lineup, and then he was not in the lineup. Ramirez already pulled himself out of the lineup the other day in Seattle, now he did it again yesterday."

Manny Ramirez, that $20 million a year albatross, is hitting .302 with a .400 on-base percentage, a .531 slugging percentage and 19 home runs in 97 games. That's after he went 3-for-5 with two doubles, two runs scored and two RBIs in a 9-2 win over the Yankees Sunday night. The Red Sox, those victims of something it doesn't get any worse than, are a game behind Tampa Bay in the A.L. East, two ahead of the Yankees in the wild-card race.

But while Ramirez is still an elite slugger, he's not quite as elite as he has been for most of his career, and he's 36 years old. Not exactly Wilford Brimley or anything, but that trend isn't likely to reverse. He's also not likely to sign a new contract with the Sox, who don't figure to be likely to pick up the first of those $20 million options this winter on a guy who's a pain in the ass and might be headed downhill. Emphasis on the might be headed downhill.

For all the salary inflation that's gone on in baseball, $20 million is still a whole lot, even for the Red Sox.

So the question is how much two and maybe three months of Manny Ramirez is worth to the Red Sox. It's a pedestrian matter, weighing the value of what other teams offer for Ramirez against the value he'd provide by being in the lineup down the stretch and in the playoffs.

It's the same equation for Ramirez as it would be for any other player, and it's the same one it has been for years. What has changed is the amount of time involved. It would have been nuts to trade five or six years of Ramirez for some prospects and salary relief. Two months is another story.

Now as then, all the melodrama about Manny's antics, Manny being Manny, Manny being a distraction, it's a lot of good copy and bad information. His antics have distracted the Red Sox to two of the last four World Series championships. He could very well be in the process of enough is enoughing them to a third in five.

For that reason, another team would have to come up with a damn impressive package to pry Ramirez loose, even though he's all but gone after the season, and even though it doesn't get any worse than his antics.

That's because of something else Ramirez mentioned Sunday, though he was talking about his belief that the Red Sox wouldn't pick up his option, not the possibility of the club trading him.