How Kafka-esque is Kafka?

The Czech writer has become the prophet of our absurd era, but a new book intends to strip the author of his saintly reputation. 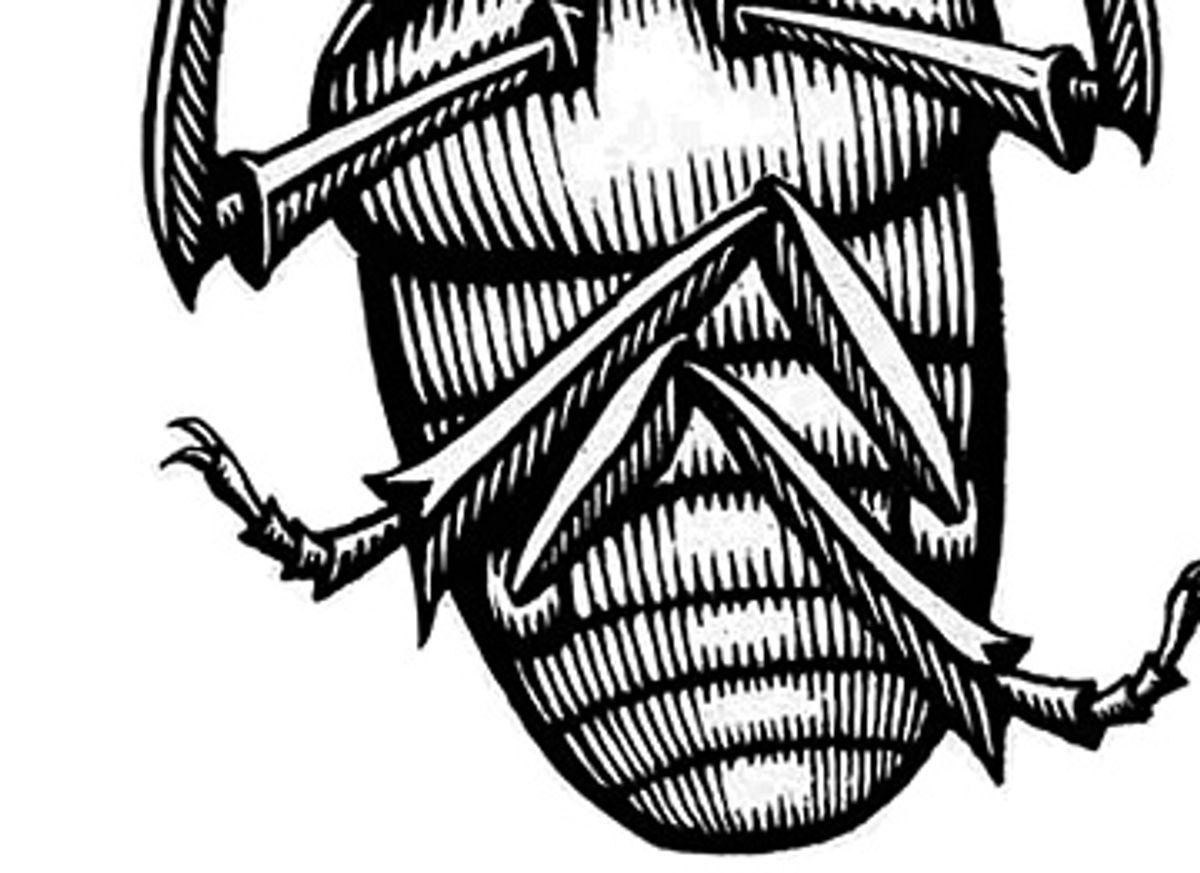 "One does not have to believe everything is true," a priest tells Joseph K in "The Trial." "One only has to believe it is necessary."

I've looked, and I can't find a better summation of the Bush administration's logic. And if there's any doubt that Franz Kafka has supplanted George Orwell as the prophet of our times, remember that the Iraq war was, from the start, driven not by soldiers but by bureaucrats -- specialists detached from general consequences, a class that Kafka understood better than anybody. Like the torturers of Abu Ghraib, like the commanding officers of Guantánamo Bay, the characters in Kafka's stories are simply, preeminently, doing their jobs, and this is the source of their horror.

And their absurdity. In his learned and lively dissection of Kafka-mania, "Why You Should Read Kafka Before You Waste Your Life," James Hawes obligingly lists some of the Czech author's more bizarre scenarios: "A man wakes up and finds that he's a beetle. A man who has done nothing wrong fights for his life against a bizarre court that sits in almost every attic in the world. A machine quite literally writes condemned people to death. A man tries forever to get into a mysterious castle. A man waits in vain all his life by the Door to the Law, only to be told as he dies that this door was only ever meant for him."

In short, Kafka's protagonists are (like the detainees of Guantánamo) running headlong into abstraction. They are modernists against their best wishes, but their problem is timeless. "They think they live in a world that is run on grounds of morality and rationality," writes Hawes, "a world where there is some connection between what we deserve and what we get." Unfortunately, "the basic chasm between the world we want and the world we're in is as vast in the age of electric lights, cars and phones as it is in the Book of Job."

It's best not to take Hawes' title too seriously. He doesn't really care if we waste our lives. His primary mission is to lay waste to what he calls "the K-myth": "the idea of a mysterious genius, a lonely Middle European Nostradamus, who, almost ignored by his contemporaries, somehow plumbed the depths of his mysterious, quasi-saintly psyche to predict the Holocaust and the Gulags."

How could he have predicted those terrors, argues Hawes, when he was so devoutly a man of his time? Which is to say an enthusiastic supporter of the Habsburg Empire who invested heavily in the Austro-Hungarian war effort (and lost his shirt). Not to mention a largely unobservant Jew who identified deeply with Germans and who longed more than anything to leave Prague for Berlin.

As for being unknown to his peers ... as early as February 1911, he could write confidently in his diary that "in intellectual/spiritual matters there is no doubt that I am now the focal point of Prague." At every turn, Kafka was backed by a potent literary clique that included Rainer Maria Rilke, Hermann Hesse and Robert Musil. In 1915, he won the highly prestigious Fontane Prize (or, rather, the prize's nominal winner donated the prize money, by prearrangement, to Kafka). As Hawes makes clear, Kafka was "a paid-up and active member, right until the end, of the German-speaking élite."

In his zeal to upset "known truths" about the author, Hawes even goes out of his way to be nice to Hermann Kafka, who, in his son's famously bitter (and undelivered) letter, was charged with being a kind of domestic terrorist, poisoning the house with "vigor, noise and hot temper." On the contrary, says Hawes, father Kafka was considered quite amiable and was most indulgent by the standards of his day, giving his son free rein to pursue his own interests, letting him live rent-free, even allowing him to choose his own fiancée, "a modern, big-city Berlin girl" named Felice Bauer who lacked both beauty and dowry.

It was Franz who, according to historical record, made Felice's life a misery, leading her through a long dance of lunge and retreat that left them both exhausted. Love and passion never do quite fuse in the Kafka psyche. In a letter to one of his mistresses, he admits his longing "for a quite specific vileness, for something mildly repugnant, painful, dirty." Hawes is unimpressed by this exhibitionism. "Saying that you are impure and dirty does not make you profound ... Yes, Kafka was uneasy about his sexual tastes, but if feeling more at ease with bad girls than with nice girls (and feeling bad about it afterward) is a sign of potential sainthood, there are an awful lot of men in line waiting for halos."

It was around this point in the book that I began to wonder about the straw Franz that Hawes keeps hauling up only to knock down again. For starters, does anyone really think of Kafka as a saint? Certainly no one who has read his work, with its furtive, ugly "romantic" encounters and its often-contemptuous view of women. My guess is that Hawes caricatures "establishment thinking" the better to rise above it. He gives the back of his hand to the vast majority of Kafka scholars. Even "highly educated German scholars," he writes, are "incapable of reading what Kafka actually wrote" (italics, as always, are his). Only Hawes, it seems, has the keys to this particular kingdom.

His great self-anointed coup is to locate the alleged inspiration for Kafka's "Metamorphosis" in a passing line from Goethe's "The Sorrows of Young Werther": "One would like to turn into a june bug [Maienkäfer] so that one could swim around in this sea of pleasant scents, getting all one's nourishment [Nahrung] like this." Frantically Hawes waves this plum at us, and what a meager fruit it proves to be. For one thing, Gregor Samsa awakes to find he's a gigantic Ungeziefer, which literally means "vermin" and which has been translated as everything from insect to cockroach. More to the point, the metaphorical use to which Kafka puts his bug is as distant from Goethe's airy Romantic conceit as Gregor's urban lifestyle is from Werther's rural landscape.

Hawes does have a flair for phrase-making (he writes of Kafka's "guilt-edged sexual desire") and his interpretations can be penetrating. I was particularly taken with the link he draws between "Bleak House" and "The Trial," which carries Dickens' legal critique to its logical (or illogical) extreme -- into "the realms of purely psychological reality." I was grateful, too, that Hawes emphasized how funny Kafka can be. (Myself, I've always been tickled by the old charwoman who keeps barging into Gregor Samsa's room and saying things like "Come along, then, you old dung beetle!")

What I couldn't quite figure out is why Hawes wrote the book in the first place. He goes to a great deal of trouble to deconstruct the "received Kafka" before concluding that it really doesn't matter who Kafka was. The best approach to the man's work, he says, is "one that doesn't need any biographical knowledge or abstract theory." Except -- and here's where it gets baffling -- we are supposed to know about the age in which Kafka wrote. "To start reading 'The Trial' without knowing certain basic things -- not things about Kafka the man, but about his world -- is like going to 'Hamlet' without knowing, as every groundling in Shakespeare's England knew without even thinking about it, that when a king dies, a legitimate prince whose uncle illegally grabs the crown must be in daily fear of assassination."

Actually, even today's groundlings could have figured out that one. "Hamlet," in fact, requires next to no knowledge of its historical period. And neither, I would argue, does "The Trial," which triumphs through the very concreteness of its abstraction. Indeed, if Kafka's work were strictly a product of its time, it couldn't speak so powerfully to us today; we wouldn't be hearing his voice in Beijing, in Myanmar, in Chechnya. Somehow, in the way of genius, Kafka was able to dig down to our taproot, to divine things about us we didn't fully understand.

Why, virtually alone among his peers, was he able to do this? Answering that question -- which is to say, learning about the man himself -- would seem as fruitful an avenue for analysis as any. And in at least one case, biographical knowledge actually enhances our appreciation of the art. Several months after asking Felice Bauer to marry him, Kafka became obsessed (characteristically) with Felice's friend, Grete Bloch, and began sending her love letters. "I feel an unmistakable and true longing for you," he wrote. Far from reciprocating his feelings, Grete shared them with Felice, and on July 12, 1914, the two women, along with Felice's sister, confronted Kafka at the Hotel Askanische Hof in Berlin. His perfidy was exposed, the engagement was called off, and Kafka retreated to the Baltic coast, with the memory of the women's judgment still hanging over him.

Shortly after that grueling encounter, Kafka began work on his masterpiece, "The Trial," a book that is premised on Joseph K's innocence but is alive to the possibility that he is also -- like Kafka -- guilty. "Guilt," says the executioner of "In the Penal Colony," "is never to be doubted." And when Joseph K cries, "We are all human beings here after all, each the same as the other," he might as well be saying that each of us has wronged somebody in some fashion and that our punishment is never too far off.