It all started with the Germs

A loving, low-budget film tries to revive the undead spirit of Darby Crash and L.A.'s most anarchic punk pioneers. But some things aren't easy to resurrect. 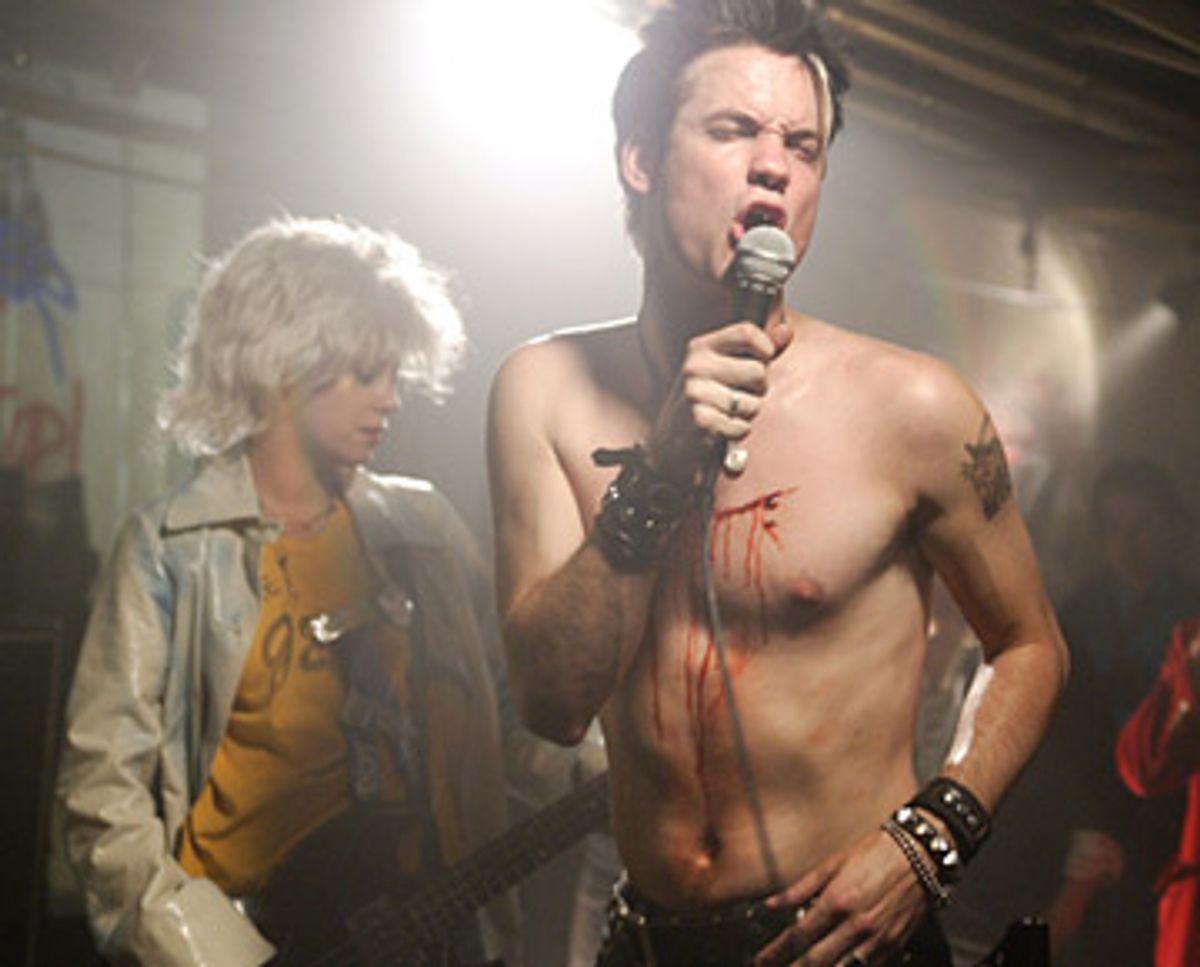 Bijou Phillips as Lorna Doom (left) and Shane West as Darby Crash in "What We Do Is Secret."

When you stop and think about it, it's strange that nobody made an off-Hollywood movie about Darby Crash and the Germs sometime in the early to mid-'90s, with a young Johnny Depp (or, even better, River Phoenix) in the starring role and Stephen Frears or Jonathan Demme behind the camera. Consider the story, which seems rife with symbolism and significance: A bright, disturbed teenager in 1970s Los Angeles, with a taste for Queen, Nietzsche and hard drugs, sets out to become a rock star and almost accidentally invents an American variant on punk rock more nihilistic and deranged than the British original. (I know, punk actually began in New York; let's move on.)

At every moment of their brief existence, the Germs seemed to embody a dialectic of creation and destruction. Arguably, they spawned a distinctively American musical culture, and antisocial youth movement, that wound up percolating, in various watered-down forms, through every suburb and every shopping mall in the country. Yet the legendary chaos and violence of their live shows meant that they barely played even in their hometown. In order to film the Germs live for her documentary "The Decline of Western Civilization," Penelope Spheeris had to hire a hall herself. The band recorded only one official album and made essentially no money. By 1980 the Germs had already broken up acrimoniously, only to reunite for a one-off nostalgia gig. On Dec. 7 of that year, lead singer Darby Crash killed himself with a heroin overdose. He was 22. The next day John Lennon was shot, and outside the tiny and marginal world of punk, no one even noticed the dead junkie kid in L.A.

For better or worse, we don't have that artful, haunting Frears/Demme film, with its remarkable mise-en-scène of '70s decrepitude and wrenching scenes of Depp babbling and vomiting onstage, or injecting speedballs into his armpit arteries. Instead we've got first-time director Rodger Grossman's labor of love, "What We Do Is Secret" (title of a Germs song and posthumous E.P.), which is something else again. It's an achingly earnest low-budget movie made by and for Germs fans; co-writer Michelle Baer Ghaffari was Crash's roommate and close friend, and surviving band members Pat Smear (later a guitarist with Nirvana and then with the Foo Fighters), Lorna Doom and Don Bolles all cooperated. Those who believe, with some justification, that the Germs' strangeness and power have never fully been appreciated will be delighted.

Actor Shane West (the former star of "ER" and "Once and Again") is such a dead ringer for Crash that he's actually been performing with Smear, Doom and Bolles in a post-2005 reunion version of the Germs. I haven't seen them play or anything, and maybe they're great. But the sheer weirdness of that idea -- three 50ish ex-punks getting onstage with a TV actor to reanimate the spirit of one of the most anarchic and terrifying live bands in rock history -- conveys something central about "What We Do Is Secret."

This isn't a boring movie or a dishonest one. But it's a relentlessly literal-minded one, light on vision and atmosphere, that moves through the history of the Germs with a checklist: Crash (originally Jan Paul Beahm) and his buddy George Ruthenberg, aka Pat Smear (Rick Gonzalez), as glam-rock outcast teens at L.A.'s University High? Check. Early band members include Belinda Carlisle (later the Go-Gos' singer) and D.J. Bonebrake (of X)? Check. English punks the Damned, on their first American tour, attend the first Germs show? Check. Profanity-laced on-air interview with Rodney Bingenheimer of KROQ? Check. Crash professes an interest in Hitler and fascism, and writes ad copy mocking the Holocaust that even Slash, L.A.'s rock mag, won't publish? Check. Every Germs show collapses almost immediately into mayhem? Check. Crash shoots lots of drugs and is almost certainly gay, in the middle of the sexist and homophobic punk scene? Check.

Other cast members include actress-model-singer Bijou Phillips as Lorna Doom, who might be called the archetypal dyed-blond punk bass player, and Noah Segan as much-maligned drummer Don Bolles (who borrowed his name from an Arizona journalist murdered by the Mob). Most of the acting is bright and lively, and even if Grossman's mockumentary format is pretty played out by this time, it creates some decent gags. (A fictional Penelope Spheeris appears briefly and awkwardly, and a fictional Joan Jett is shown sacked out on the couch while "producing" the Germs' vaunted debut album.)

But the clean, orderly and linear narrative of "What We Do Is Secret" ultimately does not serve its subject matter. This is like an after-school special about the Germs, absent the naked moralizing, and Darby Crash deserves something more complicated than that. With all his devotion to getting the story right -- and that's a worthy goal, don't get me wrong -- Grossman never captures the insanity and terror, or for that matter the seductive allure, of nihilist L.A. punk in its early years. The drugs, the flirtation with fascism, the slovenliness and violence and anarchic noise and incomprehensible stream-of-unconsciousness lyrics were not just facts. In their own way, they were part of a coherent artistic and philosophical history, that being the history of the idea that life is without meaning and the world can go fuck itself.

Spheeris' film, after all, was called "The Decline of Western Civilization," and as a description of that moment it really wasn't a joke. The Darby Crash of that film is a magnetic, massively fucked-up young man, a dark prince of post-suburban depravity so sick from drug abuse he's past caring about food or hygiene or stardom or human life. (He evidently didn't care much for his own.) Of course that wasn't the only truth about Crash; his talents as a songwriter and performer were genuine, if inextricably welded to mental illness and intoxication, and his legacy deserves attention. But West's physical and vocal impersonation of Crash, however convincing it is, never approaches insanity -- or the raw, naked Iggy Pop power it can lend to a performer who doesn't give a shit whether the house burns down, the Russians nuke us and his next high is his last.

In this movie, Crash seems more like a handsome young prime-time character who's gotten some weird ideas out of "Beyond Good and Evil" and is wrestling with his sexuality. Nobody actually says that if he'd gotten more love, he might not have shot heroin into his veins until he died, but that's kind of what I take away from it. Like the reunited band fronted by West, "What We Do Is Secret" may be trying to revive something that can't be revived -- a vanished world in which a tiny, angry subculture, universally hated and rejected by mainstream society, reciprocated in spades.

"What We Do Is Secret" opens Aug. 8 at the Sunshine Cinema in New York; Aug. 15 at the Music Box in Chicago; Aug. 15 in Boston and Los Angeles; Aug. 29 in Columbus, Ohio, Philadelphia, San Francisco and Washington; Sept. 5 in San Diego; Sept. 12 in Denver and St. Louis; and Sept. 26 in Atlanta and Minneapolis, with more cities to follow.