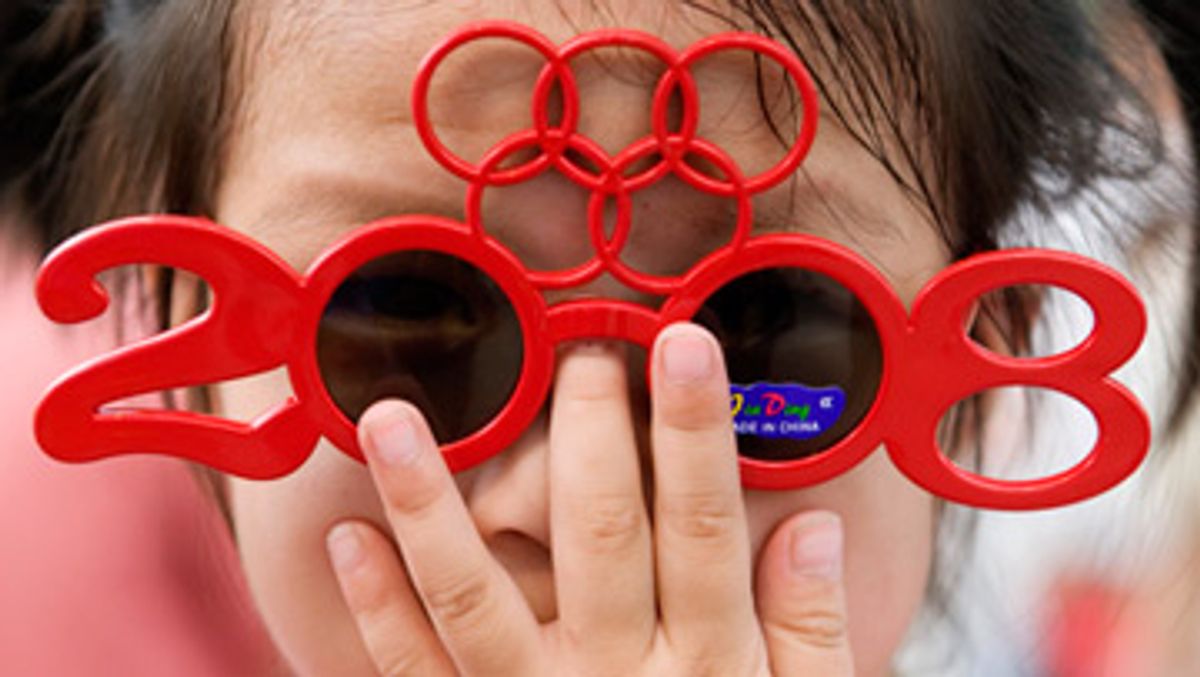 A girl adjusts her sunglasses while waiting for the Beijing 2008 Olympic torch to pass by Tiananmen Square Wednesday.

Welcome to Salon's 2008 Olympics blog. For the next two weeks, we'll be obsessing over the games from both near and far. NBC, which has broadcast rights in the U.S., says it'll have 1,400 hours of televised coverage and another 2,200 hours online. That works out to 211 hours, 45 minutes and 53 seconds of video per day.

Our plan is to watch as much of it as humanly possible. I pledge to handle the 53 seconds myself.

There will be four of us posting regularly, mostly during the work week but we'll go early, late and over the weekend as events warrant. We also might let one of Salon's other talented writers in now and again, provided they pass the initiation.

I've been writing Salon's daily sports column since 2002. The bios of the three writers who haven't been repeating the same four jokes every day for the last six years are on the left there, but just in case that's not enough:

Gary Kamiya is a founding editor at Salon who's now a writer at large, switching from his weekly column to revisit the Olympics. He covered the games for Salon in Nagano in 1998, Sydney in 2000 and Athens in 2004, once memorably writing, about a drunken fan of Japanese ski jumper Masahiko Harada who bit him on the chest in excitement over Kamiya having seen Harada's gold-medal-winning jump that day: "Whoa, dude! Lighten up on the Jim Beam and general insanity!"

John Krich will be writing from Beijing. An author of many books and a writer for the Asian Wall Street Journal, Krich says he's been writing about his love-hate relationship with Beijing and China since before the Tiananmen Square protests. He's also a lifelong Olympics nut, having attended in Los Angeles in 1984 and Seoul in 1988 and written extensively about former Olympic heroes such as Taiwan's great decathlete, C.K. Yang.

Jennifer Sey is a former elite gymnast and the author of "Chalked Up," a memoir of her early life in gymnastics whose subtitle says a lot: "Inside Elite Gymnastics' Merciless Coaching, Overzealous Parents, Eating Disorders, and Elusive Olympic Dreams." The 1986 U.S. champion, Sey never went to the Olympics. She's now a marketing executive with Levi's Jeans in San Francisco, and this will be her first crack at this type of writing.

One request for all of you: The list of "Useful links" in the right column is just a starting point. We'll be adding more as we go, and if you have suggestions -- or anything else to say -- we'd love to hear from you in the comments.