The "bitter sea" of Chinese life

Our correspondent returns to Beijing for the games -- and finds the same old dreary place. 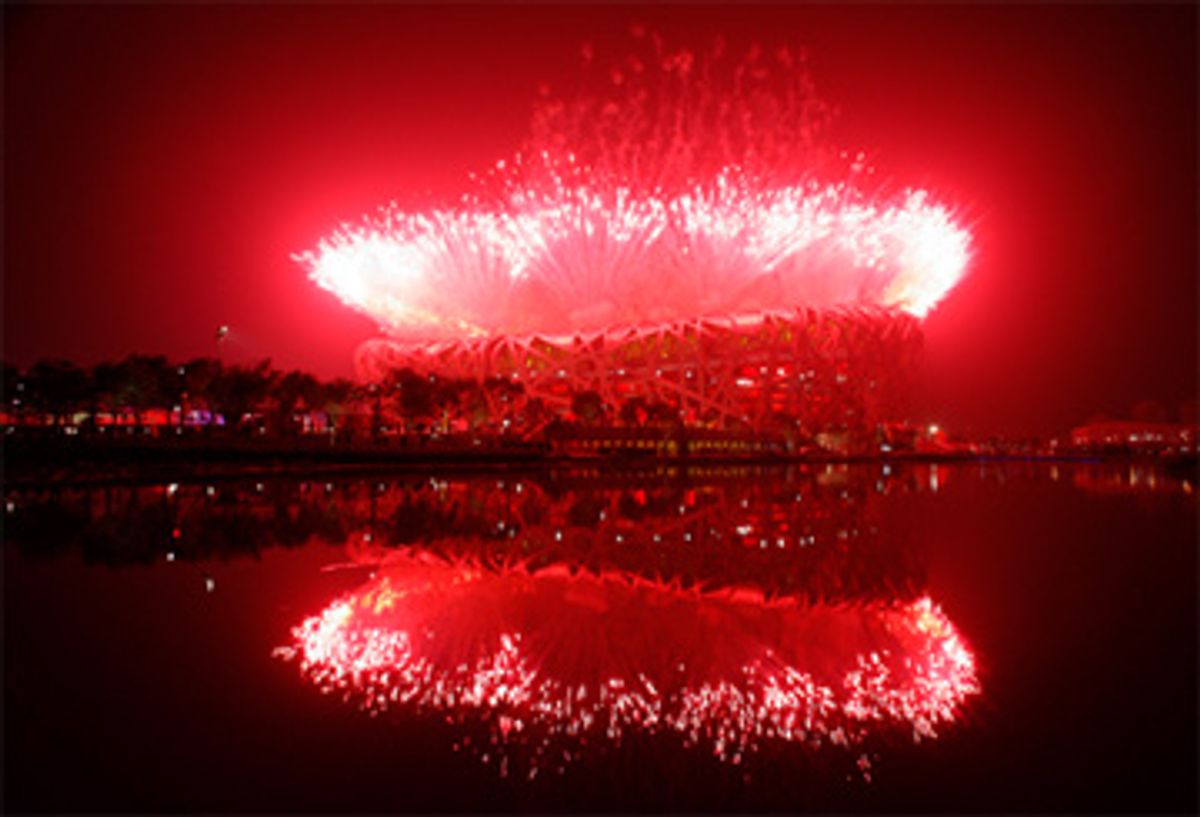 Fireworks explode over the National Stadium during Opening Ceremonies Friday.

A funny thing happened on the way to the Olympics. One middling typhoon decided to gather in the South China Sea, turning my hour stopover into 12 hours of considering the banners trumpeting the "Olympic Spirit" bestowed to gambling-obsessed Hong Kong solely because China itself was deemed too disease-ridden to stage equestrian events.

I should have known. Every flight into this harsh realm heads straight into banks of clouds out of some ancient landscape scroll. Turbulence is this country's middle name. What else to expect when steering a billion-plus hustlers and hungry mouths, rebels and drones toward some collective landing strip?

Since 1988 -- by coincidence, the starting date of China's efforts to host the Olympic Games -- I, too, had been charting the "bitter sea" of Chinese life. I'd been cursed and spit at, sprayed with Gobi Desert sandstorms, spied on and followed for the crime of holding hands, or worse, being foreign, sickened by grease-laden stir-fries and coal-laden air, cheated by cabbies and betrayed by a stream of women, stuck in faulty elevators for hours, and in one post-Tiananmen crackdown, lined up against a dark wall by rifle-wielding People's Liberation Army troops.

Still, I kept coming back for more, using every possible occasion to help me figure out why dour, gray Beijing should have become the place I most love to hate. I just had to be here on that lucky Friday the 13th in 2003 when Beijing was awarded the games, grasping at history in that split second between Juan Antonio Samaranch's slow announcement and the roar of the masses.

At that enormous pep rally, I had seen how much the student slogans of old had been replaced by flag-waving, how much the international recognition meant release from what Chinese viewed as "a hundred years of humiliation." (Only they could draw a straight line between the Opium Wars and athletes caught doping.) Heading like everyone else for Tiananmen Square, I'd had to hitch a ride for miles on the rack of a wobbly bicycle in yet another painful rite of initiation. For the millennium, too, I was lured to a subzero Great Wall and forced to buy an army coat and fur hat so I could hear mock Ming trumpets blaring and witness a dawning of the new age too pollutant cloaked to show the sun.

Now I am dreading the ways China will cloak itself with new and advanced stages of modern mythmaking -- fashioned by the world's best public relations consultants. The plastic Ronald McDonald smiles in place of the more traditional disgruntled pout.

For centuries, "inscrutability" and "world's oldest civilization" were effective enough to keep the world guessing at what was really going on. In more recent times, Mao's Little Red Book was held up as the barrier against foreign scrutiny. In college days when I fancied myself an American-style "Red Guard," I had romanticized China as the place where politics could transform all and a single slogan could send earnest millions in the same direction. I would soon see just how awful some of those directions were. Still, standing for the first time on the hallowed, zero ground of Tiananmen Square 20 years ago, I felt certain this would prove to be the center of the world. The boom to come proved me right, but exactly in the wrong way.

Etched in memory forever was my first sight of the single-lane hump of a road, a meridian leading straight to the heart of the Forbidden City, lined for miles with disciplined willows and plied solely by peasant bicyclists hauling huge loads of black charcoal coils. Now I arrive at the world's single largest airport, glittering in svelte columns and marble. There's nothing like that new-terminal smell. But while I imagined marching bands, teams of bouncy volunteers and singing karaoke girls, my delayed 5 a.m. landing has dampened the mood.

For my first Olympic moment, I spot Israeli tennis players, pint-size Guatemalan officials, plus plenty of distinguished older gents in official blazers, impatiently awaiting their limos. The closer one gets to any Olympics, the more one realizes the vast numbers of bureaucrats living the good life off the exploits of the young. I overhear an American arrival say, "I'm really looking forward to the wrestling, though I don't know much about Roman-Greco." Nor about Greco-Roman.

I'm cheered, however, to notice "Chinese characteristics" everywhere: ugly fittings for fire extinguishers, poor English signage (warning athletes in shooting events who are "carring guns"), the customs lines still designated for "foreigners," the only country that sees nothing wrong with so blunt a category. Foreign-exchange commissions are exorbitant and a "convenience store" where I try to replace my confiscated toothpaste offers shelves full of stuffed pandas and freeze-dried chestnuts.

But the real test comes at the taxi line. After years of publicized mobilization to get surly, rude and barely Mandarin-fluent cabbies, and other Beijingers, to learn English and standard politeness, not one of the several drivers awaiting me -- nor any in the subsequent day -- speak a word, nor can the six or seven soldiers manning the line. The closest anyone comes to deciphering the address where I'm headed, a fashionable development Americanized to "Upper East Side," is "Viper East Side."

And despite the cherry banners on every lamppost, Beijing's environs look as bleak, barren and bluntly red-brick utilitarian as ever. And the infamous air quality, after all the attempts at removing autos and factories, is the same as ever. Musty gray on gray. Visibility, as far as Mao's ghost can leap.

Local TV makes a fuss about U.S. cyclists arriving in masks. But all these Johnny-come-latelys in the smog Olympics are the kind of wimps who wouldn't dare eat snake or deer penis. Maybe they can do a follow-up study in a decade to study the effects of their days in the Beijing non-sun, like exposure to Agent Orange. But it's positively breathable to me compared with the gritty and yellowish atmosphere of old, where everyone got the "Beijing hack" and coal for heating homes gave the socialist motherland a Victorian feel out of some Dickens novel. Today, Beijing's persistent cloud cover is less literal, the byproduct of overdosing on progress, than it is the figurative fog to be plowed through, like all the layers of officialdom and obfuscation, to get at the truth. To get real in China, you've got to embrace the mist -- not fear it.

In the days ahead, I'll be asking the same questions as the rest of the world's instant experts and paid voyeurs. Will the games China plays prove an earth-changing event or just a new high point in international rivalry reduced to medal counts? Can China pass the grade as cheery host, as civil society? Clear the bar of superpower status? Does the Olympic ideal become further sullied or somehow leave some accidental residue of brotherhood?

Will the hoopla help open the door a bit on China's prisons, coal mines and sweatshops, or inch forward cross-cultural understanding? For me, the big news isn't going to be about how much China has changed -- as old hat as a Mao cap -- but what remains the same. And what comfort we can all take from the stubborn, unyielding character of this place, phenomenon and culture. For better or worse, China is still China. Buckle up. Get set for a bumpy ride.