And the next great American beer will be...?

Pabst may be worshiped by hipsters, but can it replace Budweiser as the best classic domestic brew? The answer may surprise you. 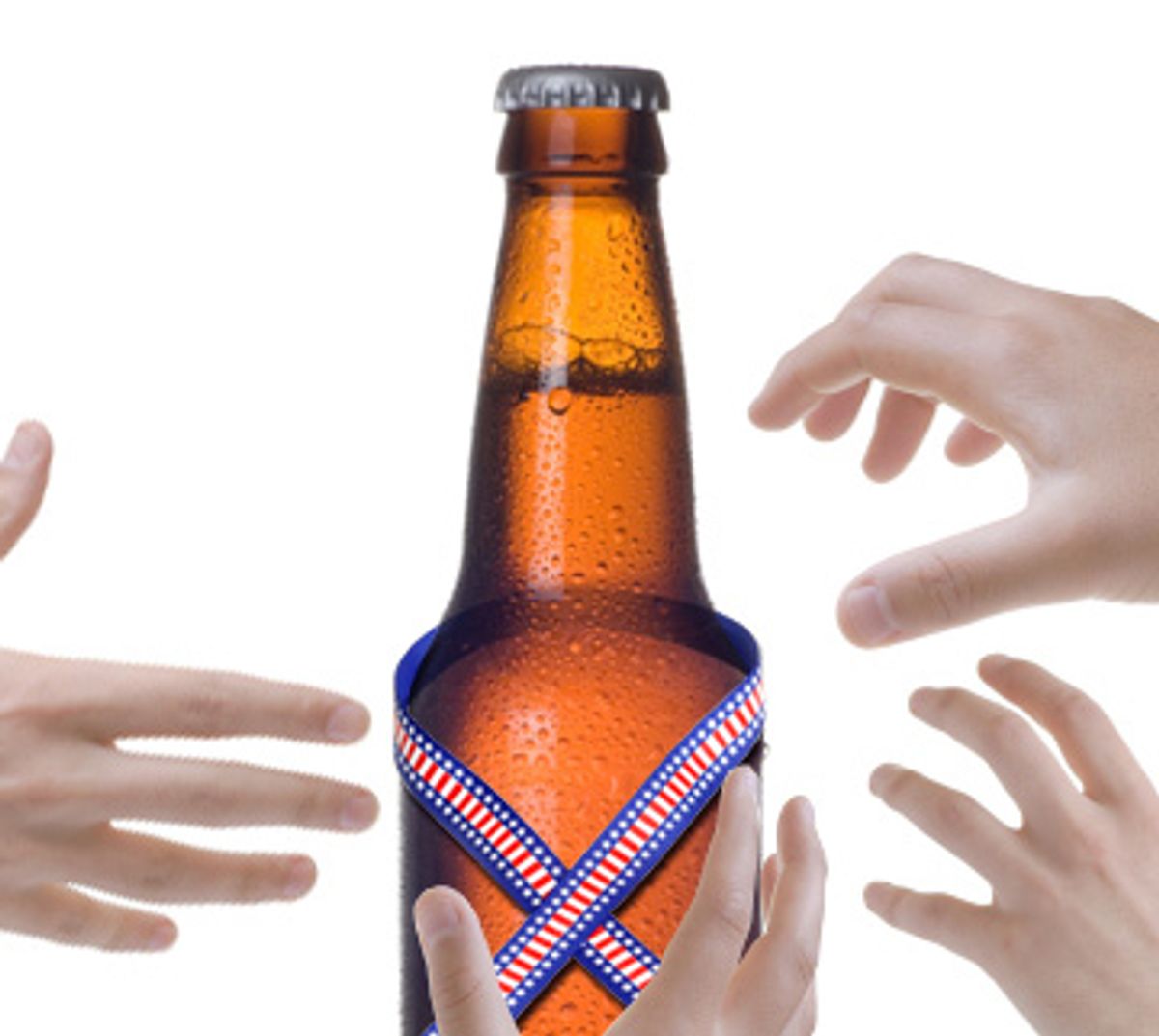 It was one of the hipper events this unhip correspondent has ever attended. The Windy City Story Slam was held in an unmarked storefront on the northwest side of Chicago. The neighborhood was in the interzone between a bohemian enclave and a barrio. Paintings hung from the bare brick walls. The opening act was a locally famous Mexican bartender in overalls, who played obscene folk songs on his guitar. During the Slam, five contestants spun five-minute vignettes -- one was about a childhood fight, another a druggy ex-boyfriend. The winner, a man wearing the biggest glasses I'd seen since Charles Nelson Reilly ruled "Match Game," took home $50. Every mote and motif in the room was a post-millennial hipster cliché, including the beer of choice. In the back of the room was a bar selling Pabst Blue Ribbon.

Since the beginning of this decade, Pabst Blue Ribbon's audience has changed from old guys with refrigerators in their garages to arty young urbanites. An unexceptional and declining brand, a former top-three beer turned redneck also-ran, Pabst reinvented itself as the coolest of brews in a movement that began in a Portland, Ore., dive bar and spread to indie-rock shows across the country. But now Pabst is trying to move on from its success with hipsters to conquer a far larger and very different demographic: all-American beer drinkers alienated by Anheuser-Busch's sale to a Belgian corporation. In its campaign to snatch Budweiser's title of Great American Lager, Pabst is already employing the kind of slick, misleading marketing that's bound to turn off hipsters who've embraced it as the anti-Bud. It may be exactly the right move.

"Pabst Brewing Company will be the last of the famous iconic U.S. brewers to be fully independent and American-owned," the company gloats on its Web site. "Most of our brands ... have been around since the 1800's."

In an online survey, Pabst asked customers this question: "Would information about Pabst's American ownership on packaging, like bottles or cans, impact your decision to purchase our products?"

If it does, they're either chumps, or they're already drunk. First, Pabst isn't even a brewer. It closed its Milwaukee brewery in 1996, and now does business out of an office in suburban Chicago. Second, its beers aren't made in American-owned breweries. Pabst farms out production of its brands to Miller -- which belongs to a South African corporation.

But Pabst's "We're an American Brand" claim may succeed. Since the Bud sale, the only classic American-made beers left are tiny regional brands. They're the real Great American Lagers, but in most of the country, patriotic macro-brew drinkers can't find them. And, as a new book points out, Pabst's emergence as a "trendy" beer (to quote a Chicago bartender) demonstrates both the power of its red-white-and-blue image, and its success at marketing, even when that was achieved by barely marketing at all.

Pabst's revival as a "retro-chic" beer began in the early 2000s, at Lutz Tavern, in Portland, reports Rob Walker in "Buying In: The Secret Dialogue Between What We Buy and Who We Are." For years, Portland's bike messengers and skaters had slugged down Blitz, a low-cost local brew. After Blitz went out of business, Lutz filled its niche with $1 cans of Pabst. The beer was embraced not only for its cheapness, but also because hipsters could drink it without feeling they'd been coerced by a corporate message.

"Long-neglected PBR had no image," Walker writes. "It was just there. Scarce and cheap, it had few negative connotations beyond that it was a kind of blank canvas, where brand meaning could be filled in by consumers."

That's not exactly true. PBR was spending its few ad dollars to sponsor fishing tournaments and stock car races. The Johnny Russell song "Red Necks, White Socks and Blue Ribbon Beer," and the "What'll You Have?" TV ads were vaguely embedded in Generation X's cultural consciousness, and one-buck Pabst was enough to revive them. Between 2001 and 2006, sales increased 67 percent.

Walker portrays the revivalists as trendy urbanites glomming on to blue-collar symbols. And they are, but not quite in the same way as a graphic designer who wears a Carhartt jacket because it's "unpretentious." Hipsters fetishize the lowbrow culture of the '70s and '80s. But hipsters also tend to hold down jobs as bar backs and waiters. Sure, there are trust funders among them, but they're mostly young people with thin wallets. The luckiest ones are still the lumpen of media and information technology. They can affect a trucker cap, but they might not have the cash for a truck. The hipster's beer of choice is always going to be a cheap one.

During his research, Walker met a skate punk who liked Pabst because he'd never seen an ad. "They're not insulting you," the skater said, perhaps unaware that not running ads was part of Pabst's marketing strategy for holding on to its anti-consumerist consumers. Pabst never set out to become a hipster beer -- a ploy like that would have backfired -- but once the company discovered its new audience, it began sponsoring bike polo tournaments, art galleries and indie publishers. The strategy wasn't just economical; it was essential. Pabst reached its niche drinkers without a massive ad campaign that would have caused them to discard it as a sellout. It worked on the skater, who lifted his shirt to show Walker his Pabst back tattoo.

"Pabst is part of my subculture," he declared.

But if Pabst drinkers are trying to drink their way to solidarity with the working class, they've chosen the wrong beer, Walker suggests.

"PBR's blue-collar, honest-working-man image, vaguely anticapitalist image -- the image attached to it by consumers -- is a sham," he writes. "You really couldn't do worse in picking a symbol of resistance to phony branding."

As "Buying In" points out, "Pabst shuttered its Milwaukee brewery, eliminating nearly 250 jobs and touching off a legal battle over pension obligations to former workers."

So can a patriotic American -- or an Americana-loving hipster -- still get a cheap buzz off a classic, domestic lager? Yes, but only if he lives in the right place. Now that Bud has been sold, the remaining domestic macro-brews could fit inside a six-pack sampler. And with one exception, they're local beers.

Genesee Cream Ale is still brewed in Rochester, N.Y. In nearby Utica, Matt Brewing will sell you a keg of Utica Club. Nothing remains of the Grain Belt Brewery save this kitschy sign, but the beer is produced in Minnesota, by Schell, which bought the brand in 2002. Iron City Beer was briefly owned by an Australian company, then snatched back by Pittsburghers who went bankrupt and sold out to a Connecticut equity fund manager. OK, he's an American. New England favorite Narragansett ("Hi, neighbor, have a 'Gansett!") was recently revived by a nostalgic Rhode Islander, who bought the rights from Pabst -- and hired a brewmaster from the old plant in Cranston.

Then there's Shiner Bock. For most of its century-long existence, it was only sold within 75 miles of central Texas' tiny town of Shiner. Then the beloved brewery was purchased by a San Antonio millionaire, who's made it available in 45 states. But it's a bock, not a traditional lager. Shiner Bock arrived in Chicago late last year. So I drank some. It went down like flat cola, and left a smoky, tangy scum on my tongue, which I could still taste the next morning.

So the title of Next Great American Lager has to go to … Yuengling. Yuengling has been making beer in Pottsville, Pa., since 1829. It's the oldest brewery in the United States. After all these years, it's still owned by a guy named Yuengling, and he intends to keep it.

"We just never chose to divest ourselves of it," said Dick Yuengling Jr. Yuengling has been courted by beer-making giants, but selling out would mean closing the brewery, and "there's not a lot of employment here. We're loyal to the area."

Yuengling is also cheap. You can get a case of premium for $14.35 at Riverside Beverages in Pottsville. (But hurry. That's a sale price.)

I have only one reservation about handing this crown to Yuengling. I've never had a Yuengling. The beer is available in only 10 states: Pennsylvania, New Jersey, New York, Delaware, Maryland, Washington, D.C., Virginia, North Carolina, Florida, South Carolina and Alabama. To verify Yuengling's quality, I called a friend who used to tend bar in the mountains of central Pennsylvania.

"It's a little richer and deeper than Bud or Coors," he said. "It's got a little more body. It's halfway between a craft beer and a production beer. It's still a lager, so it's got that crisp, uni-dimensional taste. I'd drink a Yuengling before I'd drink a Bud or a Miller or a Busch."

Dick Yuengling sees an opportunity in the Bud sale. He's been getting e-mails from outraged American beer drinkers, promising to switch. "We probably will start touting the fact that we're 100 percent family-owned and an American lager," he said. But that doesn't mean he'll bring Yuengling to your local bar. He saw how beers like Ballantine and Carling bankrupted themselves by trying to go nationwide. Same with Coors, whose foray east of the Mississippi had the collateral damage of making the plot of "Smokey and the Bandit" incomprehensible to modern viewers.

So if your image as an American depends on drinking a cheap domestic lager, you don't have too many options. You can move to New York, Pennsylvania, Minnesota or Rhode Island. Or you can drink a Pabst. It's as American as possible, under the circumstances.

Of course, Pabst's bid to become the President of Beers could end up alienating its hipster clique. But if Pabst's marketers are as savvy about that crowd as they've been so far, they're probably saying, "So what?" No product stays hip forever, and at 7 years old, the Pabst boomlet is reaching a generational breaking point.

Plus, if you were Pabst, which audience would you rather have: fickle, broke young people, or mainstream beer drinkers likely to stick with the brand the rest of their lives? The hipster revival bumped Pabst sales to 1.6 million barrels a year. Bud and Bud Light combined sell over 65 million. If Pabst can steal even 5 percent of that market, it will triple its profits. And the hipsters will have to find another cheap, semi-obscure beer. When they do, odds are it will be owned by Pabst.

During the 1990s, while wandering in the pre-hipster wilderness, Pabst bought up dozens of other fermented oldies acts like itself, those iconic American brands the Web site brags about. Like Pabst, they were going flat in VFW taps across the nation -- Stag and Old Style, Olympia and Schlitz, and on and on. Every single one of these Ford Tauruses of beerdom has the same lack of charisma, the same downscale kitsch appeal that made Pabst ripe for rediscovery by hipsters. Any one of them is unexceptional enough -- and cheap enough -- to be the next Pabst. I haven't had a Blatz in the longest time, have you?