"No fear, no regret"

In the men's team gymnastics final, no one lost. 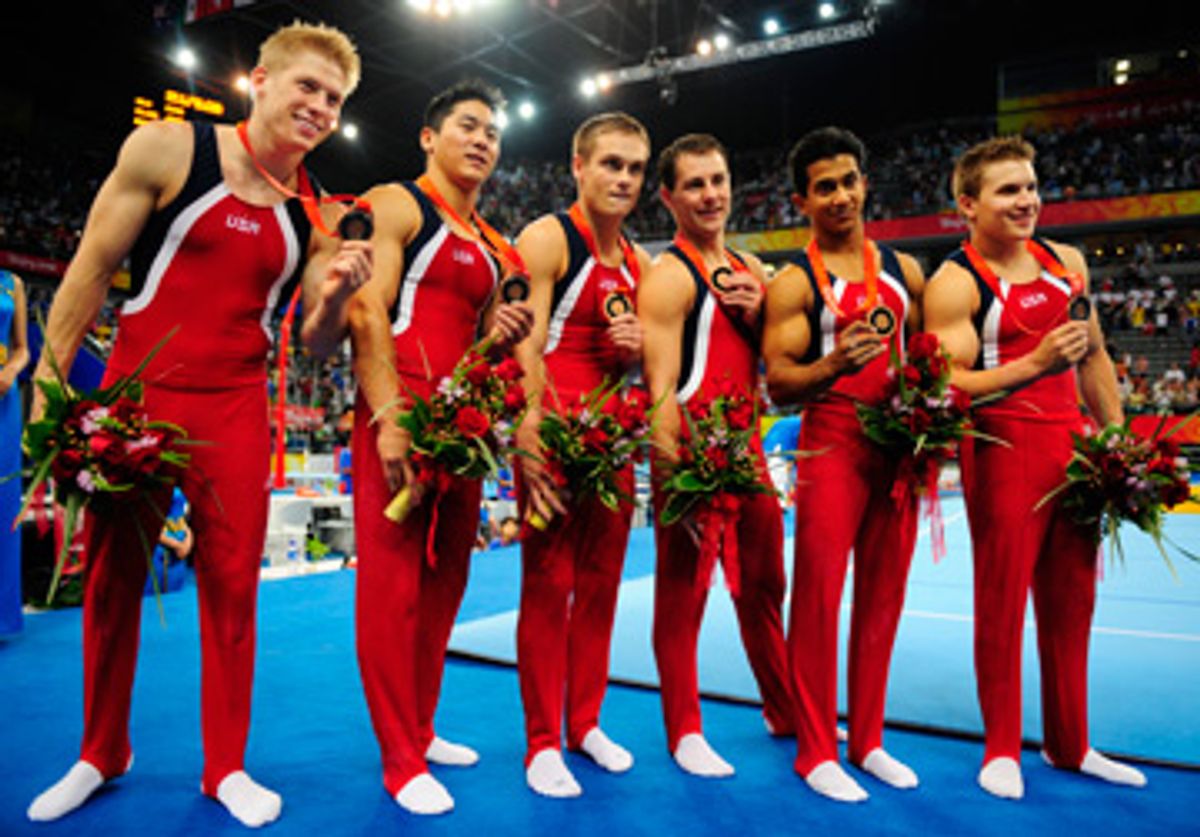 Members of the U.S. team pose on the podium after winning the men's team artistic gymnastics bronze medal at the Beijing 2008 Olympic Games August 12, 2008.

In our victory-obsessed, self-absorbed society, losing always has to mean something. It isn't enough just to say you had an off day, or were simply beaten by a superior opponent. No, defeat must have some larger significance. It must reveal some fault, some flaw, some weakness of character or preparation or will. In our narcissistic grandiosity -- a grandiosity secretly driven by self-doubt -- we see ourselves as the heroes in a quasi-mythical narrative. It is preordained that we must triumph. And so if we do not triumph, we must be to blame. The fault lies not in the stars but in ourselves.

We take this tendency to extremes with sports. We endlessly analyze, and psychoanalyze, athletes who lose. Sometimes this is legitimate. But much of the time, it's cheap speculation, often verging on voyeurism. It's uninformed and mean-spirited. Pay a dime and pass judgment on someone else. You can hear them braying at every baseball game and every sports talk-radio show, the all-knowing inquisitors, loudly condemning the character and ethics of perfect strangers.

This judgmentalism derives largely from our belief that losing is unacceptable -- a belief that has deep roots. Vince Lombardi's famous dictum "winning isn't everything, it's the only thing" pretty much sums it up. There is an opposing view, one reflected in the maxim "it isn't whether you win or lose, it's how you play the game." But that countervailing perspective is getting weaker and weaker. In a noisy and frenetic age when victory drowns out self-insight and process has been replaced by information, it's easiest to just move "losers" to the trash and hit delete.

This is a travesty of everything that sports is about. For those who lose sometimes achieve things even greater than those who win. Those achievements are often invisible. But if we could read the secret history of defeat, we would find amazing and heart-quickening things in it.

One of the great things about the Olympics is that it acknowledges this. First, simply to be an Olympian, no matter whether you're Michael Phelps or the last-place table-tennis player from the Maldive Islands, is to be a winner forever. At the very end of the great Sydney Games, I will never forget the vast crowd in the Olympic Stadium rising to its feet and saluting the very last runner in the marathon, Elias Rodriguez of the Federated States of Micronesia, as he wearily made his way around the track. The roars that poured down were our salute not just to Rodriguez, but to all the athletes who competed, whether they won or lost. They were our salute to something that doesn't appear in any box score, but is what the Olympics are all about: the human spirit.

U.S. gymnast Raj Bhavsar expressed thiswith singular eloquence. After sittting on the sidelines as an alternate on the team in Athens, Bhavsar hit the lowest point in his life. But he found his way out of the pit by coming to understand what the Olympics are really about -- or can be. "I found being an Olympian was not about the title, it was more about the heart; it’s about the spirit that you had put into the journey and it's about the struggle," Bhavsar said. "The word 'Olympian' -- it's not like 'doctor' or 'mister' or something like that. There's always a story to be told with a much deeper meaning to it."

The other way that the Olympics expands our narrow view of what it means to win and lose is by awarding three medals, not just one. To see the glowing faces of an athlete as she receives a silver or bronze medal, eternal confirmation that she was the second or third best in the world at some incredibly difficult thing, is to be reminded of how arbitrary it is to deem that there is only one winner. Yes, gold is the goal, and all athletes want to win. Competitiveness is innate to sport. You couldn't force yourself to go through what you have to go through as a world-class athlete without being intensely competitive. But what the three medals remind us is that you can lose and still win.

Sometimes, by serendipity, there's a specific event that highlights this. Last night's men's team gymnastics final was one of them. Only one team won gold, but all three medal-winners came through like champions. There were truly no losers in this event.

The three teams that won medals, China, Japan and the U.S., each faced a unique challenge. The Chinese team, of course, was bearing the weight of an entire country on its shoulders. The Chinese men are the best gymnasts in the world by far, but they had faltered disastrously in Athens. Now, at an Olympics held in their native land, they had to win. If they didn't, they would not only disgrace themselves, but their country. Other than that, no pressure.

The Japanese, the defending gold medalists, were considered an equal lock to win silver after Paul Hamm, by far the best American gymnast, broke his hand and had to withdraw. After Hamm's brother Morgan was also a late scratch because of injury, it was a no-brainer: The Japanese had to win silver. But they got off to a slow start last night, and disaster struck on the fourth event, the vault: two of their three vaulters made major mistakes, leading to the worst score on the apparatus of any of the eight teams. With just one apparatus remaining, the Japanese stood in third place, behind China and the U.S.

As for the U.S., their team was in shambles. Two members were alternates, who only found out they were going to be on the team shortly before the games. One of them, Sasha Artemev, was informed only the day before the Opening Ceremony. The U.S. team placed sixth of eight teams in the qualifying round, trailing China, Japan, Russia, Germany and South Korea and ahead of only France and Romania.

Each team, then, faced a different challenge. China had to live up to its nation's high expectations and overcome a history of choking in the big events. Japan had to fight back from serious mistakes and the resulting shell shock: Midway through the competition, NBC's commentator said the Japanese team appeared listless and demoralized. And the patched-together U.S. men had to figure out a way, any way, to get onto the podium.

And they all came through.

China did it gloriously, seizing the lead after four apparatuses and never looking back, its gymnasts performing at their accustomed, mind-blowing level on rings, vault and the horizontal bar. When the final event was done, the expression on their leader Yan Wei's face said it all: Mission accomplished. The monkey was off their back, never to return.

The Japanese men had a bumpier road, but they gutted it out. In their final routine they needed three clean routines on the bar to overtake the U.S. The bar is a beautiful, risky apparatus in which the tiniest error can instantly transform a soaring performance into a crumpled failure. But the Japanese men didn't make a mistake. Their earlier malaise was forgotten. They flew through the air with the greatest of ease, and for their daring they won silver.

The Americans had performed superbly throughout the evening. Led by all-arounder Jonathan Horton, who looks like that brash crew-cut kid who always appointed himself quarterback in the pickup games of your youth, is built like a spark plug and has the heart of a lion, the U.S. was in position to medal. But things went badly wrong on the last apparatus, the pommel horse. The first American, Kevin Tan, fell and received only a 12.775 -- the gymnastics equivalent of an F-minus. Then the steady alternate Raj Bhavsar, who had come back from deep depression after being left off the team in Athens, made a couple of mistakes and only posted a 13.750. It all came down to the last U.S. gymnast of the night, Sasha Artemev.

Artemev, son of a Russian champion, is one of the best in the world on the horse, but he'd fallen three out of four times in the U.S. team trials, which is why he was left off the team in the first place. In a memorable performance, he'd come through huge in the qualifying to help earn the U.S. men a spot in the finals. But this was the first and only event of his entire night. He'd been sitting and watching for hours. Could he do it?

Artemev got up -- and stopped. The bizarrely slow Olympics scoring process forced him to wait, and wait, and wait some more -- three minutes' worth. It was like an NFL coach trying to "ice" a kicker by calling three timeouts in a row. But when Artemev mounted the horse, he was the one who turned out to have ice water in his veins. His legs scissored back and forth in gorgeous precision, and his hands gripped the horse as if he was carrying his child in his hands over a 10,000-foot drop. When he dismounted he was mobbed by his teammates, who knew he had just sealed the deal. His 15.350 was enough to keep the Germans in fourth and put the Americans on the stand.

Afterward, Artemev said, "This was the one time I needed to hit. I told myself I was not going to fall."

During a team huddle as the competition neared its climax, the camera caught Horton telling his teammates, "No fear, no regrets." That's a lot easier thing to say than to do. But last night, all three teams lived up to that slogan. They performed without fear, and now, forever, they need have no regrets.