The life of John Edwards flame Rielle Hunter has been a novel, literally, with Bolivian marching powder, movie scripts called "It's All About Uranus" and electrocuted horses. 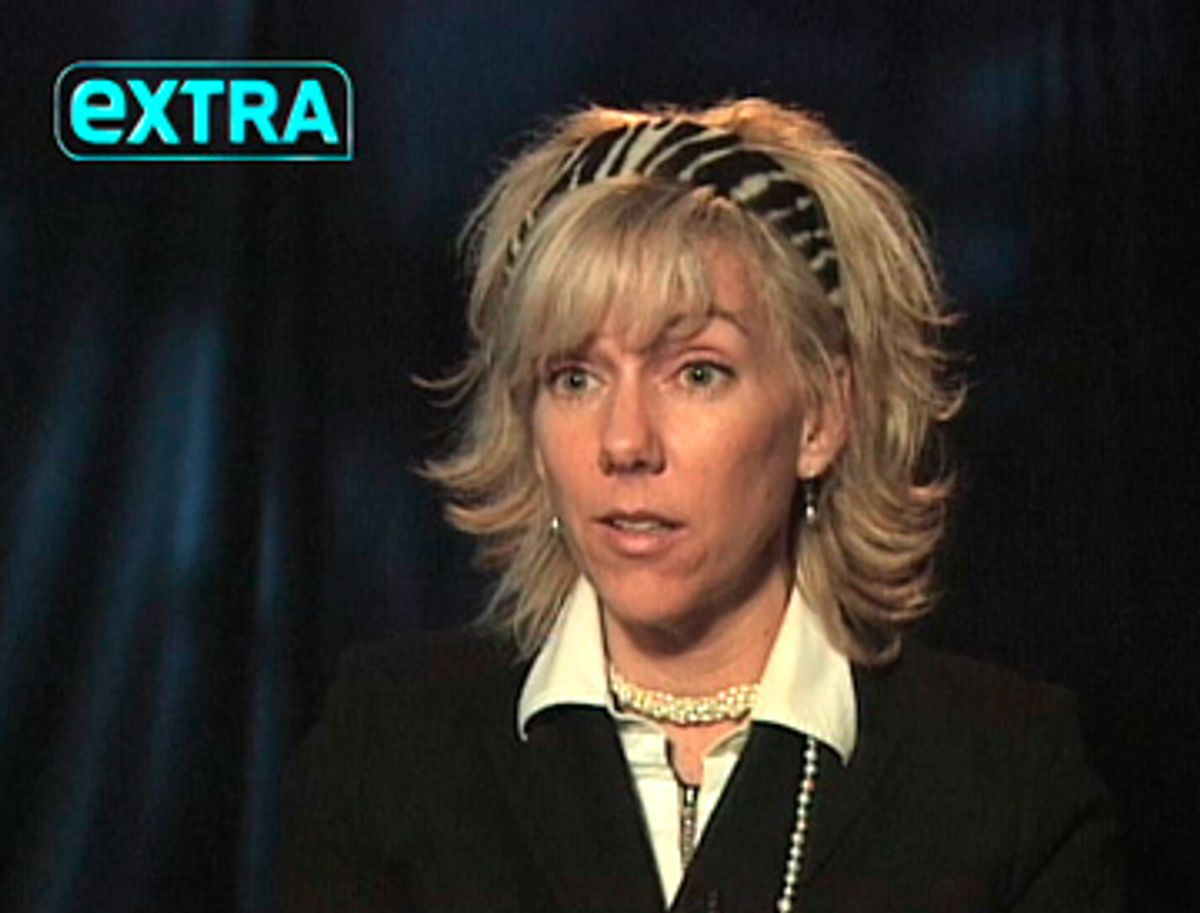 Before John Edwards' mistress was a journalistic curiosity, she was a literary inspiration. Rielle Hunter was the model for the drug-addled Alison Poole, a vapid and endearing Manhattan party girl who appeared in at least three novels by two of the bright lights on the '80s literary scene, Jay McInerney and Bret Easton Ellis.

We can only guess what attracted Edwards to Hunter. He told Bob Woodruff in the now famous ABC interview that he shared the details of the affair with his wife, Elizabeth, and that was all he was saying. By the time Edwards met Hunter in 2006, she had put down the coke spoon and picked up "The Power of Now," a self-help book by Eckhart Tolle. She had remade herself into a New Age guru and was on a mission to help "people wake up in their lives." Whatever the reason for it, the attraction between the well-coiffed Southern politician and the once wild New York party girl has granted added intrigue to this year's political sex scandal.

McInerney, made famous by "Bright Lights, Big City," his highly entertaining descent into the dark side of yuppiedom, briefly dated Hunter in the '80s. He has said he was so "intrigued and appalled" by the hedonistic Hunter and her friends that they became the raw material for his 1988 novel, "Story of My Life." At the time, Hunter was an aspiring Manhattan actress, who ran with a crowd as devoted to cocaine as art. She made the rounds with Ellis and partied with artists Keith Haring and Jean-Michel Basquiat.

"I still remember the first time I saw her," Pigeon O'Brien, a friend of Hunter's in New York, told Salon. "I was going to a party. As I approached, the doors of this 1920s building burst open. [Hunter] and Jay were laughing hysterically and collapsed on the sidewalk together. They looked like Scott and Zelda to me." In fact, like one of F. Scott Fitzgerald's famous characters, Hunter was hiding her own dark family secret.

Hunter, whose given name was Lisa Druck, was born in Fort Lauderdale, Fla., in 1964. Her father, James Druck, was a wealthy attorney, who ABC News reported flew his own plane and owned a horse farm called Eagle Crest in Ocala, Fla. In her youth, according to ESPN, Hunter loved riding and competed in shows across the state on her favorite horse, Henry the Hawk.

But after James Druck got into financial trouble, he allegedly hired a man named Tommy "The Sandman" Burns in 1982 to electrocute Henry the Hawk, so Druck could collect a $150,000 life insurance policy he had taken out on the horse.

In a 1992 story in Sports Illustrated, Burns claimed Druck showed him the technique: slice an extension cord into strands, attach alligator clips to the exposed end of each strand, stick the alligator clips on the horse's ear and rectum and then plug the extension cord into a wall socket. Burns went on to execute a number of horses this way as part of insurance scams for other wealthy equestrians.

"You better get out of the way," Burns told Sports Illustrated. "They go down immediately. One horse dropped so fast in the stall, he must have broken his neck when he hit the floor. It's a sick thing, I know, but it was quick and it was painless."

Burns was among a group of 35 people who were arrested and convicted in the '90s of crimes related to the killings. After Henry the Hawk's death, Hunter reportedly completed high school in Florida and then studied for less than two years at the University of Tampa, before dropping out.

At some point in the '80s, Hunter made her way to New York to pursue acting and fell in with McInerney's social circle. O'Brien described Hunter, who was still going by the name Lisa Druck, as "intense" and a "firecracker." "She was kind of a little unsophisticated," O'Brien said. "She was like a horse just getting its legs. She had this great intellect but hadn't yet harnessed or focused it." In a 2005 discussion between Hunter and McInerney in the now defunct Breathe Magazine, McInerney recalled meeting Hunter at Nell's, a famous New York club. She disputes that they met there, but confesses that "so much of ["Story of My Life"] was real."

"For me you're a little bit frozen in time, a little bit Alison Poole, the 21-year-old party girl in that book who runs around New York going to night clubs, doing drugs, and abusing credit cards," McInerney told Hunter. "And I'm sure that your life wasn't that simple or that extreme or that wasteable." Via a publicist, McInerney declined to be interviewed.

In "Story of My Life," Poole is exactly how McInerney describes her. She is a jaded aspiring actress who lives off an allowance from her rich father, while flitting between clubs, coke and acting classes. "Men. I've never met any," she laments. "They're all boys. I wish I didn't want them so much. I've had a few dreams about making it with girls, but it's kind of like -- sure I'd love to visit Norway sometime."

In one scene, Poole scams $1,000 from a Wall Street type with whom she had an affair -- who gave her a sexually transmitted disease -- by claiming she is pregnant by him and needs money for an abortion. Later, Poole falls in love with a commodities trader with a thing for Shakespeare, but ultimately they betray each other. Poole is not totally unredeemed. She has a blunt, unflinching honesty that McInerney told Hunter in the Breathe interview he drew directly from her.

The novel also echoes Hunter's past and, in some eerie ways, the Edwards affair. In the final chapter, Poole reveals that her father may have killed her prize horse, Dangerous Dan, by poisoning him. And like the current scandal, Poole finds out she is pregnant, but there are two separate men that could be the father. The type of man Poole is attracted to seems strikingly like Edwards. "I like straight guys, I'd never go out with anybody who's as irresponsible as me," she says. "Most of the guys I know have really high powered jobs and make up for lost time when they're not in the office. The Berserk After Work Club. I seem to attract them in a big way, all these boys in Paul Stuart suits with six-figure salaries and hellfire on a dimmer switch in their eyes."

Alison Poole makes return appearances in Bret Easton Ellis' "American Psycho" and "Glamorama" reprising the same Manhattan siren who captivates men and repels women. In one scene in "American Psycho," a woman snipes about Alison, "If you had an American Express card she'd give you a blow job."

Ready for something new, Hunter left New York for Los Angeles to escape the drugs and pursue her acting career. In 1991, she married attorney Alexander M. Hunter III, whose father was the prosecutor in the JonBenet Ramsey case, and the couple lived in Beverly Hills.

Ensconced in the movie industry, Hunter assumed a new role for herself. She legally dropped Lisa Druck for Rielle Hunter and penned scripts for TV and movies with oddball titles such as "Jupiter Where Are You?" "Shit Happens: The Never Ending Search for the Perfect Diaper," and the seemingly porn-ready "It's All About Uranus." None of these treatments appears to have made it into production. Nor did a later idea to create a television series about women who have affairs with men to help them get out of loveless marriages. Hunter's marriage was equally a flop. She divorced Alexander in 1999.

In 2000, Hunter shot her only film credit, a short comedy called "Billy Bob and Them," which she wrote, produced, acted in and directed. The film's cinematographer, George Mooradian, told Fox News that the movie, which was shot in Hunter's home, had little plot and featured New Age-style altars, temples and crystals. Mooradian's agent said he was not giving further interviews.

"She definitely had some connection to the Dalai Lama and Richard Gere, and there was an offer to meet the Dalai Lama," Mooradian has said. With her move to California, Hunter had discovered a new high in New Age spirituality. In Breathe Magazine, she described a dramatic encounter with a healer, who cleared her "energy field," snuffing out her desire for drugs and alcohol. "I became sober overnight," she told McInerney. "And then I became a spiritual seeker -- addicted to higher consciousness, addicted to enlightenment."

Hunter pursued spirituality with the same abandon that she had once pursued drugs. On her Web site, Hunter wrote she spent "thousands and thousands" of dollars on gurus. At one point, she hocked a rare statue of one of her favorites -- Baba Muktananda -- to raise money for a retreat. Hunter said at the 2004 retreat she had a spiritual breakthrough, or, as she later put it: "Shift happens."

In 2005, Hunter and her friend O'Brien crossed paths again. "The first thing she said to me was, 'I am awake,'" O'Brien told Salon. "She said she had achieved some higher level of consciousness."

Hunter set up a nonprofit foundation called Being Is Free to spread her spiritual ideas. The foundation's Web site has been scrubbed from the Internet, although parts of it have been preserved at Deceiver.com. Salon contacted the foundation's directors by e-mail and phone, but they did not respond to inquiries. On the site, Hunter effuses about her spiritual journey, Prada backpacks and her relationships, exhibiting the sense of humor of the old party girl: "I've come to realize through a lot of experience that men are in fact good for a couple of things. Three things to be specific. Penetration, moving heavy objects and causing enlightenment."

Just as she met McInerney, Hunter, in 2006, met Edwards in a New York bar. While he may have been smitten with her in the obvious ways, she was on a messianic mission. Jonathan Darman, a Newsweek reporter, who befriended Hunter while he was covering Edwards, wrote that Edwards was Hunter's latest enlightenment project. "Edwards, she said, was an old soul who had barely tapped into any of his potential." He had the power to "change the world." If Edwards could only tap into his heart more, Hunter believed he could be a leader on par with Gandhi or Martin Luther King Jr.

Hunter set up a video production company and received $100,000 from Edwards' campaign to film a series of short Web films about him. The candid movies were supposed to present John Edwards uncut -- a loose, spontaneous version of the candidate. In the first "Webisode," Edwards jokes and lounges on a plane as he prepares a speech. "I've come to the personal conclusion that I actually want the country to see who I am, who I really am," Edwards said. "But I don't know what the result of that will be."

Hunter, who once sought the media spotlight like a moth does a flame, has fluttered into the shadows since the scandal broke. Her phone number is unlisted and e-mail sent to her personal address bounces back.