A tale of two Beijings

It wasn't the Red Army that killed feudalism -- it was the Olympics. 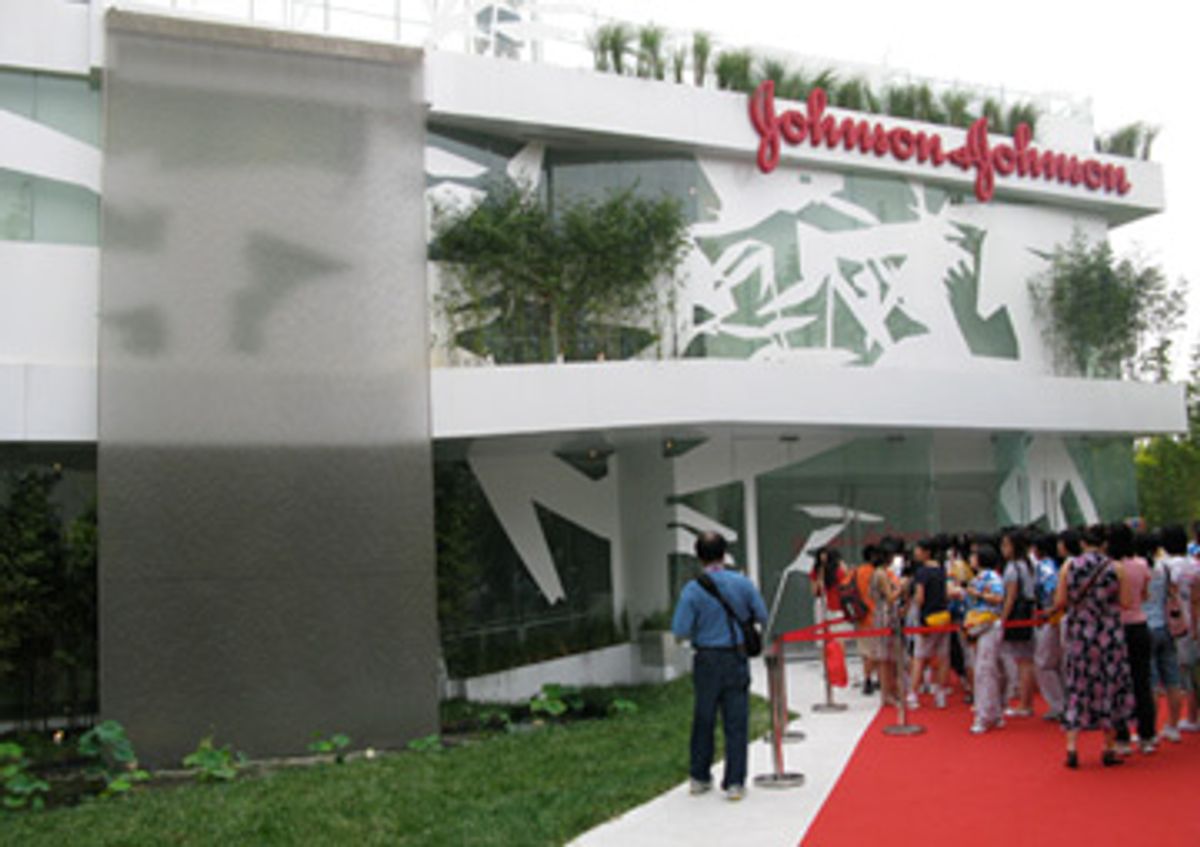 Outside Johnson & Johnson's exhibit space on the Olympic Green.

First, I got a chance to stroll through a monumentally vast concrete civic promenade, so huge as to forever seem underutilized, fitted with huge, gaudy lampposts and lined with the power centers of the new China. No, it wasn't Tiananmen Square, it was the Olympic Green -- or at least the only semi-open portion of the 4.4 square-mile area bounded by the new Olympic Stadium, Aquatic Center, International Press and Broadcast Centers, and, to the north, the enormous new Forest Park, meant to be the jewel of 20 new Beijing green spaces and containing half a million transplanted plant species. More than big enough to comprise its own township, or swallow up Lichtenstein if it liked, the Green also has its own subway line, accessed through pleasant open-air, sub-ground atria.

During the Olympics, this area has been turned into a mini World's Fair, with dazzling exhibit spaces and Disneyland-style parades of uncertain derivation. Or call it a corporate theme park. It's the final landing ground of a massive investment coaxed out of foreign companies wishing to have a future here, in which the Olympics could either be termed a "golden opportunity" or a brilliant ploy in squeezing foreign investors to fork over now or never.

Here, Coke, Samsung and the other major sponsors of the games -- who have been paying an estimated average of $72 million yearly to make that claim -- are doing their utmost in branding for those who get inside (due to security, that amounts to no more than 20,000 a day lucky enough to get government handout free passes -- so few that the exhibitors themselves are complaining). I got mine through the kind folks at Johnson & Johnson, who wanted me to see their spectacularly designed oasis in appropriate cotton white, a respite from all the blazing flags and jingoistic sports imagery, that they have dubbed "The Caring World." Through powerful video testaments of Chinese earthquake survivors and caregivers, set in paper-simulating flat screens, interactive fields of flowers that die when stepped on, and various examples in 3-D of products that save sight and lives, J&J presents an inspiring humanitarian vision. Cooed contented executive Owen Ranking: "We want young Chinese girls or boys to get such an impression from this place that 20 years from now, they'll want to work for Johnson & Johnson."

Guaranteed to dazzle 'em are four actual ancient terra cotta warriors, drawing gasps from large Chinese crowds, shipped down from the archaeological site in Xian, as a special nod to the American company for working closely through its labs to help develop anti-fungal sprays to keep these symbols of China's past glory from quickly turning moldy. Yes, it turns out this army of imperial soldiers forged to stand guard for eternity get a sort of athlete's feet.

Afterward, I got a sneak peek at General Electric's "world of imagination," a somewhat frankly more commercial wonderland, where the high-tech games and darkened rooms illumine bendable lights, high-efficiency locomotives and jet engines, plus fields of actual wind turbines. (Adidas, on the other hand, extols heroism while showing just how many Olympic legends ran in their shoes, in those blessed days before Nike horned in on the action.) Hardly a fan of huge multinationals, I had to admit to being sold on all the environmental and medical innovations on the offing.

I came away fully convinced that in the decades to come, Johnson & Johnson is going to sell a helluva lot of q-tips and save lives along the way, too. Bringing more light bulb sales to light, G.E. could perhaps desalinate enough murky water to save China from its single greatest threat of simple drying out. Indeed, it just may be that China, so in need of drastic intervention and long-term planning to support so vast a projected populace of consumer spenders, will be the place that proves Al Gore's oft-quoted dictum that finding ways to save the earth is going to save American business.

But I was late for a rare chance to attend a concert at the Great Hall of the People, historic scene of party congresses, smack on Tiananmen Square, Beijing's older attempt at awe-inspiring flatness. The performer was supposed to be Andrea Bocelli, the hunky pop Pavarotti, and I figured this would be a VIP crowd. (I'd even stuffed a white shirt and tie in my backpack, if needed.) But the closer I got to the entry, the more I realized that something had once again been lost, or more or less transmuted, in translation. This nearly all-Chinese crowd looked more like my kind, the freebie riffraff, and most were dressed for these hallowed halls of socialism in shorts and sneakers. As I fought my way to one of the two water coolers that constituted the entire source of evening refreshment in the chandelier-chocked lobby, I saw a program displaying a half-dozen stocky operatic types and knew in a flash that Andrea was way too big for this Great Hall -- especially with the amazing giant shimmering Frisbee of a National Opera House just next door.

It turned out to be a show of three upcoming tenors, set to give the crowd their money's worth of over-emotive arias. More suited to the droning speeches of octogenarians, the acoustics were hardly bouncy. But one advantage to a seat in the Great Hall was that it came with desk, shelf and ashtray (now closed shut) usually used by unanimously voting delegates. China's love of classical music is no snob thing, but an enduring artifact of a 19th-century romanticism still perfectly suited to the cruel fates and frustrated longings common in Chinese life. But the house was really brought down when one Italian joined a surprise appearance by three buxom Chinese divas in a rendition of "Wo ai ni zhongguo" (I Love You, China) that would have made even Kate Smith blush.

Shambling out along the stained red carpets, I felt certain that someday I'd come back to China and find the Great Hall of the People rented out for a one-day carpet sale. And trudging along the borders of a blocked-off Tiananmen in search of a place that still might be open for a bowl of dumplings, I couldn't help feeling that all the astounding new construction (to the tune of $80 billion, some estimate, probably including inestimable kickbacks) had finally affected a permanent shift in Beijing's once-vaunted civic balance.

Now, the city had joined so many others built in so slapdash a manner by an Asia hurtling into modernity -- the common hallmark of that modernity being an aspiration toward centerlessness. As with Bangkok, Manila, Jakarta, etc. -- unlike Beijing formed from villages cobbled together -- there was no one power nexus here, not even one place to rally or plead one's case. There was the banking center (Beijing's new CBD, Central Business District, held over 100 skyscrapers on its own), the information technology center, the bureaucratic legislative center, the center for foreigners, the instant "Soho" for fashion, art and design.

Tiananmen, as the ground before palace gates, was as far in the past as G.E.'s turbines were in the future. Feudalism, once the greatest enemy of Chairman Mao, was finally dead and it wasn't the Red Army that had killed it. It was the Olympics.