As the floodwaters rose in New Orleans, "street hustler" Kim Roberts turned on her camera -- and captured a story more thrilling than any Hollywood blockbuster. 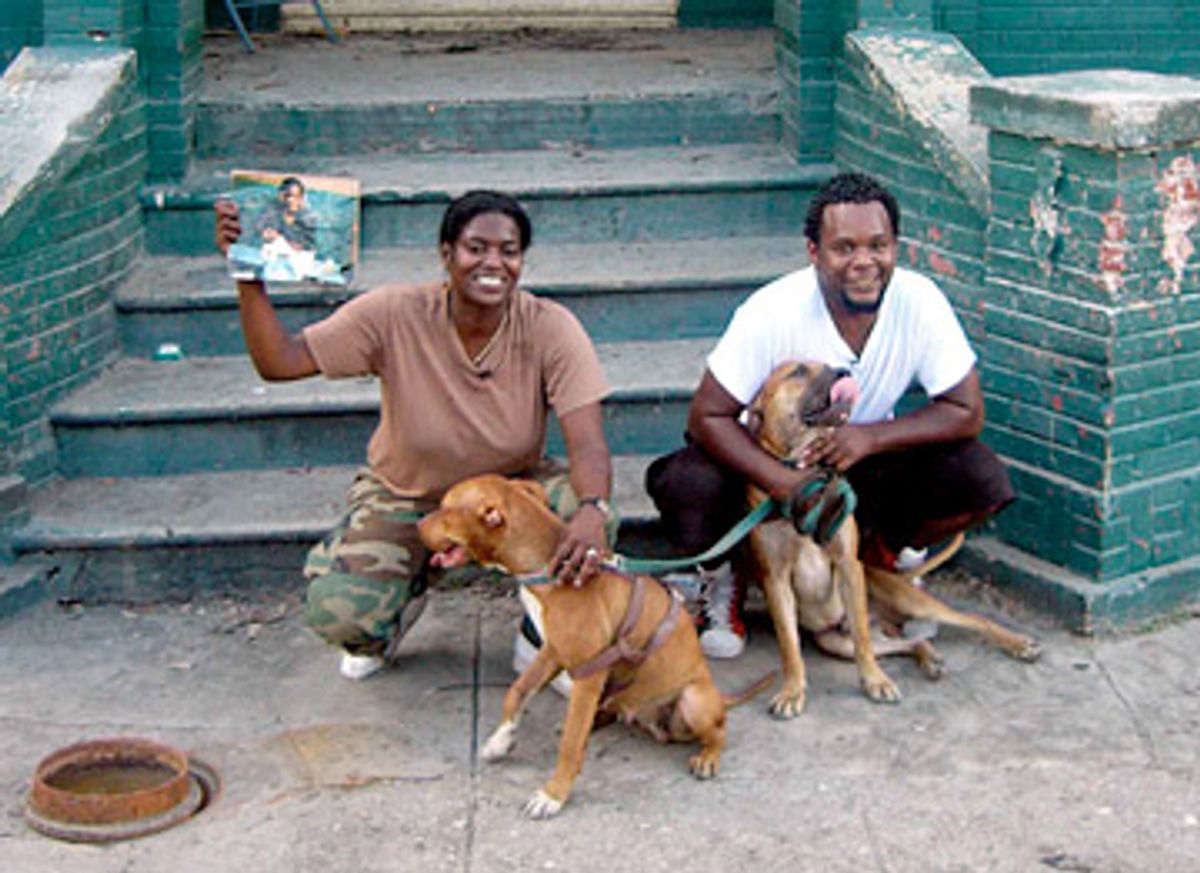 Kim Rivers Roberts and Scott Roberts outside their flood-damaged home in New Orleans in "Trouble the Water."

UPDATE: Correction below. "Trouble the Water" is a documentary made by Tia Lessin and Carl Deal, a pair of professional filmmakers who worked with Michael Moore on "Fahrenheit 9/11," and like other documentaries it's a movie about real people and their lives, designed to enlighten and entertain in roughly equal measure. You could say that all documentary films represent a collaboration between director and subject, but in "Trouble the Water" that collaboration is stretched nearly to the breaking point, since the heart of the film is footage Lessin and Deal didn't shoot.

As they would be the first to admit, "Trouble the Water" only exists because Kimberly Rivers Roberts, a charismatic, trash-talking "street hustler" (her words) and aspiring rapper from the Lower Ninth Ward of New Orleans, turned on her new Sony camcorder -- she'd bought it on the street for $20, provenance unknown -- on Aug. 29, 2005, and began to shoot what was happening in her neighborhood. What was happening, in case you've forgotten, was that a big hurricane passed over New Orleans, the city's levees were breached in many places, and the water on Roberts' street rose past the stop signs and nearly to the housetops.

If possible, Roberts' movie-within-a-movie is even more amazing than it sounds. She captures a tale of courage, heroism and tragedy more thrilling than any Hollywood spectacle; one neighbor, a man Roberts and her husband, Scott, hadn't even liked before the hurricane, risks his life to save them, swimming back and forth across the street using a punching bag as a flotation device. Roberts barely knew how to turn the camera on when the storm started, and her footage is highly uneven. But you can feel her taking ownership of the situation as the catastrophe worsens, doing her own TV-news-style voice- over and alternating between establishing shots and close-ups.

What Lessin and Deal provide is a considered structure that places Roberts' footage within a larger social and emotional context as part of a self-defined life, in which Hurricane Katrina was both tragedy and opportunity. As Roberts makes clear, she's a former drug dealer who lived by her wits in one of the poorest, blackest neighborhoods in the United States. But no person can be reduced to her pathologies, and she's also a married woman with a tremendously likable and loving husband and a supportive extended family, some of them much more affluent. All those resources helped her in her remarkable odyssey out of the flooded Ninth Ward to a Red Cross shelter, where she approached the two white filmmakers from New York (who had been turned away by the National Guard) with the words, "This needs to be worldwide. Ain't nobody got what I got."

[In the first published version of this story, I wrote that Roberts had been a drug addict, and suggested she may have provided other illegal services as well. She says she didn't smoke crack, and was never a prostitute. I'm sorry for the misunderstanding.]

As Anne Thompson observed in Variety, the same survival instinct that led Roberts to deal drugs also led her to save some 25 of her neighbors, and then led her and Scott to her uncle's trailer in northern Louisiana and then to a middle-class cousin's house in Memphis, Tenn. When Roberts finds there the only surviving tape of her rap song "Amazing" -- which she thought had been lost in the storm -- and flows into a dynamite impromptu rendition, let's just say the filmmakers must have pinched themselves to see if they were dreaming. You couldn't script a bring-down-the-curtain, show biz moment any better than that. Robert Koehler, a critic I greatly respect, has suggested that Roberts may have cooperated with the filmmakers in hopes of jump-starting her hip-hop career. I think that's a stretch, but I'm also not sure why the hell she shouldn't.

In many ways, I think Kim Roberts' authorship, not just of her amazing storm footage or her music but of her life, is the true subject of "Trouble the Water." We can have a "national conversation about race" until we all turn blue and keel over from boredom -- Did we have it already? If so, what did we say? -- but people like Kim and Scott Roberts don't generally have their own voices, or any other kind of autonomy. A sometime drug dealer, raised in dire poverty by a mother who died young of AIDS, may be understood by way of abstract categories: She's a symptom of criminal pathology or a symptom of racism, a victim or a perpetrator. She is hardly ever going to be seen as a complicated individual utterly free of self-pity, who believes herself fully in charge of her own destiny.

Watching "Trouble the Water" last January at Sundance, in a theater packed with white folks in upscale ski garb -- other than the Robertses, the only black person I'm sure I saw there was Danny Glover -- was a peculiar, cathartic, almost explosive ritual. Say whatever you want to about the privilege and liberal guilt of that gathering. It's all true. Say that watching a movie in a Utah resort town with a bunch of people flown in from the coasts is an inadequate way to confront the horrifying legacy of Katrina, and that's true too. But that's how it felt. As I wrote at the time, it was hard to imagine anyone sitting through this film without feeling overwhelmed by great grief and great joy, and without being humbled by a sudden awareness of one's own prejudices about the lives, passions and dreams of poor people.

Anyway, this is America, folks; we're not going to have that reckoning in some more mature and considered fashion. We are a nation devoted to Henry Ford's adage that history is bunk, and determined not to learn lessons from the past lest they impinge on our ever-brighter future. Katrina was tough enough to face while it was happening -- remember all the paranoid reports of looting and violence that turned out to be 99 percent racist hysteria? -- and now that it's over (I mean, supposedly over) nobody wants to look at those shocking pictures of crowds of black people outside the Superdome, trapped in a level of squalid misery that suggests Burundi on a bad day. "Trouble the Water" pulls two faces out of that undifferentiated black mass and turns them into recognizable, idiosyncratic and consequential human individuals with complicated stories -- which raises the possibility that all those other people are something beyond dysfunctional units in a broken system themselves.

One of the peculiar media memes of the past year has been a lot of tormented nonsense about whether the ascendance of Barack Obama means that race is somehow off the table as a defining issue in American life. Of course his prospective nomination is a historic moment, but I can't even begin to understand why this is a controversial topic. How can anybody suggest with a straight face that pervasive racism is not the reason why, in a year when every imaginable factor favors the Democrats, Obama is even or trailing in the polls behind an addled, war-hawk septuagenarian who is disliked by his own party?

To me it is Katrina that puts the lie to any fantasy of a race-neutral America. And it's Katrina, not 9/11, that displays the nation's potentially fatal 21st century weakness. While countless billions have been spent converting our society into a police state to prevent another unpreventable attack by a handful of neo-medieval wackos, the story of the ongoing destruction of a historic, majority-black American city -- before, during and after that storm -- has been briskly swept under the carpet or, more accurately, abandoned to investigative journalists, documentary filmmakers, NGO social workers, corrupt or incompetent bureaucrats and other irrelevant social debris.

Thankfully, the Kim and Scott Roberts we get to know in "Trouble the Water" are on the other side of that American story, and they are why it's a movie about hope and not despair. How they'll deal with the momentary and symbolic celebrity this film brings them I have no idea. For the moment, they're back in the Ninth Ward, working new jobs and rebuilding new lives, along with their 7-month-old daughter, who was born in Salt Lake City on Martin Luther King Jr. Day, the morning after the film's Sundance premiere. Over the next two weeks they'll be visiting Denver and Minneapolis, to screen "Trouble the Water" at the Impact Film Festival, adjacent to the Democratic and Republican conventions. I expect Barack and Johnny Mac to be there, crying their eyes out.

Beyond The Multiplex Movies New Orleans