Republicans are already going after Obama-Biden

The text message announcing Biden was joining Obama's ticket went out around 3 a.m. Eastern, and by 6 a.m., McCain had a new attack ad. 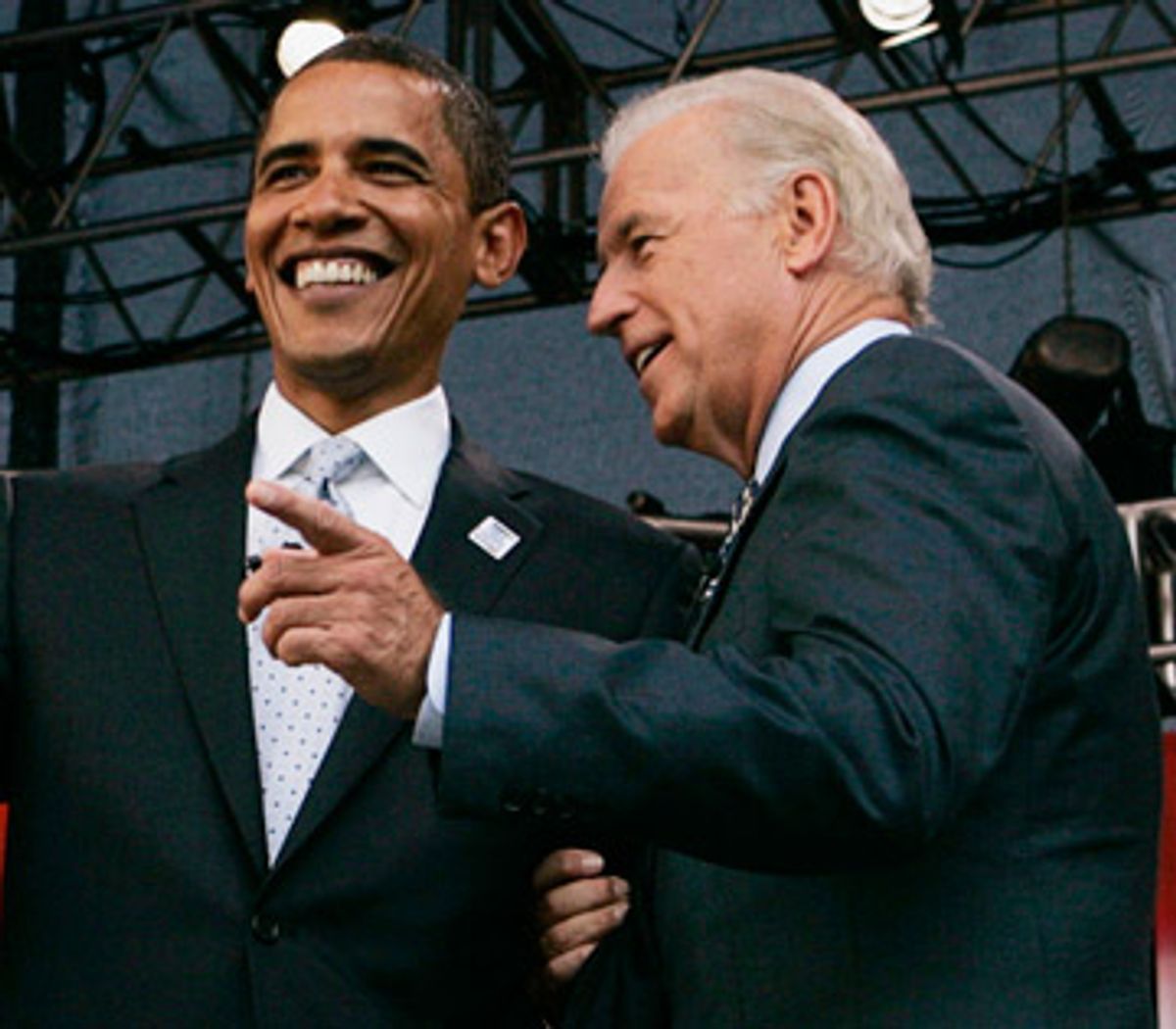 The text message the world -- or at least Barack Obama's most passionate supporters -- had been waiting for went out at about 3 a.m. Eastern Saturday morning, two hours after CNN and other news organizations managed to pry confirmation of Joe Biden's new role out of Democratic sources:

"Barack has chosen Senator Joe Biden to be our VP nominee. Watch the first Obama-Biden rally live at 3pm ET on www.BarackObama.com. Spread the word!"

By the time the sun came up, Republicans had already started attacking. "There has been no harsher critic of Barack Obama's lack of experience than Joe Biden," a McCain campaign spokesman, Ben Porritt, said in an e-mail. "Biden has denounced Barack Obama's poor foreign policy judgment and has strongly argued in his own words what Americans are quickly realizing -- that Barack Obama is not ready to be president."

That's a reference to some of Biden's remarks when he was still running for the Democratic nomination himself; his entire campaign was based on his long experience in foreign affairs and in Washington. (Which is probably part of the reason he got picked.) Biden, 65, who was first elected to the Senate in 1972 at age 29, chairs the Senate Foreign Relations Committee and has also run the Senate Judiciary Committee. This week, as speculation swirled about Obama's running mate, Biden was in Georgia -- at the request of the Georgian government -- observing the end of the country's war with Russia.

He has run for president twice, at one point looking like a strong contender for the 1988 nomination until a plagiarism scandal derailed his campaign. The pick could help reassure voters concerned about Obama's lack of experience in national and international politics. And his Roman Catholic heritage and blue-collar roots in Scranton, Pa., could help Obama with some of the older, lower-income white voters who have resisted Obama's appeal so far.

Biden does have a history of verbal slip-ups and gaffes besides the plagiarism controversy, in which Michael Dukakis' campaign provided reporters with copies of a tape of Biden using -- without acknowledgment -- some quotes from former British Labour Party politician Neil Kinnock. Last year, he stepped on his own campaign announcement by calling Obama "clean" and "articulate." In 2006, he found himself trying to chat up an Indian voter and then saying, apparently to be friendly, "You cannot go into a 7-Eleven or a Dunkin' Donuts without an Indian accent" in Delaware.

But many Democrats seem pleased with the choice, and Biden will surely be a good attack dog for the ticket. "In naming my colleague and friend Senator Joe Biden to be the vice-presidential nominee, Senator Obama has continued in the best traditions for the vice presidency by selecting an exceptionally strong, experienced leader and devoted public servant," Hillary Clinton said in an early morning statement.

Biden and Obama will appear at the old State Capitol in Springfield, Ill., at 3 p.m. Eastern on Saturday as the first rally for the new ticket.

McCain's campaign, meanwhile, has already put out a new ad in battleground states, quoting Biden (from a Democratic debate last year) saying Obama needed more experience, and also quoting Biden (from a 2005 "Daily Show" appearance) saying he'd be happy to run "with or against" McCain, "because the country would be better off." Watch it here, and then just imagine how Biden -- who's never shy or demure, especially when he's challenged directly -- will start to go after McCain to make up for it.