Biden -- and Kerry and Clinton -- go on the attack 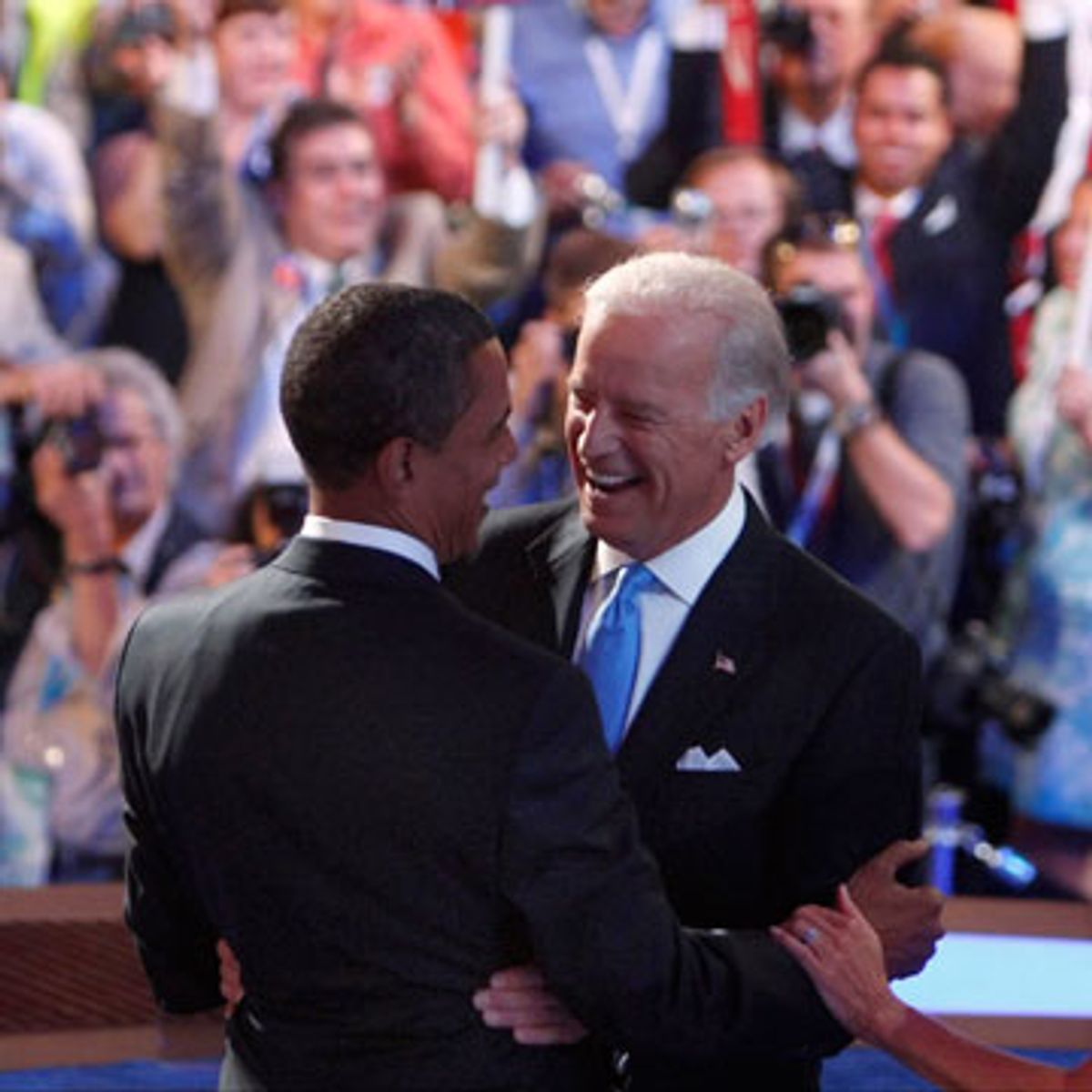 Barack Obama finally took over his own convention Wednesday night, as the "surprise guest" bounded onstage to embrace Joe and Jill Biden. After nearly three days of the distracting sideshow of Clinton psychodrama, the choice in this election was finally framed. As Biden declared in the high-energy speech that the Democrats craved, "The choice of this election is clear. These times require more than a good soldier -- they require a wise leader."

There was a retro quality to Wednesday's convention session, in contrast to the expected fireworks-over-a-football-field frenzy when the Democratic nominee gives his acceptance speech at Mile High Stadium Thursday. On Wednesday, Bill Clinton served as a reminder of the 1990s. John Kerry, who had become the forgotten man of Democratic politics, produced the kind of passionate partisan rhetoric that was all too lacking at the 2004 feel-good convention in Boston. And Biden, whose Senate career predates the rise of the Clintons, delivered (albeit with a few verbal glitches) an old-fashioned stem-winder that would not have been out of place at the 1964 convention.

Forget the Clintons for a moment -- yes, we know it is hard. But persevere. The Denver convention has two overarching political purposes -- to make persuadable voters feel better about Barack Obama and to make them feel worse about John McCain. This may sound like a sandbox guide to politics, but do not underestimate how easily these basics get lost amid the manufactured mania of a convention. This campaign will not be decided by whether the columns that will surround Obama Thursday night are Ionic or Doric; the overhyped theatrics surrounding the roll-call vote for president will not matter in November; nor will the verdict of the electorate depend on the vaporous punditry of TV talking heads. It will all come down to the choice that voters with loose party allegiances make between Obama and McCain.

The up-with-Obama uplift has certainly filled the TV screens since Michelle Obama did her "My Man" number on Monday night. But the trickier element is how to portray McCain, especially at a point when the Arizona senator has been slowly rising in the national polls so that most analysts now consider the race a dead heat. When 21 undecided Denver-area voters at a Sunday afternoon focus group sponsored by AARP were shown a series of campaign commercials, they reacted highly positively to Republican spots portraying McCain as a "maverick."

How can the Democrats combat a Republican nominee, who not only survived a POW camp but also earned glowing press clips for his 2000 presidential primary race and for bursts of independence in the Senate? Despite the populist fervor of Montana Gov. Brian Schweitzer and a few good lines from Ohio Gov. Ted Strickland Tuesday night, the efforts to characterize Obama's GOP rival seemed scattershot and a trifle off-key. There were so many labored jokes about McCain's inability to remember how many homes he owns that his campaign gaffe has gone from fertile Democratic fodder to a please-not-again cliché in less than a week.

But Biden -- and to their credit Bill Clinton and Kerry -- hit on the formula that the Democrats are likely to repeat through November. First, swaddle McCain in praise and affirmations of eternal friendship. "The Republicans in a few days will nominate a good man who has served our country heroically and who suffered terribly in a Vietnamese prison camp," said Clinton. Biden's version: "John McCain is my friend ... It's a friendship that goes beyond politics. And the personal courage and heroism John demonstrated still amaze me."

Then, in a tone more of sorrow than anger, lament how McCain has changed, and imply that he has bartered his political independence for the Republican nomination and the approval of the Bush White House. Kerry, who considered McCain as his 2004 running mate, put it particularly brutally when he said Wednesday night, "Senator McCain, who once railed against the smears of Karl Rove when he was the target, has morphed into candidate McCain who is using the same 'Rove' tactics and the same 'Rove' staff to repeat the same old politics of fear and smear." About all that was lacking was the visual in which McCain morphs into the Herblock cartoon image of Richard Nixon climbing out of a sewer.

Bill Clinton, in contrast, opted for the rapier rather than the shiv. In his telling, McCain is paying the price for his Faustian bargain of claiming allegiance to a political party that has lost its moorings. As Clinton put it, without ever deigning to mention McCain by name, "On the two great questions of this election -- how to rebuild the American dream and how to restore America's leadership in the world -- he still embraces the extreme philosophy which has defined his party for more than 25 years."

But for many casual voters, the Bill Clinton and Kerry speeches never existed, since they were not shown on network television, even here in Denver. That is why Biden's version of the story of Wrong-Way John McCain has more political heft. While the vice-presidential nominee dutifully flicked at the economic argument ("He voted 19 times against raising the minimum wage. For people who are struggling just to get to the next day, that's not change; that's more of the same."), Biden adroitly skewered McCain on national security, the Republicans' ace-in-the-hole issue.

The battlefield was not Iraq, since Biden, like McCain, had voted to authorize the war in 2002. Instead, Biden, as the chairman of the Senate Foreign Relations Committee, brought the political argument back to the half-forgotten, but increasingly lethal, war in Afghanistan. "Should we trust John McCain's judgment when he said only three years ago, 'Afghanistan -- we don't read about it anymore because it's succeeded'?" Biden asked rhetorically. Then, since this detail had gotten lost in the incendiary claims surrounding the Iraq war, Biden added, "The fact is, al-Qaida and the Taliban -- the people who actually attacked us on 9/11 -- have regrouped in those mountains between Afghanistan and Pakistan and are plotting new attacks."

For all the overhyped overnight polling, for all the preening pronouncements of the professional prognosticators, for all the spinning and sowing by the Obama camp and the Republicans, it is difficult to know for certain how a convention has played with the voters until the themes and the message have had a few days to sink in. But for one night -- with Biden's speech, in particular -- the Democrats have tried to borrow from the Rove playbook and transform McCain's purported strength (his national security experience) into a fatal weakness. It's a bold gamble to portray Barack Obama, just four years removed from the Illinois state Senate, as the mature counterpoint to McCain's bellicose instincts. But, judging from initial impressions, it just might work.