I married a Nazi -- the comedy 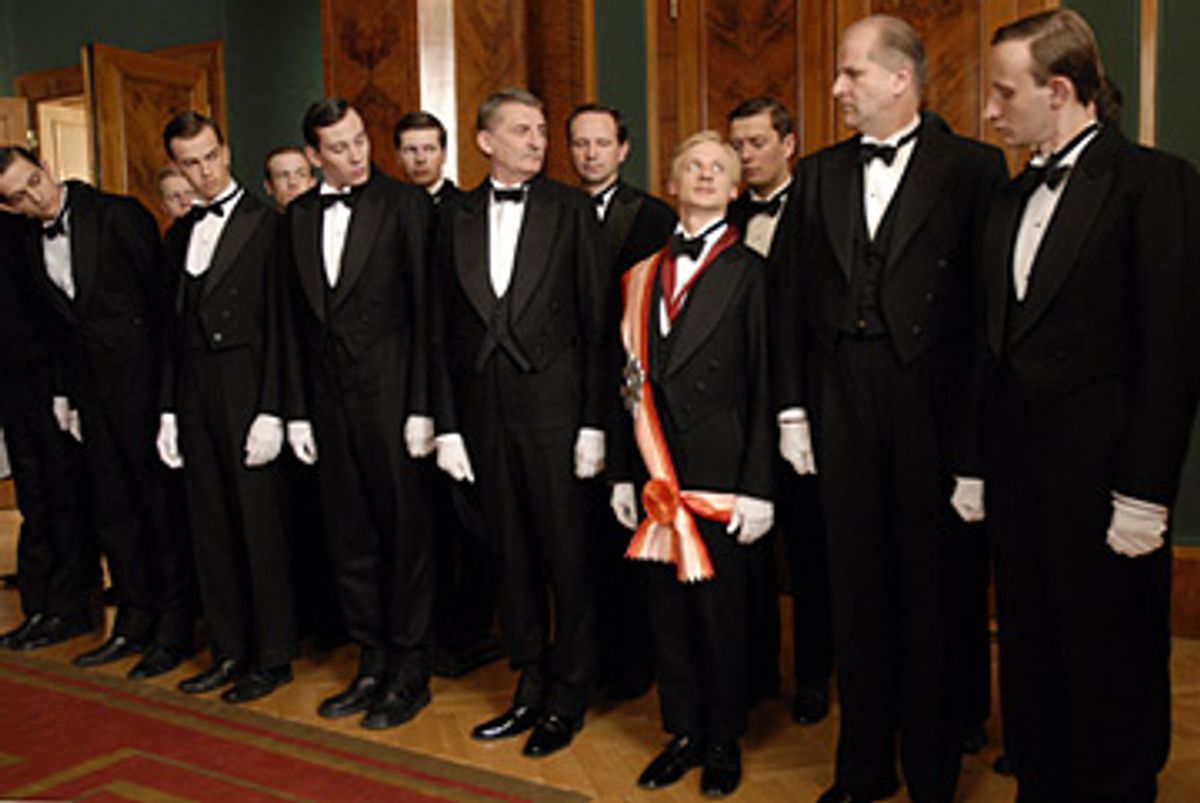 A scene from "I Served the King of England."

"I Served the King of England" feels like a film from another era, and not only because its black-comic picaresque saga unfolds during the 1930s and '40s, before and during the Nazi conquest of Czechoslovakia. It's also an elegant, ironic fable with literary origins (a novel by Bohumil Hrabal) that belongs to a distinctive middle-European artistic tradition -- think "The Tin Drum," both as a novel and film -- with a puckish spirit that sometimes seems sweet and at other times ruthless. Even the picture's chivalrous sexism seems dated, in a manner likely to charm some viewers and irritate others; its up-by-the-bootstraps hero likes to garland his numerous girlfriends' naked forms in flowers and fruit, and belongs to that species of aging boy-man likely to chase lissome young beauties into his grave.

We meet our diminutive Everyman protagonist, Jan Dite, first as an older man (Oldrich Kaiser) being released from prison by the circa-1965 Czech communist regime. Veteran director Jirí Menzel -- an Academy Award winner in 1967 for "Closely Watched Trains" -- gradually fills in the story of Jan's past and wistful, itinerant present, until what at first seems an engaging but slight comedy about a charmed life reveals itself as something deeper and more perplexing. Scrounging for pennies on the streets of Prague but dreaming of millions, young Jan (Ivan Barnev, a deft performer of Chaplin-like gifts) has a mysterious ability to seduce gorgeous women and befriend rich men. From each of his menial jobs he graduates to a better one, until he becomes the headwaiter at Prague's luxurious Hotel Paris, working under a lordly maître d' (the marvelous Martin Huba) who frequently reminds Jan that he earned his immense expertise by serving the king of England.

But Jan isn't merely a fast-rising sexual conqueror, he's also a gentleman (even if of low birth); when he sees a group of hoodlums assaulting a woman in the street, he rescues her and true love ensues. As it turns out, his new flame, Líza (Julia Jentsch) belongs to the disgruntled Czech-German minority, and has the blond pigtails and lederhosen to match. Prague, she tells him, is a "beautiful Reich city," and her attackers were "Slavic Bolshevik scum" who fail to appreciate her beloved Fuehrer. In this part of the film, Menzel's direction walks a knife edge between ludicrous farce and deadly, deadpan satire. Líza will only have sex with Jan while gazing reverently at a framed portrait of Hitler; he spends the war years, while others are massacred, literally surrounded by naked Aryan amazons at one of Himmler's master-race breeding camps (on the grounds of a "Jewish" hotel where he once worked as a waiter).

You can't easily summarize "I Served the King of England" as teaching some kind of historical lesson, but you can say that Jan becomes a Nazi collaborator and a traitor to his own country through an almost Forrest Gump-style combination of optimism, cluelessness and willful blindness. To some limited extent, he's aware of the larger historical narrative unfolding around him, but he doesn't see that it has any relevance to his personal affairs. When he sees a trainload of deportees in striped uniforms being taken away in a cattle car, he is touched and tries to bring them food and water. If Jan never learns the fate of his aristocratic former boss, the royalty-loving maître d' who refuses to return a German officer's Hitler salute, we do. On the other hand, how innocent is a man who self-consciously apes the Fuehrer's hairstyle and mustache, and who submits to racial-purity testing in order to wed his beloved? (Líza is overjoyed to discover that Jan had a German grandfather.)

Arguably the greatest of all Czech filmmakers, Menzel virtually disappeared after the 1968 Soviet invasion that ended the Prague Spring, while his countryman and peer Milos Forman emigrated to fame and fortune in Hollywood. Menzel cites Chaplin and Fellini as his avatars, and both of those profoundly unfashionable influences come through in this grotesque and mysterious comic confection, more bitter than sweet. It's a work radically out of step with contemporary American mores and styles; in a marketplace that ignores almost all foreign-language films in the first place, it stands virtually no chance. If this actually were 1968, the pipe-smoking sophisticates of Esquire and Playboy would be proclaiming "I Served the King of England" a nettlesome masterpiece. For whatever good it does this film today, I'll stick my pipe in my mug and agree.

"I Served the King of England" opens Aug. 29 in New York and Los Angeles, with wider release to follow.