Scores of people are tear-gassed. At least 250 people are arrested. And St. Paul is as militarized a scene as one will see in an American city.

Following up on this weekend's extreme raids on various homes, at least 250 people were arrested here today in St. Paul, Minnesota. Beginning last night, St. Paul was the most militarized I have ever seen an American city be, even more so than Manhattan in the week of 9/11 -- with troops of federal, state and local law enforcement agents marching around with riot gear, machine guns, and tear gas cannisters, shouting military chants and marching in military formations. Humvees and law enforcement officers with rifles were posted on various buildings and balconies. Numerous protesters and observers were tear gassed and injured. I'll have video of the day's events posted shortly.

Perhaps most extraordinarily, Amy Goodman of Democracy Now -- the radio and TV broadcaster who has been a working journalist for close to 20 years -- was arrested on the street and charged with "conspiracy to riot." Audio of her arrest, which truly shocked and angered the crowd of observers, is here. I just attended a Press Conference with St. Paul Mayor Chris Coleman and Police Chief John M. Harrington and -- after they boasted of how "restrained" their police actions were -- asked about the journalists and lawyers who had been detained and/or arrested both today and over the weekend. They said they wouldn't give any information about journalists who had been arrested today, though they said they believed that "one journalist" had been, and that she "was seemingly a participant in the riots, not simply a non-participant." I'll have video of the Press Conference posted shortly.

UPDATE: Video of my exchange at the Press Conference about the arrested journalists is here. Matt Stoller asked a very good question as the last question. Interestingly, all of the standard journalists asked very police-sympathetic questions ("how much property damage was done? were all the criminals part of this same RNC Welcoming Group? How many police officers were injured (answer: none)), while all of the independent journalists -- such as those from the superb, intrepid site, The Uptake -- asked challenging and skeptical (i.e., real) questions.


UPDATE III: Here are several photographs taken from around St. Paul from this morning -- before the march or any of the protests started -- showing how militarized the city was. For whatever reasons, the brigades of police officers would periodically chant military terms and march around in formation ("Double Time!"), while helicopters hovered overhead and Humvees drove by frequently: 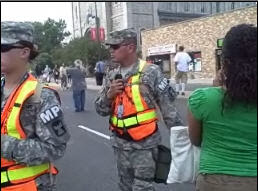 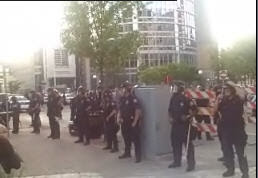 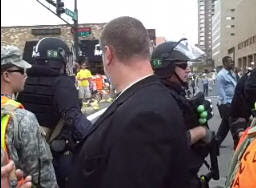 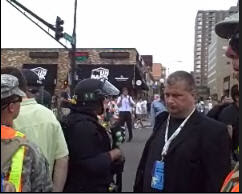 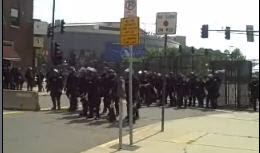 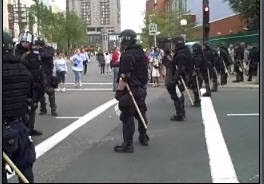 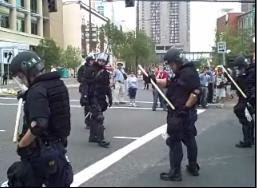 Clearly, and particularly in the wake of this weekend's thuggish raids, the intent was to create a highly intimidating, militarized and high-tension climate.

On a few other notes, Matt Stoller has a few additional photographs of some of the scenes around the city today. A 22-year-old intern from Utne Reader was caught in the middle of a tear-gas assault and was forced to lie on the ground with her hands behind her head for 15 minutes. She took video of the scene here. I'll have an interview posted with her shortly. And Democracy Now is now reporting that Amy Goodman has been released, though there is no word on the two Democracy Now producers who were also arrested -- Sharif Abdel Kouddous and Nicole Salazar (the former of whom typically books my appearances on that show and the latter of whom had a nose bloodied while being arrested).

Finally (for now), here's a woman being pepper-sprayed at close range by a marching legion of police while standing on the side of the road holding a flower.

UPDATE IV: The Washington Post has a few more details on the arrest of Goodman and the two Democracy Now producers. In addition to them, a photographer for Associated Press was also arrested today while covering the protests (h/t Edward Champion). An AP spokesman said of the arrest: "covering news is constitutionally protected, and photographers should not be detained for covering breaking news." Democratic strategist and CNN commentator Donna Brazile was hit by pepper spray on her way into the Xcel Center.

Just as was true for the despicable home raids this weekend, there will be no shortage of people defending all of this (browse through the comment section here to see many such people). The fact that there were some criminals engaged in some destructive acts (who, needless to say, should have been arrested), apparently means that whatever the Police do both before and afterwards is justifiable (just as the existence of some Terrorists justifies whatever the Government does in many people's minds).

UPDATE V: Here is the video as I walked around St. Paul today -- including at the protest march. It also includes war opponent and Iraq veteran Jon Stolz arguing with various pro-war counter-protesters. Almost all of this footage was taken before the protests began and before any arrests were made:


I was with Goodman earlier this afternoon, as she was reporting on the major anti-war demonstration. She and her crew were, as always, interviewing everyone they could in the calm, assured manner that has made the daily Democracy Now! program a widely-watched and well-regarded news programs on radio and cable television stations across the country.

Not only Goodman, but the entire Democracy Now team are professional journalists in the best sense of that term. Those who are simply assuming that they probably got what they deserved -- and who are, more generally, defending the Police here simply because some actual criminals engaged in destructive behavior -- are no different than those who justify anything and everything the Government does because there are some Terrorists out there and they're really violent.


UPDATE VIII: One of the most interesting (and encouraging) stories at either of these conventions is how hordes of mostly young independent journalists, videographers and bloggers have been using new technologies to report intrepidly and insightfully on what has been taking place here in Minnesota. Jane Hamsher has some trenchant observations about those developments and their implications -- here.

UPDATE IX: The two arrested Democracy Now producers told their story this morning with Amy Goodman. The video, audio and transcripts -- including the video taken by Nichole Salazar as she was arrested -- is here.