Bush, McCain and the GOP try to dodge Katrina 2.0

The Republicans cancel most of the start of their convention as Hurricane Gustav bears down on New Orleans, three years after Katrina wrecked it. 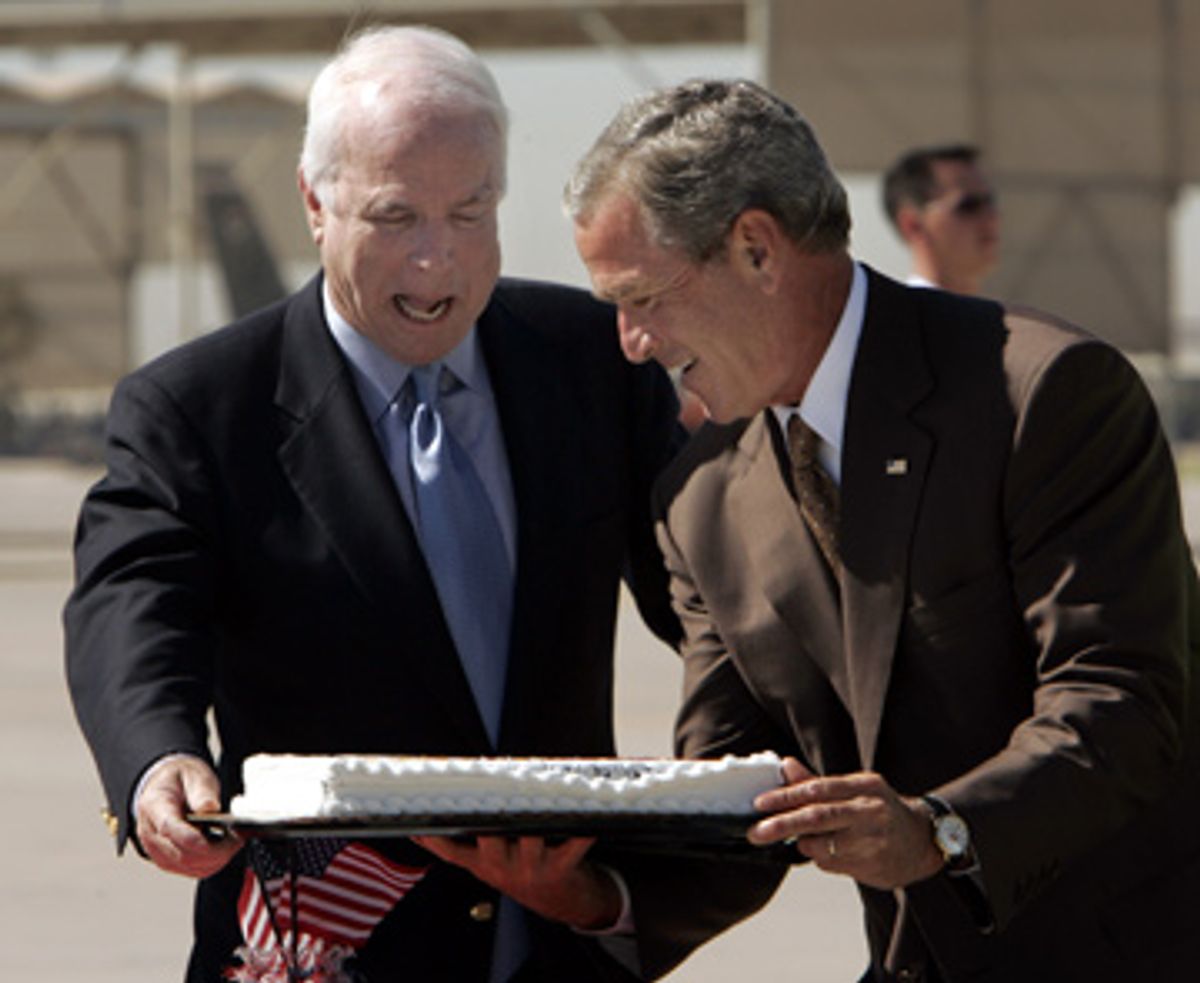 John McCain may not be George Bush's twin on everything, but when it comes to hurricanes, the rivals turned friends are inextricably linked.

Three years ago this week, Bush was in Arizona, celebrating McCain's 69th birthday, when Katrina ravaged the Gulf Coast and nearly destroyed New Orleans. Now Gustav threatens to finish the job, just as McCain's Republican convention gets under way. But Republicans appear to have learned their lessons from 2005. First Bush's appearance in the convention hall Monday, and then the entire Monday program, was canceled Sunday afternoon. Some legally required business will be conducted, but there won't be the kind of fire-breathing speeches that were expected to open the week. McCain aides are taking the rest of the week one day at a time, depending on how hard the storm hits. Both the White House and the rest of the GOP are taking pains to show the kind of concern for the people in the storm's path that the Bush administration couldn't be bothered with the last time around.

The federal response to Katrina was a tipping point for many people around the country. Bush, and the Republican Party, saw their approval ratings slide with each day FEMA dithered in the face of the disaster. The state and local governments (both controlled by Democrats at the time) didn't cover themselves with glory in 2005 either, but what voters from coast to coast remember is the "heckuva job" the Bush administration did. Federal officials seemed to be oblivious to the situation, and that is still hurting McCain now.

Even before Barack Obama arrived at Mile High Stadium to accept his party's nomination last week, the early five-day tracks had turned Gustav into a problematic metaphor for McCain. Having the unpopular Bush show up at the convention at all was going to be dicey anyway; having him speak literally at the moment another hurricane tore through New Orleans was inconceivable. (You might as well just cancel the election and have Obama take the oath of office now.) Small wonder that the first change to the schedule in response to the storm was to scrub Bush and Vice President Dick Cheney from the speakers' roster. Even if the storm weren't forecast to be a monster, they might have felt called to supervise the response if it meant getting away from McCain's show for the night.

"It wouldn't be appropriate to have a festive occasion while a near-tragedy or a terrible challenge is presented in the form of a natural disaster," McCain told Chris Wallace on Fox News Sunday. "So, we're monitoring it from day to day, and I'm saying a few prayers, too." He and his running mate, Sarah Palin -- whose appointment he announced on the anniversary of Katrina's landfall -- headed off to Jackson, Miss., for a photo op with Gov. Haley Barbour to show how concerned they were. The campaign chartered planes to fly the Mississippi and Louisiana delegations back home before the storm hit, and convention officials were planning to rework the entire week.

But McCain can hardly afford to let Gustav wash away his entire convention like just another underfunded Army Corps of Engineers levee. His "maverick" brand was damaged by his own efforts to unite his party behind him during the GOP primaries and by the Democrats' insistence that he represents an extra term for Bush. Obama's convention left him up 6 points by Sunday in the Gallup daily tracking polls (though those polls aren't necessarily useful indicators). "McCain needs to become the personification of anti-Washington rage," one Republican consultant told me. It's hard to do that during a convention that becomes little more than a telethon for Gustav victims without reminding voters of Katrina.

It's also hard to go for Obama's jugular while people are losing their homes for the second time since the last election. If banners and bunting look out of place during a tragedy, so do political attacks. The new theme -- a call for national service -- still fits McCain's broad campaign message. GOP strategists believe McCain, and not Obama, has already dedicated his life to his country. "I pledge that tomorrow night, and if necessary throughout our convention, we will act as Americans, not as Republicans," McCain told reporters in Jackson. "We have to change" the schedule, a McCain advisor said. Of course, for McCain, taking the high-minded approach of canceling partisan events carries some benefit (even if he didn't have much choice) -- it helps reinforce his narrative that he puts principles over politics.

The change to the convention schedule has another downside for Obama, too -- there won't be any footage this week of Bush speaking at McCain's convention, and Democrats were scaling back their own plans for aggressive rapid-response operations pegged to the GOP schedule. Obama was planning his own response to the storm, though he said he was staying out of the Gulf Coast region so his campaign entourage didn't strain local emergency responders. "I think we can activate an e-mail list of a couple of million people who want to give back," he told reporters in Lima, Ohio. "I think we can get tons of volunteers to travel down there if it becomes necessary."

As it happens, this Tuesday -- which could be the first day of regular convention business -- will also mark three years to the day from when I arrived in New Orleans to cover Katrina for Gannett's Washington bureau. I had spent the first days of the storm and its aftermath in nearby Hattiesburg, Miss., helping a paper there cover the chaos that Katrina wreaked on its own community, but when I showed up at the Crescent City's downtown convention center, I wasn't prepared for how angry the disaster made me. Thousands of people were stranded in the streets, most with no food and only warm water to drink days after they had left their homes in search of a rescue that came far too late. I met premature twin babies who looked as if they would die while I spoke to their mother. I took down cellphone numbers for relatives of people I interviewed so I could call their families and let them know their loved ones were alive but stuck in New Orleans. In the three years since then, I still haven't figured out why it was so easy for reporters to get in and out of the city, but so hard for anyone to send buses in for the hurricane's desperate survivors until nearly a week had passed. But that's OK; given the same three years, FEMA officials still haven't figured out how to get most of the Katrina evacuees back into the city. And only time will tell whether the evacuation plans have been improved enough to save lives.

On the flight to St. Paul today, I talked to some Republican delegates who were hoping Louisiana Gov. Bobby Jindal, one of the party's rising stars, would help erase the political scars Katrina left behind by handling Gustav with the competence and confidence that no one mustered three years ago. New Orleans Mayor Ray Nagin -- who bumbled through Katrina before erupting with rage at federal authorities -- and, yes, George Bush, must also be hoping for similar redemption this week. This is a hyper-political time of year. But it's sort of sad to think that thoughts of November 4, 2008, might be more powerful motivators for the people in charge this week than thoughts of Aug. 29, 2005. Even if most of the people in Gustav's path are evacuated to safety, Louisiana, Mississippi and east Texas could suffer terribly, and New Orleans might or might not ever recover. For once, in a campaign that's been nasty for months, it will be refreshing for politics to get back to business as usual.