President Bush is beamed in from afar and Joe Lieberman cheerleads for Sarah Palin, as the Republicans press ahead with a baffling convention. 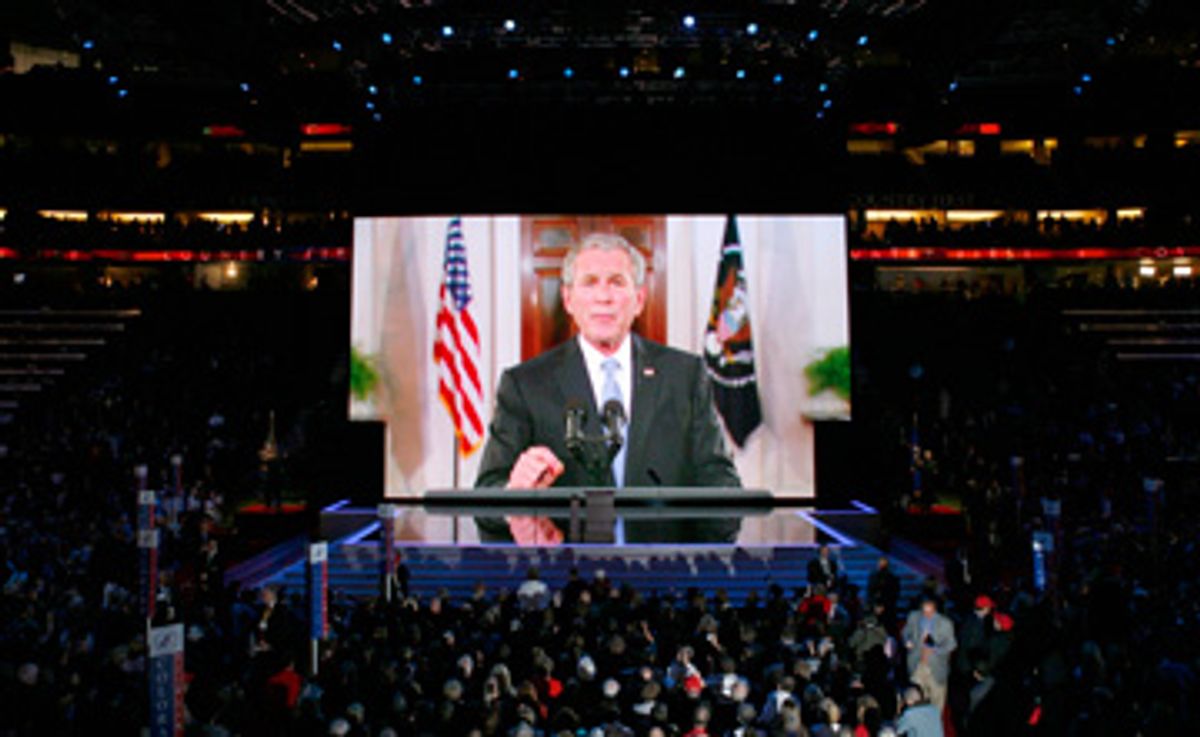 Introducing the Republican platform at Monday night's truncated opening convention session, North Carolina Sen. Richard Burr proudly declared that the document "is about the future not the past." Given the record of the last seven and a half years, Burr's don't-look-back sentiments are easy to understand. But Tuesday night, playing the role of the ghost of GOP conventions past, George W. Bush addressed from the White House the only segment of the American electorate who enthusiastically approves of his record in office -- the Republican base.

Hurricane Gustav was the pretext that kept Bush out of the Twin Cities, although John McCain may have felt that he was saved by the storm. A new CNN poll found that compared to prior presidents, 62 percent of the voters consign Bush to the dust heap of history. (To be technical, 22 percent rate Bush as "poor," 14 percent opt for "very poor" and 26 percent call him "the worst president the U.S. has ever had.") In short, this is not a president with popularity to share.

Bush's appearance on giant TV screens in the Xcel Center had a surreal quality since the president's (presumably taped) remarks did not acknowledge any feedback from the crowd; his words sometimes were drowned out by applause in the convention hall. But it was even stranger that it was Laura Bush alone who took on the challenging task of defending his two-term presidency: "In Afghanistan and Iraq, 50 million people are now living in freedom. And let's not forget that President Bush kept the American people safe."

In truth, Bush's political potency is so diminished that he was assigned the secondary task of serving as a character witness for John McCain, his bitter rival from the 2000 GOP primaries. "Fellow citizens," Bush said in a line that encapsulated his heavy-handed approach, "if the Hanoi Hilton could not break John McCain's resolve to do what is best for his country, you can be sure that the angry left never will." Harking back to prior disagreements with McCain, most of them during Bush's first term, the president declared, "John is an independent man who thinks for himself. He's not afraid to tell you when he disagrees. Believe me, I know."

If the Clintons -- and the constant TV prattle about them -- cost Barack Obama part of the Denver convention, the Bush Factor was a far more serious impediment to McCain. Without Hurricane Katrina blotting the Bush record, the McCain team probably never would have considered the symbolic gesture of giving up an evening of TV convention coverage in deference to the victims of Gustav. The Monday night news vacuum from St. Paul ended up being filled by questions swirling around the surprise choice of Sarah Palin as McCain's running mate.

As a reporter who attended his first Republican convention 40 years ago (please believe me, I was just a student journalist), I find this Minnesota McCain-a-thon baffling. Both the Gustav hiatus and the Palin selection are difficult to handicap politically. Palin is not Dan Quayle Redux, since the 1988 vice-presidential pick was well known on Capitol Hill as a golf-obsessed lightweight. The Alaska governor, in contrast, is still an unknown quantity, with reporters and loyal Republicans alike struggling to fill in the gaps. Fred Thompson, delivering by far the best speech of the evening, offered the first big-time effort at frozen-tundra humor when he said of Palin, "I think I can say without fear of contradiction she's the only nominee in the history of either party who knows how to properly dress a moose."

The high-energy Thompson speech, which was totally at odds with the lethargic pace of his short-lived presidential campaign, took some thinly veiled shots at Obama, "The respect [McCain's] given around the world is not because of a Teleprompter speech designed to appeal to America's critics abroad." But Thompson's primary assignment was to remind the TV viewers of McCain's strongest suit -- his biography. "Now being a POW doesn't qualify anyone to be president," Thompson conceded, "but it does reveal character. My friends, this is the kind of character that civilizations from the beginning of our history have sought in their leaders."

Joe Lieberman -- the man whom McCain wanted as his vice president until the social conservatives rebelled -- hastened his odyssey out of the Democratic Party by addressing his first GOP convention. Lieberman insisted, "I'm here to support John McCain because country matters more than party." A noble sentiment, of course, but one that does not explain Lieberman's cheerleading for Palin, someone whom he has presumably never met. "Gov. Palin, like John McCain, is a reformer," Lieberman said, sounding like he had been handed the standard set of GOP talking points. "She's taken on the special interests and the power brokers in Alaska ... The truth is, she is a leader we can count on to help John in Washington."

With the Bush family now out of the picture -- and Dick Cheney, whose name was never mentioned Tuesday night, at an undisclosed secure location -- this is now John McCain's Republican Party. Two different convention films, for example, featured Teddy Roosevelt, McCain's hyperactive role model. On Wednesday night, McCain's unorthodox choice of a running mate will get her chance to go from "Miss Congeniality" to the "Indispensable Woman" with her prime-time introduction to the voters of the lower 48 states. McCain's own acceptance speech Thursday night will have to confront the big question hanging over this election: Why should the voters, worried about the economy and weary of war, reward the party of George W. Bush with another four years in the White House?