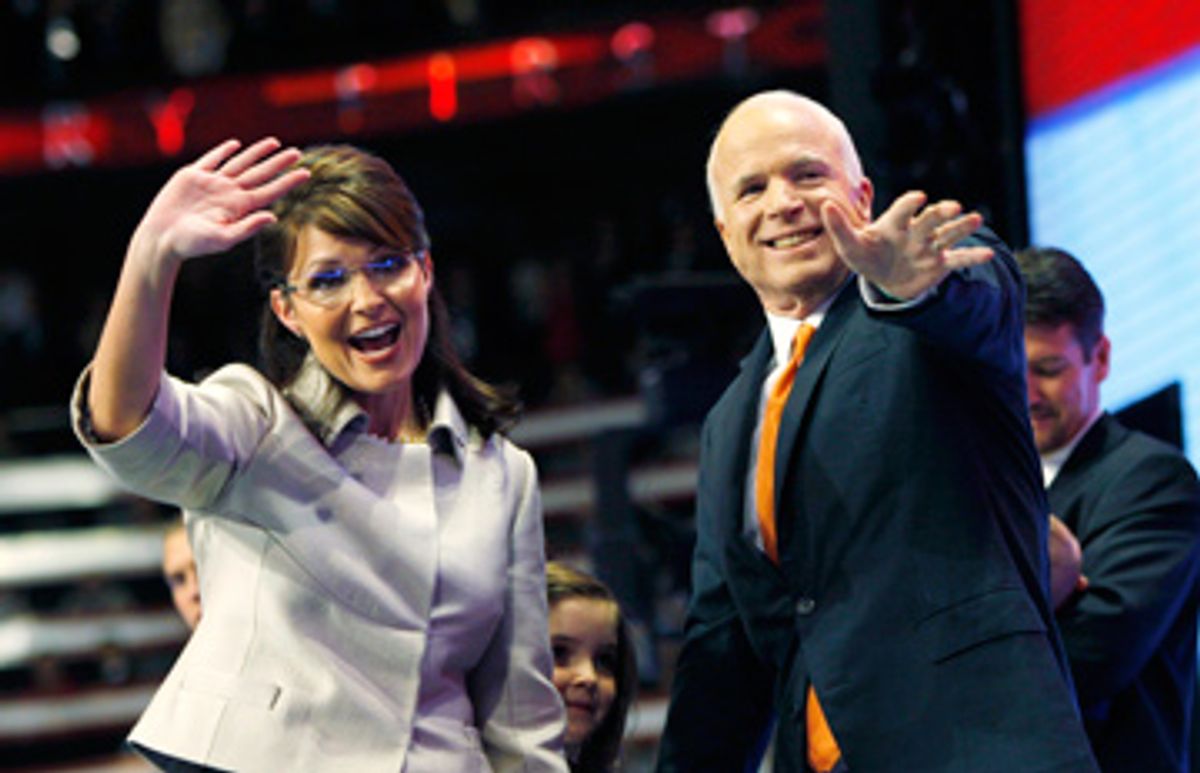 There was relief in John McCain's voice Wednesday night as he bounded onstage at the Republican convention to wild cheers at the end of Sarah Palin's forceful audition for the second highest office in the land. "Don't you think we made the right choice for the next vice president of the United States?" McCain asked in a rhetorical question that hinted at the controversy that has marred Palin's running-mate rollout.

It will take more than a single speech convincingly read off a Teleprompter for the voters to ratify McCain's judgment in choosing the fledgling governor of Alaska as the first woman on a Republican national ticket. But even before Palin delivered the most anticipated speech of the convention, the GOP grass-roots activists at the heart of the party had already embraced her as both a dedicated social conservative and as a martyr unfairly derided by the national press corps.

Palin's acceptance speech harped on the feelings of resentment at the news media that have been festering within the Republican Party since Karl Rove was in junior high school. "I've learned quickly these last few days that, if you're not a member in good standing of the Washington elite, then some in the media consider a candidate unqualified for that reason alone," Palin declared. "Here's a little news flash for those reporters and commentators: I'm not going to Washington to seek their good opinion. I'm going to Washington to serve the people of this great country."

Introducing herself to a national audience, Palin -- the mother of five children and soon to be an (unplanned) grandmother -- lovingly dwelled on her family. But then, flicking at the credentials argument, she suddenly likened herself to every beleaguered politician's favorite president, Harry Truman. Even as Palin talked about how a "young farmer and haberdasher from Missouri ... followed an unlikely path to the vice presidency," the comparison seemed defensive and forced. And, of course, what was missing from Palin's paean to the man from Independence was that Truman spent a decade (what he called "the happiest years" of his life) in the United States Senate and ran a major investigation into wartime government contracting.

Palin is unquestionably the Republican vice-presidential nominee least likely to be confused with Dick Cheney, in either a duck blind or the Situation Room. Even as an angry "hockey mom," it is impossible to imagine her browbeating CIA analysts to concoct new rationales for invading Iraq. It seems equally implausible that in a McCain-Palin administration, the vice president's office would be an outside-the-law power center running its own foreign policy. Palin is not a traditional vice-presidential nominee, but if elected she is apt to mark a return to a modest conception of the office that had been the butt of jokes for nearly two centuries.

While Palin has seemingly survived her fate-in-the-balance moment, it is an odd quirk of history that the Republican Party has regularly been afflicted with a second-banana problem. From Richard Nixon's 1952 Checkers speech -- which was a desperate gambit to avoid being dumped because of a slush-fund scandal -- through Spiro Agnew (1968) and Dan Quayle (1988), the bottom of the GOP ticket has rarely been the tops. Yet for all the drama that surrounded those imperiled veep picks, the Republicans won all three elections in which Nixon, Agnew and Quayle were first nominated for the heartbeat-away job.

Barack Obama had almost disappeared from the Republican dart board during the first couple of days in St. Paul, because of uncertainty over the convention's schedule (as a result of Hurricane Gustav) and the uncertainties surrounding Palin's big-time political debut. But on the third night of the convention, the GOP speakers made abundantly clear that this will not be a turn-the-other-cheek campaign. Palin, for example, delivered a withering putdown of an overhyped aspect of Obama's résumé. Referring to her roots in local government, she said, "I guess a small-town mayor is like a community organizer, except that you have actual responsibilities."

At virtually every Republican convention beginning in 1964 with Barry Goldwater's coronation and the assault on the television networks, there has been an evening when the speakers and the boos from the convention floor reflected the "paranoid style" of conservative politics. At this convention, Wednesday was the night for Minnesota madness. Mitt Romney -- whose hardscrabble life began as the son of an auto executive and Michigan governor -- warmed up the crowd with an incoherent metaphor about the sun rising in the east because Washington has been mistakenly "looking to the eastern elites, to the editorial pages of the Times and the Post, and to the broadcasters." Moments later, Romney continued this wail of powerlessness when he said, "We need change all right -- change from a liberal Washington to a conservative Washington."

Lost in this litany of complaint is that the Republicans have controlled the White House for 20 of the past 28 years, have appointed seven of the nine sitting Supreme Court justices, and ran the House with an iron hand (well, to be precise, Tom DeLay's hammer) for a dozen years until 2007. And, yes, by the way, the editorial page of the Washington Post was initially supportive of the Iraq war.

But Romney was a milquetoast speaker compared with that late-in-life populist, Pitchfork Rudy Giuliani from the great plains of the Upper East Side. The former New York mayor derided Obama as "the least experienced candidate for president in at least the last 100 years." Of course, by the same standards, Palin is far less experienced, unless you count her years wielding major executive powers as the mayor of good ol' Wassila, Alaska. But in Giuliani's eyes, any putdown of Wassila veers dangerously close to a communist plot. "I'm sorry that Barack Obama doesn't feel that her hometown isn't cosmopolitan enough," said Giuliani, whose life is not exactly a testament to small-town values. "I'm sorry, Barack, that it's not flashy enough. Maybe they cling to their religion there."

John McCain has made his decision to cling to Sarah Palin as his running mate. And while the selection of the Alaska governor may not be the gender-gap-closing masterstroke that Republicans initially hoped, it also is not looking like the politically impulsive disaster that the Democrats had envisioned. What Sarah Palin may have underscored on her big night on center stage is that, in the end, vice-presidential candidates are mostly political afterthoughts for the voters.