Sarah Palin is trying to seduce independent voters. But she comes across like a whip-wielding mistress who wants to discipline a naughty America. 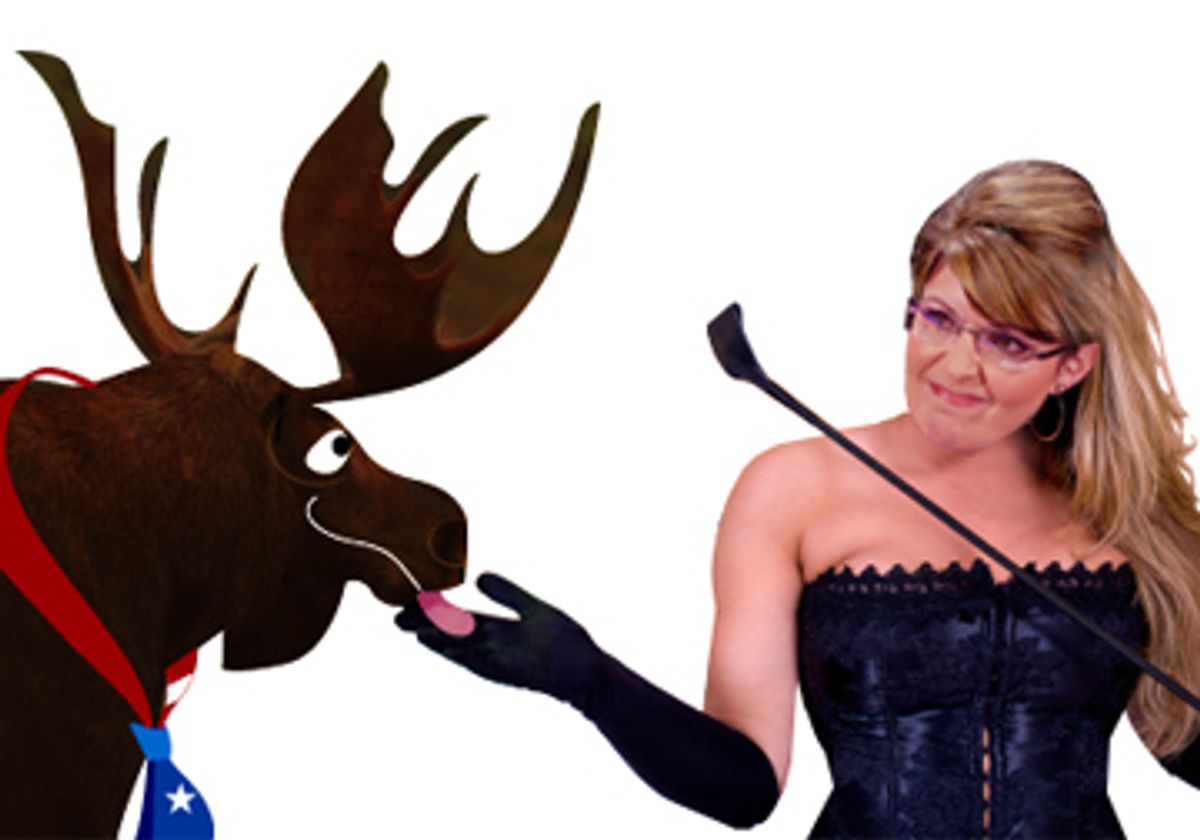 Sarah Palin has thrown a big-time scare into Democrats. The GOP ticket received a huge bounce after the convention, according to a USA Today/Gallup poll, and McCain now leads Obama among registered voters, 50 percent to 46 percent. And it's mostly Palin's doing. The "elite media" that Palin and her fellow Republicans so lovingly excoriated in St. Paul, Minn., is reporting that her entrance into the race may have put crucial states like Ohio in play. The tough-talking, gun-toting "hockey mom" who believes that America's wars are God's will has fired up social conservatives, restarted the culture wars so beloved of Republicans, and shifted the election from being about issues into a personality contest.

Post-convention polls are highly unreliable. But the same Democrats who were crowing with glee a week ago about McCain's off-the-wall choice are suddenly panicking. And you can't blame them. Four years after Americans looked at the first term of the worst president in modern history and decided they liked what they saw well enough to sign up for four more years, it's all too plausible that just when victory is in sight, the most crucial election of our time could be tipped by the 11th-hour appearance of a slick, unqualified, right-wing extremist and religious zealot in designer glasses.

Republican strategists have made it clear that the GOP's only chance to win is by reframing the election as a battle of images. And right now, Palin is the pinup queen in that war. She's feisty, she's a mom, she's from a frontier state, she guns down wolves from the air, she's a devout Evangelical, she poses as a reformer, and she insults the Washington elites.

This latter point cannot be underestimated. Iraq may be a quagmire, a new cold war may be looming, the economy may be tanking and the world may be heading toward environmental doom, but the presidential race may be decided by the perceived doability of the governor of Alaska.

Looks have always played a major role in politics. Nixon lost the famous 1960 debate to JFK because he looked sweaty and devious and, well, like Nixon. John Kerry's resemblance to Lurch, the Addams family butler, probably did not help him. And Palin's perceived babaliciousness, as much as her considerable ability to wield a political hatchet, has brought a spark to the moribund Republican ticket.

Never mind that Palin's absurdly ballyhooed speech at the convention was just a recitation of familiar GOP culture-war clichés, with a disgraceful swipe at "community organizers" thrown in. (Odd -- I thought "big government"-hating Republicans believed in altruism, individual initiative and charity. But apparently they believe in nothing except demonizing their opponents.) Never mind that she is grossly unprepared to be president and was obviously brought in to appeal to women who will supposedly vote gender over issues, and to wield a hatchet in the great veep tradition of Spiro Agnew. Never mind that her claim to be a reformer is about as convincing as the GOP's bogus assertion that she stopped the Bridge to Nowhere.

Never mind that on the issues, Palin and McCain are indistinguishable from George W. Bush. Never mind that the GOP's policies have failed and its ideology is incoherent. Never mind that McCain's speech at the convention was pathetically empty, little more than a display of his torture scars and a bombastic promise to "fight" the very practices he has happily supported as a loyal GOP foot soldier.

No, none of that matters. Because Palin's a woman, and even more, a babe, suddenly she and her party have been magically transformed into fresh-faced reformers. Like Kafka's "Metamorphosis" in reverse, the giant, hideous beetle that was the GOP has suddenly been reborn as a vigorous youth -- one that even claims to be a "maverick."

At a conscious level, the Republican duo are masquerading as reformers who will "clean up Washington." But their unconscious appeal may be more important. By choosing Palin, McCain and the GOP have elbowed the Democrats off the dance floor. In a bizarre turnaround, the uptight Republicans are suddenly the party of sex, women, fun. They're all about spontaneity, bucking convention, letting their freak flags fly. If it feels good, do it! Let Mr. Dignified, Obama, drone on about the economy or the resurgence of the Taliban or whatever boring downer of a subject he wants to lecture us on. Let that long-winded Joe Biden carry us back to that Poli Sci 201 class we fell asleep in. Hey, did you check out Palin's rack? It's party time in America!

It's no use complaining that none of this is fair. It's no use pointing out that the buy-in for the honorable title "maverick" has never been so low, that a born-again Christian ROTC trainee and part- time narc wearing a hippie wig deserves the M-word more than McCain or Palin. The GOP is working the id and the gonads. Let the Democrats appeal to reason -- the Grand Old Party is casting its lot with drives located deeper within America's collective reptilian brain.

Right now, Palin has Democrats quaking in their boots -- and with good reason. But all hope isn't lost. For even if this election turns out to be a referendum on the national libido, Palin may scare off more voters than she attracts.

For the die-hard Republicans who lusted over Palin at the convention, her whip-wielding persona was a turn-on. You could practically feel the crowd getting a collective woody as Palin bent Obama and the Democrats over, shoved a leather gag in their mouths and flogged them as un-American wimps, appeasers and losers. "Drill, baby, drill!" the chant ecstatically repeated by the GOP faithful during Rudy Giuliani's speech, acquired a distinctly Freudian subtext after Palin spoke. The more Palin drilled the Democrats, the more hotly the base yearned to drill her. (We will leave it to shrinks to determine whether the GOP hardcore has the hots for Palin because she's reaming the Democrats, or because authority-worshippers tend to have secret fantasies of being reamed themselves.)

The problem for the GOP, however, is that for independents, Palin comes across as someone who's going to drill them. Strict biblical literalism, trying to ban books, denying human responsibility for global warming and launching nasty vendettas against foes may put lead in the pencil of unreconstructed Bush supporters, but for those who haven't already signed up for the extreme GOP agenda, they're about as seductive as a great white shark in Victoria's Secret lingerie.

Palin was brought in to appeal to women and to independent, socially conservative voters in small towns. But aside from the crude fact of her gender, she has nothing to offer women who don't share her out-of-the-mainstream cultural values. Palin's opposition to abortion is so extreme that she refuses to even make an exception in cases of rape or incest. She sees nothing wrong with Guantánamo, the Bush administration's Big Brother-esque "Protect America Act" and the gutting of habeas corpus. She praises altruism and selflessness, except when Democrats do it (or it involves helping poor black people). She believes that God is constantly intervening in her daily life. These aren't "traditional values" -- they're radical ones. They worked for George W. Bush, but times have changed -- McCain/Palin can't win just with a base of hardcore Republicans and religious fanatics. They need the independents. And Palin's image as a maverick may pull some independents in, but that image is like a rub-on tattoo -- it won't last long.

Palin is a weird political novelty cocktail. Her bitter reactionary taste is disguised by tasty female flavoring, but after the first few sips, you know exactly what you're drinking.

McCain is using Palin as a hit woman and cultural warrior because that's the only thing he can do, since he can't run on the issues. Defending "traditional values" and attacking "elites" and "pointy-heads" and "liberals" who allegedly look down on "real Americans" has a visceral faux-populist appeal, and it used to work on independents and undecideds. But with Republicanism itself discredited, demonizing Democrats and liberals may not be as effective anymore. By definition, most independents are not partisan anti-Democrats any more than they are partisan anti-Republicans. They pick and choose, identifying at times with one position associated with one party, at times with the other. So when Palin attacks Democrats, liberals and secularists, she's also attacking the very independent and undecided voters she wants to win over.

Joe Voter may think Palin is a babe. And at first glance, she looks like the girl next door. But on closer inspection, that house next door turns out to be the Mansion of Mistress Palin (rhymes with "pain"). This isn't a winning electoral strategy except in some parts of San Francisco and New York, which are not likely to go Republican anyway.

McCain's Palin Pinup Ploy was a masterstroke -- no pun intended. But in the end, I suspect most Americans will be driven by their pocketbooks, not their pocket rockets. That is, unless the voters of this great nation turn out to be a herd of masochistic moose, yearning to be field-dressed.