John McCain is connecting with voters 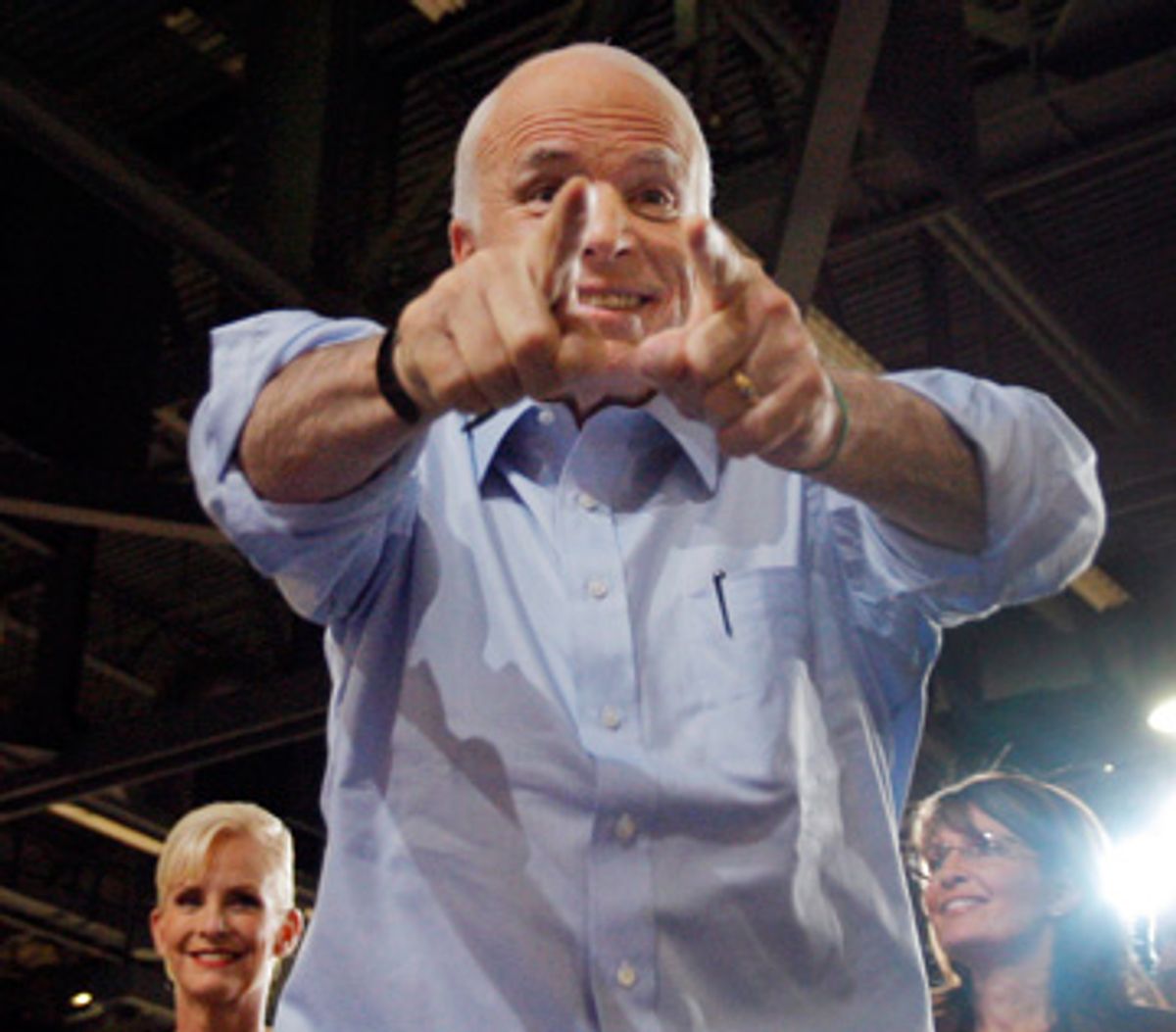 In his careful public statements about the presidential horse race, Barack Obama often sounds like he studied the baseball clichés featured in "Bull Durham" -- clubhouse banalities like, "We gotta play it one day at a time."

At an Ohio press conference Tuesday, Obama claimed, "One of the benefits of having run a 19-month race is that we have been through all kinds of twists and turns ... And my general approach throughout this process has not been to worry about today's news or yesterday's polls." About all that was missing from his answer was the bromide about how "you can't get too high or too low."

In truth, it is difficult for Democrats not to feel rocked back on their heels by the new national poll numbers coming out after the Republican convention. Most revealing are not the overall figures suggesting a knotted contest but Obama's slippage among key demographic groups. In the ABC News/Washington Post survey, John McCain's lead among white Catholic voters has expanded from an 11-point margin in mid-August to a 23-point gap last weekend. The ABC poll also found that McCain is now defeating Obama 50 to 43 percent among independents, while Obama held a 45 to 43 percent edge among unaffiliated voters in August.

There is a danger in being mesmerized by the pendulum swings of national poll numbers, especially since there remains a shortage of reliable state polls that have been conducted since the St. Paul, Minn., convention. But what does seem clear -- and, believe it or not, we are not talking about Sarah Palin here -- is that McCain's acceptance speech, widely derided as flat and forgettable, seems to have connected with persuadable voters. As pollster Andrew Smith, who directs the Survey Center at the University of New Hampshire, put it, "What McCain did best was to connect with the blue-collar vote and portray Barack Obama as the second coming of John Kerry."

Unlike the voice-of-God certainty of cable pundits, hesitancy and honest confusion do not play well on television or on the written page. But they may be the proper analytical approach during this period of political adjustment. "We know that the post-convention bounce has to evaporate," said Karlyn Bowman, a polling analyst at the right-of-center American Enterprise Institute. "But until it does, we can't see the underlying factors in this election."

Everyone has a theory about the cosmic meaning of McCain's vice-presidential choice -- and Sarah Palin will never be confused with Alexander Throttlebottom, the nebbish vice president in George and Ira Gershwin's "Of Thee I Sing." But that is about the only safe bet surrounding Palin. "I'd like to know how well Sarah Palin is going to wear with the voters," said Monika McDermott, a political scientist and polling expert at Fordham University. "The polls are doing whatever they can to capture the dynamic surrounding her. But we don't know how long it will last."

While Palin appears to be a pale image of the pork-barrel-hating maverick of Republican lore, it is indisputable that she defeated an incumbent Republican governor in the 2006 primary, and backed her own lieutenant governor in a primary challenge to scandal-scarred GOP incumbent Rep. Don Young last month. The symbolism of this political independence is not lost on conservative activists. "I don't think that people in Washington understood how depressed and dispirited the grass-roots base was," said Merrie Spaeth, a Dallas-based communications strategist who served as White House media director for Ronald Reagan. "Karl Rove's injunction that incumbents, even tainted ones, can't be challenged is finally dead."

Make no mistake, though; Obama retains some important built-in advantages. "What you have here is a close race," said Robert Y. Shapiro, a political science professor at Columbia University and no relation to the author. "And in a close race, the campaign and campaigning do matter." Few would challenge the Democrats' organizational edge in this area, especially in a state like Iowa (seven electoral votes), which served as Obama's launching pad to the nomination. Pre-convention internal Democratic polls in Iowa, a state that George W. Bush carried in 2004, consistently showed Obama with a double-digit lead. Normally Democratic Michigan (17 electoral votes) aside, most of the too-close-to-call states went for Bush in 2004. As AEI's Bowman puts it, "I think Obama's still ahead if you look at the electoral map."

A mistake commonly made by political junkies is to assume that most voters consume information as voraciously as the junkies do. Eight weeks until Election Day seems like a blink of the eye for those who have been staring at the TV news channels since early 2007, hoping for a flicker of new information. But for casual voters with loose political identities, the election campaign is still a case of too much too soon. Smith, the New Hampshire pollster, shrewdly pointed out, "What we're doing is measuring people's attitudes toward something that won't happen for another two months and doesn't matter that much in their lives right now."

The primary mission of a political convention is to bring wayward partisans back to the fold. By this standard, both Denver for Democrats and St. Paul for the Republicans provided a conversion experience. A Wall Street Journal/NBC News poll released Tuesday evening found that about 90 percent of self-identified Democrats and Republicans now support their party's nominee. This suggests that it might be time to retire the tired tropes about disgruntled Hillary voters and irked social conservatives. The base is in place. To return to baseball-cliché land, the bases are loaded, the meat of the order is coming up and the suspense is so thick you could cut it with a knife. And guess what? It is only September.