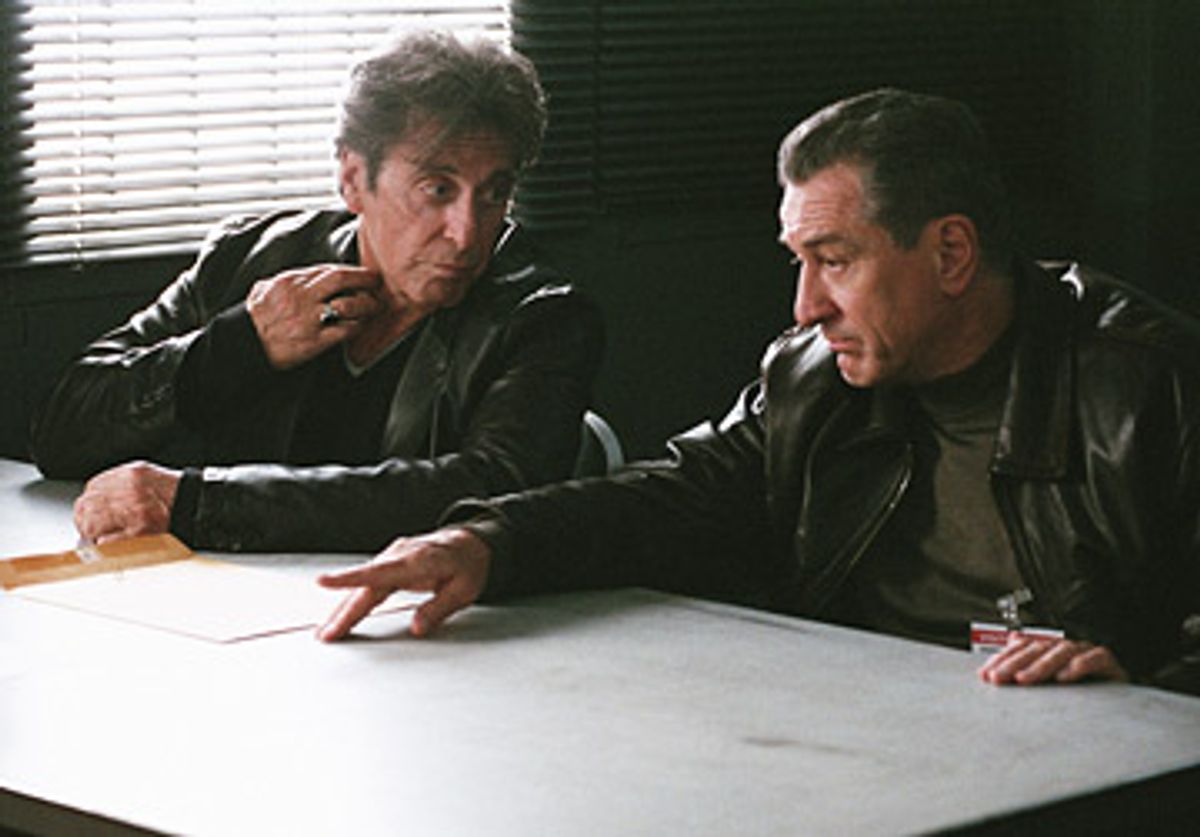 If "Righteous Kill" starred any two other actors on earth, we could call it what it truly is -- a formulaic mash-up of every maniac-on-the-loose cop movie ever made. If it only boasted one of its leading men, we'd note how often he's played that role before: the quintessential tough guy, loose cannon, thick-tongued New York cop. But "Righteous Kill" stars both Al Pacino and Robert De Niro, and slack must be cut.

When the two Oscar winners appeared in "Heat," 13 years ago, they tantalized us, sharing a billing but almost no screen time. Here, Pacino and De Niro spend most of the movie hamming it up in each other's business, and damned if it isn't often a lot of fun to watch.

The premise is as old as revenge itself, or at least as last week's episode of "Dexter": somebody taking the law into his own hands, killing off bad guys whom the system hasn't been able to touch. Years ago, veteran cops, partners and anger-management candidates Turk (De Niro) and Rooster (Pacino) collaborated to plant evidence to send a scuzzbag child murderer away for life. Now, they're investigating a rash of deaths among some of New York's similarly lowlife criminals, and the trail is starting to point toward one of them. Is somebody protecting a friend? Is somebody a ruthless assassin?

Though the story is intercut with the videotaped confession from one roughed-up looking character, matter-of-factly explaining the satisfaction of serial killing, dramatic convention demands a few more remarkably well-telegraphed twists and reveals. We need two hours of red herrings, drawn weapons and cinematic sound bites like "Most people respect the badge. Everybody respects the gun."

We get all that, plus every other badge-flashing convention in the book. We get the rage-induced timeouts from work, followed by the required scenes of tense shrink sessions. We get jokey banter over bullet-riddled corpses. We get tearful victims watching the court turn their unrepentant attackers loose. We get that old chestnut, the guy getting shot and falling out a plate-glass window. As the plot progresses, we get bigger and bigger logic holes, till the whole thing begins to collapse into its own black hole of macho nonsense. Finally, we get the all-time classic: the expository conversation with guns drawn, followed by a chase through a warehouse, followed by a hail of bullets and rasped-out last words. Though Russell Gewirtz is credited with writing the film, surely a great debt must be owed to every other cop movie, ever.

There's no small irony in the fact that many of the movies "Righteous Kill" comes dangerously close to parodying are films that starred Al Pacino or Robert De Niro. Neither actor breaks any new acting ground for himself here, as each draws on his decades of playing nut jobs, cops and nut-job cops. Yet, bless them, both the 65-year-old De Niro and the 68-year-old Pacino still credibly perform like guys still in their prime.

De Niro in particular is showcased as a man in the full vigor of life -- running in a tracksuit, getting in fights, athletically sexing up a much younger colleague with a penchant for the rough stuff (Carla Gugino, her lips curling wantonly at descriptions of police brutality). Also on hand are two nosy junior detectives (Donny Wahlberg and John Leguizamo), the inevitable Brian Dennehy-esque gruff supervisor (played, gruffly, by Brian Dennehy) and the token rap star (50 Cent, overcompensating with raw menace for what he lacks in basic acting skill) as a badass drug dealer, to attract the non-Social Security-collecting demographic.

But despite how easy it would be to write off "Righteous Kill" as one sorry excuse for lazy filmmaking, there is still something utterly mesmerizing in the palpable chemistry between the two leading men. It's like that scene in Ziegfeld Follies when Gene Kelly and Fred Astaire dance together, when two greats share the spotlight and it burns all the more brightly.

As friends and partners -- and possible cat and mouse --- the two have the natural ease of men who seem to genuinely like and respect each other. Their quirky trademark rhythms could cancel each other out; instead, they mesh and enhance. When Rooster refers to Turk as his role model, you believe him. You also believe he might just whack him. The best moments by far in "Righteous Kill" come in the simple scenes of expletive-riddled dialogue between the two, watching how well they both meld their considerable physical intensity with those little glances that suggest their minds are even more worked up than their trigger fingers. Director Jon Avnet generously puts the actors together as often as possible, and the sheer satisfaction of watching Michael Corleone and Travis Bickle spark off each other almost mitigates the utter hokum that permeates every other element of the film.

Now can we just get the two of them in a better movie next time?