Race -- and the race for Ohio

Center-stage again, the Ohio contest between Obama and McCain may pivot on the impossible-to-handicap racial factor. 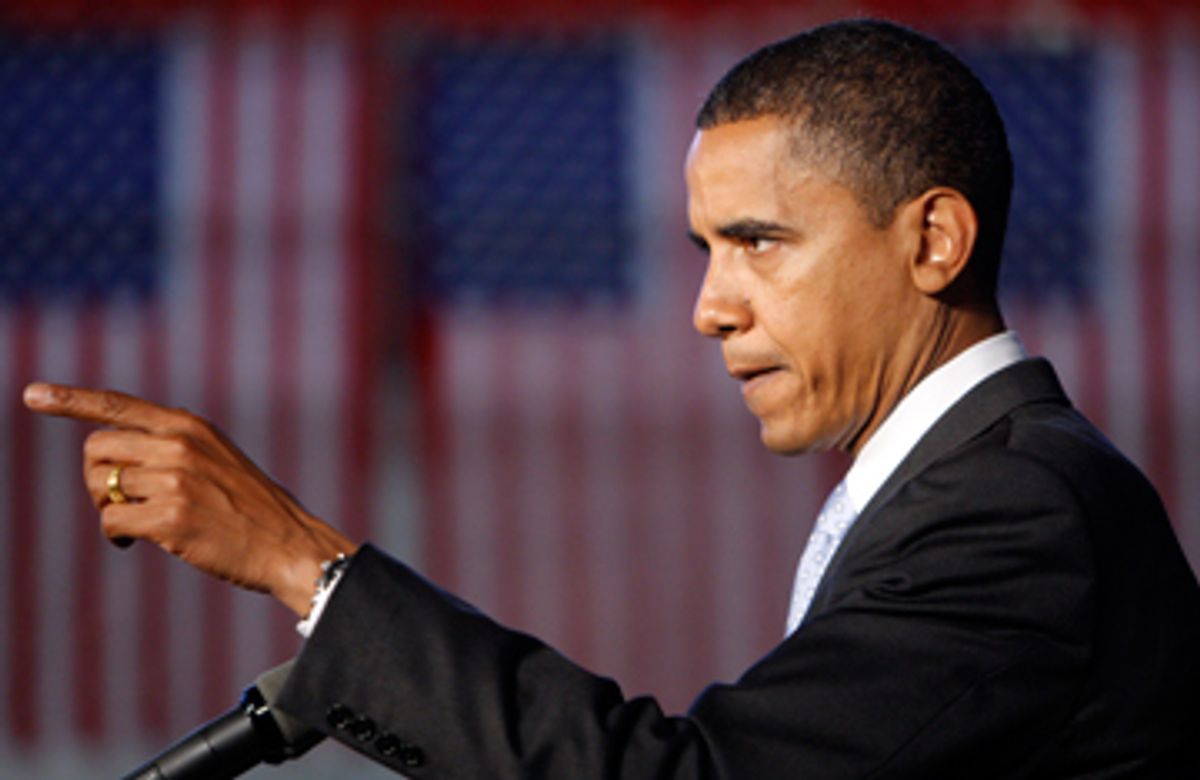 The rest of the political world may be obsessed with Sarah Palin, but the four-letter word that comes up most often in conversations with Ohio political insiders has nothing to do with the overhyped vice-presidential nominee.

What shapes campaign discussions -- both on- and off-the-record with leading Democrats and Republicans alike in this tightly knotted industrial state -- is uncertainty over the electoral impact of Barack Obama's race. No one has the hubris to try to quantify the racial factor (unlike amateur political mavens who exude ill-informed certainty) and no one dismisses the chances of Obama winning Ohio's 20 electoral votes. But with early voting scheduled to begin here Sept. 30 (another first for Ohio), there is an undercurrent of nervousness among Democrats about the party's great experiment in nominating Obama.

"I know there is a real concern out there that some people who normally would be voting Democratic might not vote for an African-American," said Tim Burke, the Democratic chairman of Hamilton County (Cincinnati and its suburbs). "Gov. [Ted] Strickland has spoken openly about this." Campaigning for Obama in Jackson County in the Appalachian southeastern corner of the state earlier this month, Strickland declared, "I'm going to talk about the elephant in the room -- and I'm not talking about any Republican. The elephant in the room is what everybody's thinking but nobody willing to talk about ... it's race."

In 2004, John Kerry came within 118,000 votes of winning Ohio and the White House. But while Ohio may be a swing state, it also shows unusual internal political stability, with only two counties changing their party allegiance from the 2000 to 2004 presidential elections. "The biggest difference between the Obama campaign and Kerry in 2004 is race," said Mike Curtin, an Ohio political expert who recently stepped down as the associate publisher of the Columbus Dispatch and continues as a consultant to the paper. "You can't avoid it, since Hillary Clinton trounced Obama here." While Clinton won the March 4 Ohio Democratic primary by a 53-to-45-percent margin, she overwhelmed Obama among white voters by 64 to 34 percent, according to exit polls.

It does not take a UFO hunter to find Ohio voters who believe that Obama is ... well ... alien. Having breakfast Friday morning at the counter at Paul's Restaurant in Whitehall, a blue-collar suburb of Columbus, retired aircraft designer Richard Beard stressed that he knew all that he needed to know to vote against Obama. "Anyone who won't salute the flag or say the Pledge of Allegiance isn't worth voting for. And Obama doesn't have an American birth certificate or one that you can believe. The one from Hawaii is a fake." But the bearded Beard, an original Ron Paul supporter who was wearing the black baseball cap that the NRA gives its $1,000 donors, would have been an unlikely Democratic voter even if Obama had been born in the Ohio State end zone on a football Saturday. Smitten with Palin, Beard said, "She doesn't throw in any of that doublespeak like other politicians."

Palin has unquestionably roused the Republican faithful, like financial planner Peter Stadler, who gushed over breakfast at Paul's, "She's dynamic. She's more capable than Barack Obama." Jon Seaton, John McCain's regional campaign manager in charge of Ohio and Pennsylvania, said, "We've run across a large number of Hillary Clinton supporters who were very much looking for a political home and were very interested in who McCain would pick as his vice president." But it is difficult to find evidence in the polls that Palin has done more than electrify the GOP's base.

A striking feature of the University of Cincinnati's Ohio Poll, which was released Friday, was that while McCain is winning the support of 90 percent of Republican voters, Obama is only picking up 82 percent of the Democrats. These differing levels of party loyalty -- which might (note the conditional tense) be attributed to Palin for the Republicans and Obama's African-American heritage on the Democratic side -- partly explain why McCain leads 48 to 44 percent in the survey. (A Quinnipiac University poll gave Obama a 49-44 edge in Ohio over McCain, which underscores why slavishly following the gyrating surveys can be an exercise in frustration.)

But polls, which tend to put the undecided vote in single digits, may understate the volatility of the race. In the Ohio Poll, 19 percent of the state's voters said that they could change their minds before Election Day and another 4 percent were undecided. "I think voters know less at this point about Obama than they do about McCain," said Eric Rademacher, the co-director of the Ohio Poll. "The people who were saying that they could change their minds are those who normally don't pay attention to politics until after the convention."

Chris Francis, who works for an international glass company in its supply-chain department, is a classic don't-bother-me-with-politics-yet voter. Over lunch Friday with colleagues at the Mad Greek Restaurant in Whitehall, the 30-something, goateed Francis said, "Usually about a month before the election, I start to read up on the candidates. But it's been a crazy summer, so I really haven't checked anything out." A Clinton voter in the primary, Francis has not been won over by the Democratic nominee. "I wasn't much impressed with Obama," he said. "He promises a lot of things that are out of his control -- like having a great job or cheaper gas prices."

Those who live with cable news droning in the background or check out the rolling national poll averages at Real Clear Politics three times a day can easily lose sight of the reality that many voters take a casual interest in the campaign this far from the election. Francis, for example, said about Palin, the woman who has launched a thousand talk shows, "I don't know much about her. She's from Alaska and her daughter's pregnant. That's about it."

Karen Porter, an economically hard-pressed longtime waitress at Paul's ("I used to be on a beer budget, now I'm on a bus budget"), would be what political scientists call a "low-information voter," if only she were registered. Attracted to Obama ("I think he really cares about people in the middle class"), Porter is tempted to vote for the first time. When asked about his Republican rival, Porter said, "I don't know much about McCain. I hear a lot about his vice president. What's her name? The one from Canada."

Young voters and possible new registrants like Porter are part of the Democratic formula for victory in Ohio. But organization, a hallmark of the Obama campaign, may represent the Democrats' best shot to improve on Kerry's 2004 vote total in Ohio. With about 250 paid field organizers in the state and another 1,300 volunteers coordinating the precinct-by-precinct campaign, Obama has a significant on-the-ground edge over Kerry. Trying to hoard campaign cash in 2004, the Democrats farmed out much of their get-out-the-vote effort in Ohio to independently funded groups like Americans Coming Together (ACT) with whom the Kerry campaign was not legally allowed to share information. The result: The Democrats exceeded their vote projections in Ohio's cities and were overwhelmed in the rest of the state by a better organized Bush campaign that handled everything internally.

Since the moment that Barack Obama declared his epoch-making candidacy, 2008 has been described as a history-making election so often that the notion has become an instant cliché. But Ohio is a state where tradition dies hard. Which may be why Rademacher, the pollster from the University of Cincinnati, is close to the mark when he theorizes, "At the end of day, despite all the talk about how unconventional this election is, it may come down to the most conventional outcome -- a campaign decided by independent voters."

While the national electoral terrain appears to be broader than it was in 2004 with once reliably Republican states like Virginia up for grabs, there is no place more likely to be in the bull's-eye than the Buckeye State. In theory, it is easier for Obama to get to 270 electoral votes without Ohio than McCain. But, in reality, this is a state that should silence the doubters who wonder, "Why-o, why-o Ohio?" For Ohio has gone with the White House winner in the last 11 elections – and 2008 is apt to make it an even dozen.