Money talks, Barack. Are you listening?

With the fall of the Dow, Obama has the chance to change the national conversation to something more important than moose hunting. 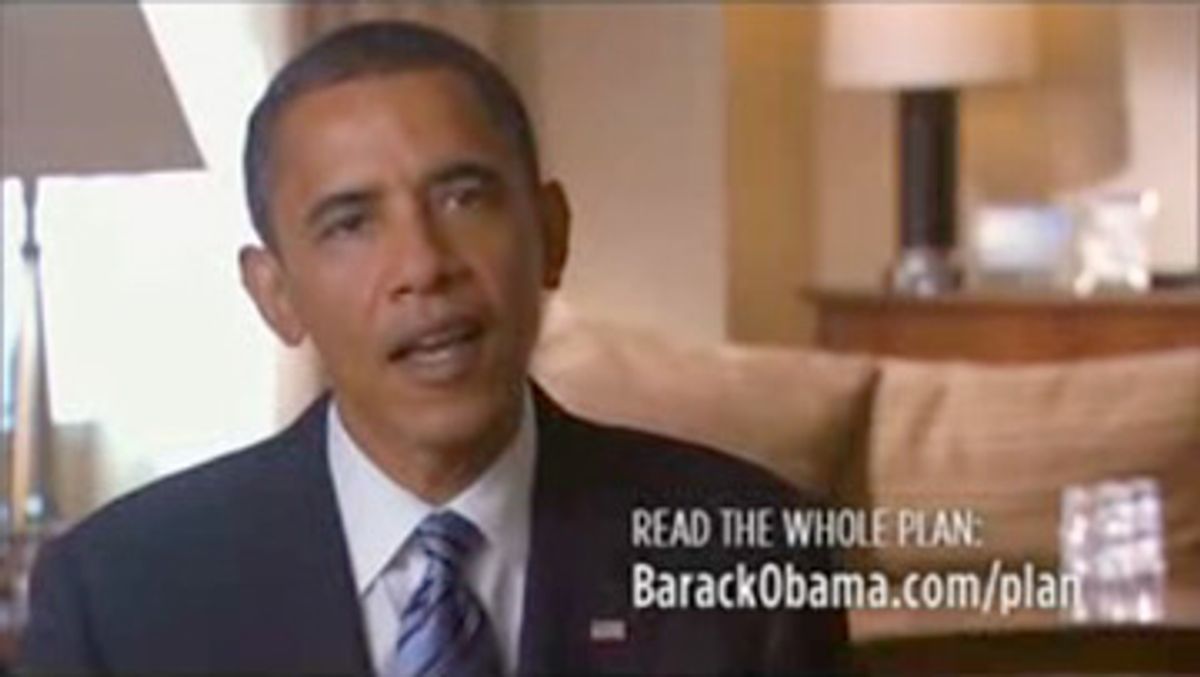 Who would have guessed even two weeks ago that Lehman Brothers would loom larger in the presidential campaign than the Bush brothers or that AIG would be worrisome initials for the GOP? The withering of Wall Street is a reminder of how quickly the political dialogue can switch from tanning beds to tanking investments.

In almost every election campaign, the Democrats trumpet economic issues while the Republicans hawk national security. Throughout this political season, Barack Obama has held a consistent, usually double-digit, lead over John McCain as the candidate most trusted to handle the economy, according to the Washington Post/ABC News poll. As Democratic pollster Mark Mellman puts it, "There is no question that the Wall Street meltdown focuses attention on the economy. And that has to help the Democrats. Suddenly moose hunting doesn't look all that important anymore."

But Barack Obama -- like John McCain -- has yet to find a formula to fit the new economic equation. The policy proposals that the Democratic nominee advanced Tuesday in a speech in Colorado were solid but soporific. It is difficult to imagine that an Ohio voter, fretting over collapsing banks and brokerage houses, would be calmed by Obama proclaiming as the hefty second plank in his reform plan: "We must reform requirements on all regulated financial institutions."

Small wonder that Obama chose a different artistic direction Wednesday morning when he released a new TV ad in which he speaks to the camera for two minutes, which is "War and Peace" length for a political spot. Even though the Democratic nominee begins by talking about how "Wall Street's been rocked," only one sentence in the lengthy commercial offers a remedy that touches on the current crisis: "End the 'anything goes' culture on Wall Street with real regulation that protects your investments and pensions."

McCain's approach to the money-market meltdown has been even more off-key in ways that go beyond his politically maladroit claim Monday that the fundamentals of the economy are "strong." The bulk of McCain's speech on the financial markets in Florida Tuesday was a greatest-hits album about reform that seemed to imply that congressional earmarks had something to do with the fall of Lehman Brothers. McCain did channel his inner Teddy Roosevelt by repeatedly denouncing "greed" and the pursuit of "easy money" on Wall Street. But this kind of angry rhetoric was cheap-shot populism, since nobody expects altruism and selfless behavior from the financial markets.

"This crisis is an audition for the presidency in real time -- and an opportunity for a candidate to step up to the plate," says Bruce Reed, who was Bill Clinton's chief White House domestic advisor and is now the president of the Democratic Leadership Council. "If handled the right way, it could decide the election. If it is treated like another political issue, it could fade with the next news cycle."

But so far both candidates have been unable to resist the bait of political attacks. On "Good Morning America" Wednesday, McCain argued, a trifle bizarrely, that the Democratic nominee is ill-equipped to clean up Wall Street because "Sen. Obama has never taken on his party on any major issue. This requires a reformer." In his address on the market mayhem Tuesday, Obama went after McCain with far more vehemence than he attacked Wall Street. In a rare moment of charity, Obama conceded, "Now I don't fault Sen. McCain for all of the problems we're facing, but I do fault the economic philosophy he subscribes to."

No one should realistically expect McCain and Obama to suddenly refrain from political invective in the midst of a low-road presidential campaign. But these dueling sound bites inevitably lead voters to cynically dismiss both candidates as credible messengers about Wall Street. "Voters are looking for a leader who will fix this and make it better," says Republican pollster John McLaughlin. "They want reassurance that their savings and their college savings will be there and that their house will not go down in value."

With Wall Street roiling, it is impossible to reliably poll about the immediate political fallout because the tone of the news shifts from hour to hour. So, in effect, everyone in politics is theorizing without hard evidence. "Normally, you'd say that this would give an advantage to the Democrats," McLaughlin argues. "But you have a situation where Obama has been running against experience for the last two years -- and now it's coming back to bite him."

Normally about this time, the presidential campaign goes into freeze-frame as the candidates prepare for the opening-gun presidential debate Sept. 26 in Oxford, Miss. This could be the moment when Obama or McCain takes command on the issue of the woes of Wall Street, although the subject of this first fall face-off is ostensibly foreign policy. It would be a safe bet to assume that both candidates will frequently declare insolvent investment banking houses to be a "national-security issue."

In large measure, both Obama and McCain won their nomination fights because their personal stories and positions on Iraq resonated with their party's base. Forcing both of them to now fight it out on the economy is akin to decreeing that the winner of a three-legged race gets to move into the Oval Office. Throughout his quarter century in Congress, McCain had displayed only intermittent interest in economic issues, unless somehow you count campaign-finance reform. Obama's mantra of change is more flexible, but the Illinois senator still has to convince the voters that he can be the presidential candidate who also offers safety and stability.

Democratic pollster Paul Maslin captures the political reality of the week when he says, "This is a shock wave -- and the story is not going away. You have two armies out there searching for the high ground. And the high ground is defined as using the mechanisms of government to back things up on Wall Street."

So far Obama and McCain have not had much new to say about the carnage in the financial markets. In a political campaign this close, there is a risk in departing too boldly from pre-existing positions and well-honed talking points. But the quest for the presidency involves something elusive and hard to define called leadership. And that, alas, has been hard to detect amid the predictable political rhetoric about the worst Wall Street crisis since the days of radio bulletins and ticker-tape stock quotes.