Peripatetic Asian-American indie-film hero is back from J.Lo exile with a double bill of intriguing new low-budget films -- and YouTube distribution. (A podcast and interview.) 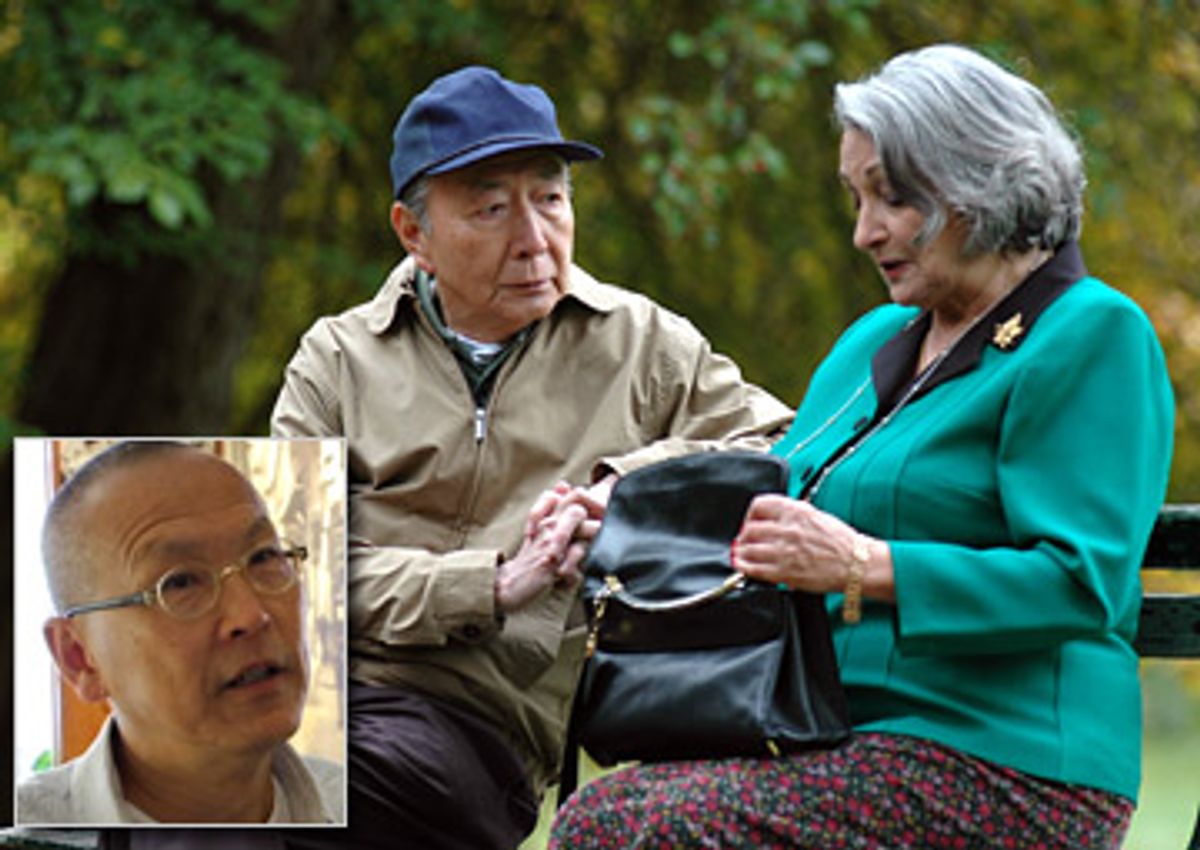 Wayne Wang emerged on the film scene 25 years ago with "Chan Is Missing," a glorious and mysterious black-and-white indie made on 16mm film and almost no budget in San Francisco's Chinatown that opened the doors on a world few non-Asian Americans had ever seen. In some ways it was a classic story about an immigrant community wrestling with issues of assimilation and cultural difference; the film's shaggy-dog plot exposed various political, linguistic and generational tensions among Chinese-Americans. But "Chan Is Missing" also recalled both the French New Wave and San Francisco's long tradition as a location for atmospheric mysteries and noir films. Along with Jim Jarmusch's "Stranger Than Paradise," Alex Cox's "Repo Man" and Spike Lee's "She's Gotta Have It," Wang's "Chan Is Missing" was a touchstone of the early-'80s independent-film explosion and announced the arrival of an intriguing new talent.

All four of those filmmakers, one could argue, have had erratic subsequent careers, and Wang's may be the most peripatetic of all. I was friendly with Wang in the late '80s in San Francisco and even worked with him briefly, writing publicity material for "Life Is Cheap ... But Toilet Paper Is Expensive," a confrontational picture shot in Hong Kong that I still, perhaps perversely, consider his best work.

Since then Wang has had a major Hollywood hit (the 1993 screen version of Amy Tan's "The Joy Luck Club"), directed an indie landmark (1995's "Smoke," written by Paul Auster) and labored through an up-and-down period in which his Hollywood movies ("Maid in Manhattan," "Because of Winn-Dixie") became increasingly generic and his smaller-scale projects ("Chinese Box," "The Center of the World") didn't attract much notice. While Wang has never wanted to be pigeonholed as exclusively an Asian-American filmmaker, it's difficult to resist the conclusion that he makes his best pictures when he's fairly close to his roots.

With his unconventional double bill of new low-budget films, "A Thousand Years of Good Prayers" and "The Princess of Nebraska," Wang is back on highly personal terrain. Himself a teenager when he moved from staid, conservative Hong Kong into the turmoil of 1960s California, Wang has always made movies about immigrants, outsiders, strangers in a strange land. In the award-winning short-story writer Yiyun Li, a more recent immigrant from mainland China, he has found a kindred spirit.

"A Thousand Years of Good Prayers," a Li story that she adapted for the screen, at first presents as a conventional intergenerational immigrant comedy: There's the Westernized daughter, Yilan (Faye Yu), living in an anonymous American suburb -- it's actually Spokane, Wash. -- her widowed and meddlesome dad, Mr. Shi (Henry O), on an open-ended visit from China, and the nameless Iranian widow (Vida Ghahremani), who becomes Mr. Shi's park-bench companion despite their lack of a shared language. But it's a subtler, lonelier and sadder comedy than that description suggests. Yilan and her father finally do make some efforts to confront the past and communicate with each other, but the distance between them is too vast to bridge with a little conversation. The same thing goes for Mr. Shi and his Farsi-speaking friend; sometimes a few moments with a stranger on a park bench is all we get.

While "A Thousand Years of Good Prayers" is being released theatrically by Magnolia Pictures and as video-on-demand by HDNet, Wang's more adventurous Li adaptation, "The Princess of Nebraska," will pioneer a heretofore untested method of feature-film distribution by premiering in mid-October on YouTube, absolutely free to viewers. I'll have more to say about that film and its experimental distribution platform in due course, but let's just say that for anybody who admires Wang's early work it's a must-see. It takes viewers on a vertiginous 24-hour journey with Sasha (Ling Li), a young Chinese woman who's pregnant from a one-night stand with a bisexual Beijing Opera performer, and who comes to San Francisco to seek an abortion and confront her lover's white American boyfriend (Brian Danforth).

Wang himself still lives in San Francisco, but also keeps an apartment in New York to conduct his business. (Like any dyed-in-the-wool San Franciscan, he dislikes Los Angeles and rarely goes there.) In July, "The Princess of Nebraska" was the opening-night film at this year's Asian American International Film Festival in New York, and he met me for breakfast at a cafe in Greenwich Village. (Listen to the interview here.)

Wayne, your previous film, "Last Holiday," had Queen Latifah and Gérard Depardieu in it ...

I know. What a great combination!

And now you've got these two much smaller films where you're back to Asian-American themes. Was this your strategy all along, to alternate bigger-budget movies in Hollywood and your own independent productions? Or is it just an accident?

It's always been kind of a strategy in my mind, but sometimes I get caught up in one or the other. For example, I got onto "Maid in Manhattan" after I did "Center of the World" because I couldn't get funding for anything after "Center of the World." So I did "Maid in Manhattan" and then I couldn't get off that treadmill. And finally, I read these two short stories by Yiyun Li and raised some money and did these two independent films, back to back.

"A Thousand Years of Good Prayers," which is going to be in theaters, or at least some theaters, is a quiet, subtle story. It reminds me of your early films, to some extent. It also has an immigration theme. Were those things that immediately appealed to you, the scale of the story and the subject matter?

That was the first thing. Creatively and aesthetically, I wanted to do something different from the big Hollywood films that basically are so dramatic and melodramatic and really force a pace on you. And everything is kind of unnatural. I wanted to do something that gives you more complexity and spends some more time with the characters. And taking a little more time with everything. Breathing a little more with the characters. I'm a big fan of [Japanese director Yasujiro] Ozu. In a way, it's trying to get back to that spirit.

And the short story had a lot of things I identified with. There's a middle-aged woman in the film who says, "I came to America. I learned a new language and a new culture," which is basically what I went through, too.

You were pretty young when you came to this country, right?

That's an interesting moment. So you were pretty acculturated as a Chinese person and then you were suddenly surrounded by this new thing.

I came to the Bay Area in the late '60s, early '70s. It was free drugs, free love, free everything. Everything was going crazy. Berkeley was basically burning up. I lived on a ranch, which was owned by some Quakers, and they were pretty radical. And I remember David Harris and Joan Baez, who were on the run at the time, having meetings there. It was quite an interesting time. It was really an eye-opener and really set a path for me.

It's hard for me to imagine the cultural difference between that and Hong Kong in the '60s.

My parents were relatively traditional, conservative businesspeople who escaped the communists in China and went to Hong Kong and basically were quite apolitical and very conservative. I was brought up in that kind of mind-set. So then to be thrown into Bob Dylan and the radical '60s was quite a change.

I remember there was one time -- you know, I was a foreign student, so my visa was sensitive anyway. I woke up one morning and I walked out of the house and I was surrounded by the FBI. But they were looking for some Black Panther. They weren't interested in me.

In terms of your career, I was trying to think of other people who have been doing some version of this -- you know, that thing people say, "One film for them, one film for me." The two examples I came up with were Michael Apted, who's had a whole career of making Hollywood films on one hand and then doing his amazing series of independent British documentaries, and also Neil Jordan, who has done Hollywood films and then gone back to Britain and Ireland to make more personal films. In terms of the bigger films that you do, do you look for something that resonates for you personally, or is it more about being a craftsman telling a story?

I think my first priority is being a craftsman who can tell a story. But at the same time, I'm always looking for something I can hang my hat on, so to speak. And if you look at them, they all do have a theme of some kind. If you look at "Anywhere But Here," "Because of Winn-Dixie" or even "Last Holiday," they're all about people who are outsiders trying to connect to a community. Even "Maid in Manhattan." I try to hook into that. Otherwise I would feel like I was just a pure craftsman, and I don't know if I can completely do that.

Is that double track continuing to work for you? Can you go on working in both venues?

It's tough. I think the studios are changing more and more. I think more dramatic, smaller, personal films are harder to come by. They don't make as many of those. It's all these big "Batman" and "Iron Man" movies now. Or teenage movies. So it's harder. But there's one or two a year that get made -- if a good script comes along with the right producer, then it's good for me to do it. Otherwise, it can be pretty frustrating.

"A Thousand Years of Good Prayers" is now playing at the Lincoln Plaza Cinemas in New York, and opens Sept. 26 in Los Angeles and San Francisco, Oct. 3 in St. Louis and Washington, Oct. 10 in Chicago, Oct. 17 in Boston and San Diego, Nov. 7 in Minneapolis, Nov. 21 in Philadelphia and Nov. 28 in Hartford, Conn., with more cities to be announced. "The Princess of Nebraska" will premiere Oct. 17 on YouTube.