The battle for votes in Pennsylvania's Clinton country

This year, the economy trumps social issues in blue-collar Scranton. That should mean advantage, Democrat. But what does it really mean when local voters say they don't "know" Obama? 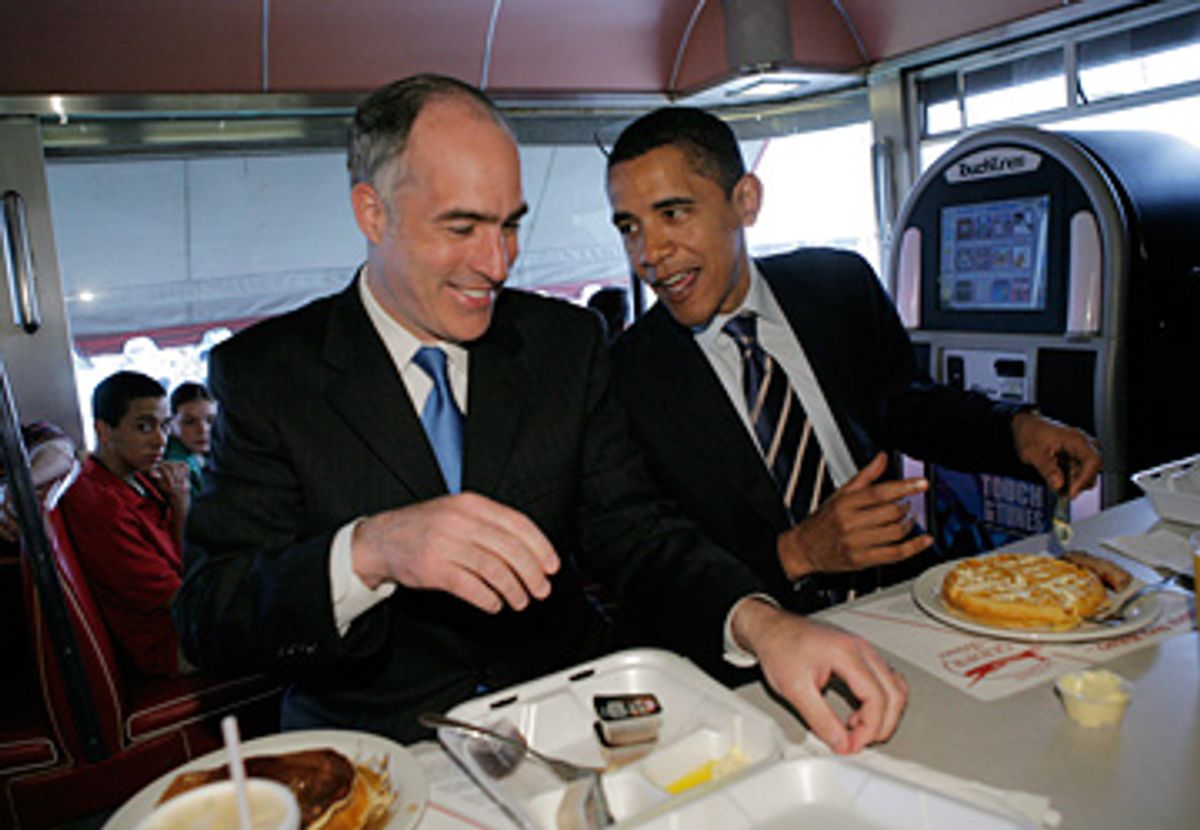 It was a balcony scene closer in spirit to "The Making of the President" than to "Romeo and Juliet." Trapped by wet paint on the second-floor balcony of his home in nearby Dunmore Saturday afternoon was Mark Murray, a state employee in his mid-40s, who is a registered Republican and a self-described "undecided voter." On the sidewalk shouting up at Murray was Jennifer Gerrity, a 29-year-old Scranton police officer who was in her off-duty civilian role as a volunteer canvasser for Barack Obama.

With paintbrush in hand, Murray had an easy excuse to send Gerrity off to the next address on her printout of persuadable voters. But he wanted to talk politics, even if it required raised voices to pull it off. Murray offered kind words for the Republican ticket: "One thing in John McCain's favor is that he breaks party lines and [Sarah] Palin has taken down a couple of Republicans in Alaska." But what appeared to be preventing Murray from painting himself into a partisan corner was economic insecurity, particularly American jobs going abroad. "The executives who make the decisions to outsource things do pretty well for themselves," he said with an edge to his voice. Gerrity, dressed in an un-police-like San Francisco T-shirt and canvassing for the first time, recalled an Obama TV commercial as she improvised, "Barack wants to end tax breaks for companies that ship jobs overseas."

What made this encounter perhaps emblematic of something larger was that while Murray stressed that as a Catholic he is strongly opposed to abortion (as is Gerrity), he made clear that this was not a voting issue for him this year -- even though McCain agrees with him and Obama does not. As Sen. Bob Casey, a Scranton native who is among the nation's most prominent antiabortion Democrats, said in an interview, "When the economy is in difficult straits, as it is now, it does push out other factors."

The decline of social issues, even in culturally conservative areas like Scranton, was also reflected in comments by Jon Seaton, the McCain coordinator for Pennsylvania and Ohio. "This [abortion] is not the overriding issue," Seaton said Saturday. "We hear at town meetings that people are much more concerned about economic issues and the cost of a gallon of gas. Yes, there is a clear difference between McCain and Obama on the life issue. But it is not the overriding concern."

Murray, like other voters I interviewed in Scranton, remains surprisingly hazy about Obama: "I haven't heard much about him." But even if Murray cannot get a handle on the Democratic nominee, he has absorbed some of the candidate's underlying message. "There definitely have to be some changes made in Washington," Murray said, sounding like the man in the street in an Obama TV commercial. Despite his GOP registration, Murray may make that leap of faith. His last words, delivered from on high to the Obama canvasser, were: "It may sound like I'm leaning more toward McCain. But that isn't the case."

Lackawanna County (Scranton) and neighboring Luzerne County (Wilkes-Barre) are traditionally blue-collar Democratic areas where the party's margin has narrowed in recent presidential elections. (Bill Clinton's margin in the two counties was 36,000 votes in 1996; it was 32,000 votes for Al Gore in 2000; and it slipped to less than 20,000 for John Kerry last time out.) Small wonder that Monday morning John McCain will be participating in an Irish-American forum and holding a town meeting here in Joe Biden's birthplace. As Terry Madonna, a pollster and political historian at Franklin and Marshall College, put it, "If the Republicans take 3 points from the Democrats in northeastern Pennsylvania and 3 points in the southwest, it gets very, very close here in Pennsylvania."

A weekend in Scranton (more appealing than its inclusion on Forbes magazine's recent list of "America's Fastest-Dying Cities" might suggest) provides anecdotal evidence that voters have yet to fully grasp the implications of the incredible shrinking financial sector. At Chick's Diner in Scranton Sunday morning, a 22-year-old factory worker named Tim G. (he would not reveal his full last name) who will be casting his first vote for McCain in November, sniffed, "Where's the recession we're supposed to be in. What recession? And if there is a recession, it's probably because of the Democratic House."

Casey mused aloud in our interview, "The magnitude of what happened on Wall Street is hard for anyone to absorb. Maybe it hasn't fully sunk in because the image of real economic calamity is so based on the 1920s and the Depression. Maybe things will change as people begin to look at what has happened to their retirement accounts over the next few weeks."

One of the trickiest things about this campaign is deciphering precisely what voters mean when they say they do not know enough about Obama. In Madonna's view, "It means that they're confused about all the things that Hillary Clinton said about him during the seven weeks she was campaigning here in the primary." He cited everything from charges of inexperience to the media controversy over purported "elitism." Clinton, whose father's roots were in Scranton, won Lackawanna and Luzerne Counties by a 3-to-1 margin. Kevin Donohue, a young Obama canvasser who grew up in Biden's old neighborhood of Green Ridge, talked about the "Hillary holdouts" -- both men and women -- whom he encounters while knocking on doors in Scranton. "I think it's a personal affinity for Hillary," Donohue said. "They identify with her more. They see Obama as a little more of a fast talker."

Casey, who strongly supported Obama in the April Democratic primary, wonders if things like Hillary nostalgia and uncertainty about Obama may represent something more insidious. "There are parts of northeastern Pennsylvania where race is a barrier," he said, bringing up the topic unbidden. "We have to work around it and confront it. I wonder if with some voters, the background is race and they're putting up other issues."

Interviews in Scranton also provided a whiff that Palin may be a pallid vice-presidential choice for some undecided voters. Sitting at the counter at Chick's Sunday morning, after his breakfast of sausage and egg on a hard roll, 34-year-old Micah Friedman, who works in benefit analysis for an insurance company, described himself as a fence-sitting registered Democrat. He brooded that partly because of inexperience Obama "will be a lightning rod with Congress." McCain, in contrast, he said, "does work in bipartisan ways. He works with Joe Lieberman." But Friedman draws the line at Palin. "There is statistically a 1-in-3 chance that McCain will pass away in office, given his age and his health history," the insurance analyst said. "I'm not sold on Sarah Palin's experience."

Palin will not be accompanying McCain to Scranton Monday morning. But, at least this weekend, the Republicans were on the short end of the enthusiasm gap. The Obama campaign -- as I witnessed from the mob scene in front of its downtown Scranton headquarters -- sent out more than 250 canvassers (about half from neighboring states like New York) Saturday afternoon. While the McCain campaign did move its phone bank to nearby Wilkes-Barre Saturday because of the candidate's impending visit, the only volunteer activity (aside from ticket distribution) discernible at the local headquarters was six high-school students hand-painting blue-and-gold signs for Monday's town meeting: "Country First" and "Scranton Loves McCain."

The 72-year-old Arizona senator may have the old-fashioned political persona to run competitively in the Scranton-Wilkes-Barre area, since even Bob Casey concedes, "John McCain still benefits from some of the afterglow from 2000 when he opposed Bush." And for now, the Wall Street whipsaw still remains more theoretical than real here in Scranton. But if the financial factor hits with a vengeance before Election Day, lingering uncertainty about Obama may be replaced by grave doubts about eight years of Republican stewardship of the economy.