Barack Obama won't win Arizona, but Democrats down the ballot are poised for a big year on John McCain's home turf. 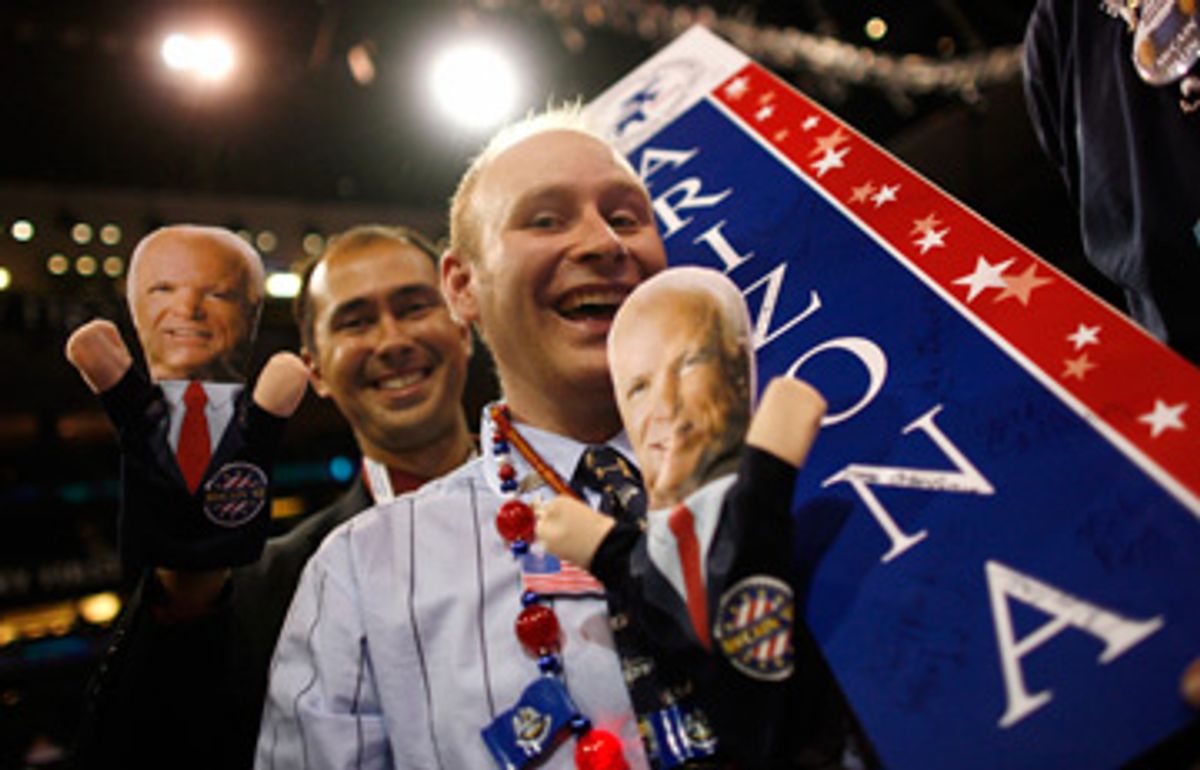 This should be a tough year to be a Democrat in Arizona. After all, the state's senior Republican, John McCain, is on the top of the national ticket. For the first time in three presidential elections, Arizona won't be a battleground -- you'd think the GOP would be nicely set up to win races up and down the ballot.

But try telling that to the nearly 1,000 people who turned out for a rally a few weeks ago to open Barack Obama's state headquarters downtown. (Or, for that matter, the 400 people who showed up a day early because a blog post got the date wrong.) Despite McCain, Democrats in Arizona are very much looking forward to the elections. Come November, McCain will almost certainly win his home state -- but he may find he doesn't bring a lot of Republicans to victory along with him. Instead, Democrats look likely to pick up a House seat, hold on to two others they won in 2006, and at least challenge -- if not overturn -- Republican control of the state Legislature.

Like other purple Southwestern states, Arizona has seen an influx of newcomers and rapid growth in the number of Latino voters, two trends that could help tilt it farther away from its conservative past. Which is why Don Bivens, the chairman of the Arizona Democratic Party, is feeling pretty good these days. "We're still going full steam ahead," he said last week. His only regret? "I wish I had some of the resources they're giving to New Mexico" for the presidential race. The presidential campaign is basically passing Arizona by, but even so, McCain was only up by 10 points in recent public polls; private polls for campaigns have Obama even closer in some congressional districts around the state. (Bivens says Obama's strategists in Chicago tell him they'll consider buying ads and spending some money in Arizona if it's still close after the debates.)

Losing on his own turf would be embarrassing for McCain (putting him in a small club with Al Gore and George McGovern, the only nominees in the past 50 years who couldn't carry their own states). The last candidate from Arizona, Barry Goldwater, won his home state (albeit by less than a percentage point) even while losing in a national landslide in 1964. McCain won't be at risk of losing Arizona unless Obama somehow manages to put together an LBJ-size wave of his own in the next 45 days. What has Arizona Democrats excited, though, is the fact that even without a competitive race at the top of the ticket, they're registering voters and raising money much faster than the state's Republicans. Since the 2006 elections, nearly 76,000 new Democrats have signed up to vote in Arizona, compared to about 26,000 more Republicans. The shift has shaved a few points off of the GOP's long-standing edge in party registration, and Democrats now make up about 34 percent of the electorate, compared with 38 percent for Republicans and nearly 27 percent independent. Financially, the state Democratic Party has raised more than seven times as much as the state Republican Party this cycle, finishing the summer with $325,000 in the bank to the GOP's $58,000. "We consistently this year have been seeing unprecedented levels of support," said Maria Weeg, the state Democratic Party's executive director.

Randy Pullen, the state's conservative GOP chairman (who hasn't always been a McCain fan), claims excitement about McCain will help his side this fall. The problem for down-ballot Republicans is that while McCain is popular in Arizona, he doesn't seem likely to draw out straight-ticket Republican voters who weren't already going to turn out. A big bloc in the state's deeply conservative Republican base has always clashed with McCain; his support for comprehensive immigration reform, which he's been trying to distance himself from for the last year, didn't help him with hardcore GOP activists back home who tend to see securing the border as part of an existential struggle for the state's soul. McCain only won 47 percent of the vote in the Feb. 5 Republican primary, with Mitt Romney taking 35 percent -- and this was in a primary that actually mattered, unlike later contests where McCain's total was held down by protest votes. Arizona voters have no problem splitting their tickets -- in 2006, Democrat Janet Napolitano was reelected as governor, Republican Jon Kyl was reelected to the Senate, and Democrats won the state's two competitive House races.

"I don't expect much coattails" for McCain, said pollster Bruce Merrill, a professor emeritus at the Arizona State University's Cronkite School of Journalism who runs a monthly survey for the school and a local TV station. "The presidential election is a personality contest rather than party-based. The issues at the state and local level are heavily in favor of Democrats."

With the economy in the tank, even conservative parts of the state could be blue this fall. Freshman Democratic Rep. Harry Mitchell, who worked closely with McCain when Mitchell was mayor of Tempe and McCain represented the area in the House and Senate, may escape serious danger even though Republicans vastly outnumber Democrats in his district; the GOP nominated a relatively unknown conservative, David Schweikert, to run against him after a divisive primary. National Republicans seem to be staying out of the way of another first-term Democrat, Gabrielle Giffords, in southern Arizona, though she was initially one of their major targets.

In the state's sprawling 1st Congressional District, which Democrats have only controlled for two years out of the last 50, Democratic former state Rep. Ann Kirkpatrick is favored to win a House seat left open by the retirement (amid a corruption scandal) of the Republican incumbent, Rick Renzi. A native of the rural district, Kirkpatrick is playing up her ties to the area and her support for small-town Arizona in her race against Republican Sydney Hay, a rabidly conservative lobbyist for the mining industry who has worked for losing presidential campaigns for Alan Keyes, Pat Robertson and Duncan Hunter.

Hay wasn't the first (or even second) choice of most national Republicans for the campaign, but they couldn't recruit any bigger names to get in, and the national party has already basically pulled out of the district. During a debate at the Yavapai County Fair in Prescott Valley, Ariz., on Saturday, you would have barely known from listening to Hay or Kirkpatrick (and an independent candidate, Brent Maupin) that the presidential race was even going on. Yavapai County is ranching country, and conservative enough that the local Democrats didn't even bother setting up a booth at the fair (or if they did, it was hidden away somewhere no one could find it). But Hay brought up McCain only in passing, and not by name; she emphasized her "pro-family" conservative agenda and stuck up for opening Social Security to private accounts. Kirkpatrick hammered away at her message that the war in Iraq is costing too much money and the government isn't looking out for the little guy. "I'm angry about the situation, and I'm putting my anger into action," she said. (Like both McCain and Obama these days, Kirkpatrick says she wants to change Washington.)

Even staunch McCain supporters at the fair said that wouldn't necessarily translate into support for the GOP in other races. "We like to vote for who best represents what we feel is necessary" for the country, said Becky Dill, a registered Republican from Chino Valley, Ariz., with a McCain-Palin button pinned to her purse. She was open to voting for Democrats in local races (including the House contest), which she said had nothing to do with the presidential race. Meanwhile, Arizonans who don't like McCain seem even more motivated to get involved in politics this fall in order to show him up. "For many years, I had a lot of admiration and respect for John McCain," said Craig Mathews, a retired postal worker from Chino Valley. "I saw a real change in him before the 2004 election, when he turned around and endorsed George Bush ... He's willing to do anything to get elected."

The area's Republican state Rep. Lucy Mason, working the GOP booth at the county fair, told me she wouldn't be surprised at all if Kirkpatrick -- whom she worked with frequently in the Legislature on rural issues -- won the House seat. She also sounded, ruefully, like she thought Democrats might take over the statehouse, in part because Republicans couldn't wrangle up enough good candidates. "We lost nine seats just from term limits this last time, and it's very, very difficult to find people to run," she said. Republicans nominated conservative candidates in some legislative districts near Phoenix where the voters tend to be more moderate, and could suffer as a result. Democrats are two seats away from parity in the 30-seat Senate, three seats away in the 60-seat House. In 2006, they picked up six seats in the House and one in the Senate.

What Arizona may become this fall, even if McCain wins its 10 electoral votes easily, is ammunition for Democrats who believe the party needs to push hard on the so-called 50-state strategy. If it tips blue in the down-ballot races even with a native son at the top of the Republican ticket, it's hard to argue with the idea that it's worth looking for every vote you can find. Of course, it could also go down as the great "if only" of the 2008 election. As Obama scrambles to find 270 electoral votes, it's hard not to wonder how much easier his job might have been if McCain had started his political career somewhere else.