McCain is now unlikely to show up for the first scheduled showdown with Obama. Master stroke or campaign in meltdown? 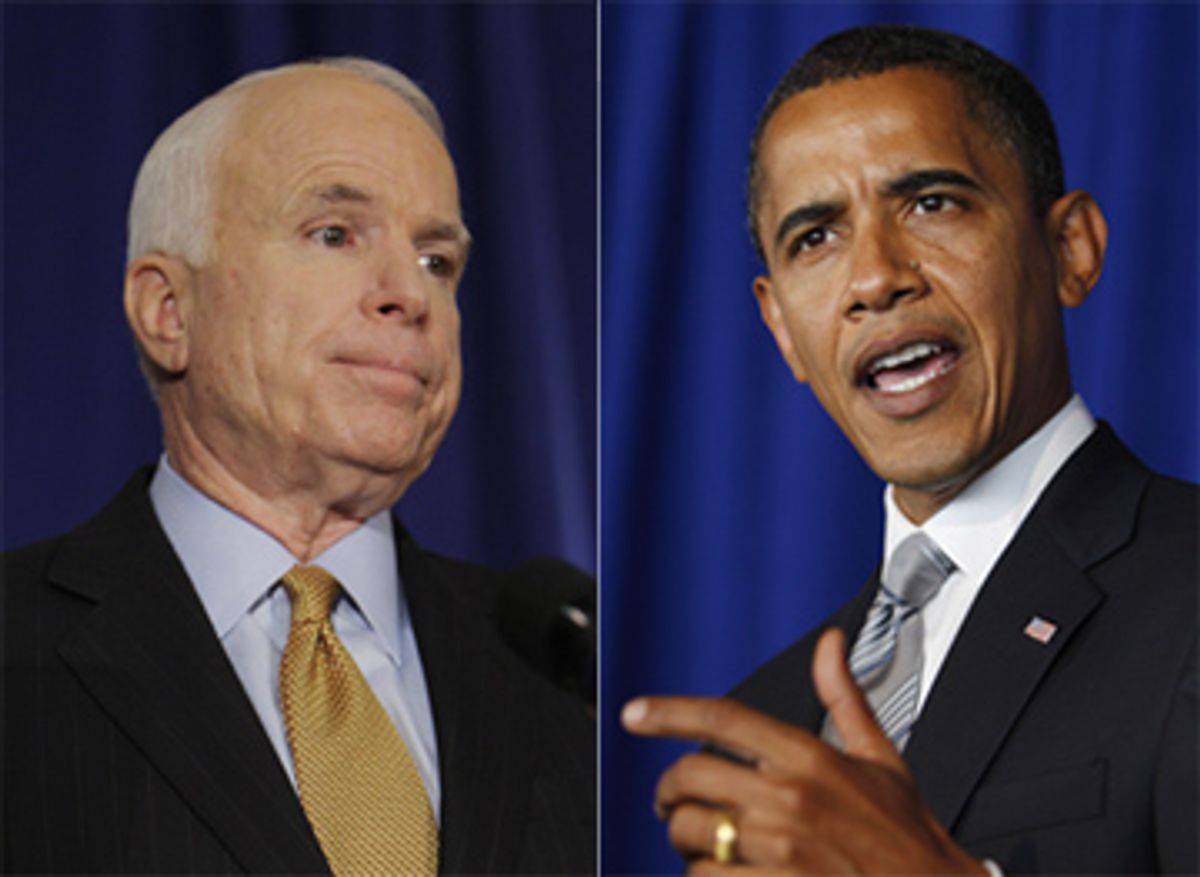 John McCain is once again proving himself to be the fastest gun in the West -- the presidential candidate most likely to shoot up the saloon on a Friday night. Or, in this case, the first presidential debate slated for Friday night, in Oxford, Miss. With a flair for the dramatic, McCain suddenly announced Wednesday afternoon that he was suspending his campaign (attack ads included) because of the financial crisis -- and called for postponing the Mississippi Mixer "until this crisis is resolved."

Less than two hours later, Barack Obama delivered his answer: on to Oxford. Speaking to reporters at an impromptu Florida press conference, Obama said that if all senators needed to be in Washington for the interim, "We've both got big planes. We've painted our slogans on the sides of them. They can get us from Washington, D.C., to Mississippi fairly quickly." The Commission on Presidential Debates joined in the fray by promptly issuing a statement declaring that it "was moving forward with its plan for the first presidential debate."

Never before in the tangled history of these high-stakes face-offs has a candidate tried to scuttle a debate this close to deadline. As Sidney Kraus, the leading historian of presidential debates and an emeritus professor at Cleveland State University, put it, "It is not unusual for the candidates to disagree over the place or the time, even after they've agreed to be there. But we've never had anything remotely like this."

McCain wrapped his decision to forgo the odyssey to Oxford in patriotism-above-party pieties: "We must meet as Americans, not as Democrats or Republicans, and we must meet until this crisis is resolved." But (shocking revelation ahead) there were hints that political calculation may have played a role in McCain's decision. Wednesday morning the McCain campaign hastily arranged a conference call for reporters with pollster Bill McInturff to dispute a Washington Post-ABC News poll that gave Obama a jaw-dropping 53-to-44 percent national lead. While the poll may indeed have been an outlier (the one in every 20 surveys that is wrong for no methodological reason), other national and state polls released Wednesday signaled that the Wall Street whipsaw was moving the race in Obama's direction.

But whatever McCain's underlying motivations, both campaigns are now locked in a bizarre game of chicken. If McCain actually boycotts the Oxford debate, Obama may score a public-relations coup while his Republican rival looks weak and evasive. Or the Democratic nominee may appear too political while McCain puts on his mantle as statesman. Republican strategist Rich Galen, who advised Fred Thompson in the primaries, said, "It's a brilliant stroke by McCain. You will have an empty chair debate in Oxford without McCain. And an empty chair at the White House economic negotiations without Obama." Of course, George W. Bush, an early-to-bed president, is unlikely to be meeting anything but his pillow at the White House during debate time Friday night.

The three presidential debates and the single veep one have been carefully scheduled around Jewish holidays, Monday night football and other major religious occasions. If, for example, the negotiations over the fiscal-market rescue plan continue through the weekend, the first available date to reschedule would be the night of Wednesday, Oct. 1, because Rosh Hashanah begins Monday night. But Thursday night, the 2nd, Joe Biden and Sarah Palin are scheduled to have their own evening in the spotlight, a contest that once threatened to overshadow McCain vs. Obama. Further complicating the calendar is the bipartisan belief that late October debates are too risky -- a truth brought home by Jimmy Carter's political collapse in 1980 after an Oct. 28 debate with Ronald Reagan.

Ed Fouhy, who was executive producer for the 1988 and 1992 debates for the commission, estimates that it logistically would take about 48 hours to arrange a bare-bones debate at a new site, such as a television studio (where the 1960 Kennedy-Nixon debates took place) or a college campus in Washington. Fouhy joked, "The people of Oxford, Miss., will probably never forgive John McCain." But, in truth, the facilities in Oxford would presumably be available on another night.

Barring an agreement in Washington beforehand, it is hard to imagine that Friday's debate will actually happen, since McCain now would look weak if he suddenly gave way in response to public pressure to relent. Also, any disruption of his debate-prep schedule would presumably undermine McCain's performance. But then there is the Palin factor. At a time when the Republican campaign only puts Palin forward in tightly scripted settings, delaying her rendezvous with Biden would inevitably give rise to speculation that the first-term Alaska governor had yet to master her briefing books.

For all the bitter undertones of TV ads on both sides, Campaign 2008 up to now had been free of those ridiculous protracted debates over whether and how to hold debates. The negotiations between the McCain and Obama camps quickly led to a 31-page agreement on debate protocols. But nothing in those 31 pages explains what to do if only one candidate actually shows up Friday night in Oxford.