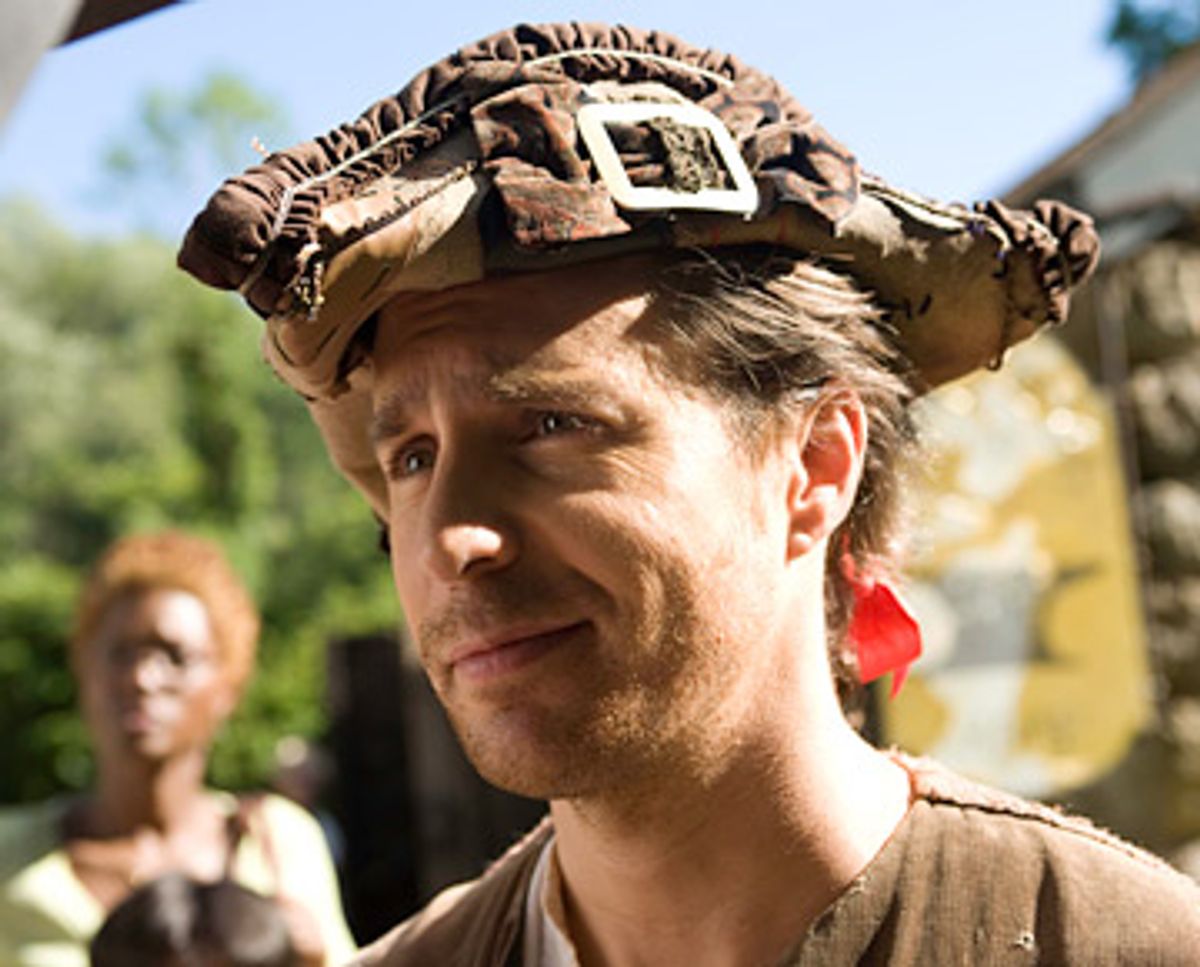 Maybe the secret to adapting Chuck Palahniuk's novels into movies is not to take them so damn seriously. If David Fincher's "Fight Club" became a problematic monument in American film history by outdoing its source material in paranoid portentousness -- and by overwhelming it with cinematic technique -- then actor-turned-director Clark Gregg's adaptation of Palahniuk's "Choke" (which I covered briefly from Sundance last January) takes an entirely different approach. Pretty much dumping any effort at high-minded social satire, Gregg's "Choke" is a fantastical sex farce, and a highly amusing one at that, without being the least bit momentous or memorable.

Speaking as a reader who's barely able to tolerate Palahniuk's prose even at the Barnes & Noble page-browsing level, I think this is a terrific idea; the writer's loyal fans may feel differently. One thing all parties can probably agree about: As Victor Mancini, the thoroughly unredeemed sex addict and con artist who is the roguish hero of "Choke," Gregg has the perfect leading man in Sam Rockwell. There's no American actor who does queasily-weaselly-lovable the way Rockwell does, and making this beyond-implausible script work demands a careful balancing act between Victor's odious behavior and his evident charm.

Victor works in a 17th century historical-recreation theme park that's quite a bit like Colonial Williamsburg, where he spends most of his time boffing his female co-workers and engaging in silly gadzooks-varlet period banter with his jealous male rivals. Then there's the hospital where Victor's aging and apparently deranged mother lives (Anjelica Huston, I am sorry to say, is consigned to this role), and he has a significant track record with the female staff there too. Then there's the sex-addict support group headed by Joel Grey (in a hilarious cameo) and a medical researcher (Kelly Macdonald) who believes that Victor may carry the same genetic material as Jesus Christ -- and who, in her prim, buttoned-down hotness, may hold the cure to his sexual addiction.

It's all par-for-the-course Palahniuk material, but played as enjoyable nonsense rather than trenchant social critique. The title derives from Victor's pattern of pretending to choke in restaurants so strangers can "save" him with the Heimlich maneuver, after which he scams money out of them in various unpleasant, parasitical ways. But these episodes play almost no role in the film, which is a predictable Don Juan yarn about a too-smooth loverboy who will, of course, eventually meet his comeuppance and find the woman who can set him straight. Acting is uniformly good (in addition to those mentioned, Brad William Henke plays Victor's lovable, chunky sidekick, a Palahniuk staple) and the filmmaking is straightforward, in a bright, bold, off-Hollywood style. One could certainly point out the casual misogyny of "Choke" or its wildly unconvincing portrayal of heterosexual promiscuity, but that would be to mistake the film as even a vague gesture in the direction of realism. (Now open in major cities, with wider release to follow.)

Daniel O'Connor and Neil Ortenberg's documentary "Obscene" takes quite a while to get going. If you're not already convinced that longtime Grove Press publisher Barney Rosset is a worthwhile subject, you might wonder whether all these fragments of 1930s home movie and 1980s cable talk show and aging-bohemian interviews will ever add up to anything. But Rosset's tale of triumph and tragedy is definitely worth your attention -- he's the guy who broke the back of American censorship by publishing unexpurgated editions of banned books, including D.H. Lawrence's "Lady Chatterley's Lover," Henry Miller's "Tropic of Cancer" and William Burroughs' "Naked Lunch."

When Grove was riding high, along with Rosset's literary magazine Evergreen Review, he was unmistakably a premier reshaper of American culture. He published "Waiting for Godot" and "Story of O" and "The Autobiography of Malcolm X" and countless other influential books, all in those ultra-cool, Abstract Expressionist-flavored paperback editions. His office was occupied by a feminist group in the early '70s, reputedly angry about his ardent interest in republishing Victorian pornography -- Rosset believes to this day that the group was an FBI front, and it's not as ridiculous a claim as it sounds -- and firebombed after he published an excerpt from Che Guevara's diaries. If there's anyone the right wing should demonize for the destruction of traditional American values and mores, it's Barney Rosset.

Somehow, although Rosset at one point ran the hottest publishing house in New York, made a mint off the softcore Swedish film "I Am Curious (Yellow)" and owned more than 200 acres of undeveloped land in the Hamptons (estimated current value: $100 million), he managed to lose the company, all the money and all the property. A puckish, cheerful man who seems reasonably healthy in his mid-80s, despite the decades of all-night boozing and womanizing, Rosset now lives alone in a modest Manhattan walk-up apartment. With lots of books. It's hard to know exactly what lessons to draw from Rosset's convoluted story, or even to know for sure whether he should be seen as an epoch-defining cultural hero or just a guy who was in the right place at the right time. He shouldn't die forgotten, let's say that much, and O'Connor and Ortenberg's fascinating film does its part. (Now playing at Cinema Village in New York, with more venues to follow.)

Into the ever-murkier gulf between documentary and fiction rides Olaf de Fleur Johanneson's film "The Amazing Truth About Queen Raquela," which churns a lot of familiar ingredients into a strange, bittersweet and distinctive slurry. There's already a movie about the difficulties of Filipina transgender women (aka "ladyboys," in local parlance) who work as immigrant labor in Israel -- but ladyboys in the fish canneries of Reykjavik, Iceland? No, we haven't seen that one yet.

Johanneson is himself an Icelandic filmmaker who met his star, Raquela Rios (birth name Earvin), in the booming transgender scene of Cebu City, Philippines, and determined to make a movie about her. A reflective dreamer who can, appropriately enough, pass both as a beautiful young woman and a slight but unaffected young man, Raquela becomes the protagonist of a shaggy-dog doc-turned-drama, going from Cebu City streetwalker to Internet porn star to cannery worker in Reykjavik. Along the way she strikes up an instant-message flirtation with her boss, a taciturn New York Web entrepreneur named Michael (played by co-writer Stefan Schaefer), who decides to fulfill Raquela's lifelong dream of seeing Paris.

"Queen Raquela" is a crackpot hybrid of a film, quite likable on the whole, and Raquela is surely a born star. And if the movie gave her a chance to go to Paris, that's great. (I'm not so sure she dreamed of the treeless landscape and freezing fogs of Iceland, but I imagine it was an interesting change of pace.) Still, this might have been better as a regular documentary without the faintly postmodern narrative trappings; Raquela and her two ladyboy friends hanging out in Cebu City, checking out cute guys and exchanging bitchy repartee in mingled Tagalog and English, is superior to any of the fictional material. (Now playing in New York and Los Angeles, with more cities to follow.)

Beyond The Multiplex Chuck Palahniuk Movies