Leading Republicans say that, short of total gridlock on the economic bailout, a McCain no-show on Friday would be "a huge political mistake." 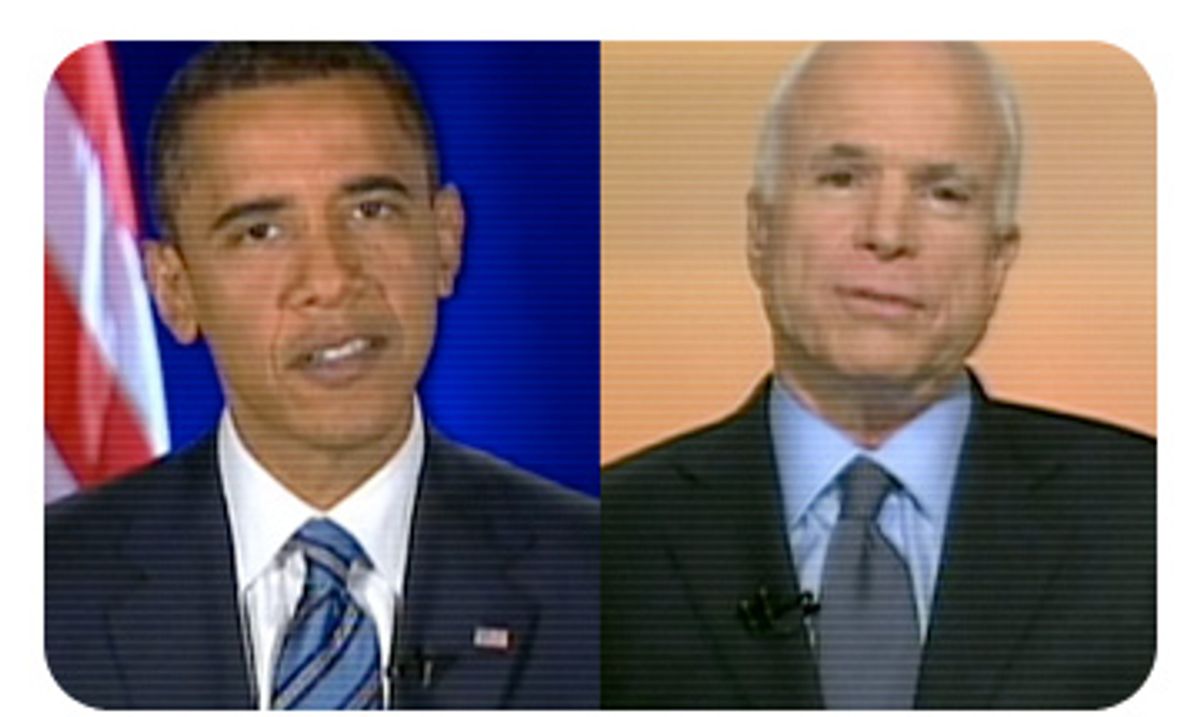 As John McCain and Barack Obama met with George W. Bush at the White House Thursday afternoon on the economic rescue plan, the Republican co-chairman of the Commission on Presidential Debates exuded optimism that the two candidates would debate Friday night in Mississippi as planned. Frank Fahrenkopf said in a telephone interview, "If they all come out and say there is an agreement, it would be very hard for John McCain not to go to Oxford."

Instead the initial impression after the White House meeting was that congressional gridlock trumped any effort to save greed-locked Wall Street. Even a glimmer of a deal on a bailout would probably bail McCain out of a tight spot. The Arizona senator threw the political world into a tizzy Wednesday when he suddenly announced that he believed it would be inappropriate to debate with Obama until the financial crisis was resolved. But 24 hours later, this hard-line position was facing GOP ridicule, at least in not-for-attribution conversations.

"Unless the negotiators are sitting in the Oval Office with Harry Reid and Nancy Pelosi at 8:59 p.m. on Friday night, it would be a huge political mistake for McCain not to debate," said a prominent Republican with longtime ties to McCain. It would be difficult politically to explain a no-show McCain if the lights were dim at the White House and Congress, if still in session, is just continuing to go through the motions.

A common misconception is that the 90-minute debate would feature Obama, moderator Jim Lehrer and an empty chair if McCain clung to his resolve to stay in Washington. But such a scene -- frequently invoked by talk-radio hosts and bloggers -- is about the only thing guaranteed not to happen on Friday night. "The law requires that there must be two candidates for a debate," said Fahrenkopf, a former GOP national chairman, who helped establish the bipartisan debate commission in 1986. "If we did anything else, we would be making an in-kind contribution to the Obama campaign."

Amid the market mayhem and economic anxiety, it had seemed odd that the first debate -- at the insistence of both candidates -- would revolve around foreign policy and national security. But assuming that the Friday night fight in Oxford actually comes off, the candidates will not have to go into contortions to turn every Iraq question into a Lehman Brothers answer.

"Long ago it was decided that this would be a debate on global affairs, and I can't think of a better opportunity to talk about a global financial crisis," Robert Gibbs, a senior advisor to Obama, said at a breakfast with reporters Thursday morning. Gibbs went on to reveal -- and Fahrenkopf later confirmed -- that the debate producers had informed both campaigns that there would indeed be questions about the financial meltdown.

Even though McCain has gambled that the voting public's clamor for debates can be delayed at least through the weekend, Obama has the most to gain or lose when the candidates finally stand behind their dueling lecterns. As a freshman senator, who was in the Illinois Legislature just four years ago, Obama must in the first 30 minutes or so of the debate establish himself as a credible 44th president. During the first presidential debate 48 years ago, this was the major hurdle that John Kennedy surmounted, putting to rest his image as a callow, playboy senator.

In the immediate aftermath, debates are rated by their gotcha moments and zinger one-liners. But what may linger in the minds of the 20 percent or so of the electorate who are still up for grabs are deeper perceptions about the candidates. Does Obama, for instance, come across as strong enough to survive GOP attacks claiming that he (like most Democrats) is weak on national security? McCain's burden is apt to be a certain president named Bush. Can the hawkish Arizona senator talk about Iraq or Iran without scaring persuadable voters that this is a movie they have already seen -- an administration that would be at war without end, amen?

But even if the debate rehearsals have been curtailed by the bailout bargaining in Washington, both Obama and McCain have a pretty good idea what will be coming their way on Friday night -- or whenever they finally face off. As Gibbs said candidly at the Thursday breakfast sponsored by the Christian Science Monitor, "I think everyone has a pretty good sense of what the topics will be. We've been through a number of these debates and obviously a lot of what I think will be asked Friday night is what you read about in the papers. I don't think there are going to be a lot of surprises."

Of course, those words were uttered before the congressional negotiations started to resemble chaos theory. So even as debate preparations go forward in Oxford, the biggest surprise Friday night may be if John McCain actually shows up.