Can the Chicago Cubs lose for winning?

For a century, the Cubs have based their identity on disappointment and defeat. So what happens if they actually win it all this year? 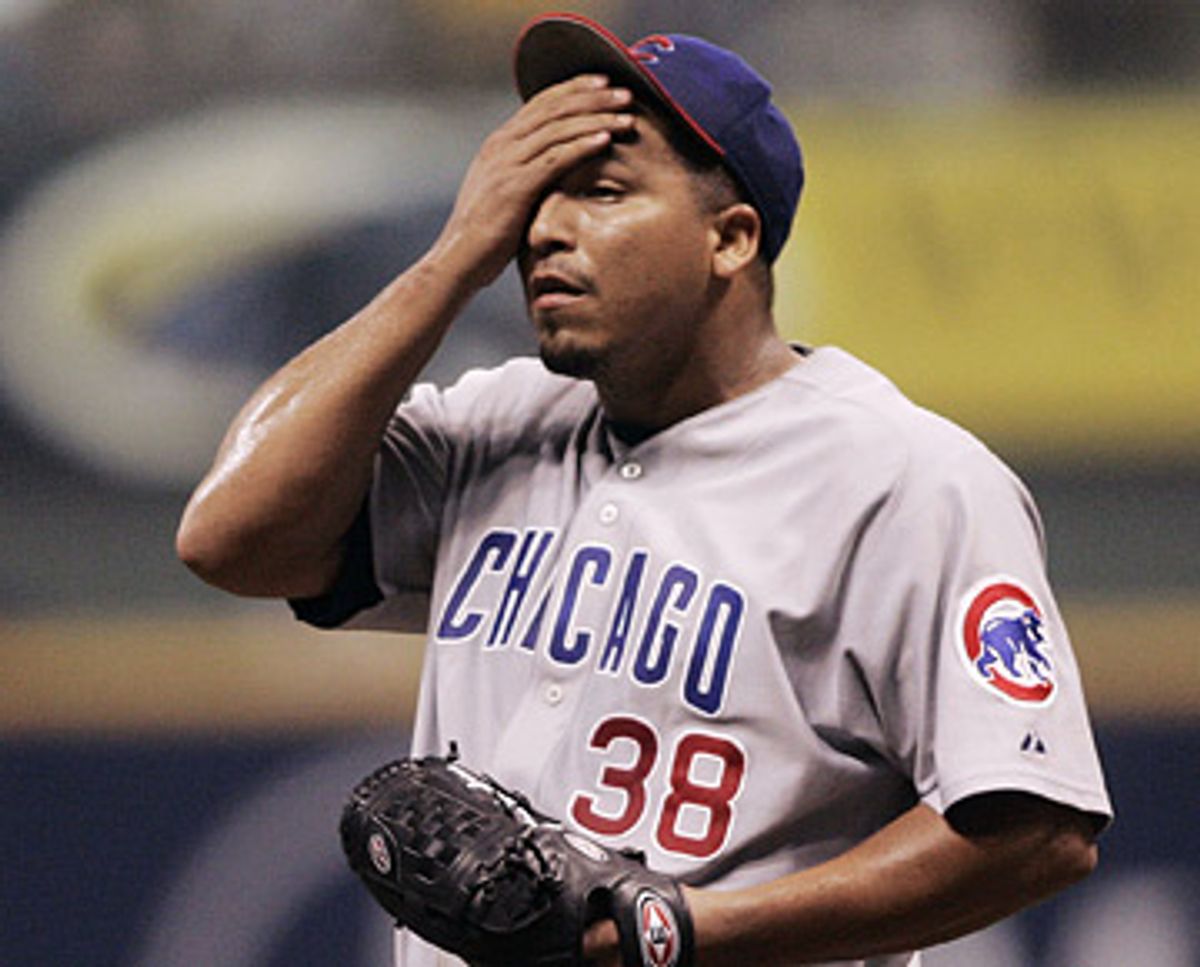 Last winter, I was driving past Wrigley Field when I saw a group of baseball fans huddled outside the ticket window. They were bundled in Cubs-blue parkas, buying admission to what they no doubt expected would be another season of errors, blown saves and dashed pennant hopes. I rolled down my window to shout encouragement.

I know it's rude to talk about winning in front of Cubs fans, but I meant it in the nicest way. Now I'm wondering whether a World Series title would be the biggest curse of all for a team that's built its identity on losing.

On Sheffield Avenue, across the street from Wrigley Field, there's a counter marking the years since the Cubs last won the World Series. This season, it hit triple digits. That's right, it's been 100 years since since that 1908 championship season when the Cubs inspired the newspaper doggerel "Tinker to Evers to Chance," and wore vintage uniforms, like the ballplayer in Abbott and Costello's "Who's on First" routine. It's the longest losing streak in sports history. You'd have to visit nearby Graceland Cemetery to find someone who saw the Cubs beat the Tigers in 1908.

Only a century later, it looks as though the Cubs may win again. They're going into the playoffs on Wednesday with the National League's best record. Carlos Zambrano, their $18 million pitcher, just threw the team's first no-hitter in decades. There's more Cubbie blue than ever on the streets of Chicago. Fans are toting signs that blare, "It's Gonna Happen!" Evanston native and Pearl Jam frontman Eddie Vedder wrote a song, plaintively urging the team to go "All the Way."

A Cubs World Series victory would set off the biggest beer blast since Prohibition was lifted. But it could end up spoiling all the fun at Wrigley Field.

"You go to Wrigley Field, you have a beer, beautiful people up there," Illinois senator and White Sox fan Barack Obama told ESPN this summer. "People aren't watching the game. It's not serious. White Sox, that's baseball. South Side."

Of course it's not serious. That's the appeal. You don't need good baseball to have a good time at Wrigley Field. You can have a good time just hanging out in the upper deck in a cramped seat under netting spread out to catch stalactites of crumbling concrete and looking at Lake Michigan through gaps in the apartment houses. You can have a good time just sitting in the bleachers and hearing Ronnie Woo-Woo, a famous janitor-turned-unofficial-cheerleader, root on the team with his falsetto cry of, "Cubs! Woo! Cubs! Woo! Cubs! Woo!" In between innings, you can turn around to check the out-of-town games, the inning-by-inning tally propped into slots on the hand-operated scoreboard. The scoreboard only has room for 24 teams. Baseball has moved on. Wrigley Field hasn't.

The Cubs' tradition of losing has insulated their fans from the highs and lows that followers of real sports teams go through. Cubs fans don't just tolerate that "L" pennant slithering up the flagpole above the scoreboard after a loss: They revel in it.

In 2003, the year the Cubs came within five outs of winning the pennant, a father led his son away from Wrigley Field after the team lost Game 7 of the National League Championship Series to the Florida Marlins.

"Well," he said, according to the Chicago Tribune, "now you know what it means to be a Cubs fan."

During that playoff, Cubs fans got what they'd signed up for. Something better, in fact: a scapegoat, Steve Bartman, to put in the pantheon of Cubs curses alongside the real-life goat whose 1945 ejection from Wrigley supposedly hexed the team.

Look at what winning that playoff did for the Florida Marlins. Since joining the league in 1993, they've spoiled their fans with two World Series titles. Earlier this month, with the team out of the pennant race, only 400 people showed up for a game at Dolphin Stadium. In the mid-1960s, the New York Yankees suddenly started losing after decades of dominance. Fans boycotted the stadium. The Yanks got the message. Since then, they've won the World Series six times.

For years, Cubs fans have moaned that the team's owner, the Tribune Co., won't spend money to win, because Wrigley will sell out even if the team goes 0-162. Usually, the fans who make this complaint are sitting in expensive box seats, drinking $6 cups of Old Style. If that's the case, then whose fault is that, Cubs fans?

The year after the Cubs blew the pennant, I went to a game that was canceled by a sudden storm. When I asked for a rain check, the ticket clerk looked at me as though I'd asked to sing "Take Me Out to the Ball Game" from the press box. (Only celebrities like Vince Vaughan and Mike Ditka get to do that.)

"We don't give rain checks," he said impatiently.

The Cubs weren't giving rain checks because every game was sold out. And this for a team whose last World Series win was broadcast to the nation by telegraph.

Could it be that the Cubs' management has been more than indifferent to winning? Could it be that all these pennant-less years, they've actually been trying to lose? Losing prevents expectations that are expensive to meet, season after season. (Ask George Steinbrenner.) It has also created a fraternal bond among Cubs fans, who feel ennobled by their devotion to a hopeless cause.

In the last few World Series, baseball's other great curses have broken: The Red Sox erased the Curse of the Bambino in 2004, while the White Sox shattered the Black Sox curse in 2005. Now, the Cubs alone are fools of fortune. The punishing finger of the baseball god points only at 1060 W. Addison Street.

Loving Chicago, wrote Nelson Algren in "Chicago: City on the Make," is "like loving a woman with a broken nose."

So it is with the Cubs.

"I wouldn't like the Cubs as much if they won," a friend once told me. "If you like them when they lose, it proves you're a real fan."

One April, a fan showed up on Opening Day with a "Wait 'Til Next Year" sign.

The Cubs are both more and less than a baseball team. Less, because of their record. More, because Wrigley Field is the centerpiece of the city's most carefree neighborhood. When Big Ten grads have run out their four years of eligibility but want to keep partying, they move to Wrigleyville. Clark Street, which runs along the third-base line, is a pub crawl of sports bars devoted to the colleges their customers just left. Wrigleyville is a post-dorm-room, pre-subdivision spawning ground populated almost exclusively by 22- to 30-year-olds. "Cubs games" is an essential entry in the "Interests" section of their Match.com profiles.

I can describe the life cycle of a Wrigleyville resident in under 100 words, using my best friend's brother as an example. Butch Wax graduated from Michigan State University with a business degree. He moved to Wrigleyville at age 26, gave up his childhood allegiance to the Detroit Tigers and became a Cubs fan. At 30, he met a nice Jewish girl and moved into her apartment in a nearby singles neighborhood. Now 37, Butch lives in the suburbs, owns a $300,000 house, just fathered his first child and votes Republican. Yes, it's an uninspiring bildungsroman, but Wrigleyville does this to thousands of young men each year. If Florida is God's waiting room, Wrigleyville is suburbia's.

These are the "beautiful people" Obama was talking about. They're famous for what I call "Cub-dialing" -- shouting, "Hey, I'm at Wrigley," into their cellphones during a double play, or a scrum, or a chukker or whatever those nine guys are doing down on the grass. Unlike fans of teams in economically depressed areas -- the South Side's White Sox, for example -- Cubs backers don't need a championship to feel like winners. A World Series would be a great excuse for a party, though. In fact, Mayor Richard M. Daley is terrified that Wrigleyville will erupt in a Chicago-style car-tipping riot a week before the presidential election. That would be as bad for Obama's image as his recently convicted fundraiser, Tony Rezko. Under pressure from Daley, neighborhood taverns will stop serving alcohol after the seventh inning of series-clinching games.

So what if the Cubs win it all this year? Their fans won't have the patience to wait another century. They'll shed their identity as lovable losers and start demanding victory. The Cubs may even consider a painful move they've been able to avoid so far. The team's appeal is tied to a tiny, antique stadium that some believe is inimical to winning. Would the Cubs tear down Wrigley Field if they could replace it with a modern stadium, packed with luxury boxes that would bring in the revenue to pay Yankee-level salaries? Before making that decision, they'd have to face what's been every Cubs fan's conundrum for the last hundred years: Which do you love more -- winning or Wrigley?

So far, the answer has been Wrigley. If the answer ever becomes winning, the Cubs will be a better ball club. But will their fans still love them unconditionally? Feeling let down is so much a part of the Cubs experience that it's impossible to work up much anger or disgust when they lose. If the Cubs turn into the Yankees of the Midwest, the National League's Evil Empire, that could change. The crowd might start throwing batteries at opposing players, the way Yankee fans do. Then Wrigley -- or wherever the Cubs play -- would no longer be the Friendly Confines, and an afternoon with the Cubbies wouldn't be the green idyll that's drawn so many to the corner of Clark and Addison.

Thirty years ago, Joe Mantegna, Dennis Franz and a bunch of other Chicago actors mounted a play called "Bleacher Bums," about the aimless, amiable fans who blow their afternoons at Wrigley Field.

"Believe me, if the Cubs do win it all, I'll be the happiest guy in the world," Mantegna told Chicago magazine. "I'll be the first one to say, 'That's it. "Bleacher Bums" now becomes a period piece. It has no more relevance.'"

Then, like a true Cubs fan, he added, "I'm not holding my breath."

But you can bet that, even if they blow it, he'll be back next year.