Don't call it a bailout

The House learns its lesson, and with an eye toward Nov. 4, passes the Wall Street bailout -- er, rescue plan. 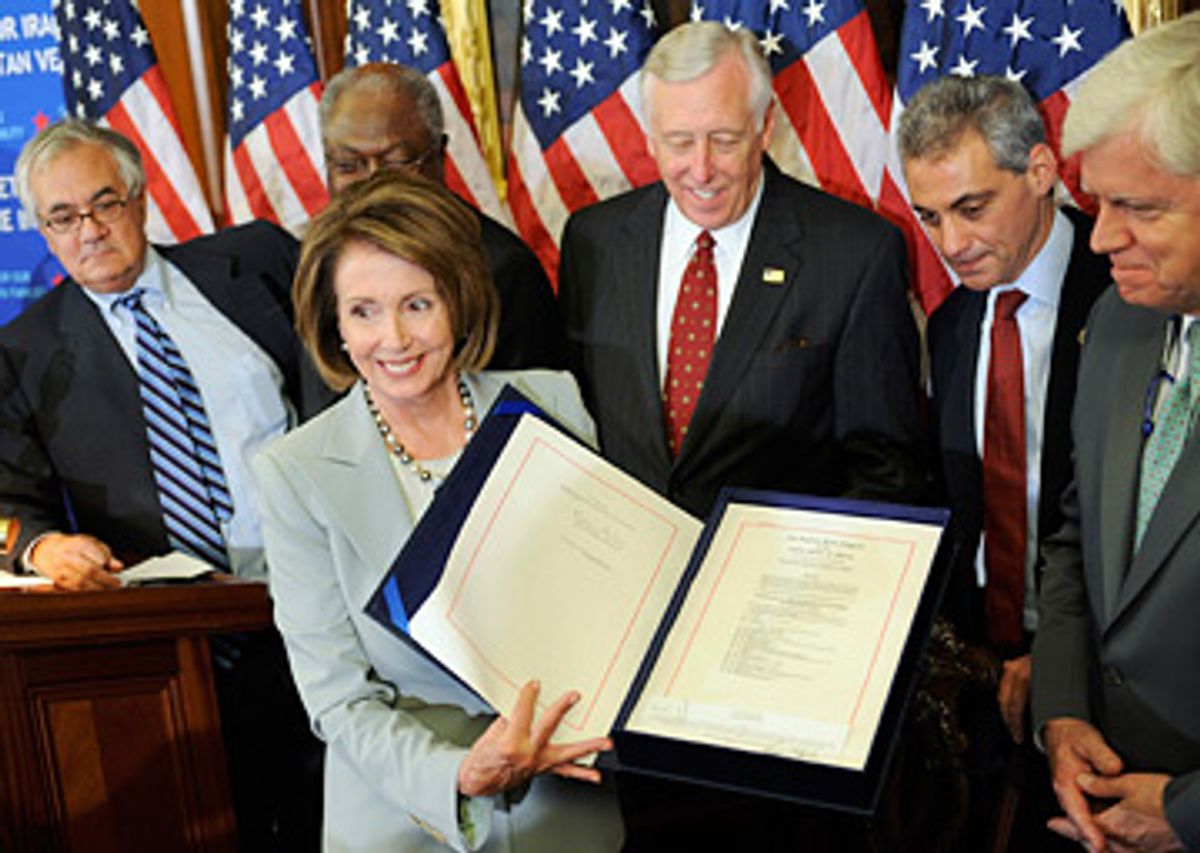 As Wall Street watched anxiously Friday afternoon, the nation learned exactly what the price of a few dozen votes in the House of Representatives is: about $1.2 trillion in stock market value, about $100 billion in new tax breaks and a big vote in the Senate. Oh, and also, a few wooden arrows. Congratulations -- besides some worthless mortgage-backed securities, you and every other taxpayer will also soon own about a 1/300-millionth share of the future of the domestic archery industry.

Given a chance at a do-over, on a bailout bill lawmakers said was much improved from the version they shot down Monday, the House voted easily to send the legislation on to the White House for President Bush to sign. (Which he did, barely two hours after the vote ended -- probably close to a new legislative speed record.) A combination of policy shifts to make the bill a little better for Main Street (as the cliché goes) instead of Wall Street and some good old-fashioned pork (the usual grease for the legislative process, this time in the form of targeted tax credits) did the trick. So a 23-vote deficit Monday turned into a 92-vote majority by Friday. This time, leaders in both parties appeared to have done a better job counting votes; as on Monday, most Democrats backed it (172 to 63) and most Republicans opposed it (108 to 91), but the measure still passed easily, avoiding another unexpected failure, which could have crippled both the stock markets and the reelection bids of a lot of lawmakers. As it was, the Dow Jones average fell 157 points anyway.

Politics, both of the presidential and down-ballot variety, had more to do with the final result than anyone was quite willing to admit. Polls taken this week showed most voters wanted the bailout to pass, and blamed Republicans for holding it up earlier. Supporters realized they had to do a better job of selling it than just sending Treasury Secretary Hank Paulson out to talk about liquidity. By Tuesday, after Monday's 777-point stock market plunge, politicians everywhere had stopped talking about "bailouts" and started talking about "rescue plans," and they started telling constituents less about financial services firms and more about companies having trouble making payroll or regular voters having trouble getting car loans due to the growing credit crunch. A flood of calls to Capitol Hill opposing the bailout slowed down, and more calls came in blasting lawmakers for dithering in the face of a crisis. Vulnerable lawmakers in both parties were more willing to vote yes.

Of course, John McCain's decision the week before to "suspend" his campaign, fly to Washington for an unproductive White House meeting, go on with a debate he first tried to cancel, and then watch his allies in the House mess the whole thing up, was only going to look worse if the House didn't follow the Senate's lead and approve the deal. McCain had come back to the Hill again on Wednesday to vote for the Senate legislation, as had Barack Obama. Though it wasn't clear, despite all that, how much McCain did to push the bill along in the end. "They told me he was going to call," Rep. Sue Myrick, a North Carolina Republican, told reporters about McCain's lobbying. "He didn't." But she still switched her vote from a "no" on Monday to a "yes" on Friday, in a sign of how quickly the mood had shifted on the plan. (McCain did call Arizona conservative Jeff Flake, who wasn't voting for the bill, but Flake said McCain didn't push: "I think he knew it was going to be a tough sell.")

Democrats, for their part, attributed the increase in support among liberals to an intervention by Obama. "When he called me, he knew exactly what I was concerned about," said Rep. Elijah Cummings of Maryland, a member of the Congressional Black Caucus, many of whose members opposed the bill earlier in the week but switched on Friday. "I think he did exactly the right thing."

The debate wasn't without a few odd moments, even if it was mostly without suspense after the House passed a procedural measure earlier in the morning that allowed the bailout to come up. Republican hard-liners who opposed the bill on philosophical grounds stuck to their guns. "We should confront this crisis with resolute courage, with faith in God and with faith in free enterprise," said Indiana Rep. Mike Pence, who helped lead the failed charge against the bill, conjuring up visions of fearful bankers reaching for Bibles and the collected works of Adam Smith as their ability to borrow money slips away. That was a frequent refrain -- the bill will lead to socialism, or something even redder.

It took Rep. Barney Frank, the imp from Massachusetts who can go toe-to-toe with Bill O'Reilly and who probably did more than anyone except Paulson to write the legislation, to point out how preposterous that notion was. There are plenty of reasons to find fault with the bailout, but it ain't exactly the first step in a leftist revolution. "Ever mindful of the danger that George Bush will lead us down the road to socialism, we will be monitoring this closely," Frank told the House.

By the time Speaker Nancy Pelosi gathered the Democratic leadership in a room off the House floor to gloat about their victory, any sense of the moment as historic had vanished; like a lot of legislation, its finish seemed anticlimactic. The formal copy of the bill arrived in front of Pelosi as she was speaking to the press, and she quickly got to signing it so it could be dispatched to the other end of Pennsylvania Avenue. But instead of any hushed reverence, the room erupted into shouts -- an army of photographers, it turned out, was blocking the shot for an equally large army of TV camera operators in the back of the room. "Stills!" the TV crews yelled out. "C-SPAN! Move that mic!" A couple of hours later, upstairs in Republican whip Roy Blunt's office suite (in the middle of which the House, for some reason, has nestled the workspace for magazine writers), staffers cracked open cans of Heineken and blasted "The Final Countdown" and "Cum On Feel the Noise" ('80s music being the natural soundtrack as $700 billion prepares to leave the U.S. Treasury). And a cloud of cigar smoke hung in the air. It was the smell of a victory for Wall Street -- but, if the dire predictions of economic collapse were right, maybe not a loss for the rest of us.