The death of GOP electoral tactics on the war

Contrary to what the political establishment claimed all year, Americans still hate the war and hate the GOP position on it.

Back in March, The Politico published an article -- reflecting conventional wisdom at the time (needless to say) -- which declared that the Iraq War would be a winning issue for . . . John McCain and the Republicans. The article, by David Paul Kuhn, claimed that public support for the war was surging; that this "promises to reshape the political landscape"; that "Democrats' resolute support for the withdrawal of U.S. combat forces may soon position them at odds with independent voters, in particular, a constituency they need to retake the White House"; that "the steady upturn in the public mood [about the war] stands to alter the dynamics of races up and down the ballot"; and that "no candidate stands to gain more than McCain."

The article quoted Michael O'Hanlon who, with characteristic insight and prescience, bolstered the storyline:


How could Democrats possibly hand McCain a better issue than to let him run on his record of advocating a robust U.S. presence in Iraq with all the positive battlefield news that is filtering out of that country? . . .Thinking about where we were at the time of the congressional elections, it's ironic that the Iraq issue could actually be the one that most favors the Republican and most other issues -- including most foreign policy issues -- could most favor the Democrats

As I noted at the time, those claims had no basis in reality. After last week's McCain-Obama debate and last night's Biden-Palin debate, one thing is now crystal clear: in proclaiming that Americans would once again Love the War and it would become a winning issue for McCain and the GOP, The Politico and O'Hanlon were as wrong as usual.

After the presidential debate last week, GOP pollster Frank Luntz said on Fox that, among undecided voters, Obama's strongest moments and McCain's weakest came when they clashed on Iraq, and later said that it is simply impossible for the GOP to win any debate on Iraq. Last night, GOP strategist Alex Castellanos on CNN said after the debate: "You know, Republicans aren't going to win debates on Iraq. I don't care who you put on that stage tonight, we're not going to win debates on Iraq, and we didn't tonight." And most notably, the best reaction Biden produced from the CBS focus group was when he demanded withdrawal from Iraq, and the worst reaction Sarah Palin produced was when she then spat out her tired right-wing slogan that Obama's withdrawal "plan is a white flag of surrender in Iraq": 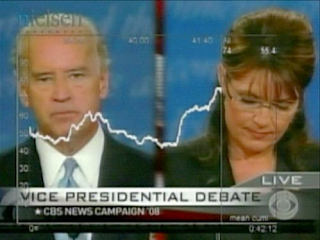 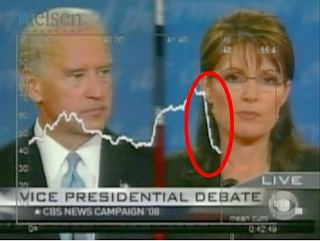 As Kos diarist Al Rodgers (who produced the images above) said about Palin's "white flag/surrender" insult: "it CRASHED like Monday's stock market, PLUMMETING 35 points." And the CNN and CBS snap polls showing Biden with a decisive win add further support for that view.

What is most notable about all of this is the broader point: there is a belief across the ideological spectrum (which I believe is wrong) that the Iraq disaster hasn't changed the way that Americans think about war and foreign policy generally, but rather, merely reflects the long-standing fact that Americans only dislike wars that the U.S. is losing. At least now, this is plainly untrue. Many Americans have become convinced by the silly though widespread claim that the Surge Has Worked and that we are now "winning" in Iraq. But -- as I've documented many times, and as is still true -- increased perceptions of stability and even "victory" in Iraq have had very little effect on how Americans perceive of the wisdom of the war and, most importantly, whether we should withdraw.

As that polling data conclusively shows, despite the increase in the perception of "victory," Americans favor a timetable for withdrawal almost as much as they did last year. Americans hate the war every bit as much, view it as a mistake just the same, and thus -- as even GOP strategists recognize -- the Iraq War is an absolute losing issue for the Republicans. And Obama's large and growing lead -- despite (really: "because of") his smart refusal to take Mike O'Hanlon's year-long advice to abandon his withdrawal plan for Iraq -- speaks for itself.

It's an important development that Sarah Palin's snide invocation of the old and previously effective GOP war-monger canard -- that opposing the continuation of a war is to "wave the white flag of surrender" -- blew up right in her face. It's even more important that Americans continue vehemently to oppose a war despite the increased perception that the U.S. is "winning", and continue to believe the war was a grave mistake and are demanding its unconditional end. That reflects a sea change in how war generally is perceived. And most of all, despite the best self-serving efforts of the pro-war political establishment all year long to impose on Americans a belief that they plainly do not hold -- namely, that the Iraq War is now popular again and should be continued and that the war will therefore help the GOP -- it is still a heavy, potentially fatal, anvil around the neck of John McCain and the entire GOP apparatus.