Sean Hannity, Robert Gibbs and anti-Semitism: How to go on Fox News

Over the weekend, Sean Hannity hosted a "documentary" on Obama in reliance on a notorious, deranged Jew hater -- a fact that an Obama spokesman puts to good use.

For the third debate in a row, actual polling data last night (as well as uncommitted focus groups) revealed that most Americans believe that the Democratic candidate (Obama/Biden) won decisively. In stark contrast, this is what the poll of Fox News viewers found:

In the real world among Americans, Obama won the debate by 15-30 points, but in Fox News World, McCain won the debate by 86-12%. That's what Fox News is and who their viewers are: a right-wing propaganda outlet with an almost entirely unpersuadable viewership. For that reason, I don't understand why the Obama campaign helps legitimize them as a real news network by appearing on Fox programs. But the Obama campaign obviously disagrees and regularly does so.

Agree or disagree with that tactical choice, any Democrat preparing to go on Fox News should study how Obama communications director Robert Gibbs mauled Sean Hannity last night and copy and learn from it as though it is Scripture (video below). First, a bit of background: in the 1980s and 1990s, Anthony Martin-Trigona was well-known to New York litigators as a source of warped entertainment, wonderment and universal disgust.

For years, Martin-Trigona ran around continuously suing so many random people on a pro se basis -- and when he would lose, he would then sue the lawyers who represented the parties he sued and the judges who ruled against him -- that the Second Circuit Court of Appeals actually barred him from commencing any further judicial process without prior authorization, an unprecedented and truly extraordinary order. Some of that history is set forth here. Martin-Trigona would file so many new, rambling lawsuits and motions on a virtually daily basis that, as the Second Circuit pointed out, it actually became impossible for courts even to process: "Martin-Trigona's voluminous filings have 'inundated' the District of Connecticut and his activities have burdened judicial operations to the point of impairing the administration of justice."

It wasn't just the quantity but the content that made his litigious behavior so notable. The documents he filed were routinely filled with the most extreme anti-Semitic venom one could find anywhere this side of Mein Kampf. The lawsuits were often based on the theory that a cabal of Jewish judges, lawyers and government officials were conspiring against him, and the Complaints he filed would be filled with artfully-constructed allegations along these lines:


Paragraph 8: On July 12, 1988, the plaintiff-Jew met with aforementioned Jew lawyer to prepare for hearing with the Jew judge.

That's a paraphrase from memory, but it's a quite accurate illustration of what his documents routinely contained. In 1986, he ran for Congress in Illinois under this campaign committee: "The Anthony R. Martin-Trigona Congressional Campaign to Exterminate Jew Power in America," and he wrote sympathetically of the Holocaust. As The Washington Times described this year:


In a New York bankruptcy case, he referred to a judge as a "crooked, slimy Jew." During the bankruptcy dispute, he filed a civil-rights lawsuit claiming Jewish bankruptcy judges and lawyers were conspiring to steal his property. He asked a court to bar "any Jew from having anything to do with plaintiff's property."

In another motion in the case, he wrote: "I am able to understand how the Holocaust took place, and with every passing day feel less and less sorry that it did, when Jew survivors are operating as a wolf pack to steal my property."

After the mid-1990s, Martin-Trigona re-surfaced in Florida with a name change ("Andy Martin"), ran for public office multiple times as a Republican (even the local GOP repudiated him), then became a vocal supporter of Rudy Giuliani's presidential campaign, and finally an obsessive "investigator" of Barack Obama, trafficking in the filthiest and most deranged muck that for months stimulated the darkest crevices of the right-wing slime machine. As The New York Times put it, Martin "is credited as being among the first -- if not the first -- to assert in a chain e-mail message that Mr. Obama was secretly a Muslim."

Over the weekend, Sean Hannity hosted a show on Fox News entitled Obama & Friends: The History of Radicalism. The star of Hannity's smear fest was none other than Andy Martin, who was featured as an honored, credible investigator and source to expose "the real Barack Obama." There wasn't a hostile or adversarial word uttered by Hannity about or towards Martin. To the contrary, Martin's claims were the basis for many of the Fox News show's allegations against Obama. This is how Fox described him on-screen when he spoke: "Andy Martin, AUTHOR & JOURNALIST": 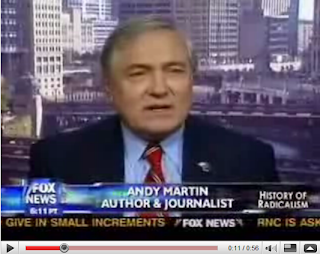 Hannity turned to Martin after asking what Obama means by "community organizer," and Martin explained that Obama "was in training for a radical overthrow of the government" -- and Fox then promoted Martin's book:

Martin then linked Obama to Louis Farrakhan, Hugo Chavez, and Fidel Catsro, telling Fox's 2 million viewers: "So if you love the Cuban revolution and Castro and if you love what's happening in Venezuela with Hugo Chavez, you'll love Barry Obama -- Barack Obama, as he calls himself -- in the White House."

Hannity never once said a negative word about Martin; never challenged him on anything he ever said or did; and never informed Fox viewers about Martin's despicable, truly demented history. Instead, Martin was Sean Hannity's respected source, presented as an "Author and Journalist" to support Hannity's "reporting." As Fort Lauderdale's Sun-Sentinel put it: Fox's "star witness was Andy Martin, whose incendiary, unsubstantiated claims about Obama's past were allowed to go unchallenged."

All of that led to last night's masterful appearance by Robert Gibbs on Hannity & Colmes after the debate. Gibbs obviously knew that Hannity was interested in asking him only about the most vital issue of the day in the world of right-wing extremism -- the exciting attempt to link Obama to Bill Ayers through rank guilt-by-association -- and this is the superb exchange that ensued:

If Democrats are going to subject themselves to the low-life tactics of Fox News, that's the only way to do so -- by taking their deceitful standards and, in every instance, applying it to Fox and their "journalists." Fox News just produced a "documentary" about Obama in reliance on someone like Andy Martin, whose history was concealed from the poor, endlessly propagandized Fox viewers, and yet the myth that Fox is a legitimate news network will continue to be widely maintained.

One other note: the Anti-Defamation League, needless to say, has not uttered a peep about Fox News and Hannity's promotion and legitimizing of Andy "crooked, slimy Jew" Martin, because doing so would undermine the ADL's now patently transparent GOP-supporting agenda. As I've documented on several occasions in the past, the ADL routinely ignores instances of blatant Holocaust-trivializing and other acts of game-playing and exploitation of anti-Semitism when coming from Fox News, which generally supports the ADL's political agenda having nothing to do with its claimed mission.

And that's to say nothing of the entire cottage industry of pundits and activists that routinely finds and screams about "anti-semitism" at the slightest imaginary provocation when doing so advances their right-wing political agenda or can be used to smear political opponents or suppress debate -- from Joe Lieberman, Lanny Davis, Charles Krauthammer, and Bill Kristol to the righteous anti-bigotry advocates at Commentary Magazine -- none of whom have uttered a peep about Fox News' promotion of and reliance upon Andy Martin, despite (for most of them) having gone on Fox News since then -- despite having, to use their parlance, associated with Fox News since the Hannity/Martin show -- without uttering a syllable of condemnation. As usual, those who most flamboyantly and frequently inject screams of "anti-semitism" into our political debates do so only when the accusation serves as a tool for their partisan agenda (see here and here for a particularly disgusting though typical recent example). Nothing has "trivialized" the accusation of "anti-semitism" -- or anti-semitism itself -- more than that manipulative behavior.