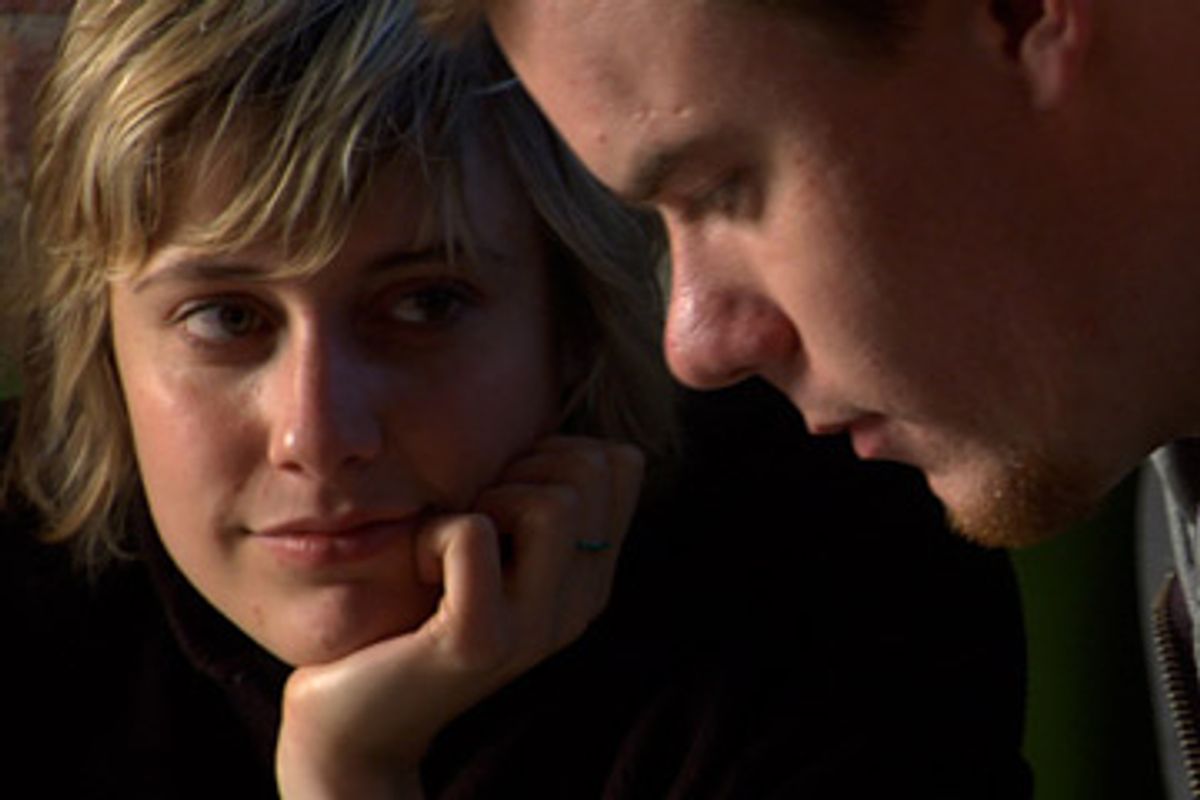 Greta Gerwig and Joe Swanberg in "Nights and Weekends."

As I've opined recently, I have mixed feelings about the wave of ultra-low-budget realism found on the outer edges of American film these days. Still, as counterintuitive as it may seem, 2008 now feels to me like a watershed year, one that's brought us intriguing new work from all kinds of nearly unknown directors. True, the moviegoing public has paid virtually no attention, but you can't have everything.

This week the micro-indie object of my affection is "Nights and Weekends," a high-intensity, high-nudity improvised relationship drama co-directed by Joe Swanberg and Greta Gerwig, who also play the film's central couple. (Swanberg is already known for the raunchy, no-holds-barred, semi-comic sex scenes in his other films, and this one won't disappoint on that front.) "Nights and Weekends" knocked me out when I saw it last March at the South by Southwest festival in Austin, Texas; I wrote at the time that it offered exactly the "prickly, flawed, urgent SXSW experience I'd been waiting for."

I'm not sure I can top the freshness or honesty of my first reaction -- this is a movie that people will react to strongly, in both directions. Swanberg is a brave and ambitious young filmmaker who's been taking chances, and taking his lumps, in public. I think "Nights and Weekends" is the movie where his talent, and his earnest Cassavetes-meets-Spike Lee-on-IM searching, begin to find a mature expression. Here's what I wrote:

Swanberg is a young Chicago director associated with the so-called mumblecore movement, but maybe after 'Nights and Weekends' we can retire that term forever. This is a vastly leaner and more elliptical film than "Hannah Takes the Stairs," the ambitious, self-conscious ensemble piece Swanberg premiered last year here -- and for which he took a critical kicking after it became the first mumblecore film to find mainstream release.

Swanberg and Gerwig (the self-absorbed, serial-monogamist title character in "Hannah") co-directed "Nights and Weekends" and appear together in every scene and almost every shot. In the first half of the film their characters, James and Mattie, go through the rapid meltdown of their long-distance New York-Chicago relationship. In the second they meet a year later, long after their breakup and discovering that the passionate push-pull dynamic between them hasn't faded. Other people exist only as background or as fateful catalyst: In section two they meet James' brother, sister-in-law and infant niece, representing a family life they'll never have; in section two a photographer who's shooting James assumes they're a couple, and urges them into ever more intimate and affectionate poses.

Take away their cell phones and throw some different outfits on them, and James and Mattie could be characters from Cassavetes or the French New Wave or Bergman. (Whether accidentally or not, the film contains echoes of "Last Tango in Paris," "Scenes From a Marriage" and "Une liaison pornographique," to name a few.) They're adults on the cusp of headlong transformation, and in the year they're apart they become notably more self-assured and develop more expensive tastes. Their pathologies have also hardened; Mattie has become visibly crazier and more needy, while James' insensitive-dick tendencies are no longer outweighed by his earnestness and intensity.

At the post-screening Q&A Swanberg and Gerwig -- who despite all the rampant on-screen coupling are not romantically involved in real life -- explained that making the film had drained them, and that they saw the end of James and Mattie's relationship as a corollary to the end of their own working relationship. The two segments of "Nights and Weekends" really were separated by a year, which was an accidental result of their herky-jerk, no-budget production process but in this case a crucial one. This is a new-school independent film with old-school integrity, one where nakedness is more a matter of emotion than physique, one whose makers risked something more important than money. (Which they didn't have in any case.)

At least two people I talked to afterwards absolutely hated "Nights and Weekends." Four others, myself included, felt energized and exhilarated by it. Word spread after the screening that IFC has acquired the film for theatrical and video-on-demand release, so both of those reactions will be replicated on a larger scale. The thing is, there we were, standing around in the chilly Texas night outside the grim concrete slab of the Austin Convention Center, arguing about a movie that had moved us and unsettled us and pissed us off, instead of retreating, anesthetized, into our caves. That right there was enough to make my weekend.

"Nights and Weekends" is now playing at the IFC Center in New York; other cities may follow. It's also available on-demand via IFC Festival Direct on many cable-TV systems.