Budget cutting? Take a hatchet to the war on drugs

Every year we throw away billions on a failed program to punish addicts -- an approach both candidates should know doesn't work. 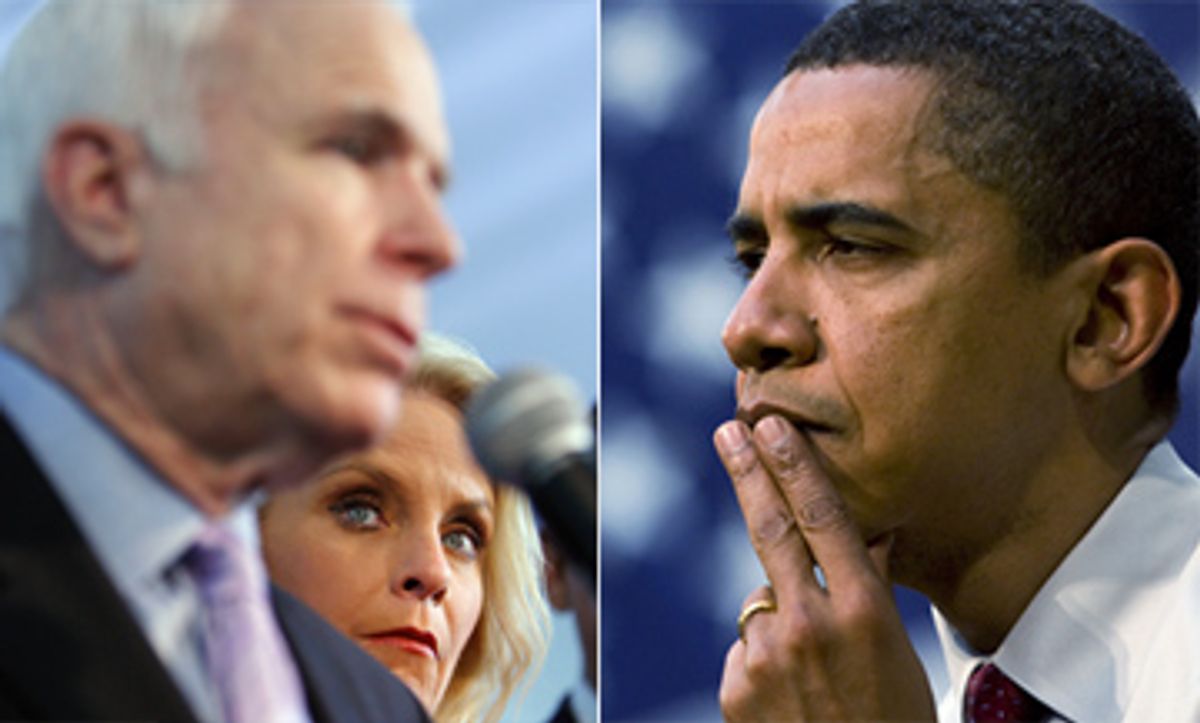 If Barack Obama or John McCain wants to find a federal program that wastes hundreds of billions of dollars, he can take the scalpel (or better yet the hatchet) to the national war on drugs. Economists, physicians, police chiefs and prison wardens have repeatedly concluded that the drug war has been a very costly failure over the past four decades, but then neither Obama nor McCain needs to hear the truth from any expert -- because each of them can draw on his own painful personal experience.

From opposite ends of the social and economic scale, both candidates have observed the casualties and injustices of American drug policy. Both should be able to understand why the system of punishment must be replaced by a paradigm of medical treatment. And both seem reluctant to discuss the subject for obvious reasons.

In "Dreams From My Father," his candid and moving memoir, Obama admits that as a young man he got high, using marijuana regularly, and that he was on the way toward something worse during his high school and college years. Although he stops just short of confessing that he snorted cocaine occasionally, when he could "afford" it, he has never denied using coke, as the book clearly implies. He watched at least one friend go to prison while others succumbed to heroin addiction.

"Junkie. Pothead. That's where I'd been headed: the final, fatal role of the young would-be black man," he writes.

After Obama overcame the angst that had had caused him to seek solace in dope, he tells of watching the devastation of Chicago's South Side -- and especially of the children who lived there -- by the crack epidemic. Government and society seemed powerless to prevent the ruin caused by crack and smack; the Prohibition-like policies that drove up prices, tempted kids to become dealers and corrupted the police force accomplished nothing.

As a community organizer, Obama came to know those alienated, dangerous kids and their families intimately. The only certainty for him was that the young people swept up into addiction, prosecution and incarceration were not to blame for their circumstances -- that they were "the consequences of a malnourished world."

Meanwhile, upstairs in the overnourished world, beer heiress and Senate wife Cindy McCain was scheduled to write her own memoir this year. Last spring she got an advance that reportedly came close to a million dollars for a book that would tell not only about her relationship with her husband, John, but, according to the Wall Street Journal, would also recount "her past battle with an addiction to painkillers." Originally scheduled to appear in September, her book was abruptly canceled only a month after the publisher bought it. The McCain campaign explained that with the demands of campaigning, she simply wouldn't have the time (despite the hiring of a ghostwriter).

But it is hard to imagine why she or husband John would want to excavate any unhappy memories of her Percocet period. Her battle with addiction included a series of major felony offenses in the early '90s, which included falsifying prescriptions, stealing drugs from a medical charity she founded and underwrote with her family fortune, and inducing doctors and other employees of that charity to help her obtain Percocet and other Schedule III narcotics illegally. The Drug Enforcement Administration opened an investigation of her after a former employee, whose name she had used to obtain drugs, reported her criminal misuse of her charity. At the time, seasoned defense attorneys in Arizona believed that she could face up to 20 years in prison if convicted on half a dozen counts (and that if her name had been José Lopez, she surely would have).

But Cindy McCain avoided prosecution by federal authorities. Instead, like so many other wealthy and high-profile drug offenders -- and unlike so many of the young offenders Obama knew, whose crimes were no worse than hers -- she was allowed into what is known as a "diversion" program. Rather than being sent to jail, she went into rehab. Now it's as if none of those terrible things had ever happened to her -- and why would anyone bring them up?

The only reason to talk about past drug abuse by Barack Obama or Cindy McCain is to point out the waste and injustice of the ongoing drug war. Both of them broke the law, repeatedly, by their own admission, but neither deserved to go to prison and no useful purpose would have been served by punishing them.

Today we spend well over $50 billion annually at the federal, state and local levels on a domestic war that has never achieved any of its objectives and never will. If either of the presidential candidates still believes that this is a worthwhile investment of our money, despite his own experience, it would be fascinating to hear him explain why.