Put off by the McCain-Palin ticket, suburban Republicans are backing Barack Obama -- who might score a rare Democratic win in the Hoosier State. 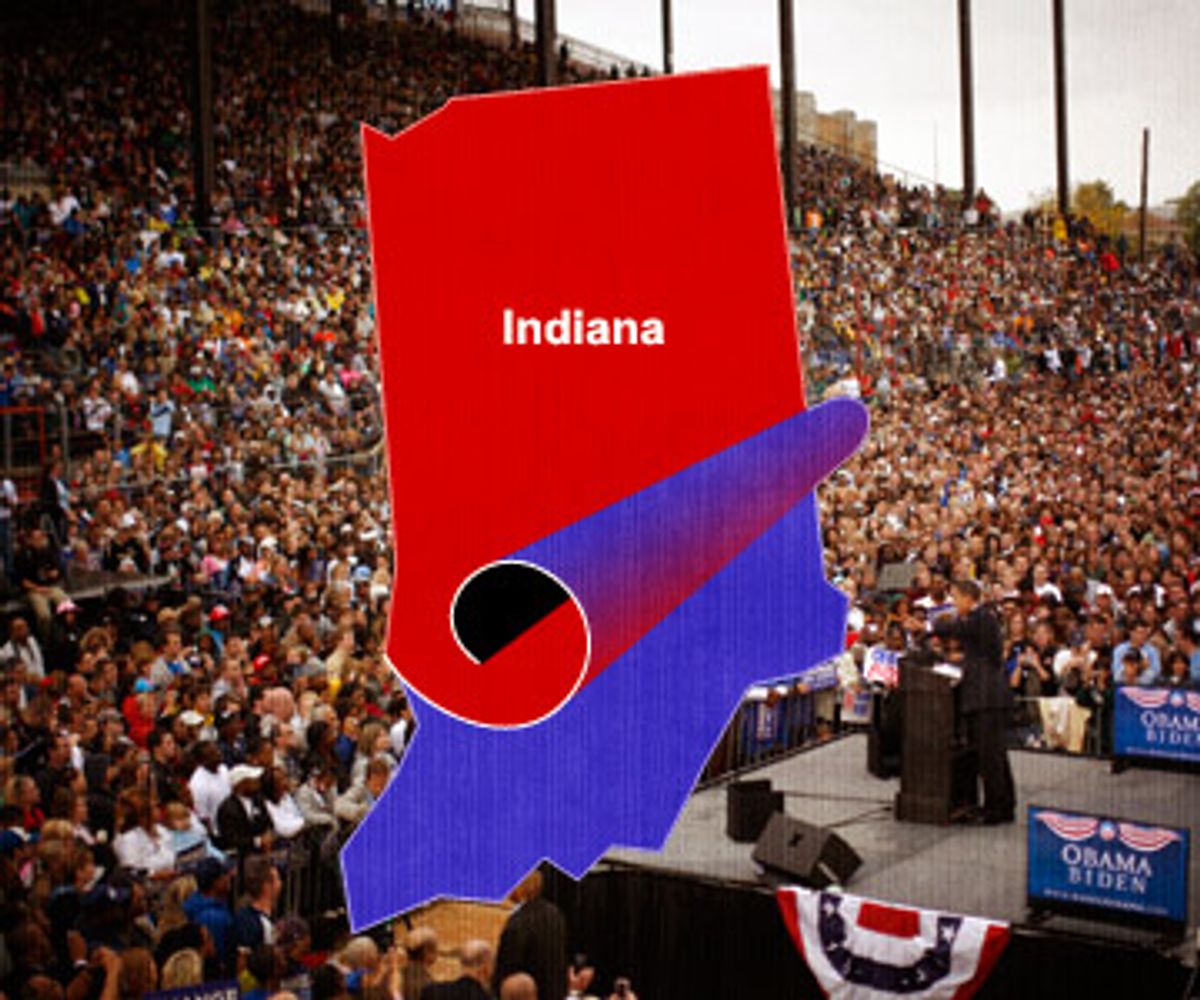 In presidential elections since the Depression, Indiana has been the lone industrial state where the elephants always roam. For all the talk of independent Hoosiers, the state has gone Republican in 16 of the last 17 races for the White House, with Lyndon Johnson in 1964 the sole exception. In 2004, the networks began painting Indiana Republican red exactly two minutes after the polls closed with the breathless verdict justified by George W. Bush's eventual 60 to 39 percent rout of John Kerry.

So what was Sarah Palin doing in the northern Indianapolis suburb of Noblesville Friday afternoon motivating the GOP faithful? Why are Barack Obama and the Republican National Committee advertising heavily on Indianapolis television? How come most recent polls (there have been only a handful of statewide surveys this month) show Obama within striking distance of the lead? Why has Indiana become 2008's most unlikely battleground state?

Obama's unexpected strength here cannot simply be attributed to the Chicago media market, which reaches only about 20 percent of the state, or a heavy African-American vote (Indiana is 86 percent white). The hotly contested May 6 primary, which Hillary Clinton won by a 51 to 49 percent margin, did attract 1.27 million Democratic voters, about 300,000 more Hoosiers than turned out for Kerry four years ago. Indiana -- whose economy more revolves around manufacturing than that of any other state -- has also lost 150,000 factory jobs since 2000, and its 6.2 percent unemployment rate in September was close to a 20-year high. "What has changed in Indiana," says Dan Parker, the Democratic state chairman, "is that in manufacturing towns, people are voting less on social issues and more on the loss of jobs."

But if Obama wins the state, more than anything it will be due to the best voter-contact operation Indiana has ever seen. Even Murray Clark, the Indiana Republican chairman, says with grudging admiration in his voice, "Obama's done these things right. That's how he nearly beat Hillary in the primary."

Ignored for decades by presidential candidates, Indiana in 2004 boasted a dubious distinction -- the lowest turnout rate among registered voters (57.4 percent) of any state in the union. Had the Obama campaign been pinched for cash instead of raking in a jaw-dropping $150 million in September, Indiana probably would have remained the Midwest's leading flyover state. Instead, buoyed by the primary turnout, the Obama team saw opportunity amid the decades of neglect. As Emily Parcell, the Indiana Obama coordinator puts it, "Unlike Iowa, where every election is hard fought and where a good field operation can add only about 3 percentage points, there is a much greater opportunity for a good field operation here. Hoosiers are not used to Democrats coming to their door. They're not used to being told about early voting."

Finding Democratic voters in fast-growing suburban Hamilton County, just north of Indianapolis, seems as unlikely as spying a herd of giraffes frolicking in a mall parking lot. In 2004, Bush rolled up the kind of victory in Hamilton County that Vladimir Putin might envy -- obliterating Kerry by 51,000 votes with a 74 to 25 percent margin. Yet Obama has two storefront offices in the county (among 44 offices statewide) and is running an aggressive canvassing operation. This unusual commitment of resources is not lost on the Republicans. "Obama's campaign has targeted the Doughnut Counties" -- local lingo for the eight counties that ring Indianapolis --"particularly Hamilton County," says Clark, the GOP chairman. "They are targeting upscale voters, particularly women."

About a dozen Obama canvassers headed out Saturday morning from the newly opened campaign headquarters in affluent Carmel; I accompanied Barbara Kirk, a retired psychotherapist wearing a black Obama T-shirt with a peace sign in place of the "O," and Beth Maier, a photographer who just moved to Indiana with her husband, a medical scientist. They were making the rounds in the Smokey Ridge neighborhood, where houses list for about $500,000. Carmel, where 89 percent of all high school graduates attend four-year colleges, is not anything like a typical Indiana community. But this is an area where the downside of the Bush era's hard-right tilt of the Republican Party can be observed -- as upscale moderate voters who might be attracted to John McCain for economic reasons recoil because of the social conservatism symbolized by Palin's presence on the ticket.

Laurie Dwyer, a youthful looking 62-year-old woman wearing a Citadel T-shirt (her husband's alma mater), is just this sort of repentant Bush 2004 voter. "I don't say that I'm a Democrat or a Republican," Dwyer told the Obama canvassers, after admitting that she would be voting for their candidate. "I just think that McCain did us all an injustice by choosing his running mate. McCain has made so many mistakes running his campaign, who knows what he would do as president." Offered an Obama lawn sign, Dwyer, presumably thinking about the reaction of her neighbors, said softly, "I better not." (Her precinct went for Bush in 2004 by a vote of 780 to 247.)

A few blocks away, Bruce Babcock, a lifelong Republican and a retired executive with a Fortune 100 company, had no reluctance about advertising his newfound political allegiance with an Obama sign. "Bush has not done a very good job. And the Republicans don't deserve another chance at all." Babcock’s last words were designed to underscore that he has no animus toward McCain: "They'd have to resurrect Lincoln to get me to vote Republican."

There is a danger in political reporting of extrapolating too much from anecdotal evidence. And a candidate's canvass list should never be confused with a random sample, though it can be an effective way to identify up-for-grabs voters. But my personal theory (and it explains my fascination with Hamilton County) is that affluent Republican suburban voters may be the leading edge of a pro-Democratic political realignment that could represent Karl Rove's lasting gift to the GOP.

Take John Salter, a 35-year-old doctor and 2004 Bush voter who stressed to the canvassers that he was in the income bracket (above $250,000 a year) that would pay higher taxes under Obama than McCain. Still, his words and tone suggested that he was leaning toward voting Democratic. "In the end, I care about my money," Salter said. "But I like it when Sen. Obama says that we all have to do our part. And maybe my part is to pay more taxes."

Make no mistake, McCain is going to win Hamilton County (the largest of the suburban Indianapolis counties) by a hefty margin. But the error that Kerry made in battleground states like Ohio in 2004 -- a miscue that may have cost him the White House -- was to concede suburban and rural counties to the Republicans and concentrate on maximizing the Democratic vote in urban areas. Shaving, say, 50,000 to 100,000 votes off the Republican edge in the Doughnut Counties could help make for a long night of vote counting in Indiana. Brian Howey, the founder of Indiana's most influential political journal, predicts, "If Obama wins the state, it will be as narrow as Hillary's primary win." Howey is impressed by the vigor of Obama's ground effort in Republican areas: "These are tools that will offset the racial factor --or whatever you want to call it -- in southern Indiana."

Conservative Democratic voters in the Ohio River towns like Evansville and Madison may prove an insurmountable obstacle to Obama's dreams of joining LBJ, Franklin Roosevelt and Woodrow Wilson as the only Democrats to carry Indiana in the past 120 years. As Jennifer Hallowell, the former executive director of the Indiana Republican Party who is now overseeing the McCain campaign's efforts here and in Wisconsin, argues, "There are a lot of Democrats in southern Indiana who are socially conservative and fiscally conservative. Barack Obama is a liberal. His message is not going to appeal to a majority of Hoosiers."

Both Halloway and Clark suggested, without spelling out the details, that the McCain campaign intends to invest greater resources in Indiana during the closing two weeks of the campaign. Still, the day after Palin's visit to Noblesville (in Hamilton County), associate editor Russ Pulliam wrote in a column in the Indianapolis Star, "McCain opened the door to Obama in Indiana by taking the state for granted." There were no McCain ads visible (at least to me) on Indianapolis television over the weekend, although an RNC spot lambasting Obama for his lack of "executive experience" (unlike, of course, fellow senator McCain) was in full rotation. By my reckoning, I saw four different Obama ads in two days, with the most frequently aired commercial featuring Indiana's Barney Smith, a laid-off RCA worker from Fairmont, repeating the same catchphrase that he used in his speech to the Democratic convention, "It's time for a president who puts Barney Smith before Smith Barney."

It is intriguing that the Friday afternoon Palin rally, which drew about 20,000 people to a partly open-air music arena, was almost exclusively designed to motivate the GOP's conservative base. With the seats under the pavilion (as opposed to standing room in the rear) mostly reserved for volunteers who made at least 100 phone calls, the McCain campaign estimates that 90,000 telephone pitches were made in advance of the Palin visit. As Clark explained, "There were not a whole lot of voters who will be persuaded to vote for McCain because of Palin coming here, but there are a lot of ancillary benefits."

The Palin event itself was surprisingly pallid, with few new attack lines from the vice-presidential candidate, whose amplified voice does not carry well in an outdoor setting. Maybe Hoosiers are unusually polite, but there was not even a hint of an ugly undertone to the rally, besides the good-natured ritual booing the first time Palin referred to the "mainstream media." But Palin's predictability had its appeal to the GOP faithful. "She was exactly what I see on television all the time," said Regina Jackson, a manger for a product development company, who lives in Pendleton in Madison County, just to the east of Hamilton County. "What I like about her is that her message is always the same. It never changes." Less than two months after being vaulted from obscurity onto the national ticket, Palin is already into her greatest-hits phase.

With its 11 electoral votes, Indiana -- like Virginia and North Carolina (which were closer and more contested in 2004) -- is a Republican state that McCain simply cannot afford to lose. But Democrats here are still in a pinch-me-I'm-dreaming mood as they find themselves on the front lines of a battleground state. "We've never had attention before," marvels Dan Parker, the state chairman. "We've been attention starved." While overcoming a 500,000-vote deficit from 2004 remains a daunting challenge for Obama, many Hoosier Democrats would be privately thrilled if on Election Night, Indiana sits there for a few hours in the middle of the television maps -- neither red nor blue -- as it takes a long-awaited star turn as "Too Close to Call."