Another election nightmare in Florida?

The Obama campaign has inspired a wave of early voters -- but the waits have been long and some fear havoc on Election Day. 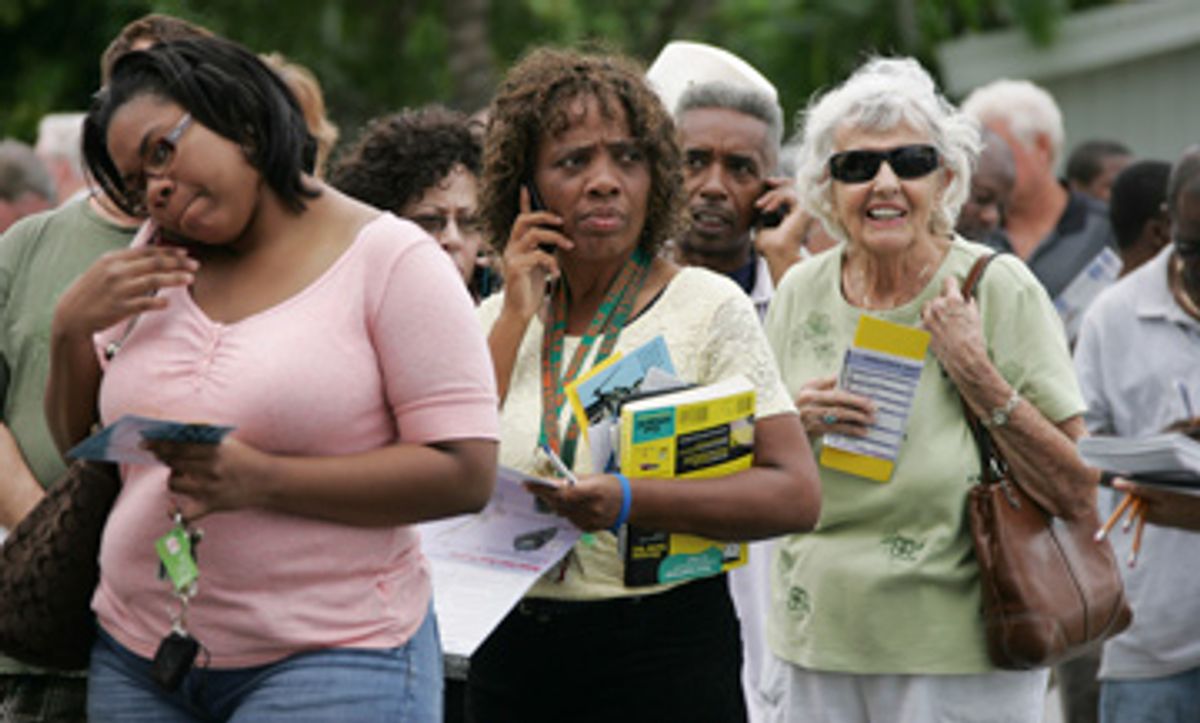 Sure, Ted Ravelo likes Barack Obama. But two hours is a long time to stand in line to vote, especially considering that it's still October. "This has to be remedied," Ravelo, 72, said Wednesday morning, shaking his head, as he gave up on voting early -- at least that day -- at the North Miami Public Library, where a couple of dozen voting machines and their operators were struggling in vain to keep pace with a flood of citizens. "Something has to be done." A line stretched two blocks from the building, as other voters doggedly stood -- or sat on the folding chairs many of them had brought along -- for up to two hours while waiting to cast their ballots.

It may have been a bit too much for Ravelo. He said he'd probably have to give it another shot on Election Day, and that his daughters -- who have to work on Nov. 4, and who sent him to scout out the wait time -- might not get to vote at all. But compared to Monday here, when early voting opened, two hours on Wednesday was a breeze; on the first day, officials and community activists said, the wait was three times that long.

A visit to Florida in the waning days of the 2008 presidential campaign threatens to evoke a certain sense of déjà vu for another late October eight years ago. Once again, polls show the state is deadlocked -- and once again, there's a very real possibility that a lot of people who support the Democratic candidate could have trouble voting.

This time, of course, it won't be butterfly ballots or Brooks Brothers riots that get in the way, and there's no chance Pat Buchanan will pick up any votes from confused elderly Jews in Palm Beach or any other county (if only because he's not running). But even so, a combination of heavy turnout and widespread confusion over new I.D. laws at the polling places could overwhelm the system again. "I don't believe that anybody's going to be ready for the onslaught of voters," said Roger Weeden, an Orlando lawyer who's working with Election Protection, a national coalition of civil rights and public interest groups that will monitor problems with voting around the country through Nov. 4. The new law -- known as "no match, no vote" -- says you need identification at the polls, and your driver's license I.D. number or Social Security number must match what's in state or federal databases; if the data's wrong, you have to either cast a provisional ballot or fix the mistake. Rumors are flying, especially in minority communities, that the law is even more restrictive. On Tuesday night, Miami's "Hot 105" soul station spent a good 30 minutes during the evening rush hour discussing potential voting problems.

Another difference this time around, though, is that Obama's campaign seems to be ready for problems. Part of the reason early voting has been so busy (nearly half a million people voted in Florida in the first three days) is because the campaign isn't shy about telling supporters to get out and vote ahead of time. "You can vote early right here and right now," Obama told about 30,000 people at a downtown Miami rally Tuesday night. Aides were concerned enough that some of the wilder rumors would  suppress turnout that they sent a campaign lawyer out to warm up the crowd before Barack and Michelle Obama appeared. "How many of you have heard the rumor that you won't be allowed to go to the polls and vote if you're wearing a Barack Obama button or T-shirt?" the lawyer asked, getting a big roar from the crowd. "Well, guess what -- that's just not true."

Obama's team has been gearing up to turn people out, focusing especially on getting them to vote early and avoid the crunch on Nov. 4. More than 100 field offices are set up around the state; deputy campaign manager Steve Hildebrand and his consulting partner Paul Tewes, the duo who engineered the field strategy for Iowa and other early primary and caucus states that helped Obama win the nomination, moved to Florida a few weeks ago to help run their massive operation here. So far, it looks effective: More than 54 percent of the early ballots in have been cast by registered Democrats, according to state statistics, which might help offset a Republican edge in requests for mail-in absentee ballots.

Judging from what some people were saying -- at the Tuesday night rally and among those voting the next morning -- Obama's campaign didn't have to scare anyone into participating early. "I didn't want to take a chance of something happening and me not getting my vote in," said Rony Francis, 43, who directs operations for a transportation company. He waited 90 minutes to vote at the North Miami library, where most of the voters who joined him were Haitians and other immigrants.

"It's always in your mind, especially after eight years ago," said Al Morrell, 51, a truck driver, also from North Miami. "So you gotta be a little wary."

The night before, Tasha Thomas, 26, who works at the University of Miami's veterinary school, had told me she'd been besieged by weird, panicky questions from supporters since she started volunteering at the Obama field office in her Miami neighborhood. People thought they couldn't vote if their voter registration card was starting to fade, or thought they had to go back to the state where they were born to vote, even if they lived in Florida now. "It was eye-opening, how much wrong information so many people have," she said.

Election Protection plans to have lawyers roaming from polling place to polling place around the state on Election Day, ready to help voters who can't find their precincts or have questions about the process. (Though the group is officially nonpartisan, there's not much doubt that anyone working hard to increase turnout is probably sympathetic to Obama.) "Voter suppression is something that anybody who has any sense of commitment to democracy or civil rights would want to fight against," said Weeden, a criminal defense lawyer who also helped monitor election sites in 2004. Back then, he and other volunteers encountered people who had been called and told their polling places had changed, or found suspicious characters lurking outside precincts with clipboards, asking people if they had met rigorous requirements to vote that went above and beyond what the law says.

While McCain is contesting the state as furiously as he is any other battleground -- he made several stops on a bus tour along Interstate 4 on Thursday, crossing from the Atlantic coast to the Gulf of Mexico -- his top surrogate, Gov. Charlie Crist, hasn't been entirely on message when it comes to issues surrounding the ballot box. (Some local Republicans say prospects for the McCain campaign here are looking dim anyway.) In most states, Republicans are busy whipping up a frenzy about alleged voter fraud, mostly trying to tie it to the community organizing group ACORN (which is a member of Election Protection) and, by implication, accusing Obama of trying to steal the White House.

Crist, though, isn't buying the party line on that one. "I don't think we anticipate much of a problem with voter fraud," he told reporters on a conference call organized by McCain's campaign Tuesday afternoon (which it probably regretted later). So far, the state government in Tallahassee hasn't moved to block a ruling that says voters whose I.D.s don't match their registration information can correct the problem in person on Election Day, rather than having to go to another office and fix it before their ballot is accepted. Perhaps as a result of Crist's calm, even McCain's die-hard supporters at a Thursday morning rally in Ormond Beach didn't seem too worried about voter fraud. Of course, that's a matter of degree; several insisted that Democrats always get away with some fraud, but they didn't expect things to be worse than usual this year.

If Florida were expected to go as easily for McCain as it did for George W. Bush four years ago (if not eight years ago), the issue might not matter that much. But the more people who show up to vote, the better the night is likely to be for Obama. Democrats are paying close attention. "We have a chance this year, as a nation, to go past that horrendous 48 percent of eligible voters who participate in presidential elections, with the unprecedented number of young voters, independent voters, minority voters, that are participating in this," New Mexico Gov. Bill Richardson told Salon prior to appearing at an early-vote rally for Latinos in Kissimmee, Fla., on Wednesday. He noted that he's heard reports of rumors about voting problems among Hispanic communities in Nevada, Colorado and New Mexico as well. But, he said of expected record turnouts, "It's very healthy for our democracy, and we should take advantage of it, not engage in negative tactics and voter suppression."

Obama's most passionate supporters, meanwhile, say they're ready to show up no matter what they hear. "We're smart," said Sherrie Kendrick, a retired phone operator from Miami, who will turn 54 on Election Day. "We may not look it, but we're smart."