Men in blue in shades of gray -- this gritty movie rises above the standard corrupt-cop fare. 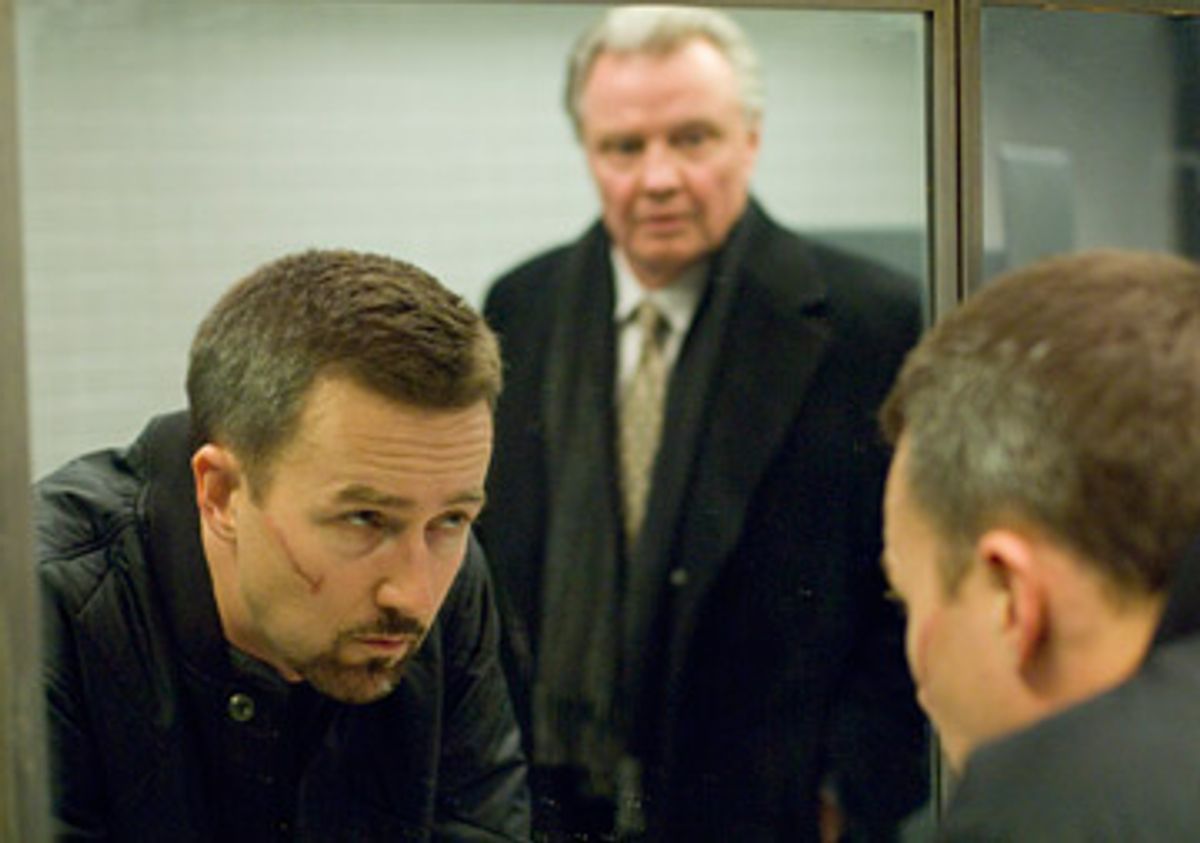 You've got to credit the "Pride and Glory" filmmakers for their chutzpah. To make a movie about cops and brotherhood and coverups and betrayal and violence is to open the floodgates of comparison to everything from Michael Mann to classic noir to Hong Kong action. Why mess with a genre already so familiar, so riddled with classics? And why open that movie nearly two years after its originally scheduled release date, a sure portent of cinematic lameness? Why not just do something less likely to inspire criticism, like run for vice president?

It doesn't bode well when "Pride and Glory" begins with as tired a setup as has ever been shot. At a muddy Brooklyn football game, a couple of cops sit in the stands, their breath clouding the cold air as they cheer on one of their own. Then, ominously, someone's cellphone rings. Cue sirens, blood, overlapping dialogue and dizzying handheld camerawork.

And then — whaddya know? — the movie gets pretty good.

It doesn't hurt that director and co-writer Gavin O'Connor and his brother, producer Gregory O'Connor, are the sons of a New York City cop. Even in the story's more bullet- and plot-hole-riddled moments, there's an intimate affection for the badge that transcends simple Hollywood archetyping.

When four cops are killed in a drug bust gone wrong, a family of police officers has to unravel who committed the crime — and who tipped off the murderer to the bust beforehand. Leading the investigation is Chief Detective Francis Tierney (Jon Voight, all sad eyes and gravitas). Under him are his successful, less-loved heir, Francis Jr. ("Little Children's" Noah Emmerich); his broody prodigal younger son, Ray (Edward Norton); and his temperamental son-in-law, Jimmy (Colin Farrell).

It isn't long before the evidence starts to point back to someone in the department, and solving the case may mean engulfing the whole force — and, worse, the family itself — in scandal.

It's a conflict as old as Greek tragedy (though with considerably more profanity here). When the elder Tierney solemnly intones, "We take care of our own" in his best bada-bing accent, it's hard not to wish a moratorium had been issued on the phrase somewhere around season 6 of "NYPD Blue." But Voight, to his credit, lumbers through the film with such a clear-cut case of good cop/bad dad that he manages to sell even his hokiest lines. As his conflicted, damaged sons, Norton and Emmerich, two of the most quietly reliable actors in movies today, morph from stoic to menacing to panicky with heartbroken aplomb.

Emmerich, with his pockmarked, everyman ease, is the linchpin of the story. Dealing with death, sibling rivalry and his wife Abby's (a bald, ethereal Jennifer Ehle) fatal cancer, Francis Jr. is not just a man with the weight of the world on his shoulders: He's the guy next door. And as the hothead who just happened to marry into the family, Farrell's Jimmy has a nervous snarl that's convincing even when the actor's American accent is not.

Unfolding on the contemporary, yet-to-be-gentrified streets of the Bronx, Brooklyn and Washington Heights, "Pride and Glory" has the grit of a movie 30 years its junior. The characters inhabit a world of seedy apartments, dirty streets and neon-lit bodegas that would make Carrie Bradshaw plotz. It's a city where cops are drug dealers and assassins for hire, where women are either suffering wives or drugged-out whores, and where a racially motivated protest or outright riot is never more than one messed-up, ill-timed move away. Toward the end, as the filmmakers scramble to tie things up in one tidy, gore-soaked bow, the movie deteriorates into a retro-tinged shambles. Intercutting between two equally ludicrous donnybrooks, it devolves from a dark Scorsese throwback into "The Warriors."

Yet though the film gets mired in its own mopeyness and its simplistic "Summer of Sam" depiction of New York City, it still packs satisfying surprises. There are haunting performances from minor characters as they plumb their own moral depths. John Ortiz, as an officer who's lost his soul, is particularly devastating. There are languid scenes of family life that give the film heart and meaning. And there are scenes of horrifying brutality mixed with startling humanity, as characters play fast and loose with their own karma. At times it's damn near unbearable, in particular when one character simultaneously coddles and threatens to torture a child, but that creepy dualism makes these men who they are. Are they good people who do bad things? Are they sadists hiding behind their families and their uniforms? Police may boast that they bleed blue, but what makes the characters in "Pride and Glory" real — and raises the movie above the standard corrupt-cop fare — is their capacity to live and die in shades of gray.