Where the road ends for John McCain

His Straight Talk Express bolted out of New Hampshire eight years ago. Now the candidate is running on empty. 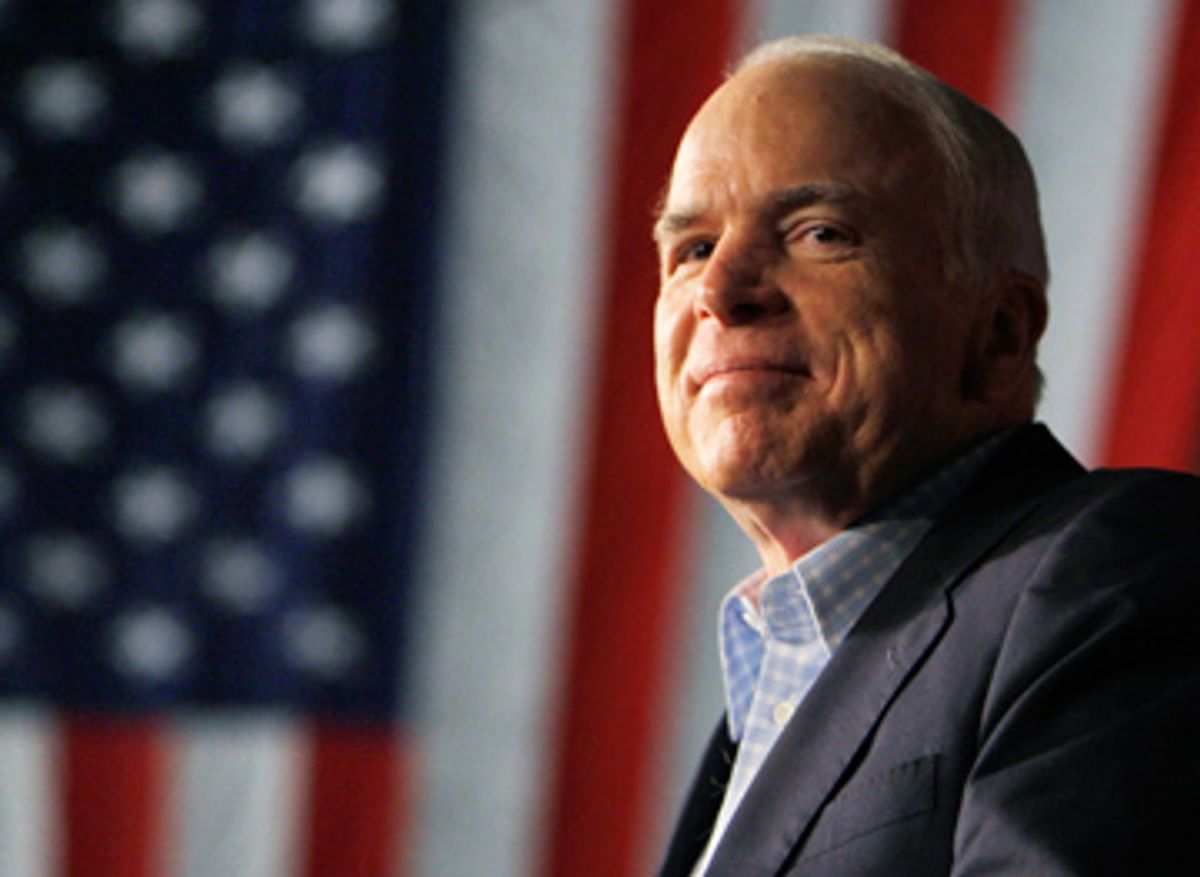 After being resurrected twice in New Hampshire primaries, John McCain finally appears to be running out of Granite State miracles. Fergus Cullen, the state GOP chairman, was trying to put the best possible face on a bleak political landscape here, when he said over lunch on Thursday, "McCain's doing his job keeping it competitive here in New Hampshire." It is telling when "competitive" is the most upbeat adjective that a party chairman can muster.

That verdict was offered before the Boston Globe released a New Hampshire poll Sunday, which showed Barack Obama leading McCain by a lopsided 54-to-39 percent margin in a state that John Kerry carried by just 9,000 votes in 2004. "What we've found is a depletion of enthusiasm among Republicans," said University of New Hampshire pollster Andy Smith, who conducted the survey for the Globe. "Some of the more marginal Republican voters are now not getting through the 'likely voter' screen."

With the press corps writing McCain's epitaph, why should New Hampshire and its puny four electoral votes matter? Until the Wall Street Whirlpool, this seemed like the 2004 blue state that McCain had the best chance of snagging for the Republicans. In fact, if Obama won New Mexico, Colorado and Iowa (all carried by Bush in 2004) while McCain prevailed in New Hampshire, it would produce a 269-to-269 tie in the Electoral College. But that scenario seems like a distant dream.

It's been more than a month since any New Hampshire poll gave the lead to McCain, although virtually all the other surveys show Obama ahead by single-digit margins. These numbers appear to vindicate the McCain campaign's decision to curtail its New Hampshire advertising. McCain did appear at a Manchester rally last Wednesday. He conjured up memories of his 2000 and 2008 primary victories, declaring, "I can't think of any place I'd rather be as Election Day draws close, than running an underdog campaign in New Hampshire."

McCain spent the weekend radiating all the signs of a candidate riding on a wing and a prayer. He spent a good chunk of his Sunday morning appearance on "Meet the Press" arguing with Tom Brokaw not about issues or Obama's record but the intricacies of polling methodology ("It all depends on the voter turnout model"). Campaigning in New Mexico Saturday, McCain mocked Obama for reportedly permitting his transition team to draft a first cut of an inaugural address: "I want him to save that manuscript of his inaugural address and donate it to the Smithsonian so they can put it right next to the Chicago paper that said Dewey defeats Truman." When a presidential nominee starts talking about that famously wrong 1948 Chicago Tribune headline, it is a sign as funereal as ending a rally with Dylan's "It's All Over Now, Baby Blue."

Symbolism -- rather than outlandish Election Night scenarios -- explains the enduring fascination with McCain and New Hampshire. This is where the Straight Talk McCain myth was born in the 2000 primary, as an avalanche of independent voters carried the underfunded Arizona senator to a landslide victory over George W. Bush. New Hampshire is also where McCain retreated after his front-runner campaign bandwagon crashed in the summer of 2007. Only after McCain defeated Mitt Romney in last January's primary did he regain his footing on the path to redemption.

Part of McCain's problem in New Hampshire is guilt by association. Bush's approval rating in New Hampshire has dwindled to near invisibility (20 percent) in the Globe poll. Embattled Republican incumbent Sen. John Sununu is running a television commercial that accuses his opponent, former New Hampshire Gov. Jeanne Shaheen, of lavishly praising Bush in 2002. While the Sununu spot is supposed to suggest that Shaheen is a political weather vane, it is nonetheless startling for a conservative Republican to portray a mainstream Democrat as the pro-Bush candidate. In the Globe poll, Sununu trails Shaheen by a hefty 49-to-36 percent margin.

Another reason why New Hampshire voters do not seem to be buying the McCain the Maverick brand is that the makeup of the state's electorate has dramatically changed since the 2000 primary. The University of New Hampshire's Smith estimates that 32 percent of the New Hampshire voters this November either did not reside in the state in 2000 or were too young to cast ballots. These recent migrants to New Hampshire, along with voters in their 20s, are significantly more likely to identify themselves as Democrats than the state's traditional voters. These demographic shifts help explain why the Democrats behind Gov. John Lynch swept the 2006 elections, winning control of the lower house of the Legislature for the first time since 1922, and defeating the state's two Republican congressmen.

But, in the end, what may matter most is that McCain has failed to run a campaign that appeals to New Hampshire's quirkily independent voters who prize bipartisanship, fiscal conservatism and social moderation. This is not a state apt to be won with Sarah Palin (a 39 percent favorable rating in the Globe poll) and scare tactics about Bill Ayers. Instead, this is the state at the beginning and the end of the road for the GOP nominee. John McCain's presidential dreams were born in the snows of New Hampshire in 2000 and almost certainly perished amid the autumn foliage eight years later.