In newly swinging Virginia, the GOP base showed love for their "true conservative" -- who may be eyeing the White House beyond McCain. 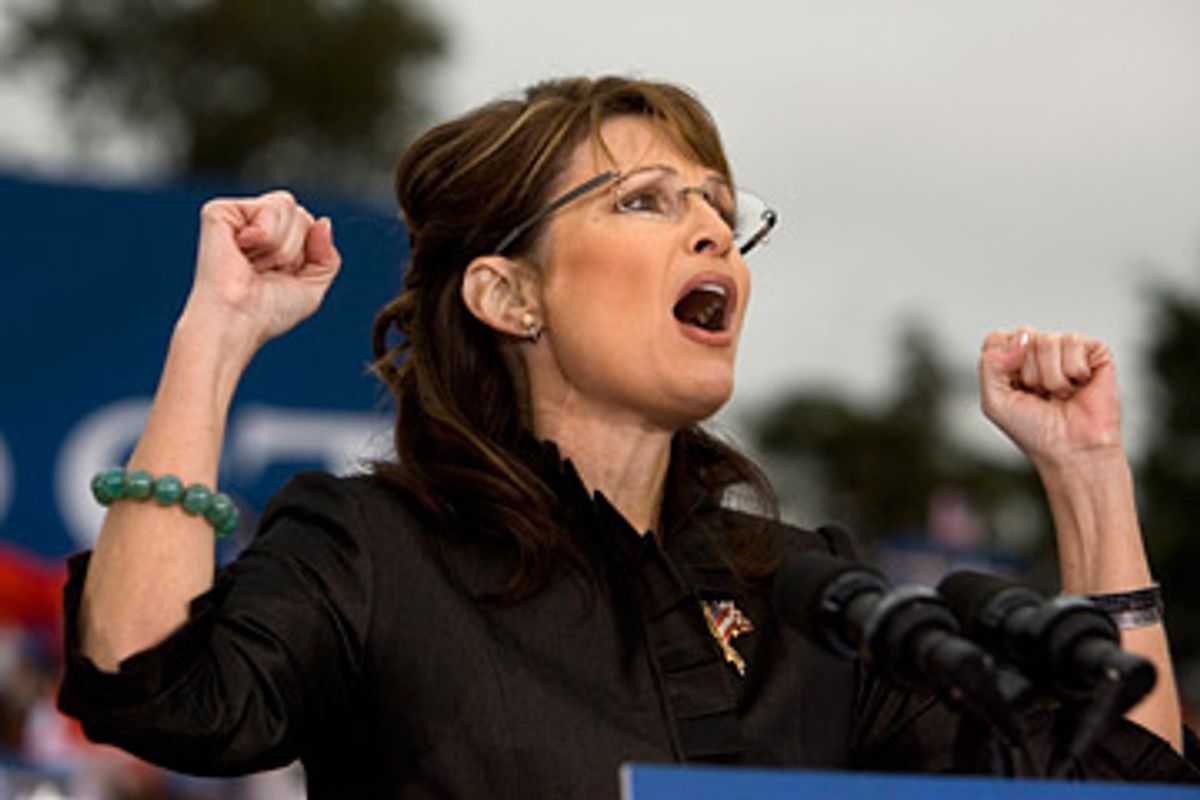 By the time Sarah Palin showed up here at J.R.'s Festival Lakes Monday morning (which "provides a heapin' helping of fun, food, and festivities for guests of all ages" when it's not hosting political rallies), the weather felt more like Alaska than Virginia, and the crowd of Republicans was waving little red pom-poms more to keep warm than to show their spirit. Two polls had already been published showing John McCain trails Barack Obama by 8 or 9 points in the state. And, not for the the first time in the closing days of the 2008 presidential campaign, the national press was filled with reports of tensions between Palin and McCain.

The trip to Leesburg was a perilous mission for Palin -- even beyond the ugly weather, the polls, and the $150,000 wardrobe story that refused to die (in part because she felt compelled to keep it alive on Sunday). After all, it brought her close to what at least one member of the McCain family believes is "communist country."

But Leesburg is really neither "real Virginia" or fake Virginia, but rather some kind of liminal Virginia in between. More exurb than country, even though longtime residents are struggling to hold onto a rural identity, the outer edge of the D.C. metropolitan area is the battleground region of a new battleground state. Loudoun County, where Leesburg is, split almost dead evenly between Jim Webb and George Allen in their Senate race two years ago; Webb won the county by less than 1,200 votes, out of about 80,000 ballots cast there. The people who came to hear Palin speak live close enough to Washington that they might even work there, but they're far enough away culturally that they roared when she asked them, "So, Virginia, will you hire us? Will you send us to Washington to shake things up?"

Increasingly, of course, it looks like Palin may not have the chance to do that after next week's election. And maybe not well beyond then either -- even some of McCain's own advisors admit privately to speculating about what Palin would need to do in order to put together a presidential bid of her own four years from now. Palin has been going off-script more frequently lately, pushing back against the Republican National Committee's decision to buy her clothing and complaining about campaign tactics and strategy in interviews with sympathetic conservative journalists and talk show hosts. (One senior McCain aide admitted to Salon that her deviations from campaign talking points had been noted, but "not in a way that caused serious heartburn for [McCain] or senior staff.")

If Palin is freelancing in an attempt to keep her political future alive past the campaign's Nov. 4 sell-by date, the answer may be just to keep doing what she's been doing. Those who aren't conservative true believers might find it puzzling, but Palin's crowds now are just as full of people who think she represents the Republicans' best chance as they were when she was first named to the ticket and was cracking jokes about pit bulls with lipstick. The Republican base still loves Palin, and if the media and the polls try to tell them other people disagree, well, that just makes them love her even more.

"McCain is not a true conservative," said Gracie Nelson, 58, an interior decorator from Leesburg, who felt strongly so even if she couldn't put her finger on exactly why. "The Republican Party has lost the true conservatism with McCain. I couldn't have voted for Obama -- I would have had to vote for McCain -- but when [Palin] came on and I found out what her values are, I think she energized the party." As far as Palin's fans were concerned, the recent controversies about her have been overblown. "It was the press being nasty again," said Melissa Glidden, a small-business owner and stay-at-home mom from Hamilton, Va., who brought her 16-year-old daughter, Calvert, to the rally. Glidden also stated matter-of-factly that Obama is "a Marxist or socialist" who wants to move America "more towards a failing European brand of socialism."

Both in the crowd and onstage, Obama's plan to redistribute wealth was the main theme of the rally, as it is at most of Palin's (and McCain's) appearances now. Over the last few weeks, McCain's campaign has morphed into a kind of populist storybook for small-business owners, a cautionary tale about the dangers of socialism, complete with affably named characters whose increasingly goofy-sounding names have come to symbolize the politics of taxation. "Joe the Plumber said [Obama's economic plan] sounded like socialism," Palin told the crowd. "And now is not the time to experiment with that. So a lot of folks around the country, they identify with Joe. And we see posters even here today -- we saw posters recently 'Doug the Barber,' and 'Christine the Florist,' and 'Cindy the Citizen.' We've got 'Joe the Plumber's Son,' 'Jack the Hunter,' 'Vickie the Realtor.' One of my favorites last night, it was 'I am Joe Momma.'"

So perhaps it was inevitable that Tito the Builder -- a Colombian immigrant, Tito Muñoz, who showed up at a McCain rally near here last week and started sticking up for Joe the Plumber after it was revealed he was a) not really named Joe and b) not really a plumber -- introduced Palin. He stayed around to offer up some press criticism for any reporters who would listen to it afterward. "Most of the media has been a little, kind of biased, and in that regard, I thought that going after Joe the Plumber's personality or his life was something shameful from the media," Tito the Builder said. "I think that was something you guys shouldn't have done. Because Joe the Plumber is not going to be our president. Joe the Plumber is just going to be Joe the Plumber."

Palin didn't stick around long to shake hands, pose for pictures or chat with well-wishers; her motorcade had to zip down the highway to Fredericksburg, in slightly redder Spotsylvania County, before winding up the Virginia tour in even safer GOP territory outside Roanoke. There aren't many days left for her and McCain to turn things around. They'll be reuniting in Pennsylvania on Tuesday, after a weekend that threatened to upset the happy picture the campaign is painting of a "team of mavericks" out to save America from Obama's nefarious economic plans (you know, to cut taxes on the middle class). In Leesburg, at least, Palin was firmly back on message. "What we believe in, John McCain and I, is what Ronald Reagan believed in," she told the crowd.

If you listened closely to the music before and after the rally, it was hard not to wonder if there was some kind of Freudian slip -- or secret message -- behind the selection of Dolly Parton's "9 to 5." Because while Palin's speech may have been that of a loyal running mate, the song's lyrics seemed to hint at a different story. "You would think that I would deserve a fair promotion," Dolly sang over the P.A. system as Palin took the stage. "Want to move ahead, but the boss won't seem to let me in. I swear sometimes that man is out to get me."