Watching for a Republican rout

Democrats are poised for another wave of victories in Congress. A guide to the key races, and GOP lawmakers on the run. 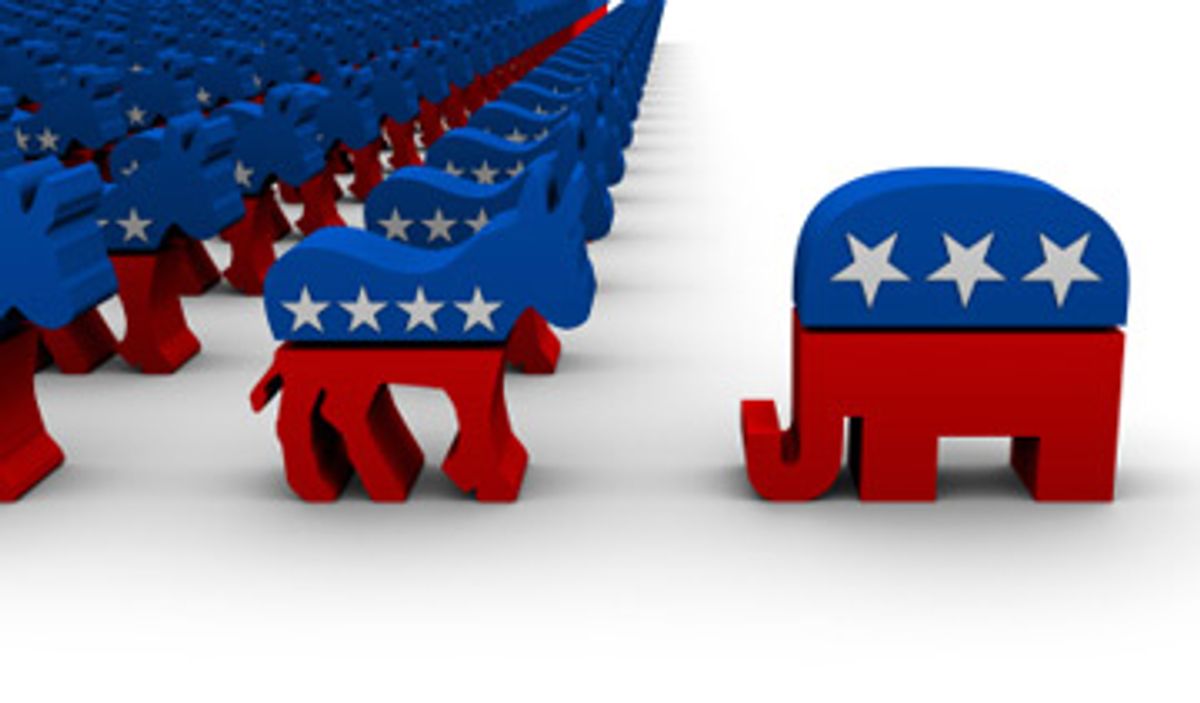 The last time Democrats moved into the White House after a Bush moved out was 1992. But looking ahead to next week's elections, the party's more optimistic operatives think the results could be more like 1932.

That year, Franklin Roosevelt swept into office, and along with him came 97 new Democratic House members and 12 new Democratic senators. What's remarkable about that, besides the staggering numbers -- a pickup of nearly 25 percent of the House in one fell swoop -- is that two years prior, Democrats had gained 52 House seats and eight Senate seats, as an unpopular Republican president dragged down GOP incumbents during tough economic times. (It sounds a little familiar, doesn't it?)

Those two cycles in the Depression era were the last time the country saw two Democratic "wave" elections in a row in Congress. More typically, after a midterm election like the one in 1930 -- or in 2006 -- a party gives back a bunch of the seats in the next presidential election, especially in the House; taking 30 new seats, as the Democrats did two years ago, means defending brand-new incumbents in districts that may lean Republican by nature.

Still, strategists in both parties, as well as independent analysts, expect the Democratic margin to grow again this year by at least 20 seats in the House. "You could tell me [Republicans would lose] 20 or 22 right now, and I'd say take it," one GOP consultant who's tracked House races said. Another Republican strategist said Democrats could pick up as many as 40 seats -- more than the 2006 take.

Barack Obama's impressive campaign surely deserves some of the credit, but some Republicans are pointing the finger at John McCain. One aide to House Republican leaders said they're forced to defend incumbent members in districts they never thought would be up for grabs. "Places Bush won by 20 points, John McCain is either barely winning, or losing," the aide said, pointing to areas like southern Virginia, northeastern Pennsylvania, all of Ohio and upstate New York (though not to specific districts). "Our presidential candidate is severely underperforming."

Meanwhile, Democrats are plainly on offense; the party thinks its candidates are competitive in more than 30 districts where McCain is ahead. At the Democratic Congressional Campaign Committee, staffers are trying not to sound too giddy ahead of time. But spokeswoman Jennifer Crider said the only thing holding them back from bigger gains was money. "If we had twice the money we had now, there would still be things we could be playing in," she said, even though the DCCC just took out a $15 million loan to go after more Republican seats. "There are so many opportunities out there, and we just can't afford them all."

In the Senate, the big question is whether Democrats can get the nine seats (or ten, if you don't count Joe Lieberman) to give them a filibuster-proof majority of 60. "It's hard," Chuck Schumer, who heads the party's Senate campaign operation, said in a Wednesday press briefing. It's lots of red states where the battles are playing out, he noted. But he said someone had asked him earlier in the week if he'd be disappointed to wind up with "only" 57 seats. "The last time we had 57 seats in the Senate, as Democrats, was 1979," Schumer said. In other words, make that a "no."

Asked if the Senate picture was any brighter for Republicans than the House picture, one GOP strategist flatly replied, "No."

Here, then, is a guide to congressional races to watch Tuesday night. Unless all the polls are way off base, it's going to be a pretty good night for Democrats in Congress no matter what. This is a primer for figuring out just how good they may have it.

Early results that could indicate a big night for Democrats
The House Republican aide suggested watching the presidential race for indicators on Congress: "If McCain loses Florida, North Carolina and Virginia, well, adios, it's a long night." But also keep an eye on Kentucky's 2nd District, where the Republican incumbent retired -- it's a race the GOP should be able to win unless the party gets swamped by the overall political climate. Maryland's 1st District is another possible predictor, as is the fate of Miami Republican Mario Diaz-Balart, who's facing a strong challenge from Democrat Joe Garcia.

In the Senate, if Democrats don't knock off Republican leader Mitch McConnell, in Kentucky, and Georgia's Saxby Chambliss, odds are against them hitting 60 seats; those results should be in relatively early.

Open Republican seats likely to flip
Even if the presidential race was a draw, Democrats would probably have picked up at least 10 seats left vacant by retiring Republicans, says David Wasserman, who tracks House races for the Cook Political Report. A total of 27 Republicans bowed out of reelection races this year, compared with only six Democrats. Democrats are considered very likely to win in places like Arizona's 1st District, where Rick Renzi retired under a cloud of scandal; New York's 13th District, where Vito Fossella's drunk driving arrest led to the disclosure that he had a whole second family in Virginia, unbeknownst to his wife and kids (and constituents) back in Staten Island; New York's 25th District, where Democrat Dan Maffei is a favorite to win a seat he just barely lost two years ago against James Walsh, who's retiring; and Virginia's 11th District, in the D.C. suburbs, where Tom Davis, the former head of the party's House campaign committee, retired.

The same goes for the Senate, where three very likely Democratic pickups will have come from Republican retirements: Virginia, New Mexico and Colorado.

Republicans in serious danger of losing
This list includes people like Florida's Tom Feeney (who was the speaker of the state House during the 2000 recount); Alaska's Don Young; Michigan's Tim Walberg and Joe Knollenberg; and Colorado's Marilyn Musgrave, long a heroine for the religious right for sponsoring the Federal Marriage Amendment to the Constitution. "You look at those tossup races, and if Musgrave wins -- if people like her who are already written off win -- then maybe you are looking at only 20 [pickups for Democrats]," one Republican strategist said. "Maybe it's a surprisingly good evening."

On the Senate side, this bunch includes Alaska's Ted Stevens, who was convicted of seven criminal counts on Monday. (A first rule of politics: It probably doesn't help your chances when the closing week of the campaign starts with a federal jury finding you guilty of anything.) In New Hampshire, Jeanne Shaheen looks like she's in good shape to win a rematch against incumbent Republican Sen. John Sununu, who beat her six years ago to win his seat. Hardly anyone who isn't on the payroll of North Carolina's Elizabeth Dole thinks she'll hold on to win, and Oregon's Gordon Smith -- a Republican, remember -- is in enough danger that he's been running ads linking himself with Obama since June. In Minnesota, Norm Coleman's race against Al Franken could be decided by how many votes independent candidate (and former senator) Dean Barkley is able to hold on to. "The wind is at our back," Schumer said. Democrats think their candidates are "significantly" ahead in five of the 11 competitive Senate races, and in six others either narrowly ahead, tied or within striking distance.

Republicans who could lose if the election becomes a rout
Some of these people can serve as early bellwethers -- if the ones on the East Coast lose, chances are they won't be the only ones in this group to fall. So keep an eye on Shelley Moore Capito, in West Virginia; Henry Brown, in South Carolina; Ohio's Jean Schmidt; and yes, Minnesota's Michele Bachmann, who was a long shot for Democrats to overtake until she declared on MSNBC that the media should investigate anti-American members of Congress. Since those remarks, national Democrats have dropped three-quarters of a million dollars into TV ads in the district, according to figures compiled by the Swing State Project blog. Chris Shays, a moderate from Connecticut, would fall into this category, too, as would Virginia's Virgil Goode. And finally, look at Arizona's John Shadegg, who holds the House seat that McCain used to launch his national political career. The DCCC has spent more than $2 million on that race, including a $580,000 media buy on Tuesday. "If people like that start going down, you're looking at 30-plus" seats for the Democrats, the Republican consultant said.

Senate seats in this category include McConnell and Chambliss, and probably Mississippi's Roger Wicker (though he may be more vulnerable than the others in this group, since he was appointed to fill a vacancy and is in his first election).

Democrats in danger
You can count the lawmakers in this category -- in both the House and Senate -- on your hands and probably still have a few fingers left over. Most of these members represent areas that McCain will probably win. "There's no question that if somebody's winning or losing in your district by 15 or 20 points, it's harder to make up that ground," said Democratic pollster Mark Mellman. Louisiana's Mary Landrieu is probably safe in her Senate seat, but keep an eye on it.

In the House, Republicans think they have a good shot at beating Pennsylvania Democrat Paul Kanjorski (who's being challenged by rabidly anti-immigrant Lou Barletta, the mayor of Hazleton, Pa., and a right-wing cause célèbre). In Texas, freshman Nick Lampson could lose his seat, as could Kansas' Nancy Boyda. John Murtha, who had to apologize last week for calling his own constituents racist, might be in trouble. And Florida's Tim Mahoney, who won his seat two years ago because incumbent Mark Foley resigned over sexually explicit messages he sent House pages, somehow managed to top that scandal -- or at least come close -- by allegedly putting one mistress on the government payroll, then firing her when she dumped him, and allegedly getting federal hurricane relief for a county where another mistress worked. He is not likely to be returning next year.