The culmination of a brilliant campaign, Obama's unequivocal defeat of John McCain marks a political and generational transformation. 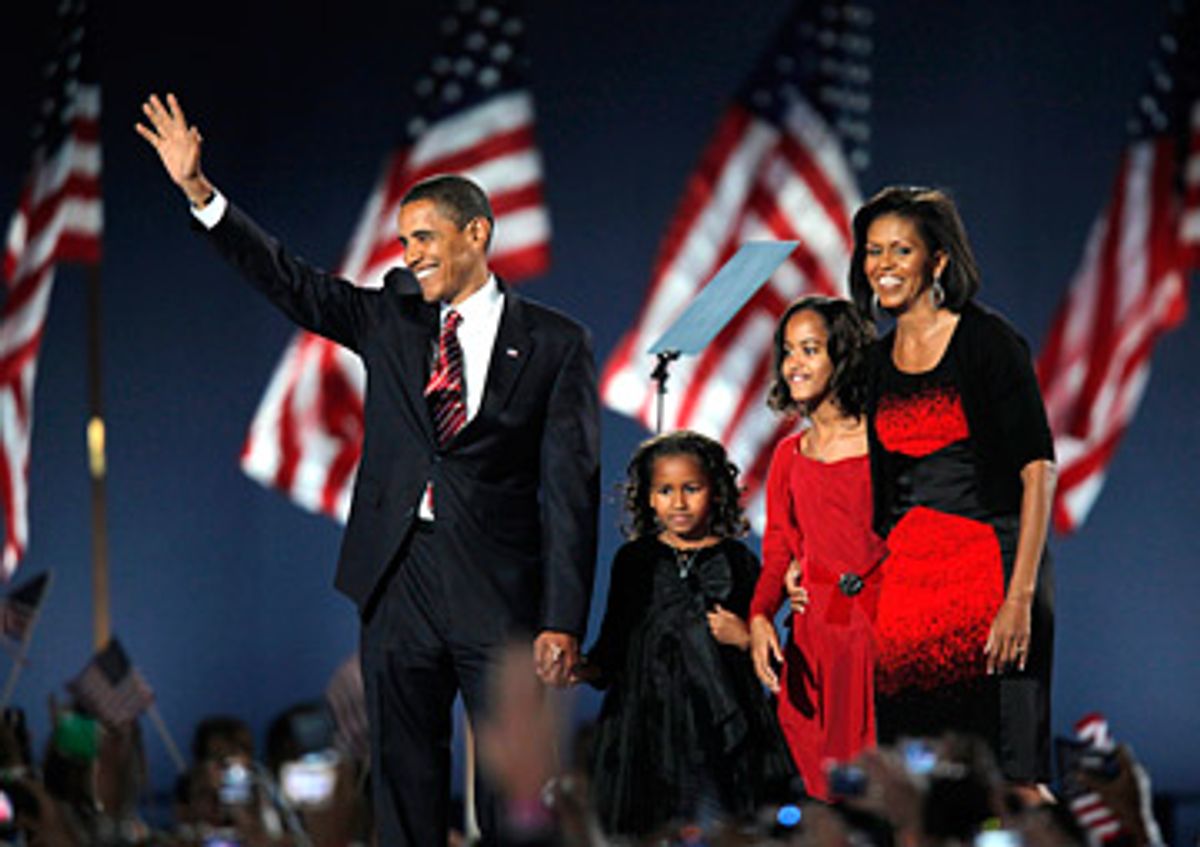 It took America 220 years to go from George Washington, a fourth-generation Virginian, to Hawaiian-born Barack Obama, the 47-year-old son of Kenya and Kansas -- and the newly elected 44th president of the United States. In just 11 weeks, Obama will place his hand on a Bible and swear to "preserve, protect and defend the Constitution." No president since John Kennedy or Harry Truman will come into office facing graver crises. Such is George W. Bush's sad-eyed legacy to his successor -- from the Wall Street meltdown to an overstretched military fighting debilitating wars in Afghanistan and Iraq.

But Tuesday night was a time of joy for Democrats and independents -- a glorious affirmation of America's capacity for rebirth as Obama rolled to an unequivocal victory over John McCain. With three states still undecided, Obama was guaranteed at least 349 electoral votes, winning a minimum of eight states carried by Bush in 2004 (Florida, Ohio, Virginia, Indiana, Colorado, Iowa, Nevada and New Mexico). The Democrats also picked up a minimum of five Senate seats, giving them a healthy (if not quite filibuster-proof) majority along with comfortable control of the House of Representatives.

In his outdoor victory speech before a rapturous crowd in Chicago's Grant Park, Obama erased the memory of Joe the Plumber by invoking a more powerful symbol of America: 106-year-old Ann Nixon Cooper, a black woman who Tuesday went to the polls in Atlanta. Employing his rhetorical power that can uplift and instruct, Obama used her life to summon up more than a century of individual Americans triumphing over economic adversity, world wars and the legacy of segregation. At each crossroads of this national journey, Obama repeated his campaign's refrain, "Yes we can."

McCain in a gracious concession speech returned to the bipartisanship that has often marked his Senate career, doing away with the harsh tenor of the closing weeks of the campaign that he waged along with Sarah Palin. The Arizona senator expressed the hope that the nation "would find ways to come together to find the necessary compromises to bridge our differences." While McCain seems poised personally to practice the politics of the olive branch, his defeat may have moved the GOP further to the right, by limiting its base on both the electoral map and in Congress to the Deep South, the rural Midwest and the underpopulated Rocky Mountain states.

For all the obsession with Obama's racial makeup and alarmist theories about a hidden racist vote, it is quite possible that the 72-year-old McCain's age was more of a political detriment. The unprecedented 25-year age gap between the two candidates gave fresh meaning to JFK's 1961 inaugural declaration that "the torch has been passed to a new generation."

Tuesday was the night that the 1960s -- the divisive decade that defined American politics for 40 years -- finally died. Obama first won his party's nomination by defeating Hillary Clinton, the emblematic liberal baby boomer, in the primaries. And on Tuesday night he defeated McCain, who owes his political career to his suffering and bravery as a POW in Vietnam. The raucous Obama victory rally in Grant Park was the capstone of Democratic strength through unity. The riotous antiwar rallies in Grant Park during the 1968 convention and the brutality of the police truncheons accentuated the cultural fault lines in the Democratic Party that contributed to 28 years of GOP control of the White House, from Richard Nixon to George W. Bush.

It was poetic in a sense that McCain grimly awaited his electoral fate in the Barry Goldwater Suite at the Arizona Biltmore Hotel, the site of Goldwater's 1964 concession speech. It was from the ashes of Goldwater's defeat that the modern right-wing Republican machine rose like a phoenix. Instead of "the conscience of a conservative," this was brass-knuckle politics that owed more to wedge issues -- from crime (Nixon) to Swift boats (Bush) -- than principle. But this was an election in which cries of "socialism" and the dread specter of that 1960s figure Bill Ayers failed to sway swing voters in the Midwest and traditonal Republican bulwarks like Virginia.

Every time the lease on the White House shifts party, the glib assumption is that America has changed. But this may have been the first election since 1964 when the Democrats could with justice imagine the world turned upside down. Yes, Jimmy Carter won the White House in 1976, but that was more a belated rejection of Nixon than a political sea change. It is now half-forgotten, but Bill Clinton owed a huge debt on Election Night 1992 to the presence of Ross Perot in the race. But as Obama declared victory shortly before midnight on the East Coast, he was poised to become only the third Democrat since Franklin Roosevelt to win the White House with more than 50 percent of the vote.

The financial collapse and the looming deep recession may well have meant that McCain could not have won the election even if he chose Adam Smith as his running mate. In each of the three major states that destroyed McCain's hopes of a last-minute reprieve from the electorate -- Pennsylvania, Ohio and Florida -- more than half the voters said that they were "very worried about economic conditions." (Most of the comparative optimists in the exit polls were merely "worried.") Among the "very worried" voters, Obama won 63 percent in Pennsylvania, 60 percent in Ohio and 59 percent in Florida.

This was also the election when Karl Rove's legacy of empowering the evangelical wing of the Republican Party may have permanently alienated upper-middle-class suburban voters from the GOP. Obama carried all four of the once reliably Republican suburban collar counties surrounding Philadelphia with a victory margin of nearly 200,00 votes. In Ohio, Obama ran up a 90,000-vote majority in Franklin County (Columbus and its close-in suburbs), turning what was until recently tossup country into a solidly blue part of the Democratic base. The Washington suburbs provided Obama with his victory margin in Virginia, a state that last went Democratic in 1964.

Obama's triumph was also due to the largest, best-organized and most energetic grass-roots campaign in American political history. In Ohio, for example, 43 percent of the voters said in exit polls that they were personally contacted by the Obama campaign, compared with 36 percent who heard from the McCain campaign. The question did not distinguish between door knocking (the Obama specialty) and robo-calls (which the McCain camp heavily depended on). In hitherto reliably Republican Indiana, a state where Obama eked out a surprising 23,000-vote victory, the pattern was even more exaggerated. Even though the Democrats had last contested Indiana in 1964, 37 percent of voters in the exit poll said they had been contacted by the Obama campaign, compared with just 22 percent for McCain.

This was an Election Night that brought with it few might-have-beens -- though nothing in the returns suggested that the Sarah Palin pick resonated with anyone other than the GOP's conservative base. John McCain was saddled with enough political troubles to rival Job -- a historically unpopular president of his own party, an economy that brought back memories of 1932 and war without end in Iraq and Afghanistan.

Barack Obama earned his ticket to the Oval Office by running a technically near-flawless campaign, dominating three debates and picking a vice president, Joe Biden, worthy of the office. It was, of course, Ronald Reagan's slogan, but as the sun comes up Wednesday on a land that has dramatically turned away from the Bush-Cheney years, it will feel for tens of millions like "morning in America."