Why Obama should end the "war on terror"

Bush's infantile response to 9/11 has harmed our national interests for too long. It's time to declare it dead. 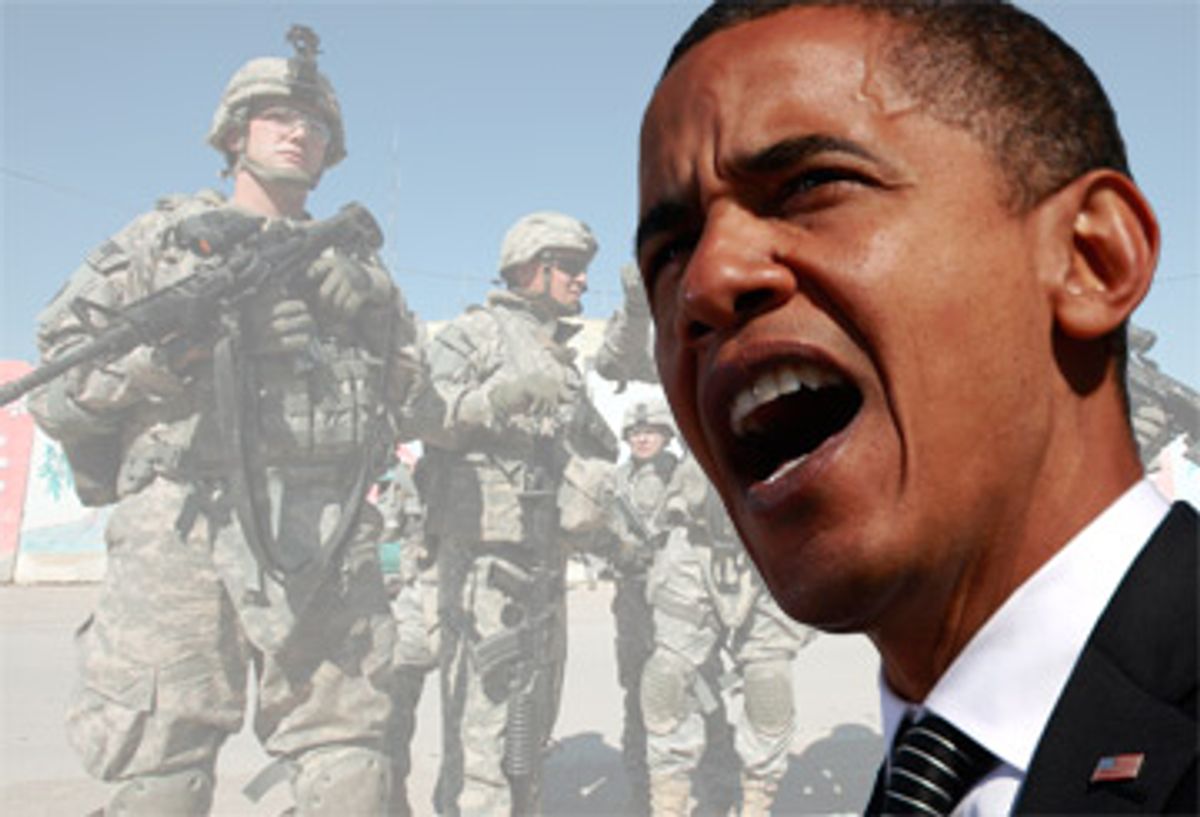 Barack Obama will confront a daunting list of priorities when he takes office on Jan. 20. Rescuing the nation's economy -- if there's anything left to rescue by then -- will obviously be at the top of the list. But it is just as important that Obama immediately declare an end to the "war on terror," and reverse all of the policies that have been carried out in its name.

George W. Bush's "war on terror" has been an unmitigated disaster. First, it is unwinnable. Terrorism is not an enemy. It is a tactic as old as humanity, and until the lion lies down with the lamb, it will continue to exist. Waging a war on terror is a category violation, like waging a war on violence. Second, it is self-defeating. By invading Iraq to preempt an alleged terrorist threat, the U.S. greatly increased that threat. And by elevating terrorist groups, which pose no existential threat to America, to the status of state actors, the Bush administration enhanced their prestige. The number of terror attacks around the world has risen greatly since Bush started his "war," and hatred of the U.S. in the Arab-Muslim world has metastasized.

In a subtler way, the "war on terror" has degraded our national psyche. It encourages the U.S. to remain in a psychological state that is simultaneously fearful and aggressive -- an infantile state, one that prevents us from thinking clearly about how to address our real foreign policy challenges. The U.S. is too powerful and self-confident to act like a three-year-old having a permanent tantrum. One successful terrorist attack, no matter how horrific, should never have led to a fundamental change in America's geopolitical strategy. A good general cannot allow his battlefield moves to be dictated by emotion, any more than a boxer can allow himself to drop his guard in a futile effort to land wild haymakers.

Of course, Obama should not abandon the fight against international terrorism, but adopt more effective tactics. He should treat al-Qaida and its ilk as criminals rather than armies. Quiet intelligence work, coordination with allies and law enforcement should be used as much as possible. There may be times when military action is needed, but it should be minimized because of its negative effects. Obama should make it a top priority to address the conditions that fuel anti-American hatred. In Afghanistan, this means rebuilding the country; in Pakistan, not propping up unpopular despots like Musharraf; in Israel and the Palestinian territories, throwing the full weight of American diplomacy behind a two-state solution. When it comes to fighting terrorism, America's most powerful weapon is not its army, it is its brain.

Fortunately, we are about to get a president who has a brain and is not afraid to use it. Obama famously said that he didn't just want to end the war in Iraq, he wanted to end "the mind-set that led to war." And the ultimate expression of that mind-set is the "war on terror."

Unfortunately, Obama has given some mixed messages about whether he is going to end the "war on terror" and the wrongheaded policies that have resulted from it. His most troubling statements concern Afghanistan and Osama bin Laden. In his debates with McCain, Obama consistently charged that the U.S. had "taken its eye off the ball" in Afghanistan and had failed to make capturing or killing bin Laden its top priority. These arguments, while not untrue, implicitly legitimize the "war on terror," and simply critique Bush for fighting it in the wrong way.

Obama's proposal to escalate the U.S. war in Afghanistan, though qualified by his greater emphasis on rebuilding the country, seems to indicate that he believes the Taliban can be defeated militarily. This is a recipe for failure: As former British Foreign Service officer Rory Stewart noted in the New York Times, the U.S. military buildup in Afghanistan has inflamed the Taliban resistance and made the situation worse. In a recent interview on "60 Minutes," Obama said he would make capturing or killing bin Laden a top priority, and he has threatened to strike terrorist targets inside Pakistan if the Pakistan government proved unwilling or unable to do so.

Killing or capturing bin Laden is obviously desirable. But as Mideast expert and Salon contributor Juan Cole has pointed out, achieving that goal may come at too high a price. A major U.S. military campaign in the tribal agencies on the Afghanistan-Pakistan border, where bin Laden is thought to be hiding, would anger Pakistanis and weaken the Pakistan government. It's not clear this is an acceptable trade-off.

Further doubts about whether Obama intends to fundamentally change Bush's foreign policy have been raised by his choice of Hillary Clinton as secretary of state. Clinton represents that sizable wing of the Democratic Party that went along with Bush's "war on terror." She voted to authorize force in Iraq, voted to declare Iran's Revolutionary Guards a terrorist organization -- a vote widely seen as giving Bush a green light to attack Iran -- and has been unswervingly "pro-Israel." (In fact, as the progressive American Jewish organization J Street has pointed out, "pro-Israel" politicians, invariably ones who toe the Israel lobby's line, are not actually acting in Israel's best interests.)

Despite these developments, there is still reason to believe that Obama's approach to fighting terrorism will be radically different from Bush's. He has consistently called for robust Mideast diplomacy, including talking with Iran. In a Washington Post Op-Ed, Brent Scowcroft and Zbigniew Brzezinski called for Obama to make resolving the Israeli-Palestinian crisis a top priority. Scowcroft, an eminent member of the realist wing of America's bipartisan foreign policy establishment, has advised Obama on national security issues. In general, Obama's Mideast views seem to track closely with the realist, diplomacy-driven policies recommended by the bipartisan Iraq Study Group, which Bush famously ignored.

As for Obama's hawkish remarks on Afghanistan, they were probably driven by political concerns. During the campaign, Obama needed to shore up his national-security credentials, and talking tough on Afghanistan, Pakistan and al-Qaida gave him a free chance to do so. (In one of the odder ironies of the campaign, McCain came across as more measured and diplomatic on Pakistan than Obama.)

To a lesser degree, the same thing is probably true of Clinton. Following the traditional Democratic playbook, she felt she had to lean to the right on national security issues, and some of her "pro-Israel" and anti-Iranian tilt can be explained by her perceived need to cater to her New York constituents. In any case, Obama likely realized the more hawkish Clinton will make a more effective, bulletproof emissary of change. Who better to get tough with Israel in negotiations than the woman who threatened to "obliterate" Iran if it launched a nuclear attack on the Jewish state? Nixon in China, meet Hillary in Jerusalem.

Finally, beyond political tea-leaf reading, there's the simple matter of effectiveness. Everything we know about Obama indicates that he is driven above all by pragmatism. His nuanced approach to America's economic crisis and his choices of highly experienced Washington insiders as his top advisors make it clear that he wants results. And the "war on terror" is simply not working.

There are dozens of reasons why it is not working, but the most important one is brutally simple: It is not in America's interests to have U.S. troops in Arab/Muslim countries. Whatever good they do -- and the U.S. troops in Iraq have done a lot of good -- is outweighed by the inadvertent harm they do, the ill will they engender and the insupportable burden they place on the U.S. economy. It was none other than Donald Rumsfeld who acknowledged this problem, when he famously asked, "Are we creating more terrorists than we're killing?" It has become increasingly apparent that we are.

Declaring that the "war on terror" was over would have immediate positive effects. Our European allies would rejoice. Al-Qaida, already so worried about the PR fallout from Obama's election that its number two, Ayman al-Zawahiri, ludicrously accused him of being a "house slave," would be further discredited in the Arab/Muslim world. It would be easier to begin negotiations with the Taliban and Iran. It would send a strong signal to both the Israelis and the Palestinians that America's new president is unequivocally committed to a two-state solution and is breaking with Bush's approach. It would make clear to the entire world, still reeling from the high-handed Bush years, that the real America is back -- an America strong and confident enough not to feel the need to swagger through the world smashing things.

Domestically, it would reenergize Obama's core supporters, who are growing slightly uneasy as he makes one efficient-but-Establishment move after another.

At the same time, Obama faces serious institutional and ideological obstacles to ending Bush's approach. The powers that be are loathe to admit that there are problems for which there are no military solutions -- especially with troops in the field. Patriotism, politicians' need to appear "tough," an unwillingness to admit that American lives were wasted and delusional hopes that victory is just around the corner make it hard for Obama to end the "war on terror" and the mind-set that led to it. In a larger sense, ending the "war on terror" means reappraising the entire vast American military empire, and the strategic and economic consequences of our role as global policeman. This is not just a change of tactics, it's a paradigm shift.

It won't be easy for Obama to make this fundamental change. But until he does, we will continue to thrash about -- and find ourselves sinking deeper into the Middle East quicksand.