Is Obama president yet?

And who's that other guy in the White House? As George Bush continues his vanishing act, Barack Obama steps into the spotlight, two months early, to calm a jittery nation. 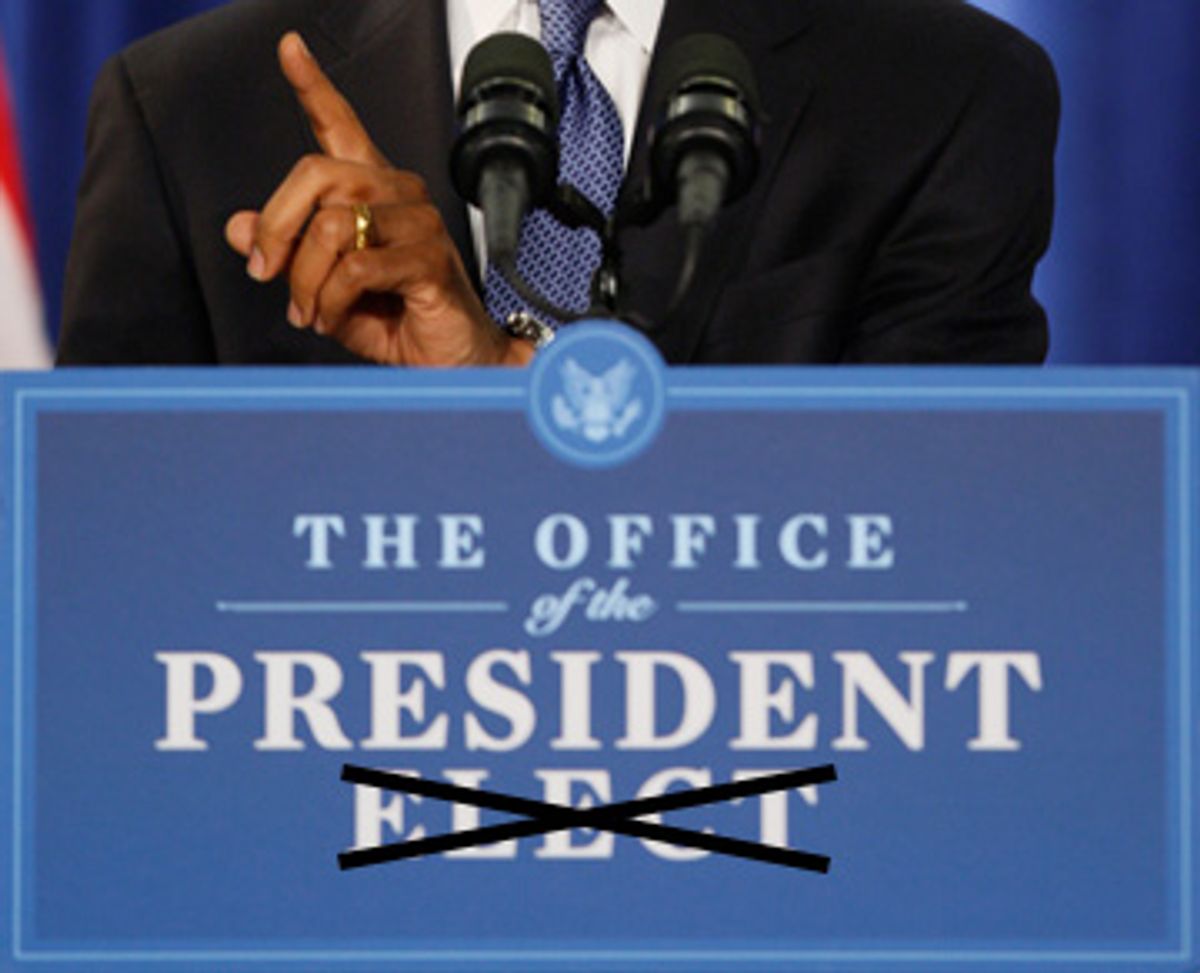 Yes, try though you might to forget it, George W. Bush is still president. His weekend trip to Lima, Peru, was the last scheduled overseas visit of his eight years in office -- and also about the most visible thing he's done lately. (Standing on the Treasury Department steps with Hank Paulson the morning after he returned, he didn't exactly make much news.) Bush vanished during the campaign, at the request of John McCain's aides, and hasn't really been back in the spotlight since. When he has emerged, during a time of economic crisis, to try to soothe the markets and the public, the results have been, um, counterproductive. His invisibility, and his failure to lead, have made the transition between this administration and the next that much more challenging for the man who's taking his job in less than two months. Without any of the power of the office, Barack Obama is already finding himself responsible for reassuring the nation about its future -- because Bush, apparently, can't.

"There is only one president at a time," President-elect Barack Obama said Tuesday, in a line that's becoming something of a mantra for him and his advisors. "That president is George W. Bush, and he will be president until I'm sworn in on Jan. 20."

The sentiment might have been a little more convincing, though, if Obama hadn't made that remark at his second news conference of the week; a third is scheduled for Wednesday, and at this rate, it wouldn't be entirely surprising if he popped up on TV to take questions between football games on Thursday. For 30 minutes every day, he's the virtual president. The transition team is trying for balance between getting ready to govern and respecting the guy who's (nominally) still in charge, but it's not an easy balance to strike: At this point in the Bush era, the number of people who wish Obama could simply take over already -- even suggesting, in the paper of record, that Bush just up and quit -- is growing faster than the number of Fortune 500 companies applying for federal bailouts. "It's not as if people don't know Bush is still president; this is not a mystery to anybody," said Democratic pollster Mark Mellman. "They just wish it wasn't so."

So Obama's team is consulting with the current White House frequently, especially on economic matters, in an attempt to be simultaneously deferential and prepared. Bush spoke to Obama Monday, before the administration committed billions to saving Citigroup. Obama aides advised administration officials that they'd be pushing for a stimulus package this week. But on other issues, the transition staff is giving Bush a wider berth -- Obama stayed away from the G-20 summit in Washington this month, and avoided getting mixed up publicly in the lame-duck session of Congress (though he did ask lawmakers to have a stimulus bill ready for him to sign by the time he takes office, and Democratic aides on Capitol Hill say they're already hearing from Obama's staff more than they do from Bush's). "People, and the market, are making decisions that go beyond Jan. 20," a senior transition aide said. "We're trying to send the signals [about the future] but not have any confusion about what's happening before Jan. 20."

The level of cooperation between the transition organization and the White House may be unprecedented, especially for presidents coming from different parties (and considering that Obama's entire campaign theme could basically be boiled down to, "Had enough of that other guy yet?"). Partly, that's because Obama's transition team started to plan for the changeover in August. "This is a very organized transition," said John Burke, a political science professor at the University of Vermont who studies transitions. "They were much more organized during the pre-election period than any transition that we've seen."

That planning took on greater urgency when the financial system nearly collapsed in October. "His feeling -- particularly as the fall went on and the deterioration in the economy grew -- was that there wouldn't be time to sit around, that it was going to be very important to be ready," an Obama campaign advisor said. The transition planning was cordoned off from the campaign strategy sessions, but once Obama won, it wasn't hard to start integrating the staff from the campaign with the staff that was already looking ahead to January.

If Bush wasn't the lamest of lame ducks, of course, it might be easier to manage the transition period. But since his little dance routine while waiting for McCain in March (ahead of their only lengthy joint public event together this year), the current president has been mostly missing in action. With approval ratings hovering around 25 percent, that's not entirely surprising; when only one in four Americans still likes you, how effectively could you push any agenda? But even Bush allies say he's left something of a leadership gap that Obama has little choice but to fill. "Part of the problem we've had with the financial crisis is we haven't had a visible leader of the country on economic issues for a long time," said Vin Weber, a former House member from Minnesota and now a Republican power broker who's in frequent contact with the White House. "We have not had -- in my judgment -- a national leader speaking to the economic crisis for months and months and months. Now we have a new president, and he can fill that void."

And at some level, even Bush's own aides may realize that. Weber said administration officials quickly got over an initial dust-up over leaks from the Obama team after the 43rd and 44th presidents met two weeks ago. Now the White House staff is "by and large very impressed" by the Obama transition operation, he said. (Thanks to a relatively orderly election, it's light-years ahead of Bush's own transition -- by this time in 2000, the Supreme Court hadn't even made Bush president-elect yet.) Obama aides say the same thing about the cooperation they're getting from Bush officials.

Of course, eight years is a long time for any president to stick around, even popular ones. But these past eight years have left most Americans with a particular urge to move on. "That sense of impatience on the part of everybody -- it's very strong this time," the Obama campaign advisor said. Fortunately, there are only 55 days left to wait for a change. And both Bush and Obama seem to be doing whatever they can to speed things along.