With warring sets of year-end indie awards on top of each other, who can keep track? We can! Here's who's in, out, hot and not at this very moment. 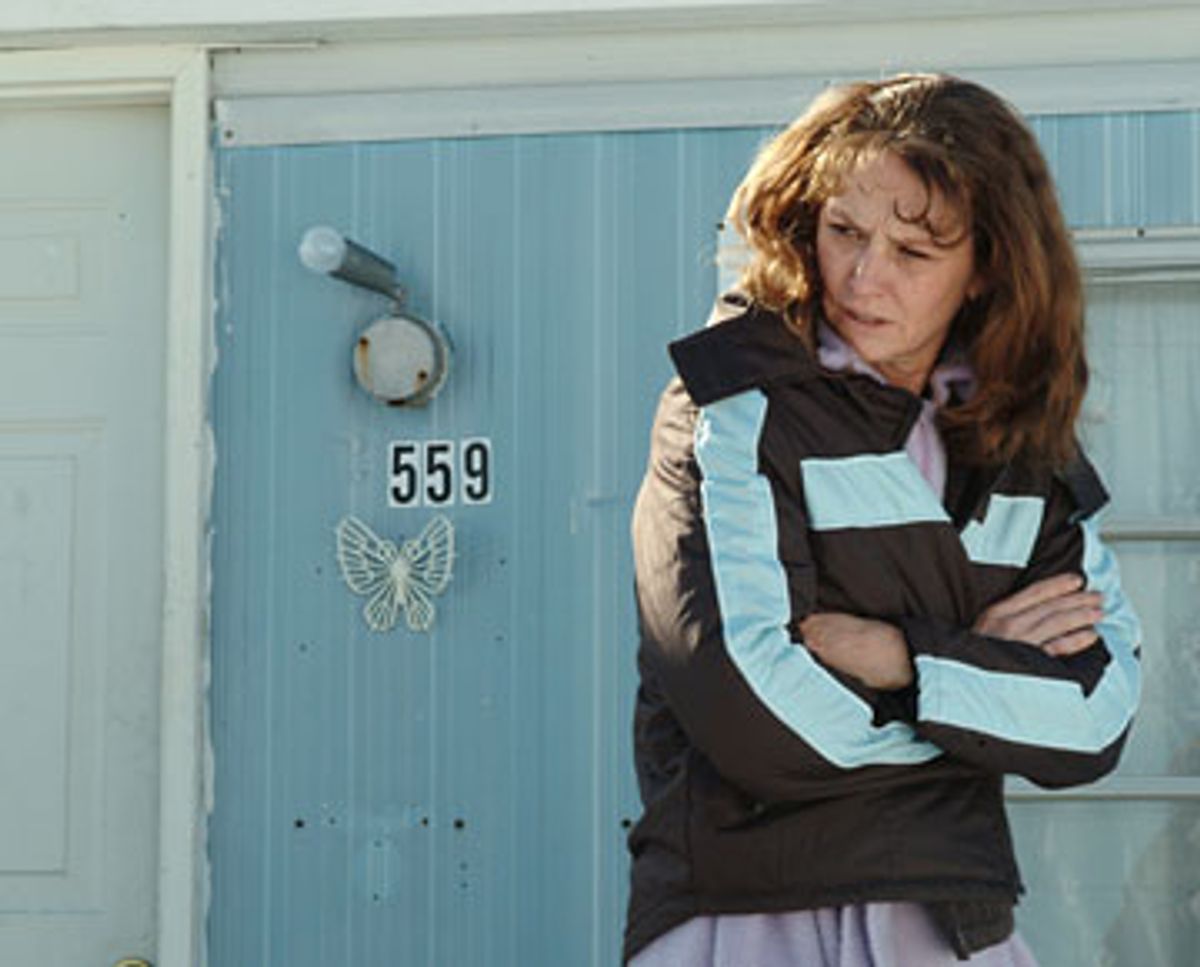 Melissa Leo, looking more and more like a plausible Oscar nominee for her role in "Frozen River."

There's nothing organizers of the two indie-oriented year-end awards -- those would be IFP's Gotham Independent Film Awards and Film Independent's Spirit Awards -- hate worse than being perennially confused with each other. So that's exactly what I'm going to do. Given that the two organizations' transcontinental rivalry has resulted in a train wreck of competing press releases this week, I'm guessing that your average entertainment consumer is even more confused than I am, if that's possible.

Herewith, some clarity. The Spirit nominations were announced on Tuesday morning in Los Angeles (with the awards ceremony to be held, as usual, on Santa Monica Beach one night before the Oscars). Then, on Tuesday night, the Gothams -- traditionally the kickoff event of awards season -- actually held their ceremony in New York.

Here's what you need to know about how the various categories shake out in both awards, and how this may or may not be shaping the contours of the Oscar race:

Meaning what, exactly? "Frozen River" continues to pile up prizes and despite its modest box-office returns now becomes visible as a possible Oscar candidate, especially for Melissa Leo's remarkable lead performance (on which, see below). It's certainly a surprise not to see "The Visitor" or "Synecdoche, New York" among the Spirit nominees. "Rachel Getting Married" and "The Wrestler" remain in the Oscar picture, most likely for acting prizes. "Ballast," a lovely film about which I had strongly mixed feelings, is feeling major love from the cinema cognoscenti, but it's just too marginal a picture to be in the Oscar mix. (Total gross to date is still under $100,000.)

Best director: The Gothams don't exactly have this category. The Spirit nominees are Ramin Bahrani for "Chop Shop" (quite possibly my favorite American film of the year), Demme for "Rachel Getting Married," Hammer for "Ballast," Hunt for "Frozen River" and Tom McCarthy for "The Visitor."

Meaning what, exactly? It's a strong group of filmmakers, even given my reservations about some of the actual movies. From this list, only Demme strikes me as a strong Oscar possibility; the Academy loves comeback stories. I'm grateful to see Bahrani here, as his tremendous little New York-neorealist picture got only one nomination (and no awards) from the Gothams. Look for Hunt to pile up more hardware on Spirit Awards night, but I don't actually see an Oscar nom in her future.

Best actress: The Gothams gives just one acting prize, the breakthrough actor award, which generally means either a debut performance or a first starring role. This year's prize went to Melissa Leo for "Frozen River." She was also nominated in the Spirits' female lead category, along with Summer Bishil for "Towelhead," Anne Hathaway for "Rachel Getting Married," Tarra Riggs for "Ballast" and Michelle Williams for "Wendy and Lucy."

Meaning what, exactly? Oscar nods for Leo and Hathaway are starting to feel more likely than not. Williams is absolutely terrific as the stranded hipster drifter of "Wendy and Lucy," and could provide the Academy with one of those what-the-hell choices. Like everyone else in "Ballast," Riggs is a nonprofessional actor whose performance is difficult to evaluate in conventional terms.

Best actor: The Spirit nods go to Javier Bardem for "Vicky Cristina Barcelona," Richard Jenkins for "The Visitor," Sean Penn for "Milk," Jeremy Renner for "The Hurt Locker" and Mickey Rourke for "The Wrestler."

Meaning what, exactly? A list with three, maybe four, plausible Oscar nominees and a total out-of-nowhere surprise. I had to look up "The Hurt Locker" on IMDB before recognizing it as Kathryn Bigelow's Iraq war movie, which played at the Venice and Toronto festivals but has no United States release date. Penn will probably grab this prize, but he'd better not spill Vichysoisse on his tux, because he's going to need it again the following night.

Meaning what, exactly? I'm not convinced about this many acting nods for Demme's film, which was tepid at the box office, but someone from that movie's female ensemble, most likely DeWitt, will be a supporting-actress Oscar nominee. Cruz stole all her scenes in "Vicky Cristina," but where's Rebecca Hall, who almost single-handedly made the film possess something close to substance?

Best supporting actor: Spirit nods in this category go to James Franco for "Milk," Anthony Mackie for "The Hurt Locker," Charlie McDermott for "Frozen River," JimMyron Ross for "Ballast" and Haaz Sleiman for "The Visitor."

Meaning what, exactly? As mentioned above, I haven't seen Bigelow's "Hurt Locker," but this seems like a weak list. Franco's the only plausible Oscar nominee, and I think we all know who's going to win the Academy Award in this category.

Breakthrough director/best first feature: Although the criteria aren't identical, these awards from the Gothams and Spirits, respectively, make a useful comparison. The Gotham's breakthrough director prize goes to Hammer, for "Ballast." (Hunt wasn't nominated in this category, and, come to think of it, I was on the committee that didn't nominate her.) The Spirits' best first feature nominees are heavy on unreleased films, including Antonio Campos' "Afterschool," Barry Jenkins' "Medicine for Melancholy" and Alex Rivera's "Sleep Dealer," alongside "Synecdoche, New York" and Christopher Zalla's '07 Sundance prizewinner "Sangre de Mi Sangre."

Meaning what, exactly? Well, nothing, at least in terms of the Academy Awards. It's a nice little boost for Campos, Jenkins and Rivera, each of whom was also Gotham-nominated. Look for the ambitious, YouTube-influenced prep-school drama "Afterschool" to be among the most-discussed films (if not necessarily among the most witnessed) of early '09.

Best screenplay: The Gothams don't have this category. Spirit nominees are Woody Allen for "Vicky Cristina Barcelona," Anna Boden and Ryan Fleck (they're the "Half Nelson" team) for the still-unreleased baseball flick "Sugar," Kaufman for "Synecdoche, New York," Howard A. Rodman for "Savage Grace" and Zalla for "Sangre de Mi Sangre."

Meaning what, exactly? Well, I must grumpily admit that Allen is back in the Oscar picture this year, probably in this category. Whether he deserves to be is quite another story. An Oscar nod for Kaufman is also possible, though not all that likely. Why are the Spirits nominating Boden and Fleck for this year instead of next, when people will actually have seen their (very good) movie? I'm delighted to see Rodman recognized on behalf of Tom Kalin's underappreciated "Savage Grace," which got eaten by the publicity around its subject matter (mother-son incest). Two Spirit noms is a nice consolation prize for Zalla, whose movie got almost no eyeballs.

Best documentary: The Gotham goes to Carl Deal and Tia Lessin's Sundance prizewinner, the post-Katrina odyssey "Trouble the Water." Intriguingly, it isn't among the Spirit nominees, which are Ellen Kuras and Thavisouk Phrasavath's "The Betrayal," Werner Herzog's "Encounters at the End of the World," James Marsh's "Man on Wire," Margaret Brown's "The Order of Myths" and Yung Chang's "Up the Yangtze."

Meaning what, exactly? Apparently Spirit nominators weren't swayed by the massive emotional payoff of "Trouble the Water" (as cinema, it's admittedly a bit choppy), but I still think it'll be Oscar-nominated, as will Herzog and Marsh's pictures. It's great to see "Order of Myths" here, since it didn't even make the Oscar shortlist and wasn't Gotham-nominated, although it sticks out for me as one of the year's best American films. I'd totally forgotten about "Up the Yangtze" as an award candidate, but it's a terrific choice.

Best foreign film: Notice that the Spirits don't call this category "foreign-language film," which explains the presence of Steve McQueen's "Hunger," a British-Irish production that's in English (insofar as it has any talking at all). The other Spirit nods go to Laurent Cantet's "The Class," Matteo Garrone's "Gomorrah," Abdellatif Kechiche's "The Secret of the Grain" and Carlos Reygadas' "Silent Light."

Meaning what, exactly? Not much, considering how weird and antiquated Oscar's foreign-film category is. As mentioned, "Hunger" isn't Oscar-eligible in this category, and "Secret of the Grain" and "Silent Light" were not submitted by their countries (France and Mexico, respectively). "The Class" and "Gomorrah" are in fact the French and Italian Academy submissions, respectively; both are terrific and likely to be nominated. I have no idea when a Palme d'Or film also went on to win an Oscar -- look it up for me, would you? -- but that seems probable with "The Class," a slice-of-life drama set in a Parisian inner-city high school.

Finally, although the Spirits' John Cassavetes Award -- reserved for films made for less than $500,000 -- has absolutely no Oscar relevance, all movie lovers should be grateful it exists. This year's nominees are Alex Holdridge's adorable L.A. slacker romance "In Search of a Midnight Kiss," Sean Baker's "Prince of Broadway," David Bruckner, Dan Bush and Jacob Gentry's horror film "The Signal," Sean Baker and Shih-ching Tsou's New York Chinatown drama "Take Out" and Chris Eigeman's "Turn the River." Yeah, that's the same Sean Baker, nominated for two different movies in the most über-indie category of all. Now that guy is cool.

Beyond The Multiplex Movies The Hurt Locker